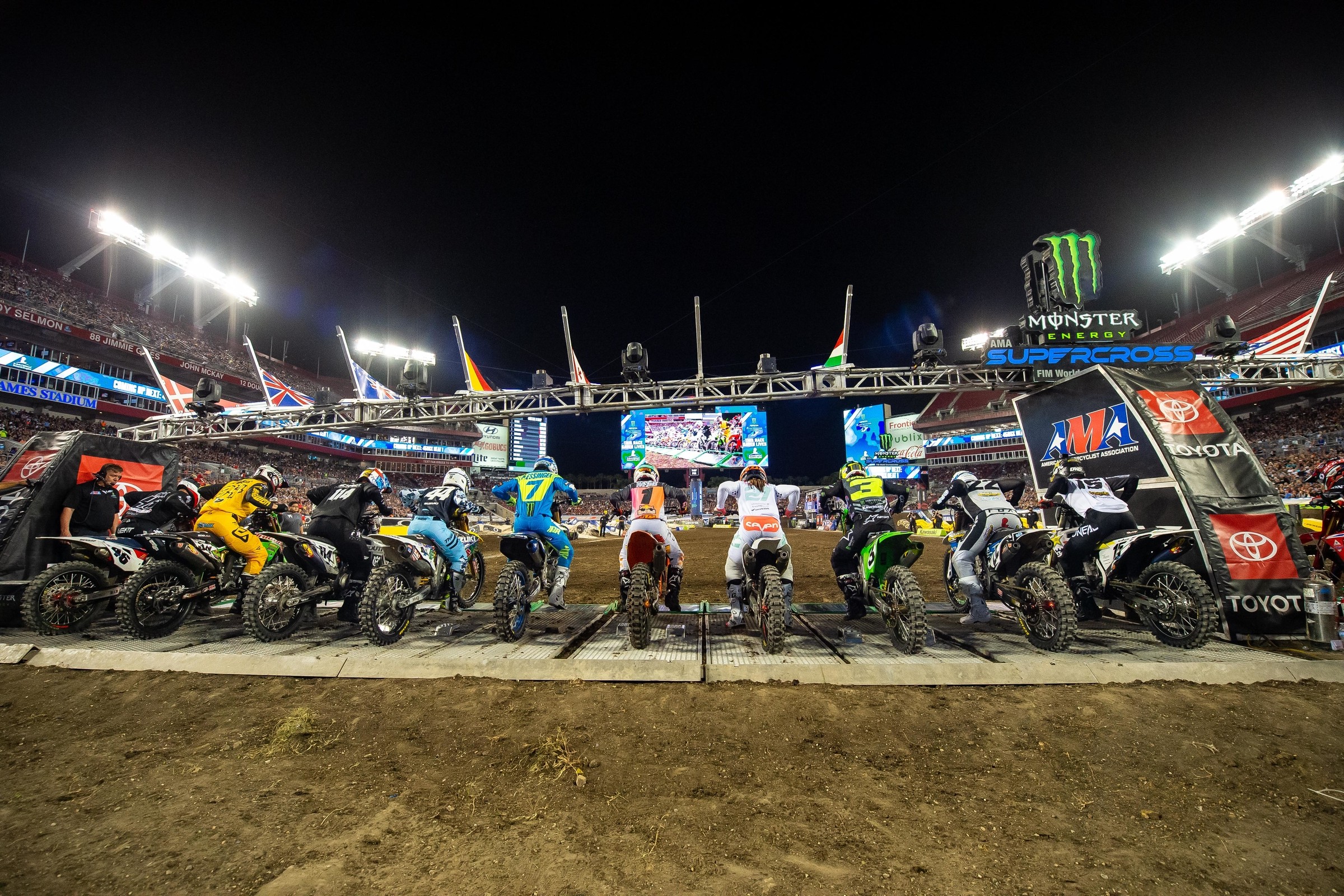 Arguably the nicest venue of the Monster Energy Supercross calendar, Jerry Jones’ AT&T Stadium welcomes America to Arlington, Texas. In true Texas fashion, the larger-than-life stadium has a little bit of everything. The massive jumbotron, the enormous party deck, endless concession options, and awesome Fan Fest all contribute to make this one of the most anticipated races of the year.

This year, Arlington was chosen to host one of three Triple Crown events, adding to the intrigue. These Triple Crown events have been very polarizing throughout the sport. Riders and teams collectively groan at the added work and costs associated. Many fans also prefer the longer 21-minute main event and the late race variables associated. Many other fans love the new format, though. With six starts that are all relevant to the championship, the action is constant throughout the night. There aren’t the long lulls that a normal format sees, forcing Feld Entertainment to create iffy entertainment to fill the time. The fans also get to see the stars racing more often and for longer than a normal race format would offer. Overall, I think the Triple Crown events have been a success, even if in a limited offering.

The track layout is somewhat similar to what we saw last weekend in Tampa. Different combinations, sure, but the flow and similarities are undeniable. The start is almost identical, flowing through the middle of the track in a long left. A short rhythm section greets riders immediately exiting the first turn and while difficult to see on the map, I think a quad might be in play. As riders’ step over the first tabletop, I think they will have a chance to quad all the way into the corner. Look for a net to be placed outside of the following corner, protecting riders that foul up the big leap.

A bowl berm sends riders into a dragon’s back and off, setting riders up for the only traditional triple jump on the Arlington layout. Stepping off the dragon’s back will be critical, otherwise the triple jump will be hard to make. Whether blitzing off or stepping up and off, screwing this section up could cost multiple seconds.

A 90-degree right following the triple mirrors Tampa here, setting riders up for a rhythm section across the width of the stadium. Tampa’s section had seven singles while Arlington will feature six. It will be interesting to see if riders can swing wide and go 3-3 but if not, they will stay inside to protect their line. That inside line would turn into either 2-2-2 or 2-3-1. Either option will most likely see riders again going to the inside in the following 90-degree turn to the right.

The next rhythm section has a few interesting possibilities. I think almost everyone will double out of the corner but that’s when things open up. Riders will be able to jump on-off or jump over the next few tabletop sections. I will be looking for someone to double out of the corner, then step over the first tabletop, then quad, triple into the next corner. They could reverse that ending and triple-quad into the corner also but regardless, look for riders to go big in this section.

A bowl berm sets riders up for the only whoops section but they have to hop up and over a step up first. Watch for who aggressively drives down the landing of the step up and who checks up. Whoops at the base of a landing require confidence to accelerate into. Forks will be compressed as they descend, not ideal for hitting whoops at speed. Riders will be leaning back, attempting to lift the weight off their forks and getting the motorcycle perfectly flat as they hit the first whoop. Riders like Malcolm Stewart, Justin Brayton, Adam Cianciarulo, and Blake Baggett might have an edge purely based on their whoop blitzing prowess. It will also be interesting to see how Cooper Webb’s recent improvements reflect in this section.

A 180 back down the start straight (backwards) fires riders into another quick 180. This entire section from the whoops to the finish line is nearly identical to St. Louis 2007. Riders will double into a tight 180 before doubling back out and heading towards the finish line jump. Riders will most likely use the berm to slingshot back out but look for a possible inside line to form here to shorten the race track. Landing down the finish line landing sends riders back into the first corner and the beginning of lap two.

After the opening 250SX East round, we certainly have more info to draw from. The real question for me will be if the surprise scorers from last weekend still have enough value to swing on them again. Riders like Joey Crown, Jace Owen, Hunter Sayles, Cedric Soubeyras, and Nick Gaines all came through but they all will be less valuable at Arlington after solid Tampa performances. With many of these riders dropping two spots in their handicap, I think they still can be great picks. Nick Gaines, for example, went from an eight to a six. I expect Gaines to finish somewhere in the 9-15 range on an average night. That still gives him good value and high upside, too. Be smart and don’t take a chance on Cedric Soubeyras this weekend. He’s racing in the UK and has to skip Arlington. Could make him a good pick for Atlanta next weekend.

The questionable calls come in for riders like Jordan Bailey, Jalek Swoll, Jimmy Decotis, and Josh Hill. Jordan Bailey had a tough day, tallying a 17th on his first race as a privateer. He is now a four handicap but what can we really expect from the Floridian?  There has been a lot of change in his program and the question becomes, “what is his expected range?” Is he capable of a top ten? If so, that four looks enticing. If he is going to be more in the 13-15 range, that four is much more dicey.

For Swoll, he narrowly missed the main event so his handicap has gone up. Being a Triple Crown event, I like his chances of going directly to the main event. That will eliminate that catastrophic DNQ from the equation but at a nine, there is still a chance of a low score if things go poorly. I like Swoll’s potential this weekend, but mostly due to his one-lap speed getting him into the main.

Jimmy Decotisfought through injury to steal a ninth at Tampa, but he is now only a zero handicap for Arlington. History tells us that he should be a top ten guy, but he isn’t leaving himself much margin for error at a zero. I usually like higher upside guys in the 250 class, so I will probably pass on The Rippahhh this week.

Josh Hill finished just inside his Tampa handicap (12th at a three) but I think he will improve this week. He hasn’t raced a 250 in a LONG time, so I think the rust will be less prevalent on Saturday. He is still a three this weekend but with my expectation of an 8-11 finish range, there is value here.

For the 450s, it was a fairly straight forward weekend. The highlights certainly had to include the return of Broc Tickle and Adam Enticknap making his first main event of the season. In fact, all of the HEP Motorsports Suzuki team found themselves in the main event, paying big points along the way.

For Arlington, I think there is value in going with a few factory riders and then strategically sprinkling in a long shot or two. If Blake Baggett is healthy and ready to go, he will be on my team at a +1. Similarly, Zach Osborne’s struggles leave him with a high value +2. I can’t envision my team absent of those two unless there are injury concerns. Benny Bloss has high upside at a +10, Martin Davalos looks juicy at a +5, too.

The real question comes in how to extract the most points at a Triple Crown event. The field will be set, so there is no doubt about who will qualify and who won’t. Riders like Enticknap are guaranteed double points at a +13 if he qualifies. Even then, is he a better pick than Davalos? Enticknap’s ceiling is probably in the 19-20 range in this field. Davalos, on the other hand, could easily be inside the top ten. At first glance, most teams will go highest handicap immediately but I think there is hidden value with some of the less obvious choices.

Tony Alessi denies all implications that he bangs on trash cans when the gate is about to drop.

Eli Tomac is seen at a Dallas Mavericks game on Friday night wearing his own jersey.

Steve Matthes arrives to Arlington with a fresh “I’m with RJ” tattoo just above his buttocks.

After weeks of seeing Justin Hill brutalize defenseless Tuff Blox, followed by his brother Josh joining the fray in Tampa, Weston Peick heads down to the starting line to eviscerate any and all interested parties.

Cooper Webb wins Arlington for the second year in a row.