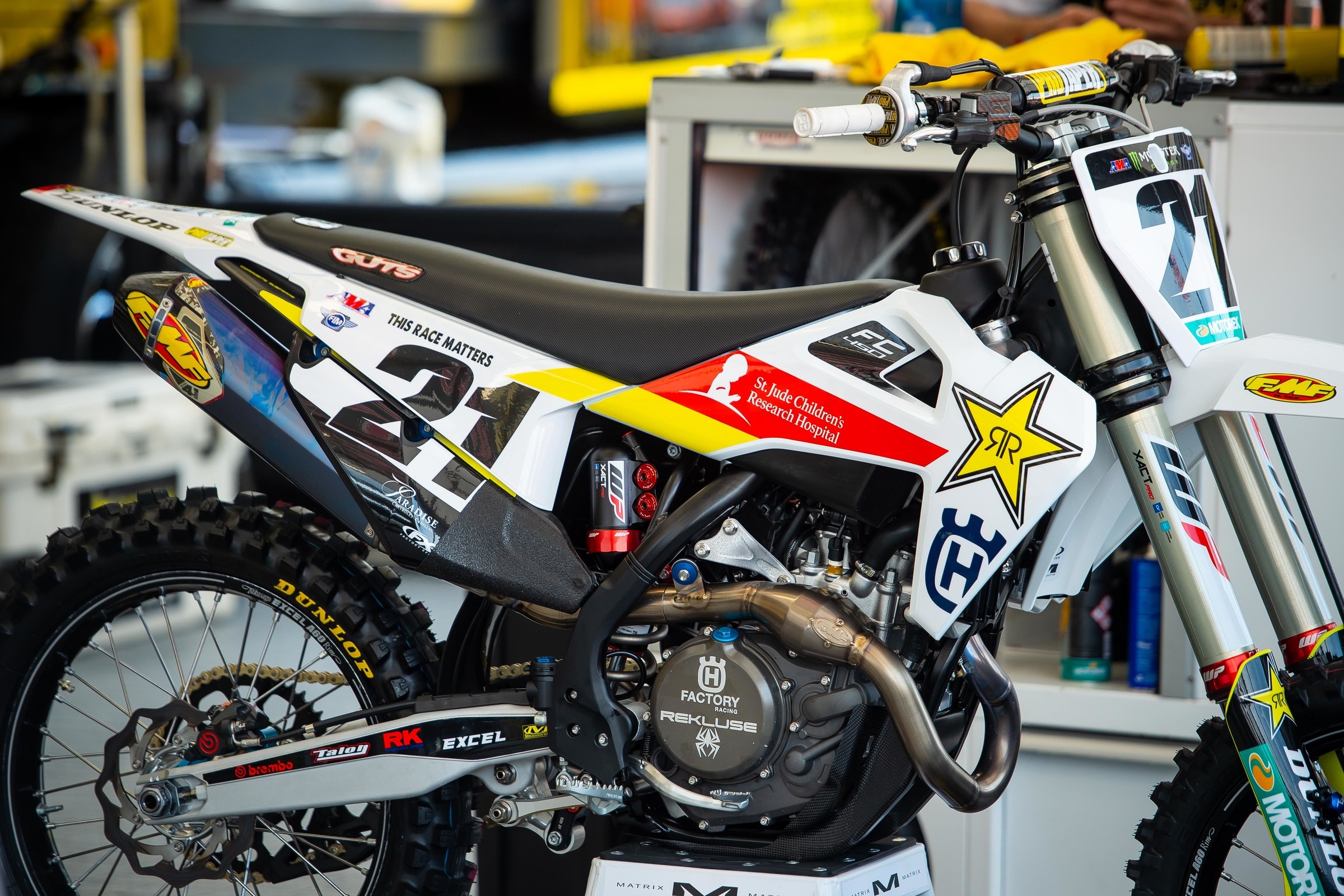 Redux News and Notes From Tampa

Monster Energy/Star Racing Yamaha’s Shane McElrath led all 19 laps of the 250SX main event before taking his first win of the year. It was McElrath’s seventh career 250SX main event win, his last came on January 19, 2019, at the Anaheim 2 Supercross when he finished 3-2-1 to take his first Triple Crown overall win. GEICO Honda’s Chase Sexton and Jeremy Martin finished second and third, respectively. Martin competed in his first AMA race since the Muddy Creek National on June 23, 2018, and his first AMA Supercross race since the Las Vegas Supercross on May 5, 2018—651 days or 21 months and ten days prior.

Josh Hill made his return to Monster Energy AMA Supercross as he competed in the 250SX class for the first time since the Las Vegas Lites Shootout on May 5, 2007— 4,669 days or 12 years and nine months prior to his return in Tampa. Hill finished 12th in the 250SX main event. Hill competed on a Yamaha YZ250F at both the 2007 Las Vegas Supercross and the 2020 Tampa Supercross but I’ll bet there’s a few differences between the bikes!

Broc Tickle made his return to racing after the completion of his FIM suspension from an anti-doping test failed in 2018. Tickle competed in his first AMA race since the 2018 Seattle Supercross on April 7, 2018—679 days prior to the Tampa Supercross. (Note: Tickle’s results from the San Diego Supercross on February 10, 2018, and any race afterward until his suspension was officially over on February 10, 2020, are supposed to be wiped from the record book, but as far as we can tell, they’re still there). Tickle, who was recently signed as a supercross-only fill-in rider for JGRMX/Yoshimura Suzuki Factory Racing finished 12th in his first race back.

After winning the 450SX LCQ, Chad Reed made his 255th career premier class main event start in Tampa before finishing in 19th.

Adam Cianciarulo led the first 10 laps of the main event before Eli Tomac took over the lead. He led the field the last 16 laps, eventually taking his 30th premier class victory. With his win, Tomac has taken the points lead from Ken Roczen and he will run the red plates on his background this coming weekend in Arlington.

Through the first seven rounds of the 2020 Monster Energy AMA Supercross Championship, Tomac (155 points) now has a four-point lead over Roczen (151 points), and an 11-point lead over Cooper Webb (144 points).

“I had a pretty scary crash in practice so it was good to walk away from that. My hand just slipped off the bar over the triple and I went flying. This track was a difficult track. I wasn’t expecting it to be so hard packed. We made some good changes going into the night, but I got another one of those bad starts in the Main. I was able to charge through the pack and got fourth place. My bike was working well on the track, it was awesome. It was hard to pass out there, but I was able to make it work. All in all, I gained some confidence going through the pack like that. I’m looking forward to being back at home this week before the next round in Texas.”

“Today wasn’t a good day. In the first practice I was 17th, in the second practice I was 12th, and in the Heat Race, I was sixth. The day wasn’t going my way. [The night show] was a step in the right direction for me. To go from being on the cusp of the top-10 to being in the top-five, it tells me that I’m doing the right things and the decisions that I make on race day are working. I’m trying to take control of my situations and get the most out of myself that I can get. I’m doing it within my means, and I want this to be a successful 17 rounds more than anything, more than a podium.”

“The Main Event went pretty good, I think it was a step in the right direction. It’s been pretty tough coming back from injury to a class that’s so stacked but I’ve been pushing through and it’s nice to see a half-decent result. I’m going to use this for next weekend and build off of it and keep it going.”

“I felt good for 15 minutes and then I hit a wall. It’s part of racing. I think there really is nothing to say. I just got tired out there. The good news is that it’s another race, we live to fight another day, and I ended up in seventh place. That’s another top-10 and I’m putting points on the board. I know that another opportunity is going to come and we’ll keep digging. We’ll go to Dallas and the Triple Crown, which should be a good race. I enjoyed being at home and having fun. I get to ride my track on Tuesday and I’m excited.”

“Malcolm finished seventh and showed a lot of promise tonight because he showed that he can get the start and run at podium speed for 75-percent of the race.”

“Man, I wanted that 1-2 Kawasaki finish so bad. I felt great all day long and obviously with it being somewhat of a hometown race for me I wanted to put on a show for my friends and family. Finishing in eighth is tough pill to swallow because we had that podium finish in our hands. My team and I have already made a plan on how to clean up these errors and will be ready to get our sprint on next week in Dallas for the next Triple Crown event.”

“My first race back in almost two years was filled with emotions. I’m very happy with how smooth and calm I stayed throughout the day," said Tickle. "I felt like I haven’t missed a beat overall being away. I will improve each week as a racer and get more comfortable. I want to thank JGRMX/Yoshimura/Suzuki for all the hard work over the last three weeks preparing for Tampa. I'm looking forward to getting more quality riding and training in this week to show up to Dallas a step better than this round.”

"It was a good weekend. We had a lot of excitement around Broc’s return to racing and he did great. It was impressive to see how fast he adapted to his RM-Z450 and he came out swinging. He had a great heat race, battling to finish fourth, and a strong main event ending in 12th. Broc had speed to be in the top-ten so that excites us for next week."

“I started the day slow and had struggles in the whoops and the sand during practice and the Heat Race. I pulled it together in the Main Event, pulled the holeshot, then rode solid for a good portion of the race. I had a couple of big bobbles in the sand that cost me a lot of time, I basically came to a dead stop and had to gather things up before I could get going again. I’m not pumped, but there were some good things to come out of it. I got my starts back and had a good pace in the middle of the race, but I just need to finish it off.”

“I felt good in practice, flowing well. In the end, the dirt was a lot different down here than what I thought it would be. I thought there would be a lot more ruts. I didn’t get great starts which cost me. And then me and the whoops weren’t getting along much today and I ended up going down there. When I got up, I was staying at pace with the guys at the front. I know the speed is there. I just need to put myself in a good position from the start. We’ll get them next week. I’m excited for the Triple Crown next weekend. It will be a good change.”

“It was a very frustrating day, I felt great every time I was on the track and I had a hard crash in the whoops on the final lap of the last qualifying session. All the scans came back good, so I’m gonna do what I can to be as healthy as possible for Dallas.”

“I was really hoping for a podium this weekend, but I made things a bit hard on myself when I started outside the top 10. Starts are going to be crucial next week with the triple crown so we’ll look to work on those this week to come better prepared. Overall still a good night and glad to be in the top 10 on such a tough track.”

"Well things didn’t go entirely as planned tonight. We obviously want to be competing for wins and podiums and anything shy of that is unacceptable. I felt like I struggled a bit to find my groove, but the good thing is this is only round one out of nine, so to leave here healthy and with a fifth-place finish is something we can build on. I am already looking forward to next weekend’s Triple Crown and getting another chance to compete.”

“I was pretty nervous coming into it. In the Main Event, I had a better start but I got caught up in the first turn. The opening laps were rough but once I got into a flow I was feeling the best I’ve felt all day. I made a pretty good charge but I crashed with two laps to go while going for the podium. We made a lot of improvements throughout the day and I think we’re in a good spot.”

“I think speed-wise I’m not lacking confidence at all, I just need to get myself in a better position moving forward. I was feeling really good in the heat race but an unfortunate mishap in the whoops caused me to go down and I banged up my clutch and bars a little bit so I ended up pulling off. That didn’t help me in the LCQ with a 26th gate pick. I got pinched off on the start and tried to come back to the top-four and it came down to the last corner and I just missed the last transfer position.”

The Troy Lee Designs/Red Bull KTM rookie suffered a hard crash during free practice Saturday afternoon at the Tampa Supercross. Read more on Moreau in this post that we will continue to update when more information is made available.

Although Bloss qualified 17th, did not start the night show due to a crash in the whoops during the finish of the final qualifying session. The team said Bloss “underwent scans and is good to go for next weekend in Arlington although frustrated he missed out on another night of racing.”

“Scans came back good, gonna do what I can to be as healthy as I can for Dallas,” Bloss said in an Instagram post on Sunday.

We’re hearing Baggett didn’t line up for the main event in Tampa after his neck and upper back spasmed upon returning to the team truck. He was checked out by doctors and is expected to race round eight in Arlington, Texas, on Saturday.

The Tampa Supercross was the official “This race saves lives” event of the year as riders created specific gear and graphics to display the Monster Energy Supercross-St. Jude partnership. Check out some of Align Media’s photos of the best St. Jude-inspired gear from the weekend.

Gif of the Weekend