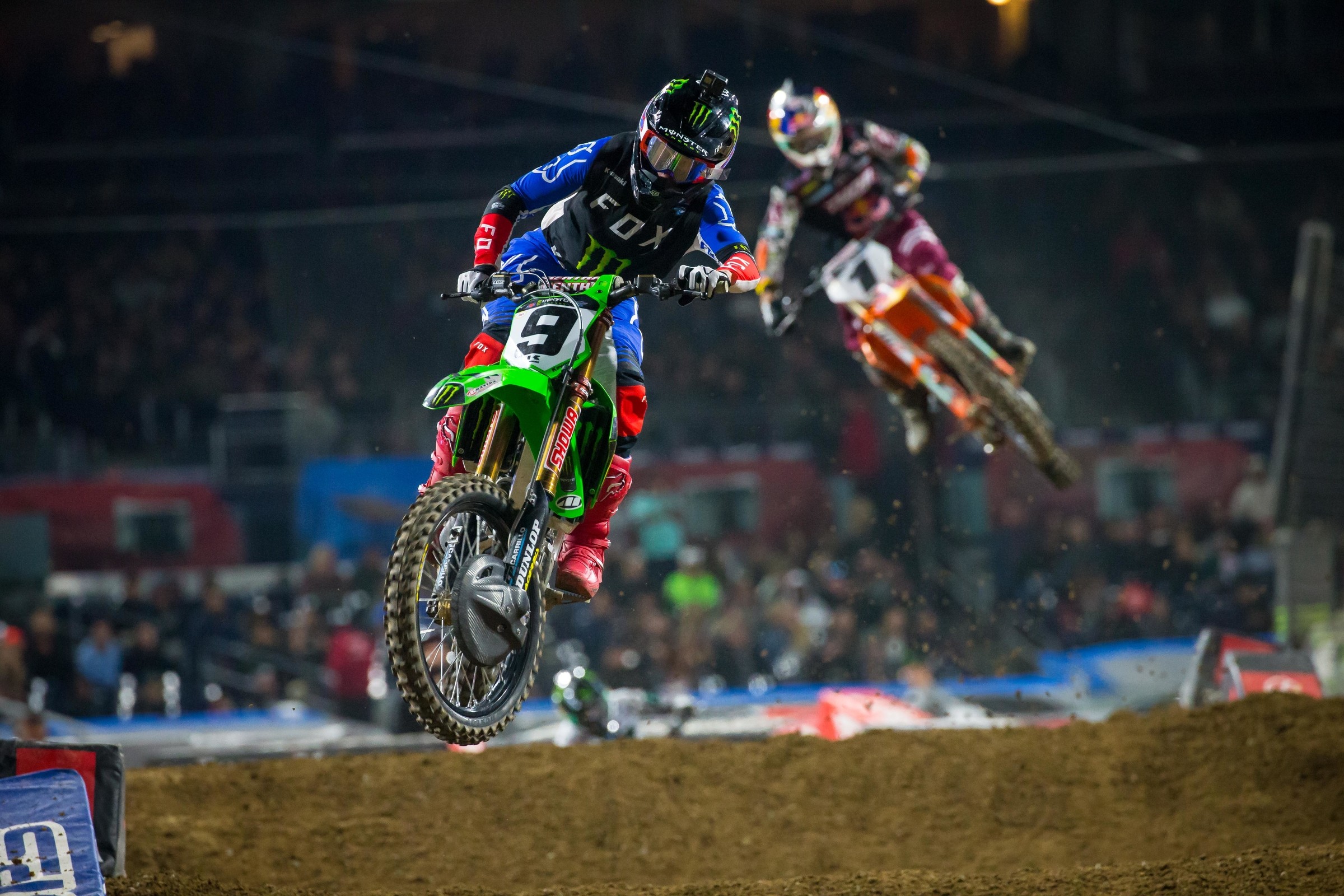 On the eve of Hollywood’s Academy Awards for movies, it seemed like some sorta special effects trick was at play at the San Diego Supercross on Saturday night. While battling for the lead, Cooper Webb and Adam Cianciarulo had engaged in a beautiful matchup of styles and strategies. Webb passed Cianciarulo on the first lap, but Cianciarulo struck right back. Webb gave him a run for a few laps and then settled in, readying another attack for the second half of the race.

Everyone knew that the whoops would tell the story. Cianciarulo, at 6'1”, is obviously comfortable in the traditional supercross style of blitzing over the top of whoops. It’s the fastest way when the track is at its best, and part of the reason why Cianciarulo has logged fastest-qualifying honors at all six Monster Energy AMA Supercross races this season. Blitzing whoops has been Webb’s biggest weakness in 450SX, which has hurt him in qualifying, but he’s continually moved to a jumping rhythm late in the main event when the whoops become so cupped out, edgy and hammered that blitzing gets scary. When the whoops are at their worst, Webb is at his best, which is what often sets up his late-race heroics.

Webb’s a determined sort, though, and while jumping whoops has bailed him out more than a time or two, he wants to improve his qualifying results, and reduce a major weakness when whoops do hold up all night (he was painfully slow through the whoops in Glendale, Arizona, the last two years). A hard week of testing with KTM clearly paid off, because Webb looked much, much better when the whoops were big and fresh in San Diego’s practice.

“I made it my mission this week to be the fastest guy in the whoops, and I feel like I’m competitive,” said Webb after qualifying. “I’ve been struggling there a lot. Gotta give it up to my team, they worked their butts off to figure it out. That’s my goal, to be the fastest guy in the whoops tonight. Back to back whoops, tough whoops, and P1. So, feeling pretty good. Gained a lot of confidence last week, and I haven’t finished P1 in a long time, so I’m ready to get it. Whoops have been a struggle for me, but we figured a lot of stuff out, and I’m feeling like my old self."

So Webb might be better at blitzing now, but as the San Diego track got chewed up, his jumping skills came back into play.

“He’s so good at jumping. I saw him jumping them (whoops) on the site lap and I was like, “aw, sh*t,” Cianciarulo told our Steve Matthes after the race.

“I sink into the first big whoop and then jump in, he kind of skims off the top of it (the first whoop) and that’s why he has so much momentum when he lands that’s why he can (jump) four,” Cianciarulo said.

Indeed, in the second half of the race jumping worked to Webb’s advantage. Cianciarulo gamely tried to adapt, even jumping himself a few times, but it was not as effective as Webb, who has usurped his injured teammate Marvin Musquin as the whoop jumping master of AMA Supercross. So, once Webb had finally made the pass and had the lead, Cianciarulo did what racers do: he planned to send it over the top of the whoops harder than ever, in hopes of blowing back past Webb. Hey, in most supercross situations, blitzing whoops might be riskier or more tiring, but it’s rarely slower.

Only, this time it was! Cianciarulo came into the first set of whoops at full commitment and blitzed like a boss, and yet Webb was triple-quadding his way through…and pulling away! This looked like a Hollywood CGI effect. We’ve been programmed to know that blitzing is faster than jumping. Jumping is a band-aid cure, a way to minimize risk and damage. It was alarming to see someone jumping and pulling away from someone who was blitzing. Somehow, Webb has turned a weakness into an asset.

“I felt like I was a lot better in the whoops, even though I went back to the jump line in the main,” said Webb with a laugh.

Remember that the supercross race format changed in 2017, resulting in not only longer main events in each class, but longer heat races and LCQs. As Webb commented a few weeks ago on the PulpMX Show, it doesn’t seem like that many more laps, but when you multiply each extra lap by 22 riders hitting every whoop every lap, tracks are breaking down more than ever.

Jumping could just part of the game now. The question is, will other riders begin to practice this technique?

“Skim for life!” joked Justin Brayton after the race. “I can’t get myself to do it.”

Jumping is not a normal experience for most riders, especially those with arenacross experience like Brayton and Hayes. Some riders are so good at blitzing that it’s doubtful they will change. Eli Tomac, Blake Baggett, and Malcolm Stewart, for example, are spectacular at blitzing. Baggett blitzed to the bitter end at San Diego, and he was fast the whole time. When Tomac had to resort to jumping at last year’s New Jersey race in East Rutherford, he crashed twice. To really practice what Webb is doing would require a test track with hammered whoops just like the night show at a race track. That’s very difficult to reproduce.

One thing will get reproduced, though: as the championship heads east, expect more tracks with softer dirt, and more rutted, beaten up whoop sections. Webb might have improved his game in qualifying, but in the latter laps of the main event, his jump man style might still be his greatest asset.