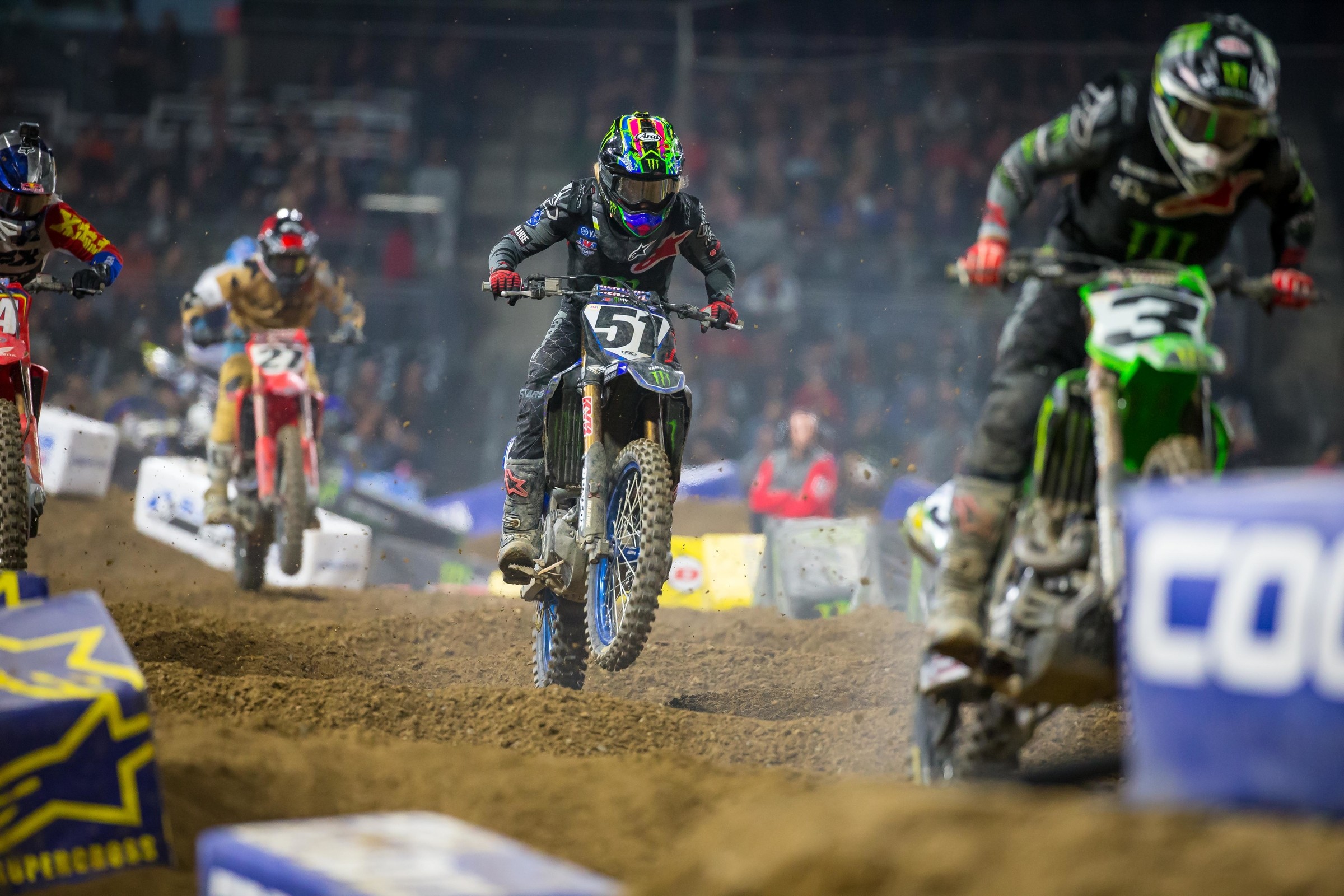 We fired some questions off to former pro Jason Thomas to get his thoughts on some of the key talking points from San Diego. JT discusses Cooper Webb's ability to jump through the whoops, close battles outside of podium positions, and more.

Cooper Webb said he would be better in the whoops and he was better there in practice. What do you think he could change or did change to make that happen?

I have always believed that setting a bike up for the whoops specifically compromised performance on the rest of the track. That setting usually involves going stiffer on the forks, sometimes stiffer on the shock and sometimes lower on the rear end of the ride height whether it’s via lower subframe, more sag, lower linkage, etc. Any of those typically lessen the ability to turn and aggravates riders on the rest of the racetrack. A winning combination involves a compromise. Finding a way to turn efficiently while also being able to blitz whoops when needed is the recipe for success. I don’t know exactly what changes he made but he certainly seemed more confident.

That said Webb returned to his old jump line in the main event. What needs to happen to a track to make the jump line work?

It’s really just a deterioration of the dirt and a “breakdown” of the whoops themselves. As riders repeatedly slam into them and their rear tire spins more and more dirt off the top of the whoops, that dirt typically falls in between the whoops. Also, each time the track equipment touches the whoops (3 times on Saturday), they become a little smaller and a little rounder. Jumping whoops is dependent on a smooth transition in between the whoops. That transition development is a fluid process. Early in the day, the whoops are taller and sharper, making it nearly impossible to get the motorcycle in between them. Webb and others like him are basically waiting the situation out. Sometimes, the whoops become jump viable by the heat races. Other times, it’s not until late in the main event. Being able to assess the track and know when that option has arrived is a skill that riders like Webb, Marvin Musquin, and myself, once upon a time, developed over the years out of necessity. It’s rare when a liability can become an advantage but in whoops like we saw last weekend, Webb used his skill masterfully.

Can you talk a little bit about the Tomac/Barcia/Kenny death match?

I don’t believe that any rider in the field enjoys close racing with Justin Barcia. Most riders know who they can trust and who they can’t. Riders like Ken Roczen make clean passes and always leave others room in a block pass. Riders like Barcia don’t. It’s just a difference in approach. It’s not up for me to decide which is right or wrong. Barcia has always been consistent in his style, so everyone just understands what is to be expected. I would bet most riders would roll their eyes if you asked them about Barcia’s race craft but in Barcia’s defense, he is riding within the rules. Tomac wasn’t happy with Barcia after the main event, which is the way most riders feel after dealing with Barcia for a few laps. I don’t think that will ever change so there’s no upside to complaining. The only real solutions are to either go faster and drop him or take Justin Brayton’s approach on Jason Anderson.

The obvious thing from the outside would be to think that Adam Cianciarulo just isn't as fit as Cooper, but we know there's more to it. Talk about the final five minutes of a long main event.

This was more about experience than fitness. Webb is one of the most skilled racers when it comes to a heads-up duel. Look at his late race prowess over the years and it’s evident that he excels strategically. He is great at anticipating what other riders will do and where they will try to defend. He wore Adam down a bit, assessed his strengths and weaknesses on that particular track, and attacked when he was ready. The whoops were the obvious difference and he was able to save both time and energy each lap. Adam was unsure whether to abort to the jump line or stick to blitzing, trying each multiple times. Adam is only six races into his 450 career and battling against one of the craftiest racers in the field who also happens to be the defending champion in his fourth 450 season. The whoops certainly played a big part in Webb’s win, but it was also a mental war in which Webb has much more 450 experience.

In the 250s, is this a matter of Austin Forkner needing to be better or is there nothing you can do? Is Dylan just too darn good?

On a track with whoops as tough as San Diego, Ferrandis is just better. As the whoops get worse, Ferrandis is able to keep his speed up where Forkner and others really start to show signs of struggle. It’s a subtle drop off but it’s there. In the heat races, Forkner seems to be just as good, blitzing across the new whoops with ease. As they get edgy and cupped out, though, Ferrandis shows his skill.

The thing to watch for is when the series swings back west, we will have a few rounds that weather could be in play. At Seattle, the whoops won’t be hard and difficult like San Diego. Vegas will play more into Ferrandis’ wheelhouse but Salt Lake is a crapshoot. Forkner has every aspect of his game ready for a championship but Ferrandis has proven to simply be better in the most difficult of whoops.

Is there a set of whoops on earth that Dylan can't handle?

Let’s not get carried away. He is racing a regional 250 series. Put him up against Roczen, Baggett, AC, Mookie, etc. in the whoops and it’s not going to look the same. Further, a 250 handles much better than a 450 in the whoops so it’s all graded on a curve for me. He’s been great but pump the brakes on him being Stew-like in the whoops.

How do you react to the night if you're Tomac and Kenny?

Neither would have left happy but Kenny would have been much more deflated. Tomac got stuck in Barcia-land and that really derailed his push forward. Both are still 1-2 in points but for Tomac, he was able to cut the deficit to 1 point and also pull away from the points leader in the race. It wasn’t a good race for Tomac, but he has to look at the silver lining of closing the points gap and being in a great position championship wise.

For Kenny, I think it’s best to just turn the page and focus on Tampa. He didn’t have a good main event for whatever reason. He rode incredibly well in his heat race but the main just didn’t work out. Whether mental, physical, or a wrong guess on a setting, dwelling on San Diego’s sixth place won’t help. Think on the positives (still the points leader) and much like Glendale’s bounce back, ride toward redemption.