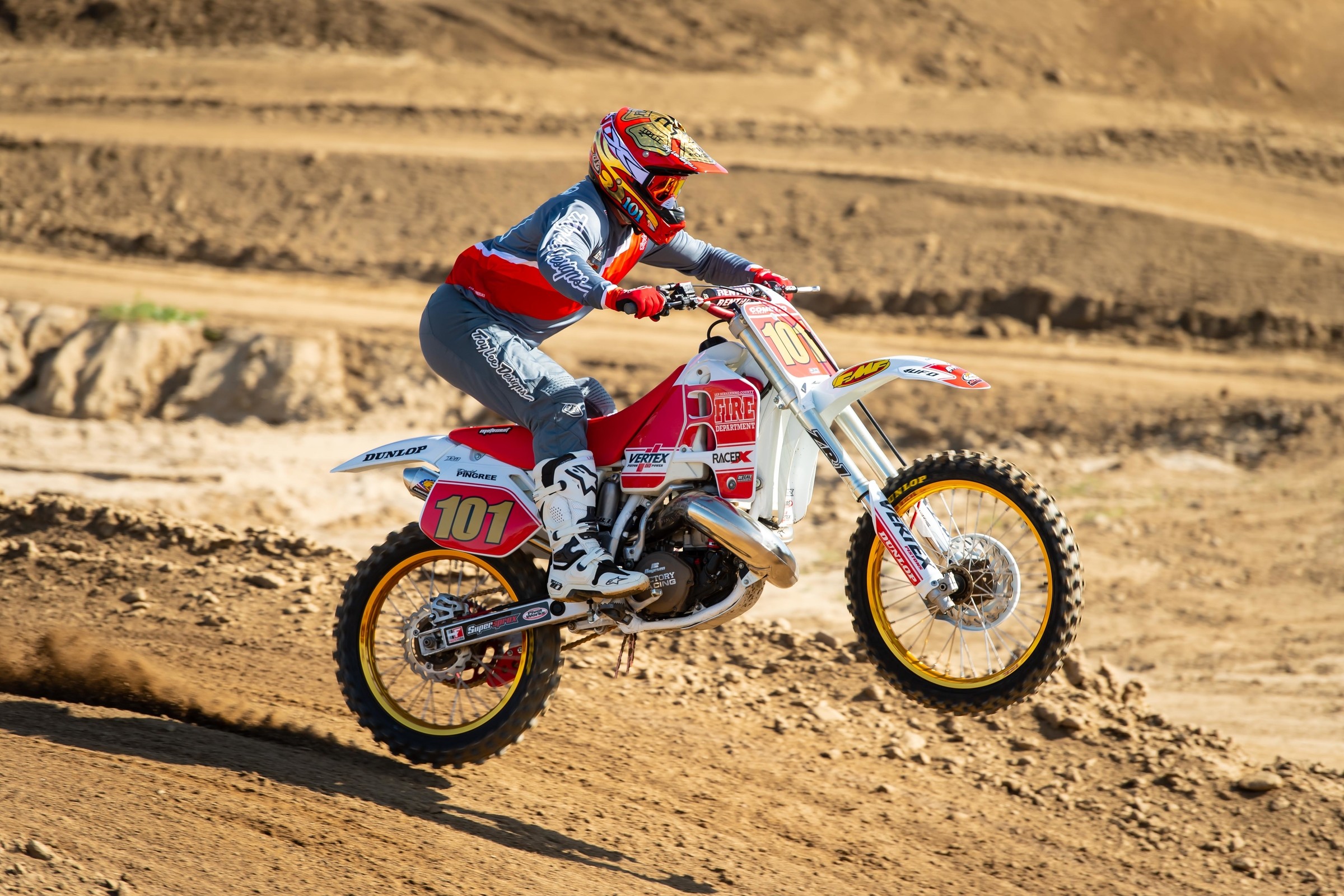 Like the sweet Honda CR500 Ping is riding in the main image for this post? Well you're in luck—the bike is being auctioned off through Road2Recovery. For more information on the auction, go to their website or go straight to the auction site.

I don't blame anyone for taking advantage of free stuff from companies and manufacturers etc. I would in their shoes. Listening to shows and podcasts and such, it seems like there is a lot thrown around. How does this affect the average Joe buying expensive bikes, gear, parts, etc.? For example, if a bunch of "industry" guys get free bikes from a manufacturer, and testers and magazines get free bikes (to test, I know they return them), yada yada, someone pays for it. I assume I am that guy. Does pro guy’s man friend get free crap from companies to keep pro guy happy? Can this or does this get out of hand? Listening to JT talking about the Fly Racing gear launch makes me think about how much money they just spent on that and wonder if the profit margin on some riding gear is that big that they have the margins to spend a lot of money on their industry people. I think Fly is a great company, just wondering how much product gets handed out and how that filters down to the consumer. Just something that's been bouncing around in the copious space in my head for a bit.

Thanks for the insight,
Jim

I can see where giving out free product to industry folks can be frustrating for those paying retail. And, to your point, it does get out of hand at times. I’ve seen plenty of industry “bros” get clipped for handing out swag to people who shouldn’t be getting free stuff. But companies, particularly brand companies [like Fly], have a marketing budget that includes these product giveaways. They rely on media and industry personnel to help them raise awareness of their latest and greatest stuff. It is often industry guys who test new products, do write-ups in magazines and on the web, and generally spread the word about new items. Successful brands are creative with their marketing projects… Fly’s summer camp is a great example of that. And if they didn’t spend that money introducing editors to the new products, they would spend it on some other marketing strategy. It’s the cost of doing business, Jim. Hope that helps. Hey, you want a great deal? For 99 cents you get three months of Racer X print and digital editions! Make your money back right there!

just wanted your opinion on these "VIP" areas now popping up at the nationals. With the new right hander off the start at Ironman, it opened up a new "Holeshot Club" right along the start straight, that included an old crappy set of bleachers, a fence, and a security guy making sure regular people couldn't enter without a wristband. So, in other words, I paid 180 bucks to get into the race. But they want even more money for these nice viewing spots. To me, it’s BS. I feel our sport is already turning into yuppie central with how expensive it is for bikes and entry fees. Now it’s getting that way just to see a race. With buying "Gold Passes" to watch every moto live, to "VIP" sections at the race, it’s taking the blue-collar middle-class aspect of what motocross used to be. I can see it for suites in supercross.  But now for the nationals?  C’mon, outdoors is where the real fans are, ones that still ride and race. We sit in the grass and dirt, stand out in the sun, or rain. Die hards.  Now where getting drained for more money, AFTER we already paid to get in. Curious as to how you feel.

How do I feel? How do I feel? I’m pissed! This crap is elitist, classist, racist, sexist, and all kinds of other “ists.” I’m outraged! Then again, I sat in one of these at the RedBud national this year and it put the FAN in fantastic. The catered food was amazing, the drinks were cold, the view of the track was unrivaled, and I didn’t have to deal with drunken asshats in cargo shorts and flip flops blowing their vape smoke all over me and ramping up for one more night of debauchery in parking lot B. Do I hate that there are two classes on an airplane? Sure. But once you’ve eaten a barely-edible meal while jockeying for the armrest with Diabetic Donnie and Obese Olga on either side of you, the extra $300 for the upgrade to a spacious seat seems like a better investment that Google stock during their IPO. National tracks offer plenty of locations to view from and if those with a few extra bucks in their pocket want to pay for some exclusivity, I’m all for it. After all, nobody is forcing you to pay for those areas. If you want to argue that there have been changes in the past two decades that have sent our sport in the wrong direction, generally speaking, you won’t get much pushback from me. But this VIP seating is a good way to get some folks to come to the races who otherwise wouldn’t. If you want to quietly heckle the dandies sitting in the VIP area as they sip their chilled White Claws, by all means, have at it. But let’s not pick that hill to die on… it’s not worth it.

I’ve finally realized that I’m never going to be a factory racer or win a plastic trophy from my local track. Therefore, I figured at the very least I can make my bike look stylish while getting passed. I took the initiative to remove the warning sticker on my rear fender to begin the transformation. After an hour of peeling the sticker off a tiny piece at a time, I started to worry that maybe the government that mandated the sticker was secretly tipped off that a removal was in progress. I started to panic, thinking up excuses I could tell the Feds when they showed up to my house. After much contemplation, I decided to blame it on my wife. Ping, do you think that’s a dick move or self-preservation?

Sincerely,
Poon in the Whoops

Listen to me: The government is not to be trifled with. That creepy pedophile who hanged himself while on suicide watch should serve notice that when a politician wants to make something happen, it happens. Was it Clinton? Trump? Doesn’t matter. Your wife is tough, she’ll be fine. I’ve heard women’s prisons can be, you know, “nice.” She’ll get three hots and a cot and won’t have to worry about manicures, pedicures, blow-outs, Botox, or any of that crap for a while. It could be cathartic for her. I say you’re doing her a favor… You’re welcome, sweetheart.

She’ll likely get five to ten. In the meantime, I’d head to Mexico and blend in like tequila in a margarita. Look into a poncho and a taco stand to seem more “local.” And for the love of all things holy, DO NOT remove another rear fender sticker, the tag on your mattress or the warning on the visor of your car under any circumstances. If the Feds find you, we don’t know each other. Vaya con dios, amigo.