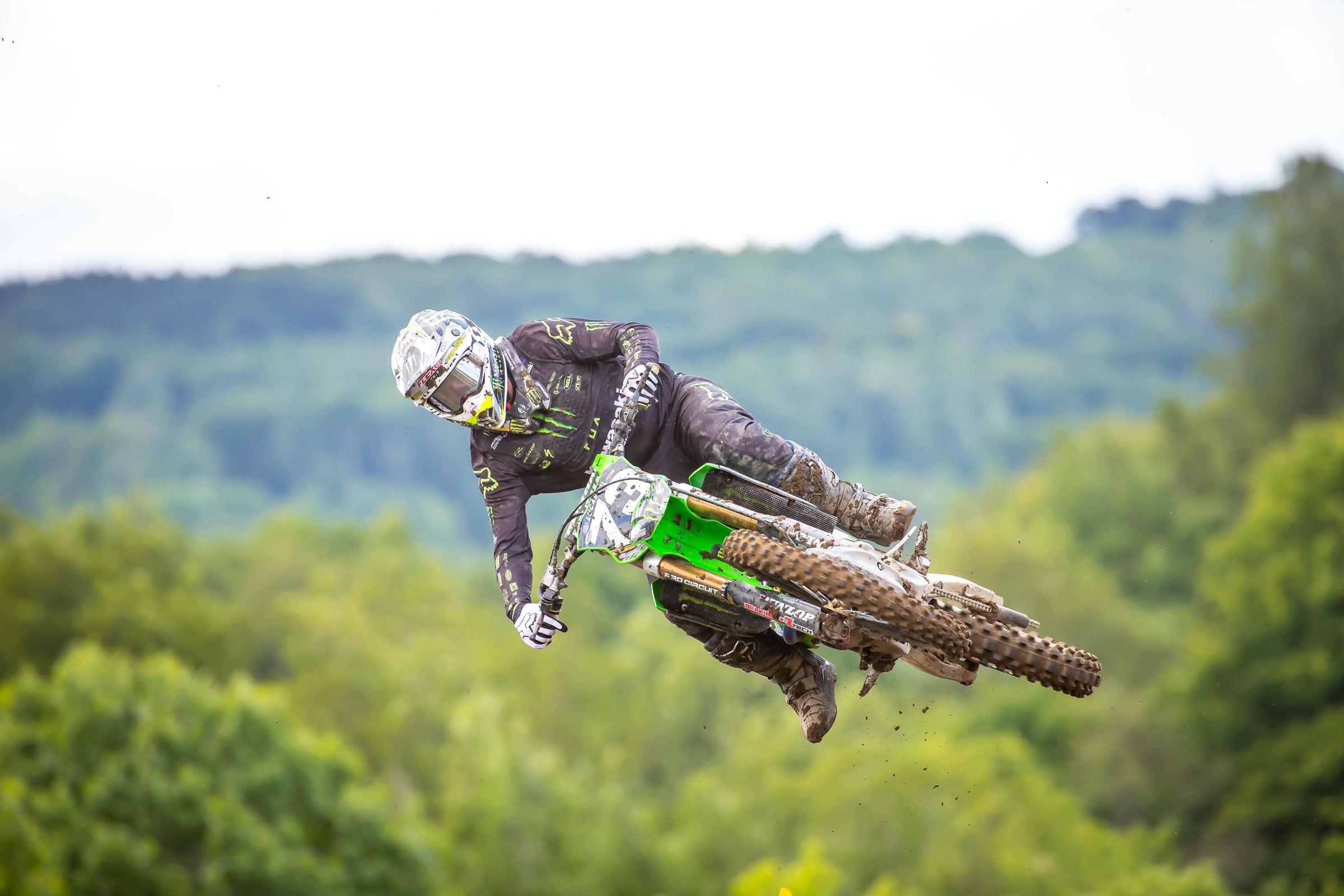 Redux News and Notes From Unadilla

Honda HRC’s Ken Roczen went 1-1 to earn his 18th overall win overall win in the premier class, tying him with Kent Howerton for seventh-most all-time. It was Roczen’s third win of the 2019 championship and the first time he went 1-1 in 1,078 days, as he last swept both motos August 27, 2016.

Rockstar Energy Husqvarna’s Zach Osborne finished 4-4 for third overall, his fifth overall podium of the championship. Osborne has finished inside the top five 17 times in the 18 motos he has competed in.

GEICO Honda’s Chase Sexton finished 3-3 for third overall, earning his first moto podium since he won the first moto at the Florida National, on June 22.

GEICO Honda’s RJ Hampshire officially came through the first lap of the first 250 Class moto in 31st place. Hampshire fought to a 12th-place finish. He finished seventh in the second moto for eighth overall.

“I’m pretty happy with my day but I wish I would have given it a better fight in the second moto. I felt good in both motos but at the end I started making mistakes. Overall, it’s a good day but I wanted more. I have good memories here—winning my first 250 race here in 2013—so of course I want more of that but I’m happy to gain ten points on Eli Tomac in the overall championship.”

“Overall, it was a decent day. Typically, a 4-4 isn’t going to get you on the podium but it did today. I’m happy with my riding, I just really didn’t have the speed today. I felt good in both motos and I’m happy to be back on the podium.”

“Although my starts were much better and I even got the holeshot in Moto 1, today was tough. The track was challenging and my body was just physically exhausted so I struggled to find my flow in the first moto. I was able to come back in the second moto and finish strong. Of course today wasn’t my best result but we finished the day with a decent fourth overall. I’m healthy and in a good position heading into the last two rounds with the ultimate goal of winning the championship.”

“My weekend went pretty good. I was happy to qualify third and then be consistent with top-fives in the motos but I definitely want more – I want to be on the podium and fighting for wins.”

“In the first moto, I got off into a top-10 start and charged hard. That ride was what we are looking for. We obviously want to win, but to get third was a step in the right direction. It was good to see the work we put in on the off weekend turn out a great result. In the second moto, I was mid-pack on the start and was quickly moving through the pack. I ended up hitting a bump and slid out. That put me in the back trying to go forward again. I rode tight after that, but I’m happy with the day overall.”

“It was a good day even with the rough track conditions. I had good starts in both motos; we went 6-6 for seventh overall for the second time in a row. I feel like we’re in a good place, but still have work to do. All in all, it’s forward progress and I’m looking forward to finishing out the season strong with these last two rounds.”

“Today was a step in the right direction. In the second moto, I had a crazy good battle with Barcia all race long. I didn’t end up beating him, but I was happy with my effort. I’m just coming back and still healing, so I’m not being too hard on myself with the results.”

“It was a pretty rough day. I went out, qualified 14th and was having an alright day. Then in the first moto I got a really good start and had just got passed by Jason Anderson when I felt the bike starting to sputter real bad. That was pretty much the end of my moto. Then I went out for the second moto, I had 32nd or 33rd gate pick and got pushed out real wide. I had to come back from that and made it back to about 18th. So it was a rough day. I’m going to go out to California and try to fix what I’m struggling with. We’ll be back at Budds Creek.”

“It was a rough couple of weeks after that race in Florida, it kind of just took away all the confidence I had. After that it’s taken a long time to feel good again, I feel like I’m getting back to 100 percent and back where I’m supposed to be, which is on the podium. That pace we had second moto was fast, I was trying to make something happen but these guys were good. They’re 1-2 in points for reason. I’m just trying to build after a solid weekend and get even better.”

“It was a good day at Unadilla. We put in solid motos and the bike was good. I ended up crashing out of the lead in the first one and rode tight after that. The second moto I lacked a little pace, but I have my eyes on next weekend already. The small change for moto two ended up being better. The team did a great job working with us on a really tough track today.”

“Bad start first moto then someone slid out and I hit their bike, so I did a front flip in the second turn. Later that lap, I had already passed a bunch of people and someone fell into my line and I hit them, crashed again. I did what I could the rest of that moto and tried to send it for a couple more spots. On the last lap, there were three more guys right there but I lost my front end and went down again. Second moto, on the gate, [Mitch] Oldenburg’s bike wouldn’t start so they were working on it, got it going and rolled back in as the card went sideways. They set the holeshot device on his forks, so his mechanic went under my bars as the gate dropped. I don’t blame them, I’m sure we would have done the same thing in that situation but for sure feel like the officials should have held them up or done something about it. Anyways, track was sketchy that second moto and had pretty good speed late in the race, I just made a big mistake when I caught Shane [McElrath] and [Colt] Nichols and that ended my charge in that moto. Two more [races] to go.”

“I’m really bummed with the way the day ended. I had a really good day going, qualifying fifth overall. In the first moto, I finished ninth, which was my best finish of the season so far. Unfortunately I had a mechanical in the second moto and my bike wouldn’t start on the line. I took off late and just couldn’t do it with the bike. We’ll regroup, get a good week of riding and training in, then come back for these last two rounds and give it everything we’ve got.”

“The track was a tough one so I’m proud of what we were able to do and finish with another top-10 overall finish. This season has been a rollercoaster with many challenges, which I couldn’t do without the help and support of my Monster Energy/Pro Circuit/Kawasaki team. I continue to apply what I’m learning each week and we’re all looking forward to Budds next weekend.”

“All-in-all, I think today was a really good step in the right direction. It was a bummer to slide out at the end of the second moto but I’m happy with how I rode. I’m looking forward to Budds Creek and just keeping this momentum going.”

“It was a pretty rough end to the day. In the second moto, I had two big crashes and unfortunately wasn’t able to finish. I’m feeling pretty sore and I’m just going to go home and recuperate and go from here.”

“It was good to get back out there and race this weekend. The team and I made the decision to take some time off and allow my body to fully recover and I believe it was the best thing for me. Obviously, I have a lot of work to still do but it feels great to be back at what I love doing.”

“I came in with the mentality that whatever we get here is a good starting point and we will only progress from there. The field is stacked and those long ruts—it’s just completely different than any other race as an amateur. This is definitely way gnarlier than Loretta’s! I got a little bit of experience under my belt and we’re looking forward to dropping that overall number at Budds Creek.”

Haven’t had my ass kicked like that in a long time, A LOT of room to improve but the focus is next season so we’ll keep learning ?

Swoll basically said the same thing on Instagram, but in a simpler manner.