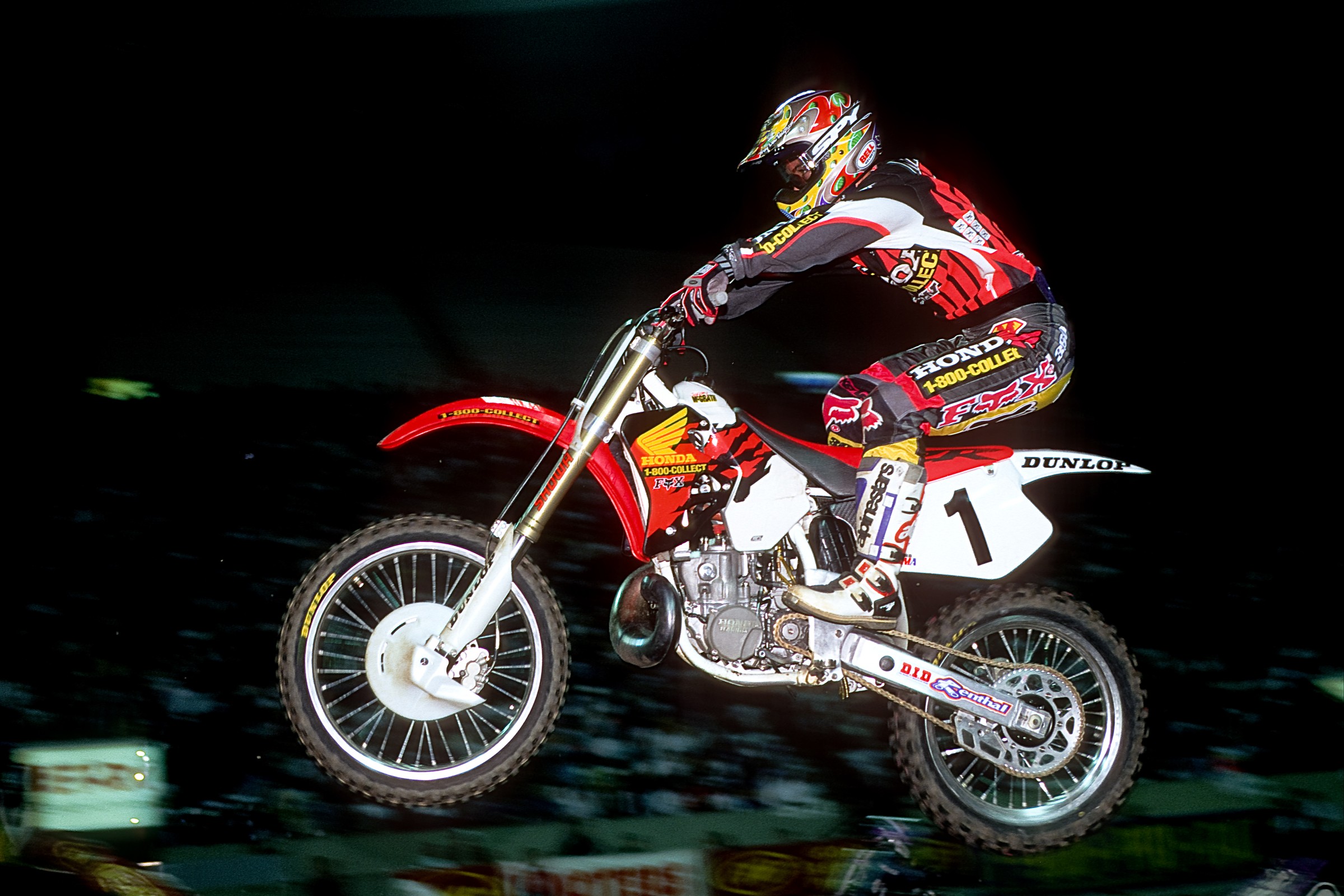 As the 2019 Lucas Oil Pro Motocross Championship winds down to the last motos of the season, Monster Energy Kawasaki's Eli Tomac is on the verge of clinching a third straight 450 Class title. That would put the Colorado-born rider in some rare company: in the history of American motocross and supercross, a three-peat does not happen often.

Like almost every list, this one begins with Ricky Carmichael. He had several three-peats throughout his career, on three different sizes and brands of motorcycle. His first came on a Kawasaki KX125 in the 125 Nationals (1997-'99), where he swept three straight titles to begin his professional career. Then he jumped up to the 250 class outdoors and would reel off seven more consecutive titles, first on a Kawasaki KX250, then a Honda CR250, then a CRF450R, before going over to Suzuki on an RM-Z450 to end his career. All told, Carmichael won 10 straight AMA Pro Motocross Championships, arguably the most "unbreakable" record of all. For instance, a 2020 rookie like Jalek Swoll or Jett Lawrence would have to win the title next year, then add nine more in a row just to equal the GOAT's outdoor dominance.

Carmichael's success is not limited to the outdoors. He won the 2001 AMA Supercross crown on a Kawasaki, switched to Honda, and then added two more SX titles ('02-'03), giving him three straight. He is the only rider in SX history to switch brands as champion and immediately win another title. After RC sat out SX in '04 with a bad knee, he came back aboard a Suzuki and won two more titles, giving him five straight SX championships in series that he competed in (albeit with an asterisk for missing 2004 altogether).

Of course, if we’re talking title streaks in supercross, you have to talk about Jeremy McGrath, who (at least) three-peated twice in AMA Supercross. He won four straight titles (1993-'96) with Team Honda in the most dominant era of supercross history. He then switched to Suzuki and lost his title in '97 to Jeff Emig, only to come back in 1998 aboard a Yamaha and reel off three more consecutive titles, establishing himself as the all-time King of Supercross in both championships (7) and main-event wins (72). Before McGrath, only one rider had ever won three straight supercross titles (see below). Then Jeremy won three in a row—and then four in a row!

Before Carmichael came along, no one had three-peated in the premier 250 class in AMA Pro Motocross since the 1970s. The first man to do it was the legendary Gary Jones. He won the first three titles up for grabs in the series (1972-'74) on three different brands of motorcycles: Yamaha, Honda, and Can-Am. Jones also was the "top American" in the 1971 Inter-Am Series, which made him a de facto U.S. 250 National Champion after you took all the top Europeans out of the rankings. So you could say that it’s four straight. His name is on the championship trophy that’s awarded the 250 National Motocross Champion every year.

Following in Jones' footsteps was Suzuki's Tony DiStefano. He gave the brand three straight 250 National Championships ('75-'77) and also won the 1975 Inter-Am title, the last year for that series. Tony D. suffered a knee injury at the start of the '78 season and never really got the chance to go for a four-peat in the 250 class.

Three-peats are less rare in the 125/250F class. Going back to the seventies, four riders have managed to win three straight titles here. Yamaha's Broc Glover was the first to do it (1977-'79). The Golden Boy was immediately followed by the Bomber, Mark Barnett. The Suzuki rider took the title from Glover in '80 and added two more ('81, '82) before narrowly losing the 1983 AMA 125 National Championship. Next came Carmichael in the late nineties, and then it wasn't until Monster Energy/Pro Circuit Kawasaki's Ryan Villopoto reeled off three straight from 2006-'08.

Villopoto also grabbed an epic winning streak in AMA Supercross. The Kawasaki rider closed out his AMA career with four straight Monster Energy AMA Supercross Championships in 2011, '12, '13, and '14. RV was arguably at the peak of his career when he retired, having swept the last four main events and led all 80 laps of those rounds, never to race another SX lap as a professional.

When RV retired, his longtime rival Ryan Dungey stepped right up, winning three straight AMA Supercross Championships aboard his Red Bull KTM. And like Villopoto, when this Ryan was done, he was done: Dungey clinched the '17 AMA Supercross title in Las Vegas and promptly announced his retirement.

The original Superman of Supercross was Bob "Hurricane" Hannah. Piloting a Yamaha, he was the first man to win three straight AMA Supercross Championships, winning the title in 1977, '78, and '79. Hannah never got a chance to add a fourth straight after breaking his leg in an off-season water-skiing accident and missing the entire 1980 season.

And we can't forget Roger De Coster. The five-time FIM World Champion also raced the Trans-AMA Series here in the States every fall. This was in the era of Hannah, Tony D., Jones, Marty Smith, and more. A bunch of very fast Europeans also participated. De Coster won the title every year from 1974-'77, when it was arguably the most competitive AMA series of all.

One more three-peat to mention: In 1991, Frenchman Jean-Michel Bayle logged a historic season. Bayle won three straight titles—AMA Supercross, 250 Pro Motocross, and 500 Pro Motocross—in the same year. He’s the only rider to ever accomplish that feat. It doesn't count here because these three happened in the same year across three different series, as opposed to three-straight years in the same class. And because there is no more 500-class series, there will never be a chance to win three AMA National Championships in the same year again. Maybe the great JMB holds the most unreachable record of all!