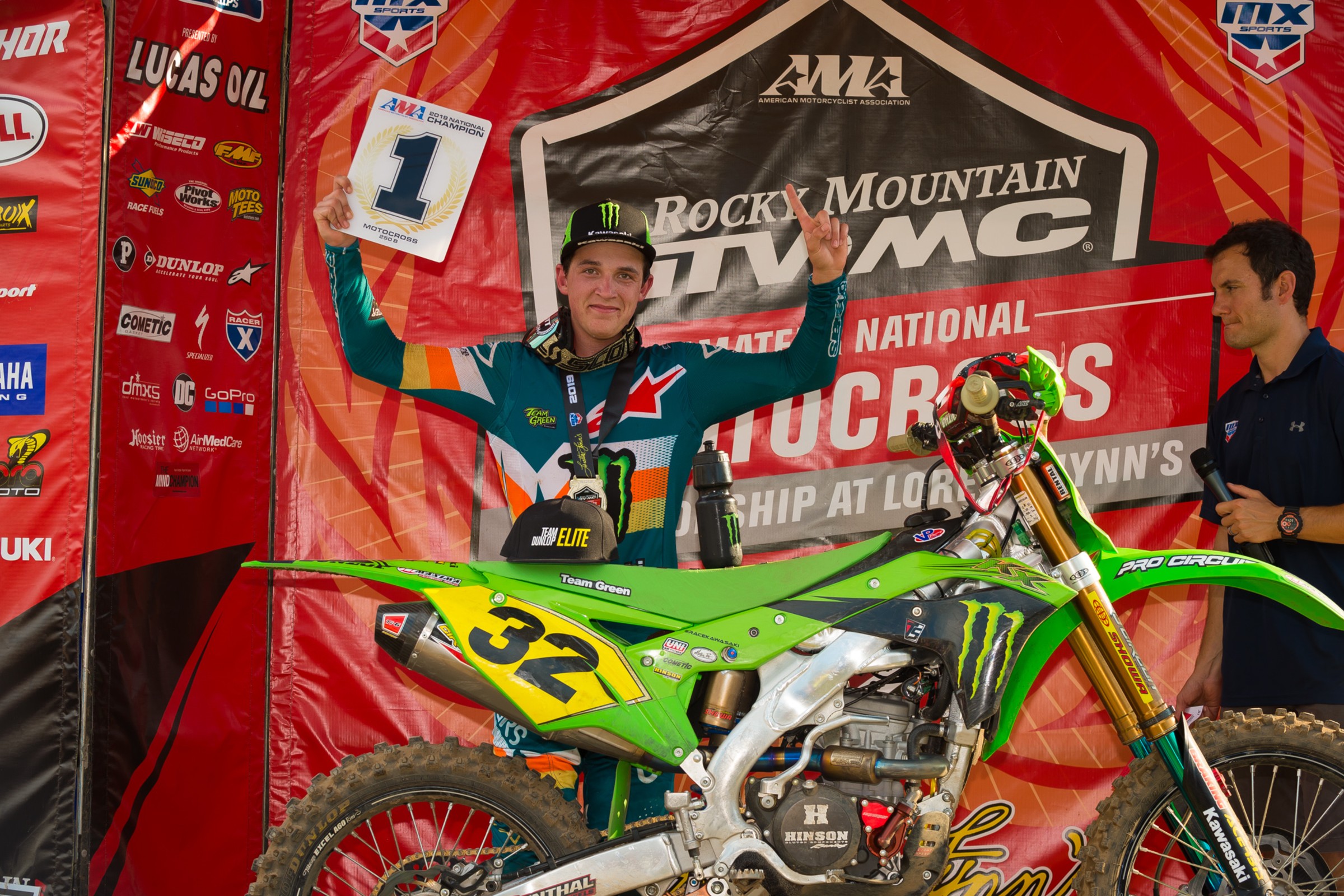 Here’s what they learned yesterday (Friday), during the racing at the Ranch.

The coveted 250 B Championship would come down to Kawasaki Team Green’s Stilez Robertson and Dylan Schwartz, with Jarrett Frye sitting in third as the spoiler. Robertson and Scwartz got out together, but Schwartz made the pass and started getting away. It looked like the Suzuki man had the stuff to win the title, but then he stalled, Robertson and Frye rolled past him, and it was over. Robertson, once a top minicycle prospect who has suffered all sorts of bad luck at this race the last few years, scored the title with 1-2-2 finishes.

We mentioned earlier this week that Robertson has had less-than-stellar years at Loretta Lynn’s, and celebrated a big weight-off-the-shoulders win in moto one of the 250 B class. So yesterday when he took the 2019 national title, it was even more weight-lifting than the week began. We also mentioned that Robertson appeared to be “back” and there’s no doubt that he’s leaving the ranch in a much better mindset than years prior.

Welp, Jett Lawrence got the full Loretta’s experience in his first appearance at the Ranch. Bad luck often defines the third motos here, and Jett experienced that in the worst way when his Honda broke while he was out front in 250 Pro Sport, with the title absolutely, positively within his grasp. Jett was set for 1-2-1 scores and a championship in one of the most stacked classes ever. It wasn’t much better for a variety of factory-backed talent, who suffered bad starts, crashes and injuries all week. Thus, the door was open for an underdog, and Hardy Munoz took advantage with determined riding. Munoz fought and battled, scratched and clawed for every position in every moto, and his 3-4-3 scores carried him to a huge title.

Lawrence was surely crushed, but unfortunately it happens down here. Way down in 65 (7-9) Landon Gibson was in contention until his chain came off in the final moto. Seth Dennis was also there in the hunt, but Caden Dudney went 3-3-1 for the title.

So Lawrence, early in the week a favorite to win both Pro Sport Championships, saw one slip away due to a bike problem. He had another shot in Open Pro Sport, and with rival Jalek Swoll suffering from a groin injury, there was a chance. But Swoll showed heart, getting the early lead and holding strong. He said he was in pain even on the parade lap.

“I’m turning pro soon and I know the big dogs go racing with way worse than what I have,” said Swoll.

Lawrence and teammate Jo Shimoda still had a shot at it but suffered bad starts. In the latter laps the Honda men started reeling Swoll in, but he held them off to secure the championship with 1-3-1 scores.

Preston Kilroy and Mason Gonzales were tied with 1-2 and 2-1 scores heading into the final moto of the 450 B class. They took it down to the last turn of the last lap battling for the title. They were as equally matched as you can get, and Kilroy got side-by-side with Gonzales three times on the last lap trying to snatch the lead away. However, Gonzales held on.

Down to the Wire

Yeah, the third motos get crazy. In Mini Sr., Ryder Difrancesco carried 1-2 scores into the final moto but crashed a few turns into the race, Nick Romano accidentally plowed into him and cost him even more time. This worked in Romano’s favor, because he was in line for the title, until Ryder D started turning in a crazy charge and almost dug it out—until another crash. That’s what happens when you charge hard.

In the meantime, it was down to Romano and Mark Fineis, and on the last two laps those two absolutely went at it, full-send mode blowing up berms, and even making a little contact. Finally, Fineis tried to charge into the billboard turn at Mach 3 in attempts to make the pass and went down in the braking bumps. Romano scored the title with 1-4-1 finishes. Romano also won the other Mini Sr. title, (DiFrancesco DNFed the first moto in that class with bike problems) to become one of the only riders this year to net two championships.