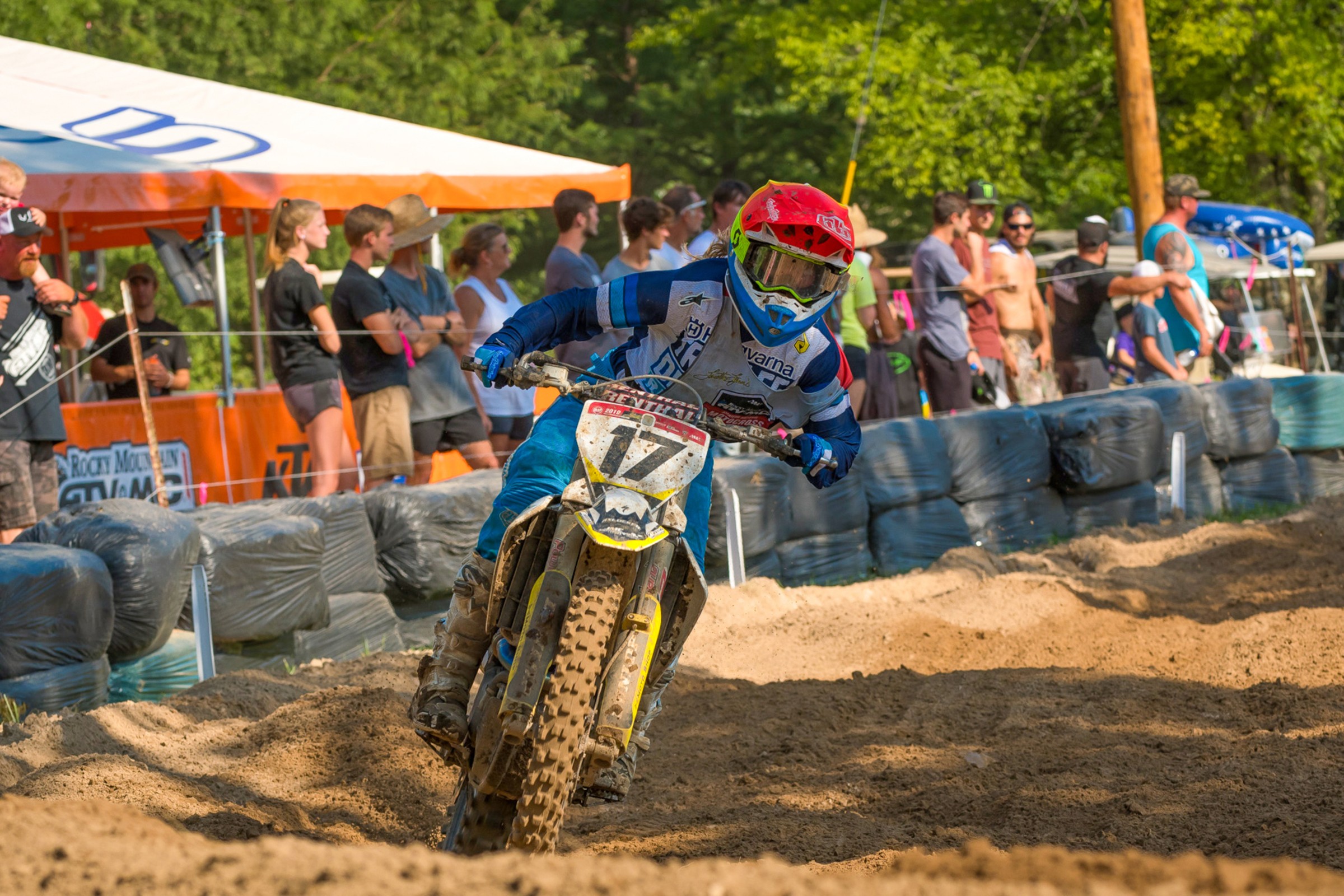 Here’s what they learned yesterday (Thursday), during the racing at the Ranch.

Lots of ties after two motos this year, including the coveted 250 B title. Stilez Robertson won the first moto, but in moto two Dilan Schwartz got the holeshot with Robertson right behind him. Robertson stuck close for a few laps but Schwartz was able to inch away. He’s looking at a 2-1 against Robertson’s 1-2. Jarrett Frye, another contender, came from eighth to third but couldn’t move further than that.

It’s always fun to watch the Junior (25+) class down here at Loretta Lynn’s Dude Ranch. This year’s bench-racing matchup? The super-fast, super-stylish Darryn Durham versus the ageless Mike Brown. Brown and Durham are probably the furthest apart on the spectrum as you can get in this sport, including age, as Brown is 47 and Durham is 30. Could Brown’s overall training gnarliness overcome a 17-year gap? In their first moto they battled until Durham went down and Brown took the win. In the second moto, Durham came out on top, setting up a tie-breaker in moto three later in the week. Also, shout out to long-time pro privateer Preston Mull, who is racing Loretta’s for the first time and took third in each moto.

This year’s Rocky Mountain ATV/MC AMA Amateur National Motocross Championship at Loretta Lynn’s hasn’t really dealt riders the hot and humid climate that the Ranch is known for all too well. It was also surprisingly tolerable last year, too! The weather this year has been tolerable, which could be a factor as to why the racing this week—in every class—has been really, really, really, good. Riders are pushing and charging extra hard in the early laps, without fear of running out of steam as the motos roll on. Also, better weather makes hanging out off the track a lot more fun!

Although teams are working harder than ever to lock in talent early, it’s well-known that a rider that wins on a 50cc machine is not a guaranteed champ in the pro ranks 15 years later. Still, it’s impressive when you see the young talent. Ryder Ellis was dominant all week in the 50cc (7-8) class and won his title with 1-1-1 scores.

We’re on to the usual trio of battlers at the front the Women’s class, with Hannah Hodges, Jordan Jarvis, and Jazzmyn Canfield as class-favorites to win the 2019 Loretta Lynn’s title. So far this week it's been Triangle Cycles Yamaha’s Jazzmyn Canfield who sits atop the class with 1-1 scores. These women have set up what should be a great finale later today.