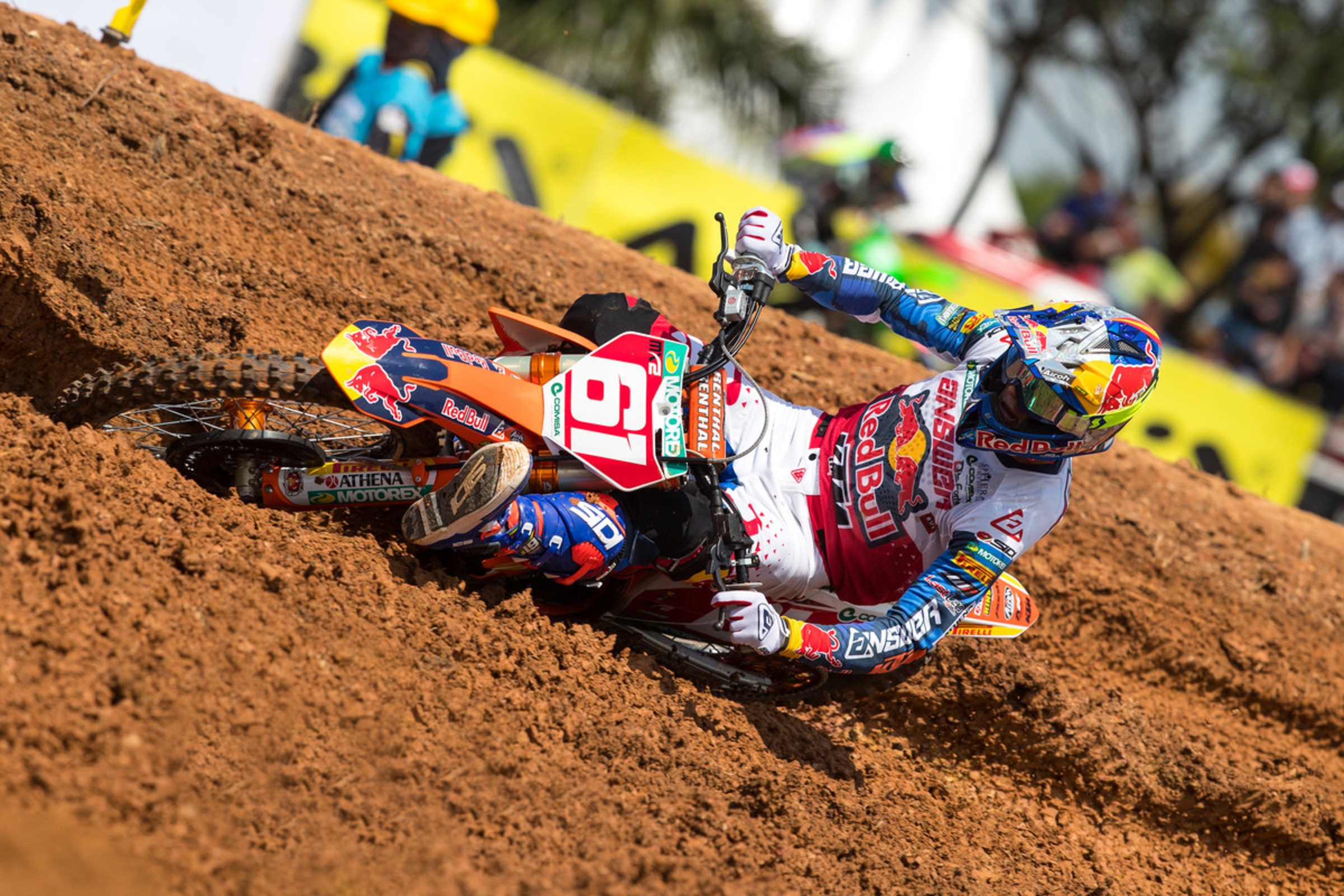 GP Report 4 Observations of the MXGP of Indonesia

Round 11 (of 18) of the FIM Motocross World Championship drops into Indonesia for the first of two back-to-back events in Asia. Here's what we observed at the MXGP of Indonesia.

1. Scribbles on the wall

For the sixth Grand Prix in succession HRC Honda’s Tim Gajser and Red Bull KTM’s Jorge Prado assumed their customary positions on top of the MXGP and MX2 podiums respectively. The Slovenian has an 80-point gap over the absent Tony Cairoli (now out for the rest of 2019 after corrective surgery on two broken right shoulder muscles last Saturday) while Prado defends a 51-point margin over Rockstar Energy Husqvarna’s Thomas Kjer Olsen.

Mistakes by both red plate holders in a steamy climate at the short, flat, newly-built circuit in Palembang showed that the title chases are far from finished. Gajser’s off-track excursion allowed Monster Energy Yamaha’s Romain Febvre to grab a checkered flag for the first time since 2017 and Olsen was relieved to have toppled Prado in the second MX2 race after the Spaniard had a momentary lapse of concentration and rhythm and dropped from first to seventh before charging back to the runner-up spot.

The level of attrition in Grand Prix has been particularly harsh for the timing of this flyaway stint of the calendar. A later date for the Indonesian fixtures (the country is a massive market for motorcycle manufacturers and MXGP has a large following in this corner of the world, especially through social media) avoided the rainy season that had hit editions in the two previous years but the entry lists duly reflected how the series has been affected by injury. Palembang (and Semarang next week) missed the entire MXGP roster from Red Bull KTM and Monster Energy Kawasaki alone, that's before counting other riders who were not fit to make the trip or teams in the midst of mid-season transition.

Gajser and Prado are one error or prang away from joining the absentees and both are not yet playing the championship long-game with seven rounds and 14 motos still to run but their authority has been duly established thanks to the statistics. Gajser has only missed the podium once, the same for Prado.

Prado’s momentary fade in the second moto was reminiscent of his past inability to cope with the heat, a weakness that saw him withdraw from at least two races in his debut season in 2016 as a sixteen-year-old and was duly eradicated with improved strength and fitness. Prado rallied in Palembang and was able to articulate the different demands of flyaway events.

“In Europe you can push all the way but here you need to focus every single lap and have to have a lot of energy,” he explained. “With all this heat you have to be strong all moto, especially on tracks like this when we do many laps. You have to be strong: I did that in the first race and tried my best in the second.”

For the fifth Grand Prix in a row, Yamaha riders filled the second and third spots on the MXGP podium. After Monster Energy Wilvo teammates Arnaud Tonus (his streak of silverware coming to an end with a second moto technical problem) and Gautier Paulin assumed the positions in Germany for round ten, this time it was the turn of the factory team line-up of Febvre and Jeremy Seewer.

With Yamaha widely rumored to be narrowing its ‘official’ line-up for 2020 then the futures of Febvre and Seewer are still in the air with the Frenchman linked to either Kawasaki or Husqvarna and the Swiss connected to HRC for next season. There is still some organization to be clarified—and certainly to be made public—but Yamaha can only be satisfied with how four different riders are squabbling for rostrum places and how the two teams are significantly closer to Gajser and Honda than they were in the KTM dominance of 2018.

“I’m really consistent and for the last five GPs I’ve been in podium contention,” said Jeremy Seewer, a former MX2 championship runner-up who is third in the MXGP standings in just his second season in the class. “I know there are still some points I can improve. It feels great [to be third]. I’m happy I am here and with how things are going.”

3. Power of the start

Red Bull KTM went 1-2 in MX2 for the second meeting in a row and both Prado and rookie Tom Vialle shared holeshots on the 250 SX-F once more, proving that Austrian power away from the metal gate is a solid bedrock for results…especially on such a compact and jumpy course like Palembang.

Team Manager Dirk Gruebel warned fans and observers against expecting ‘another Prado’ when EMX250 talent Vialle was handed a chance to impress in a late-2018 trial and was duly signed as a rookie for 2019. Even the wily German could not have foreseen the slender eighteen-year old’s competitiveness and starting prowess. Four podiums, another contract, and potentially status as the official team’s sole MX2 rider for 2020 if Prado takes the crown and moves up to MXGP next to Herlings and Cairoli means the quiet son of former GP rider Frederic has certainly taken his opportunity.

Vialle can rip a holeshot, has easy technique on hard and jumpy tracks, and determinedly goes about his job without fanfare or drama. He has smoothly integrated into a world championship-winning awning where those orange walls can easily feel claustrophobic with expectancy. By his own admission the Frenchman still needs to improve his stamina and physicality for the last crucial phases of the motos (he was undone by Prado late in the first Palembang outing after leading for five laps) but there is little question as to the identity of the main breakthrough talent in the division this year.

Depressingly for every other nationality in Grand Prix or international motocross, Vialle’s emergence in 2019 gives Team France yet another strong choice for their MXoN prospects.

What Palembang seemed to lack in soul it made up for in modernity. The track was well-prepped to deal with the passing and brief heavy showers that roughened up the hard-pack, and for a short and artificial creation in the midst of the urban setting it was positively received and well attended.

Palembang represented another vision of international motocross—one that is temporary, welcoming, practical, and man-made—rather than something historical and steeped in tradition. The biggest embodiment of this was the vast adjacent hotel that dwarfed the facility and meant a very short walk to the paddock that had travelled the better part of 14-15 hours to arrive on Sumatra and one of Indonesia’s bigger islands.

“It feels like motocross is a premium motorsport when you arrive in these places and we feel proud to see the motivation and the passion,” commented David Luongo. “A lot of fans, young fans, are based in Indonesia.” The Youthstream VP was talking to seminal motocross website MX Vice in a Podcast that was revelatory on the mechanics behind the Indonesian Grands Prix, the 2020 calendar, and the future of the U.S. Grand Prix (find it here). MXGP has experimented with overseas events for a number of years and even Luongo admits there have been some that have been better than others. This is even the case in Indonesia alone with the inaugural GP in 2017 in Pangkal Pinang famously occurring in bog-like conditions and was cancelled after one moto. Palembang felt like progress.

“It is always a question of how many fans can you touch?” Luongo said of the international spread, and the effort and reception of MXGP in Indonesia is a no-brainer in this respect. While some might see the YouTube or TV footage and feel their nose turning-up at the characteristics of the track, the benefits of flying the championship to the other side of the world in comfortable conditions and further increasing the stock and image of the series, brands and riders to a willing audience is in itself a form of success.