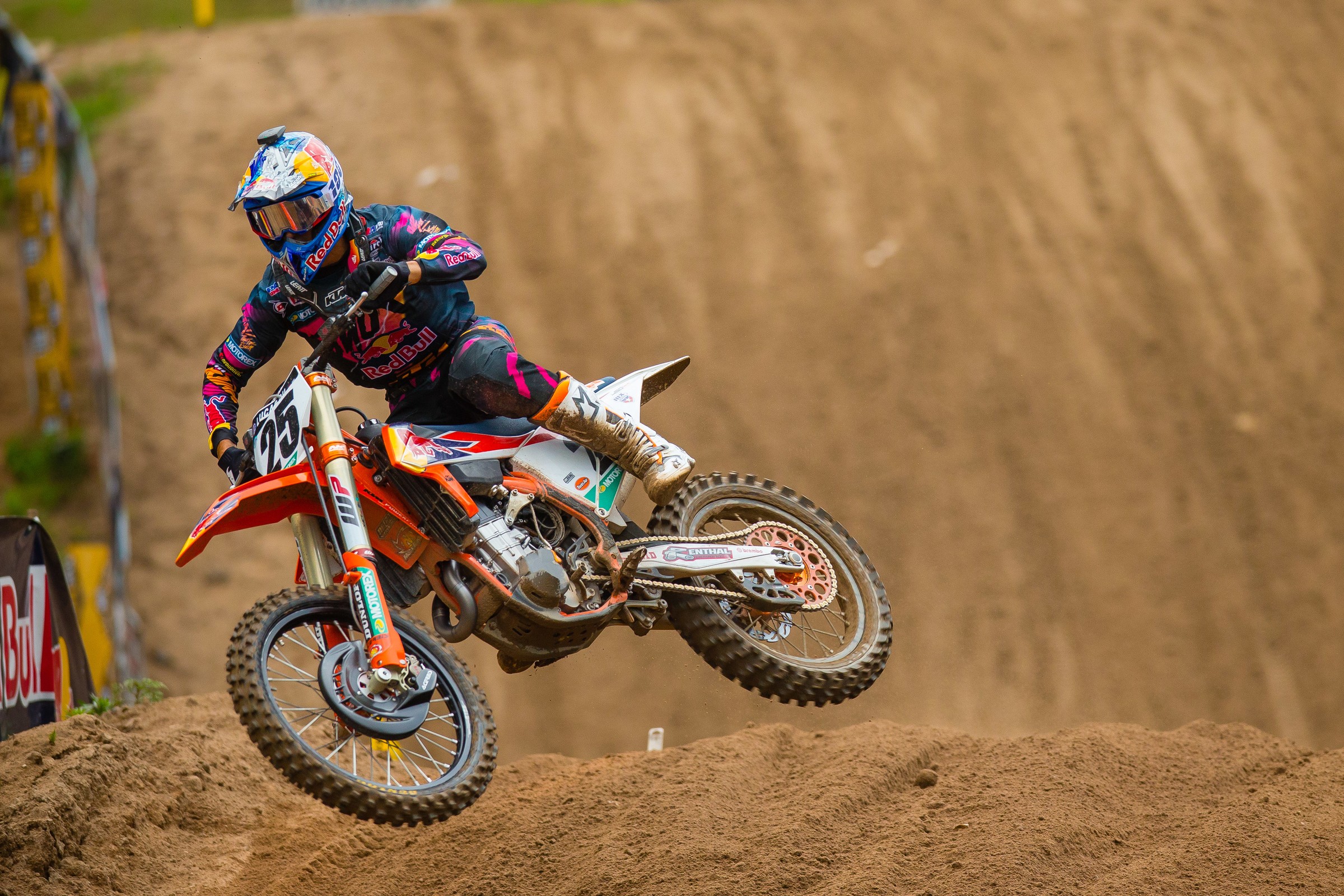 Last week in this very article we wondered whether or not Zach Osborne was going to win one of these things before the season ends. Well, he got as close as he's ever been so far at Southwick, even winning a moto to go 3-1 for second overall. Had Eli Tomac gotten around Marvin Musquin in the second moto, it would have been all Osborne needed to win the first 450 Class overall of his career—unfortunately it wasn’t the case. Afterward Osborne credited his performance with the ability to open the races with more intensity. We'll see if that intensity leads to notching a win at RedBud.

In case you haven’t noticed, French riders are on a roll in America right now. Marvin Musquin went back-to-back at Southwick after winning in 2018 and Dylan Ferrandis won a moto for the second week in a row. The only way it could get any better for French fans is if Ferrandis had been able to steal the overall from Adam Cianciarulo. It could happen at RedBud though—Musquin won there last year and Ferrandis was on the podium. If the competition doesn’t bring the heat at RedBud it’s possible we’ll see French rule on America’s weekend.

It’s been a quiet year so far for Alex Martin, who at this point in the season has usually logged a few podiums. Fortunately for Martin, the gate drops at RedBud this weekend, a track he’s been fantastic at in the past. He was second overall the last three years in a row and hasn’t finished outside the top five there since he took eighth in 2014. Those are some pretty good numbers! They’ve also made some big bike changes in the last few weeks, which Martin says he's starting to get used to. We’ll see if he maintains his trend of speed this weekend in Michigan.

These entries are usually reserved for on-track action, but the fans at ReeedddBuuudddddddd are so plentiful and crazy they deserve a mention. In fact, the fans at RedBud, who seem to think it’s a music festival instead of a race, make up a good portion of the weekend’s entertainment. Body paint, hollowed-out watermelons worn as hats, and plenty of loud and rowdy behavior will be on display this weekend. If you live even remotely close to the area be sure to take it all in firsthand. If you’re watching on TV, listen to how loud the crowd gets during the podium interviews. This place gets nuts, making it one of the most entertaining races of the year.

Motocross is tough no matter who you are, but it’s especially difficult for privateers who, especially compared to factory-backed riders, are always lacking in the resources department. So when you see John Short break into the top ten (15-9 for tenth overall) in the 450 Class at Southwick, one of the roughest and gnarliest tracks on the circuit, you’ve got to give him some recognition. It’ll be interesting to see how that momentum carries over into this weekend’s racing. Read what Short had to say about his weekend here.

On the lookout for fantasy picks? It’s hard to think Brandon Hartranft wouldn’t be a good choice after watching the Cycle Trader/Rock River Yamaha rider have a breakout ride last week at Southwick. Before Southwick, Hartranft’s average finishing position was 21.9 (thanks in part to a disastrous first three motos), but at Southwick he went 7-8 for an extremely solid seventh overall. As an added bonus, his performance put him a single point ahead of his teammate, Jacob Hayes. We’ll see which of the two is leading after RedBud.

Cooper Webb hasn’t been the dominant force at in the Lucas Oil AMA Pro Motocross Championship like he was in Monster Energy AMA Supercross this year, but a quick look at the results shows the former 250 National Champion has been improving steadily the last few weeks. After hanging around outside the top five for most of the motos early this season, Webb hasn’t been out of the top five in the last five motos. He also secured fourth overall at Southwick via 4-4 moto scores. If Webb keeps improving at this rate it won’t be long before he joins the fray up front and battles for wins.

In case you missed it, the racing up front in the 450 Class has been extremely intense lately. When the gate drops it seems like the guys have been slicing, dicing, and banging with a fervor we’re used to seeing exclusively in the 250 Class. Whether it’s a product of six to eight guys all believing they have a legitimate shot at winning the moto, or if it’s simply the beginning of a new world order in the 450 Class, it’s immensely entertaining. Don’t miss the start of the 450 motos this weekend, and if the stars shoot to the front, buckle up and get ready for a wild ride!

The last time Michael Mosiman raced was in Florida, where he impressed by way of 3-5 moto scores that resulted in fourth overall. The Rockstar Energy Husqvarna Factory Racing rider actually tied for third overall with Cianciarulo but lost the second-moto tie-breaker. Unfortunately, Mosiman missed Southwick after a nasty practice crash, but he’ll be back for RedBud. Will his upward trend continue when he returns?

If you’re not following Hunter Lawrence on Instagram, you should be. Where else are you going to see posts like this?

My apologies to all my team, sponsors and supporters, i was at the wrong race yesterday, i should of been at Mammoth Mountain racing amateurs, what a joke of a day, will sort my sh#t out for next weekend, one to forget @fchonda #D-

The Australian was referring to 9-13 moto finishes that resulted in 11th overall. It’s not the worst finish in the world by any means, but after winning a moto at High Point, a 9-13 day must indeed feel like a letdown. Getting passed by teammate RJ Hampshire in the points probably didn’t help, either. Look for Lawrence to get his sh#t sorted at RedBud this weekend.