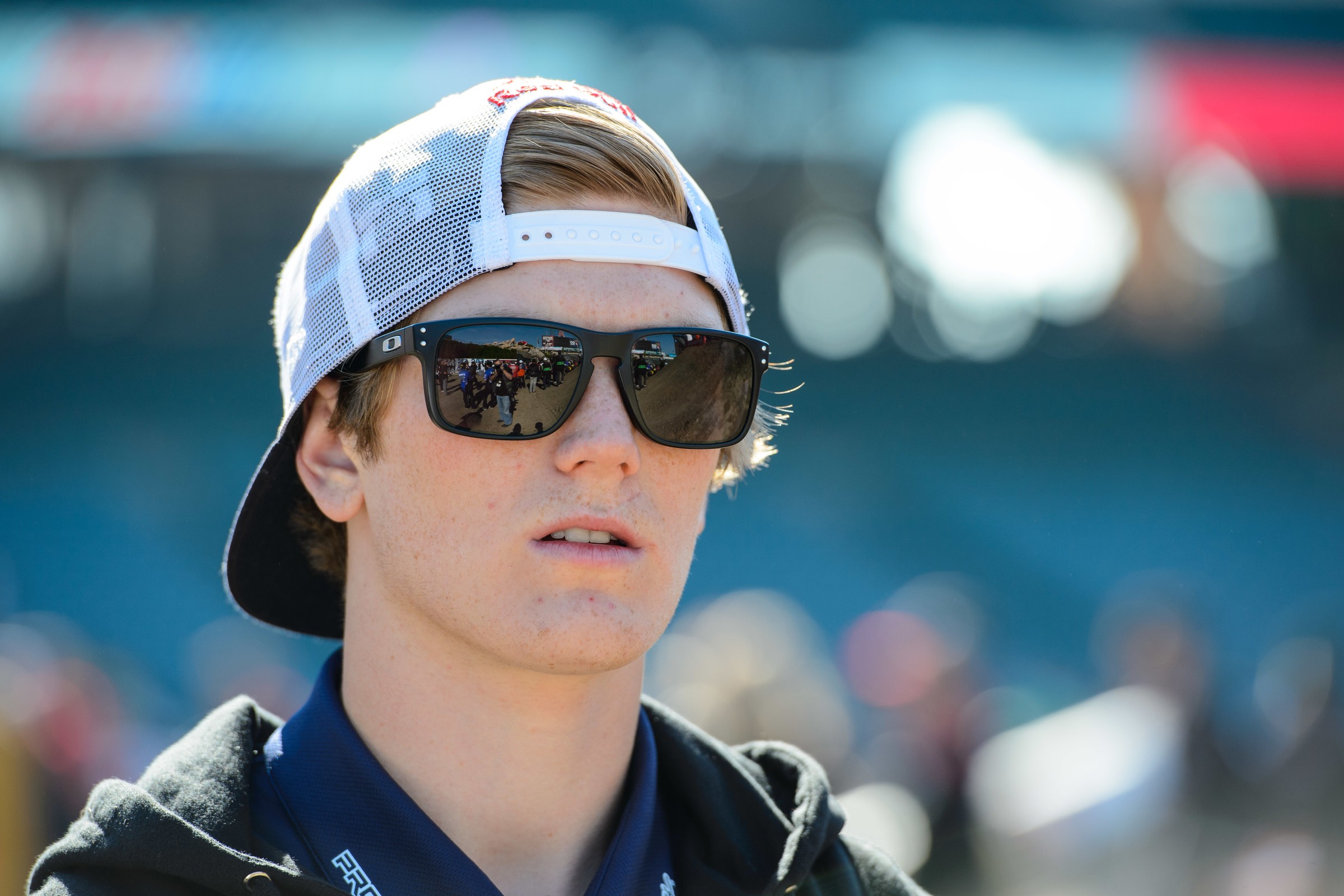 Where Are Jessy Nelson

Nelson, who turned pro in 2012, was on his way up as a professional racer. He won the 250SX main event at Anaheim 1 in 2015 and scored several podium rides in both supercross and motocross. However, during the summer of 2016, Nelson suffered a career-ending injury.

Since then, he has worked on projects both inside and outside the two-wheel racing world—even beginning a four-wheel racing career as well. But motocross is a tough sport to stay away from, and Nelson has potentially found a new niche for himself.

Racer X: How did it go today?
Jessy Nelson: Today went really well. It was my first time in the announcing booth. Everything was a little bit different than I expected. It was kind of cool to see the behind the scenes and different view of racing that I’ve never really experienced, so that was great to see. It was a once-in-a-lifetime opportunity, it felt like. It was cool.

You jumped right into the deep end with the announcing—most guys might start doing some local tracks and get a feel for it. But you just came in and announced a national for your first time!
Yeah, it was tough. Rob and Tim, those guys are so experienced. They’re intimidating. When you’re next to them and their voices are so strong and they know exactly what they want to say and they always say it perfectly, it seems like. They’re really good at what they do so it’s hard. It’s intimidating. Sometimes you’re like, I don’t even want to speak at this point because they’re just so good. But it was cool to learn from them. I think the next time I do it, I’ll probably feel a lot more comfortable and not be so nervous.

Were you happy with your performance?
I have no clue. It’s hard for me to hear myself. I always am my worst critic, so I felt like I didn’t do a good job, but people said I did. We’ll see. I’m not too sure how I ended up. It was fun to experience and to learn a little bit more off of those guys like Tim and Rob.

Tell me a little bit about how this came about?
I got a call from Tim with my old agent, Bob Walker. They asked if I would be interested in doing it. It gave me a good excuse to come all the way up to Hangtown to watch a good friend of mine, Derek Drake, make his rookie debut. It was cool. Then I also stopped at my parents’ house which is halfway up here from Southern California. I got to spend the night at my parents’ house, and then come up here with my dad and have fun for the past two days. It was really cool.

What else is going on with you?
For the last couple weeks I’ve been just working on my side by side deal. And for the next couple years, I am trying to set everything up and get a full race team going. I have a game plan of what I want to do with that and setting up everything, whether it’s sponsors and people on board and kind of figuring that all out. I’ve been enjoying it quite a bit. It’s been really good and fun.

Side by side racing is blowing up right now. I know how popular it is out here on the West Coast, but can you tell me a little more about it?
You can call it side by side or UTV racing. It’s the same thing. I race a Polaris RZR in the 1000 class. I mainly race a production 1000. It is a pretty competitive class. The last couple races we’ve gone to there’s been over 40 drivers in our class. So 40 riders on a motocross track in side by sides is pretty hectic. But it’s been really fun. I feel like I learned so much racing Pro Motocross and supercross that it transferred over a lot for me. So I feel like I have a bit of an advantage, but then again I also have hand controls and things like that, so it’s a lot of work and it’s hard. But I’m getting the support, so I’m going to keep doing it as long as I can.

Where does the series run and how many events are there?
I’m kind of scattered a little bit this year. I started off doing the WORCS series, which started in Primm, Nevada. Primm is just shy of Vegas, about 30 or 40 minutes. The series will then go to Glen Helen. It goes to Mesquite, Nevada. It goes to Lake Havasu. It goes kind of all over. I think there’s 12 rounds or so. I ended up missing a few rounds. I had a back surgery done, so that caused me to miss some races. I am just kind of picking the races that I want to do and doing a lot of filming and providing a lot of content for Polaris and 4 Wheel Parts, who is basically my title sponsor as of right now.

Is there money in UTV racing or is it just sponsorship stuff?
There is, but it’s only for certain people. They’re all about media and stuff like that, so if you have it, awesome. But the people that have been doing it a long time that are racing the pro class and they’re winning championships in those classes, they’re getting paid but there’s a difference. UTV’s haven’t really been that big in racing for very long, but it’s growing substantially. There’s OEM support so that’s cool. It’s growing a lot. Honda and Polaris and Yamaha, they’re all pretty involved, along with Can-Am. I think Kawi is probably going to be headed that way too in a year or two or three when they come out with their new side by side.

You mentioned you had back surgery recently. How are things going with respect to your injury?
I had a cyst removed out of my spinal cord. My doctor had to go in, drill a hole through my spine, go into my spinal cord, remove the cyst out of my cord. He injected a bunch of stem cells and put this artificial sponge inside. Then put all the cells in there and had that sponge so they wouldn’t disperse throughout my body and they’d stay in one location. So I had that three and a half, four weeks ago. I’m still healing up from that, which kind of played a factor in me doing my side by side season. So that’s where I’ve kind of just been doing film content when I can. Right now I’ve taken a little time off just with healing from that. Then once I’m ready to go I’ll go back to doing races and stuff like that.

Outside of racing, how are things in your personal life? You got married last fall, right?
Yes, it was in July actually, so it’s coming up on a year in a couple months. I’ve been married almost a year now, and that’s been great. Just living that kind of life. It’s just kind of nice to enjoy life and not really be stuck doing one thing all the time. I can go to the mountains. I can go to the beach. I can do some woodwork projects. I can go take my dogs to a park and have fun. Just do different things. Go check out different restaurants or bars. Stuff that I didn’t really get to do before. So I have been enjoying that quite a bit. We are still living in Southern California, where I was based when I was racing. I’ll probably try to move back to where I grew up, eventually, but right now I am enjoying SoCal and how close it is to the racing world.