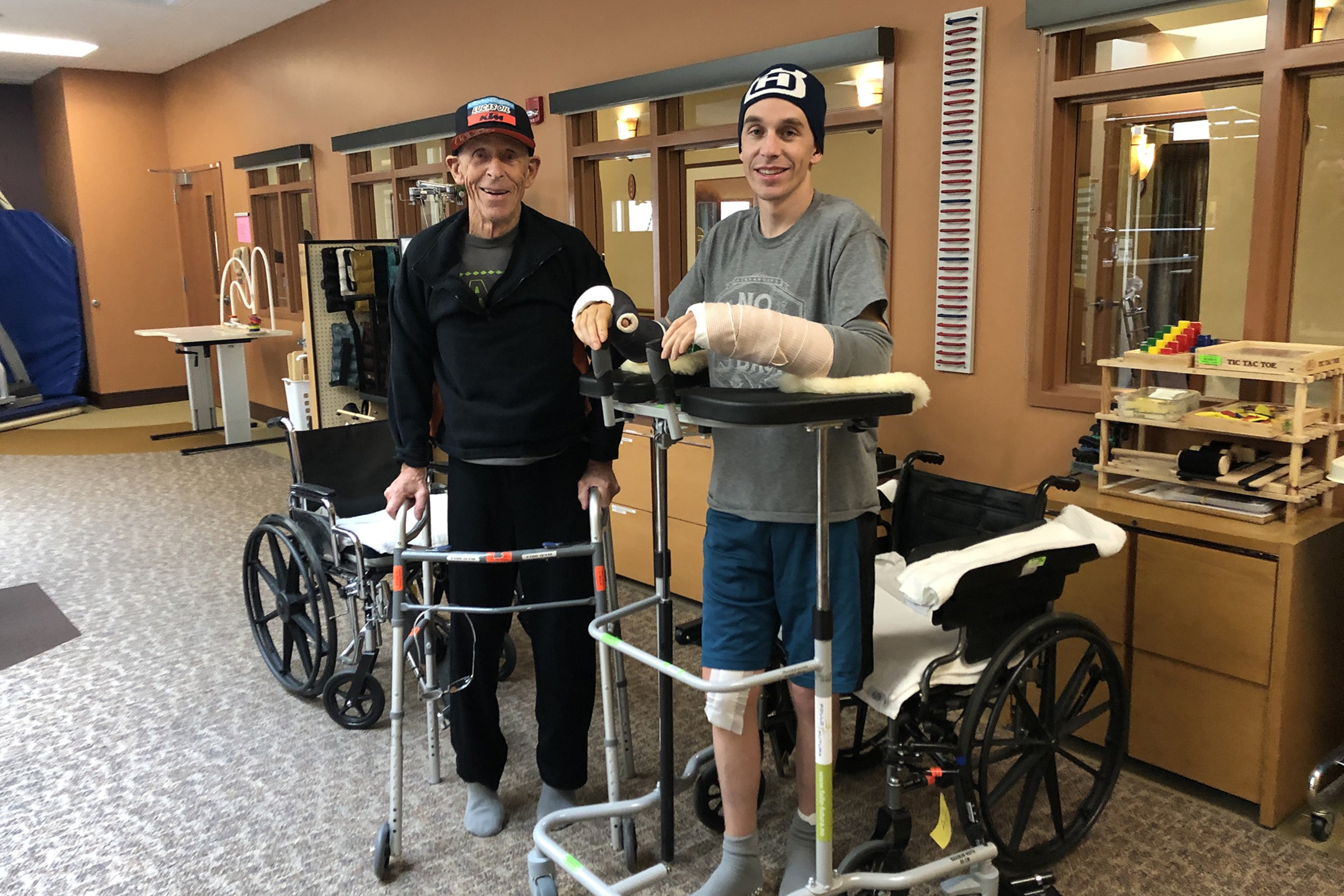 Where Are They Now Two Weeks of Hell

As told to Mitch Boehm

The last couple of weeks have not been kind to Malcolm and Alexander Smith—or their families. Both were injured badly within a week of one another in early February. Both had surgeries involving plates and screws (and pins and rods), and both were, up until the 13th of February, convalescing at the same rehab center in Southern California, and in adjoining rooms. The strange ironies and coincidences go even farther than that, but we’ll let the guys themselves tell the stories thanks to bedside interviews done by Mitch Boehm, who co-wrote Malcolm’s 2015 autobiography Malcolm! The Autobiography, available at www.themalcolmbook.com.

Six weeks ago, during the holidays, I was watching our large and extended family enjoying themselves at our home and thinking things were pretty darn good, with everyone healthy and happy. But two weeks ago it all went to hell in a handbasket in the space of just a few days when my son Alexander and I both suffered serious injuries in separate accidents hundreds of miles apart.

I got run over by a golf cart, of all things, while golfing in Death Valley, California, breaking my hip badly enough to need emergency surgery in Las Vegas. I hadn’t golfed in 20 years, but there you go! And Alexander, while leading an off-road ride down in Baja, Mexico, hit a cow head-on at high speed, badly breaking his femur, arm, and hand, all of which required multiple surgeries to fix.

It’d be almost funny if things weren’t so painfully serious, but we’ve both ended up at the same rehabilitation center in Loma Linda, California, and in rooms right next to one another. As a family we haven’t said much publicly about all of this, and there’s a little misinformation floating around because of that, so we wanted to bring you all up to date on what happened and how things are going in the aftermath.

My injuries occurred at the Furnace Creek Ranch golf course in Death Valley, California, while participating in a fund-raising tournament organized by my great friend and racing buddy Bud Feldkamp and his wife Pam, who head a foundation called the 128CM Memorial Foundation (128CM.org). The foundation is dedicated to their two daughters—and their families and friends—who were tragically killed in a plane crash in 2009.

My wife Joyce and I had gotten to the final hole and were waiting for the team we were playing with to walk onto the green and finish up when I was basically run over by a golf cart. In a nutshell, another golfer sitting the offending cart wanted to move the cart to a different spot and clicked off the parking brake and pushed down on the gas pedal in order to move it. Problem was, the cart was in reverse, and the reverse warning beeper—which is required on all such carts—wasn’t working or had been disconnected, which would have alerted him—and us—to that fact. Since the cart was battery powered, it was not only whisper quiet but had 100 percent of its torque available immediately, two facts not at all in my favor as I stood 10 or 15 feet away.

Get the Latest racer x brand

The thing hammered me into a patch of cement and continued climb over me just as a 4WD Jeep would over a big pile of rocks, breaking my hip pretty badly. Standing back there, I had no warning I was about to be hit. Even as I was being pounded into the ground I had no clue what was happening; it was a complete blind-side. I don’t have a lot of padding these days, never have, really, and the pain was terrible as soon as the shock wore off.

Once they pulled the cart off me and figured out I was broken pretty badly, someone called the Park Service ranger who helped load me into a fancy 4WD medevac truck for a ride to nearby Pahrump, Nevada’s Desert View Hospital. There they diagnosed the damage, knew I needed surgery, and Joyce began researching doctors and hospitals that could fix me up reasonably quickly. We settled on a Mountain View Hospital in Las Vegas and a well-respected doctor in the area, and a day after I was moved there I underwent surgery, surgeons plating and screwing my hip together. A couple days later I was moved to a SoCal rehab center in a van with worn-out shocks (I felt every bump!), which is where I stayed until going home on the 13th of February.

The weirdest part of the story might just be this: Joyce and I actually sponsored the golf carts for the tournament, each one carrying a placard that read, “Golf Carts Furnished by Malcolm Smith Motorsports.” Go figure!

Anyway, about the time I was recuperating from surgery, my son Alexander was down in Baja leading his annual ‘No Wimps’ ride, which is highly challenging and reserved for really talented riders. When one rider from the group took a wrong turn and got lost, Alexander and another rider went off to collect him. But I’ll let him tell that story…

We were on day three of our second-annual ‘No Wimps’ Baja ride, and the group of about 20 riders was jelling really well and having a great time. At the end of the day, just as we’d gotten into Bahia de los Angeles, one rider hadn’t yet checked in, and via our GPS system we figured out where he was, so me and my trusted wingman and good friend Bob Foster headed out to grab him. It took us about an hour to reach him and, since it was now dark, the three of us headed back to the Bay of LA on the highway instead of the trail. I was leading, with our lost rider between me and Bob.

The highway was rolling, with dips and rises, and we were going pretty fast, probably 60 mph. As I crested one of the rises a very large cow ran across the road in front of me, and the positioning and timing couldn’t have been worse. The cow was basically straddling the double-yellow stripe when I slammed into it at full throttle. It all happened so quickly I didn’t even have time to shut off, let alone brake. By the time my brain comprehended what was happening I’d already hit the cow.

I remember everything … tumbling and sliding and hearing that sickening sound of metal and plastic scraping across the asphalt, and feeling my helmet do the same. The rider we’d gone after ended up crashing when my bike ricocheted in front of him after hitting the cow, but he wasn’t hurt badly. When I finally came to a stop I was facing the direction I’d come from, and the guys were quickly with me and assessing the damage. Bob got his flashlight out and we pretty quickly determined my femur was busted, and I remember looking down at my left arm and seeing my index finger touching my elbow. And that’s when everything started coming apart. The pain was now heavy, and I knew I was badly hurt.

A car happened by pretty soon after, and it was a godsend, as the guy inside was the driver of the town’s ambulance. His wife was the paramedic, so he headed back into town to roust her and grab the ambulance. Once it arrived, they taped me to a body board to secure my leg and neck, not knowing if I had any back or neck injuries, and drove me to the town’s medical clinic, which was basically a back room at the police station. And that’s where I spent the night, taped to a body board suspended between two plastic coolers (so I wouldn’t be on the ground) with several serious fractures and no pain meds. Let’s just say it was a long, painful, and awful night. Luckily, some of the group stayed with me, giving me water and trying to keep my spirits up. It wasn’t easy.

Daniel Ixcot, a family friend who’s intimately involved with our Malcolm Smith Baja Adventures and the El Oasis orphanage in Baja, and my wife Lauren arranged to have me flown to Tijuana the next day, where I could be transported across the border to a hospital. So almost a full day after getting hurt I was placed in a Cessna 210 and flown north to TJ, where I was taken by ambulance to Scripps Mercy Hospital in San Diego, where doctors were waiting. Being on the body board gave me blisters, and the duct tape they’d used to tape me to the board stuck to my skin, which tore off when they removed the tape. It was ugly, but I was happy to finally be in a place that could take proper care of me.

In two separate surgeries over the next few days, doctors at Scripps put a rod, plates, and screws in my femur, and in a second surgery placed two plates and several screws in my left arm, along with a bunch of screws and pins in my hand. A day or so later I was moved to the rehab facility closer to home, and that’s how I ended up being in a room next to my Dad—which my mom Joyce arranged. I’ve got about another week of rehab until I can go home, but I can already stand and, while the physical therapy hurts, I’m finally starting to feel better about returning to normal.

It’s more than a little ironic thinking about my Dad’s history, as he broke his femur at 18 after hitting another rider smack dab in the middle of the motorcycle as the two were traveling perpendicular to one another at a high speed—just as that cow and I were doing. We both timed it perfectly, and we both broke our femurs and had rods, plates, and screws inserted to repair them. Dad broke that femur again in the Baja 500 years later and had to be flown back to the states for surgery, just like me. Seems like broken femurs and 90 degree-impact accidents must be threaded into the Smith DNA!

Anyway, we’re both very thankful for all the people who helped us get the care we needed along the way. Hope to see all of you back on the trail soon.