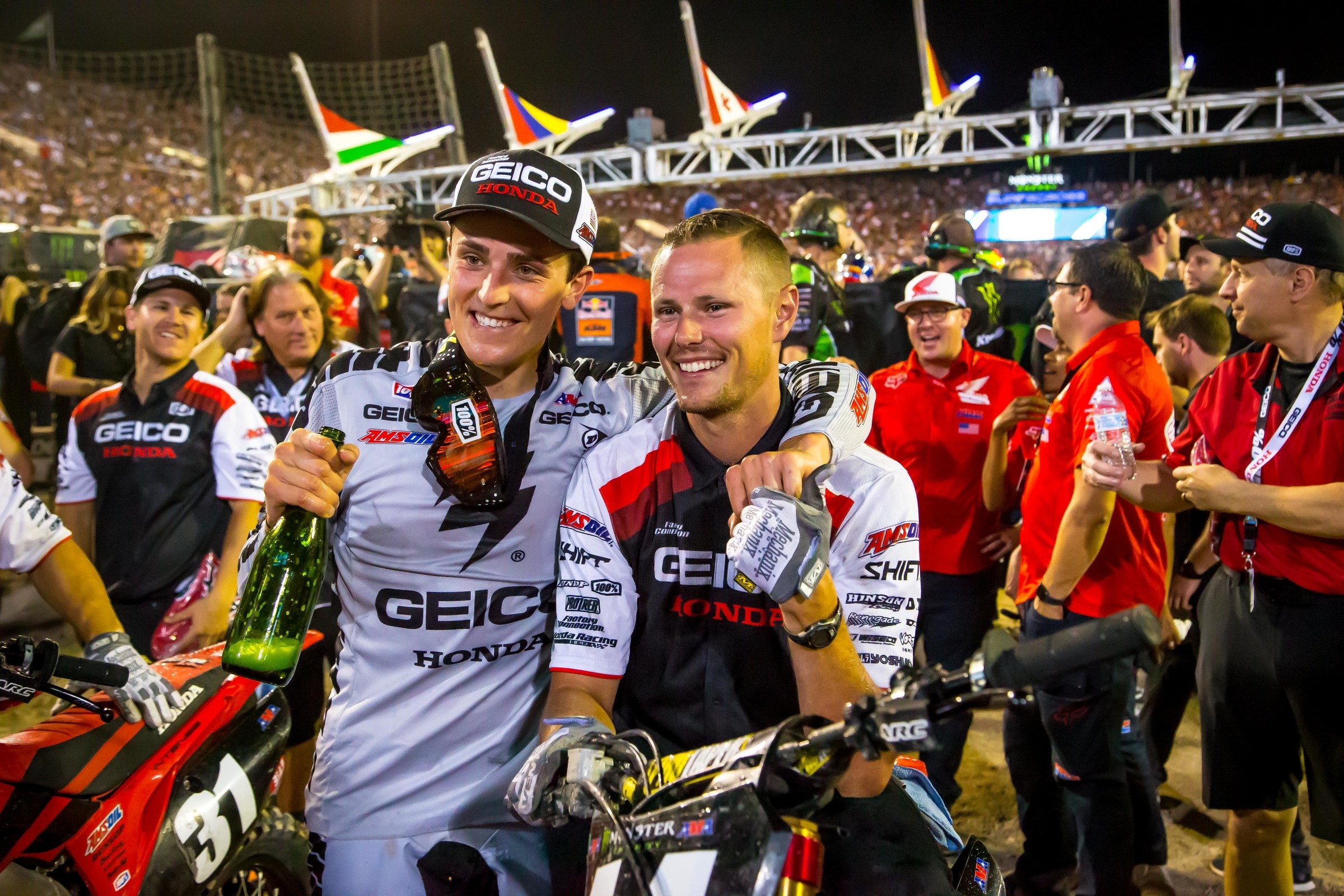 Was it the right time or the wrong time? Cameron McAdoo just logged the best race of his pro career, quickly moving up to second place during the Las Vegas Supercross 250SX East/West Showdown main event, briefly closing on race leader Dylan Ferrandis, and then holding on for his first career podium with a third-place finish. McAdoo’s previous career-best was a sixth. Against twice the talent as usual in the East/West Showdown format, he finished third.

“Honestly it was a decision I made,” said McAdoo. “I was struggling in qualifying, heat race wasn’t good. I started fourth in the main, I got into second. I saw Ferrandis in front of me and instead of saying, ‘Let me try to latch onto this guy’ I thought, ‘Let’s try to get him. Let’s try to pass him.’ Thinking that way helped me so much. All of a sudden, before I knew it, there was six minutes to go. I was like ‘We can do this.’ It was just a mindset. Mentally this is one of the biggest jumps I’ve ever made in my career.”

But just when he figured that out, the supercross season had drawn to a close, and so has his contract with GEICO Honda. McAdoo got another shot with the team as an injury fill-in for supercross, but the team has told him they will not have room to keep him for the Lucas Oil AMA Pro Motocross Championship. They’ve given him practice bikes so he can log outdoor motos with the rest of the team for the last few months, but there’s no room to go racing once Hangtown comes (Christian Craig and Hunter Lawrence will return to action for the team for the opener).

While McAdoo knew he was running out of time, he just kept working away, believing he’d prove himself somehow.

“We struggled before the first break, in Atlanta, but after that things have been a lot better,” he says. “I haven’t changed a single thing on my bike, besides a few clickers, the last few weeks. I’ve been dabbling in and out of supercross and motocross just to keep myself ready, physically. I really haven’t changed much, it’s just about believing in myself. Christian [Craig] and I have been working really hard together. He has a lot of assets that can benefit me, and it’s shown. Honestly, I made that decision to just go after it tonight. It’s time.”

McAdoo was an unheralded amateur for most of his career, so when he finally got a break—first with the Smartop/Bullfrog Spas/ MotoConcepts Honda team, and then with GEICO Honda, he was ready to work. He now realizes that, at times, he actually did too much work.

“I struggled with little, simple injuries the first year and a half of my supercross career,” he explains. “Also, I was used to training so much when I was an amateur. You didn’t have to race every weekend, so you could train so hard. I want it so bad, I’ll train myself into the ground if that’s the best thing for me. You could do that as an amateur because you only had maybe four or five big races a year. Getting the mentality that you have to be fresh every Saturday night was hard for me to do. I just want to work and grind and grind and grind, I love it. So to finally balance that out and get quality over quantity, put in the huge workload when it’s time for that, but be ready on Saturday night when it’s time for that, it took a while to understand.

“Last season I got to string together nine-straight outdoor races, then I made it through this whole supercross season without missing any time,” he continues. “I hadn’t even gotten a top-five in a race but I was still close to the top five in points. So I was able to learn some consistency. Now to finish the year fifth in points with a podium, that’s great.”

But what comes next? McAdoo has asked about a summer fill-in ride with Monster Energy/Pro Circuit Kawasaki, but he has heard the team is not required to fill Austin Forkner’s spot. Although it’s not required, the team could still sign him if they want to, and McAdoo hopes this podium helps his case. If not, he is not stressing on the situation. Even if he doesn’t get a factory slot for the summer, he believes his late-season improvement, and Las Vegas breakthrough, will keep him on someone’s radar for 2020.

“No matter what happens, wherever I go in 2020 and so forth, I’ll always feel like part of the family [with GEICO Honda] over here,” says McAdoo. “I’m proud to be able to do this for them in my last ride with the team for now. This is what they deserved after believing in me the last few years.”

McAdoo has always progressed via a slow, steady build. That process took a big leap on Saturday night. We’ll see where it lands him next.