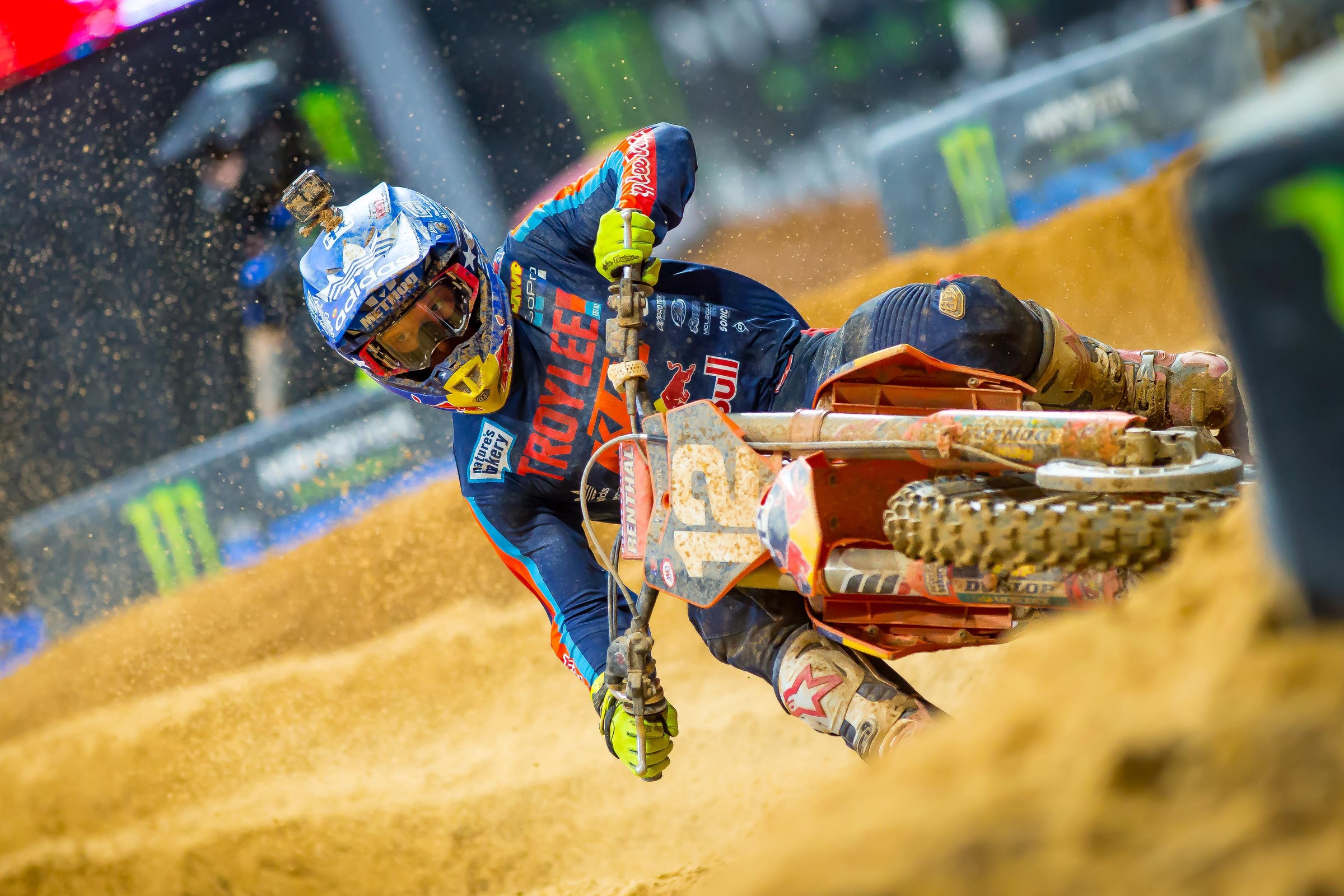 It might not look like it in today’s day and age of factory rides in 250SX, but when the class was introduced in 1985 (called the 125 Class back then), it was intended as a stepping stone to help advance riders to the bright lights and notoriety of the premier class. To ensure the sport’s rising stars continued to move along, parameters were developed to determine how long riders could linger in the “feeder” class. But rather than put a hard age limit on the class, rules were placed around riders who were performing well enough to stand out from the rest of the field. After all, why advance a rider to the premier class if he’s already struggling to perform on a 250?

The term most widely used to describe the situation in which a rider loses eligibility is “pointing out.” But how exactly does this work? Let’s consult the rulebook to find out. Please note, the rules below do not apply to the Lucas Oil AMA Pro Motocross Championship, which is a national series, not a regional series like in Monster Energy AMA Supercross. There are no pointing out rules in that series.

The most important rule is as follows:

But wait, the East Region has nine races and the West Region has 10. So how do they determine the number of races to base the rule off of?

If the number of events in each of the 250SX class regions is different, the number of events used for points will be based on the smaller number. (i.e. if there are eight West events and seven East events, the West riders would throw out their worst finish for a maximum total of seven events).

So how do these rules apply to 2019? Since 2019 rules will be based on a nine-race season, riders who earn at least 135 points will cross the threshold, which means they’ll burn a year of eligibility in the class. Anyone who does that four times (it doesn’t have to occur in consecutive years) will no longer be eligible to race in 250SX, effective at the completion of that season.

There are some special rules that affect 250SX champions too, but we’ll streamline those for you. If a rider wins a championship, he’s got four years max in the class. The only exception to that rule is if the championship is won in the fourth year (and the rider hasn’t pointed out four times) he’s allowed to defend his championship for one season. If you’ve exceeded the point threshold four times, and win the title in your fourth year, you still have to move up. Also, if a rider wins two championships, he’s done racing 250SX no matter what.

Phew! Now that we’ve got those rules out of the way, let’s look at who’s sticking around for at least another year, and who’s getting the 250SX boot.

Seasons exceeded do not include this season—if the rider has already exceeded a season limit prior to the conclusion of the 2019 season.

It was kind of assumed that the Troy Lee Designs/Red Bull KTM rider would point out of 250SX this season. After all, a rider with McElrath’s talent isn’t going to score under 135 points unless he gets hurt, right? Well, guess what? McElrath, who currently holds 123 points, ended up withdrawing from the series due to what the team says are back issues he’s been fighting for a while. Looks like Sugar Shane’s got another year on a 250 left if he wants it.

Craig has had a rough go of things thanks to injuries, and as a result, 2016 is the only year he’s exceeded the threshold. He’s missed most of this season with a thumb injury too, so there’s zero chance he goes over again. Three more years at least for the GEICO Honda rider.

He’s got 112 right now, and he missed Atlanta, which means there are no points to subtract for a worst finish. If he scores more than 23 total points in the next two races, which seems pretty likely considering he’s averaging 16 points per race, excluding Atlanta, he’ll more than likely have two years left after this season.

Nope, that’s not a typo. Thanks to injuries the GEICO Honda rider hasn’t used up any years of eligibility yet. Of course, that’s likely to change in 2019. Right now he’s got 126 points, and after you subtract his worst result (eight points earned in San Diego), he’s got 118 points in the eyes of the law. If he scores 17 points over the next two races, which he probably will, he’ll finally cross the threshold for the first time, leaving him three more years to burn.

Cianciarulo joined the class in 2014, but due to injuries, is currently in just his fourth season of Monster Energy AMA Supercross. He went over the limit in 2017 and 2018, and he’s already way past it this year, which means he’ll have one more year of eligibility left. If he wins the title, however, he’ll have just one more season left, regardless whether or not he exceeds the limit in 2020, should he opt to remain in the class.

Martin’s been racing supercross since 2009, making him a true veteran of the class. Yet, somehow he’s managed to avoid going over the threshold even once. If he hadn’t hurt his wrist in San Diego last year he probably would have gone over in 2018, but if ifs and buts were washers and nuts, we’d have a lot of spare hardware on our hands and still no years burned. Martin’s got 92 right now, so in order to go over 135 points he’d need to earn 43 points in the three remaining 250SX East Region races. That’s 14.333 points per race, which is definitely doable for Martin.

Martin hasn’t raced all year due to a serious back injury suffered during the Lucas Oil AMA Pro Motocross Championship in 2018, which means he’s still got a minimum of one season left on a 250.

Think A-Mart’s been in 250SX for a while? Davalos has been there even longer; since 2006! He’s won races and was even close to winning a title in 2014, but his efforts were thwarted by a broken ankle. Davalos has 89 points right now, which means if he scores 46 more points (15.333 points per race) in 2019 he’ll finally point out. He’s more than capable of finishing that well, but you never know what might happen until the roost settles in Vegas.

Thanks to an injured wrist suffered earlier this year, Smith is in no danger of exceeding the threshold in 2019. If he wins a title in the future, it will mark the end of his 250SX career, but as of now he’s got at least two more years of eligibility.

This is only Forkner’s third year of supercross, so he’s in no danger of being promoted no matter what. He barely went over the threshold last year, and has already done it this season. He has a 26-point lead in the East Region Championship too, which means next year will probably be his last in the class—if he wins the championship. If he doesn’t win the title he’ll have at least two more years.

Sexton is currently in his second year of supercross which means, like Forkner, he can’t be booted to a 450 regardless of what happens on the track this season. He’ll burn a year this season (he’s got 125 right now) unless he gets injured before Nashville, which will leave him with a minimum of two more years of eligibility.

Yet another rider who hasn’t even been racing supercross for four years yet, which means he’s guaranteed a spot in the class in 2020. He went over the limit in 2017, but a bad injury last year cut his season short. He’s already over the limit this year, which means he’ll have two more years to burn. But, if he wins the title this year, it’ll make 2020 the final year he’ll be able to race in 250SX.

Nichols came out swinging in 2019 by winning the season opener, and if he had been able to maintain the points lead through the finale, this would have been his last year (2019 is his fifth year of supercross). It didn’t work out that way though, and since he’s already exceeded the threshold this season, he’s got two more years of eligibility left. Unless of course he wins the title next year, which will make it his final season.

Wondering about other veterans, like Mitchell Oldenburg, Kyle Cunningham, Kyle Peters, and Chris Blose? None of them have ever crossed the threshold, which means there's no end in sight for their eligibility.