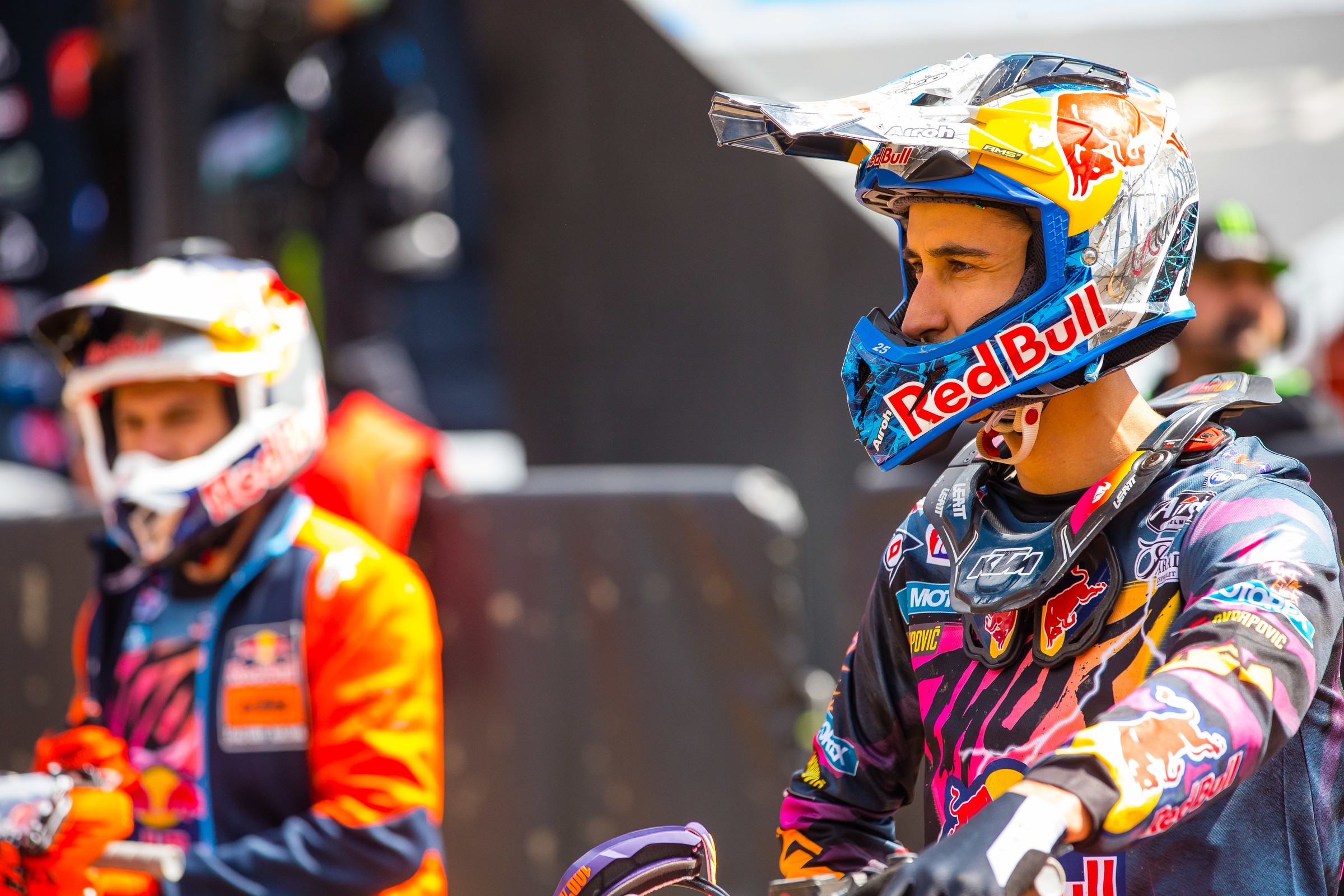 The speculation always goes back to Baker’s Factory. For six seasons now, multiple premier-class race winners have been working together with Aldon Baker, and the world wants to know how the trainer keeps the peace when there’s drama between the riders. This story never ends, because fans like the drama, and riders battling each other on weekends and then working together during the week is just too much to resist.

Red Bull’s Moto Spy series has been around for a while, but has certainly stepped up this season in terms of insider access, punctuated by this week’s upcoming episode which chronicles the Cooper Webb/Marvin Musquin dust up at the Houston Supercross. For further insight, there are scenes with Roger DeCoster and Ian Harrison talking about the situation a few days later over coffee.

“We want them to race with each other, but race forward and not block each other,” said DeCoster. “I had a little experience with that in 1991 with [Jean-Michel] Bayle and [Jeff] Stanton, also a French and American rider, so, quite similar.”

That ’91 season, on paper, marks the last time two teammates went 1-2 in the supercross championship. And Stanton and Bayle, with Team Honda, became one of the toughest feuds in the sport’s history. Both went from the top of the sport to retired within just two seasons, and former Honda team manager Dave Arnold has said before he thinks that’s no coincidence. Things got stressful, big time.

Musquin/Webb hasn’t even come close to Stanton/Bayle on the stress and drama scale, let’s make that clear. In fact, all the predictions of fisticuffs at Baker’s have ended up being false. Everyone is still there, working together.

It can still get tough though.

“It’s a problem you wish you have, but when you’re in it, you’re like ‘Ahhhh,’” said Harrison of having two riders on the same team fighting for the same prize.

“You have to act like a peace maker,” said DeCoster.

“Cooper being strong has elevated Marvin, Marvin fighting for the championship has made Cooper maybe better at his race craft,” said Harrison. “So they complement one another, and from that side you could never wish for a better situation. But inside the truck, you know they both want the same thing. They both want to be supercross champion.

“There was a lot of passing between our guys, and they didn’t look happy after the moto,” said Harrison of Houston. “There were three passes at the beginning of the race, and I would say they were all fair. Then in the back corner, we can’t see, but I think they touched there, and I think that might have set Cooper off, but after that Cooper knocked him three times. We don’t want to take anyone’s spirit away. They need to race and race hard to get to the front. That’s what we pay them to do, that’s what we want them to do, we love it and that’s what the fans want, too.”

While the record book says it’s been 28 seasons since teammates battled for the title, we all know better than that. Last year, Jason Anderson and Musquin raced for different teams, but we all know the KTM and Husqvarna operations are not totally separate, and both worked with Baker. This year is not new.

As for the atmosphere down in Florida, the videographers were down at Baker’s on April 3, four days after the Houston SX. At that time, I had heard all sorts of inside rumors that Musquin was heading back out to California to create some separation with Webb. That was not true, as he and Webb were indeed riding together in Florida. Like moths to a flame, everyone wants the drama. But there they are, riding together as usual.

In this episode, you can see that Musquin was having a great day and laying down better lap times than Webb. Webb wasn’t in a good mood. At one point, he didn’t want to ride up next to Marvin when Baker was about to break down how their motos went. Baker tries to keep Webb’s head in the game.

“Cooper, focus Cooper,” Baker told him, his voice raising as bikes begin to crank to life.

It’s almost hard to believe you’re getting this kind of access to the stuff that’s been going on far away from cameras for years, but this is the new normal. Fans expect this, and when they don’t get it, they let it be known. Just last week I wrapped an hour-long podcast with Joey Savatgy where Joey admits the level of heat he has gotten from fans on social media is quite brutal. When he was announced as the new 450 rider for Monster Energy Kawasaki, it didn’t go over well. His Monster Energy Cup move-over for Eli Tomac didn’t go over well (although, as Joey says, if he didn’t move over, he would have gotten heat from fans for that, too). When he fell in front of Ken Roczen at Nashville, fans showed up on his social media with pitch forks. Joey now realizes he has not connected with fans because he tries to stay quiet and behind the scenes. Today’s audience expects to see heart and soul on social media and YouTube. Racing results are no longer the whole story. That’s the reality of today.

The FIA Formula 1 World Championship is easily the largest racing series in the world, but it has never been very mainstream in America. In late 2016, American-based Liberty Media agreed to purchased the series for around $4.4 billion. Liberty’s move to promote the series here is very new-school. Throughout last season, a documentary crew put together a series for Netflix called Formula 1: Drive to Survive. It’s a startlingly honest look inside the sport, with real-life reactions from drivers and teams straight from the paddocks, race tracks, and offices. Storylines previously unknown or not cared about are fleshed out completely, to the point where you find yourself emotionally attached to back-of-the-pack teams you at once never cared about or heard of. It helps that, at least in my experience, European racers and teams are more open and honest than what we usually see in America, and the Euro media is even gnarlier with backpage drama and gossip than what we see here. Plus, the F1 series itself stokes the flames. When Daniel Riccardo announces that he’s leaving the Red Bull F1 team to move to Renault in 2019, the series brings both the Renault and Red Bull team directors to the press conference together to provide reaction. When do you ever see the managers of two teams bidding on an athlete on stage at a press conference together?

The only two F1 teams who didn’t participate in the documentary are the top two teams—Mercedes and Ferrari—but that’s not a tragedy. This doc makes the battle for tenth finally look like what it really is: life changing for the teams and drivers involved. We’ve always heard how hard race teams work and how badly they want it. Plus, results directly impact the employment of hundreds of people. It’s a big deal.

This is the new reality of racing, sports, and the world at large. What was once behind the scenes has become the scene, because the deep down truth is that more people are interested in drama between people than actual competition on a track, field, or court. In this sport, we know the Baker’s Factory dynamic is one that generates the most interest. The speculation always goes back there, Moto Spy just comes equipped with cameras and mics. But why would anyone on the inside agree to give this access? Certainly, Red Bull producing the series and backing the teams is a huge factor, but overall, it’s just recognition that this is the new reality, and access is no longer restricted to game day or race day. The more access we get, the more fans will come.

The latest episode of Moto Spy drops on Thursday.