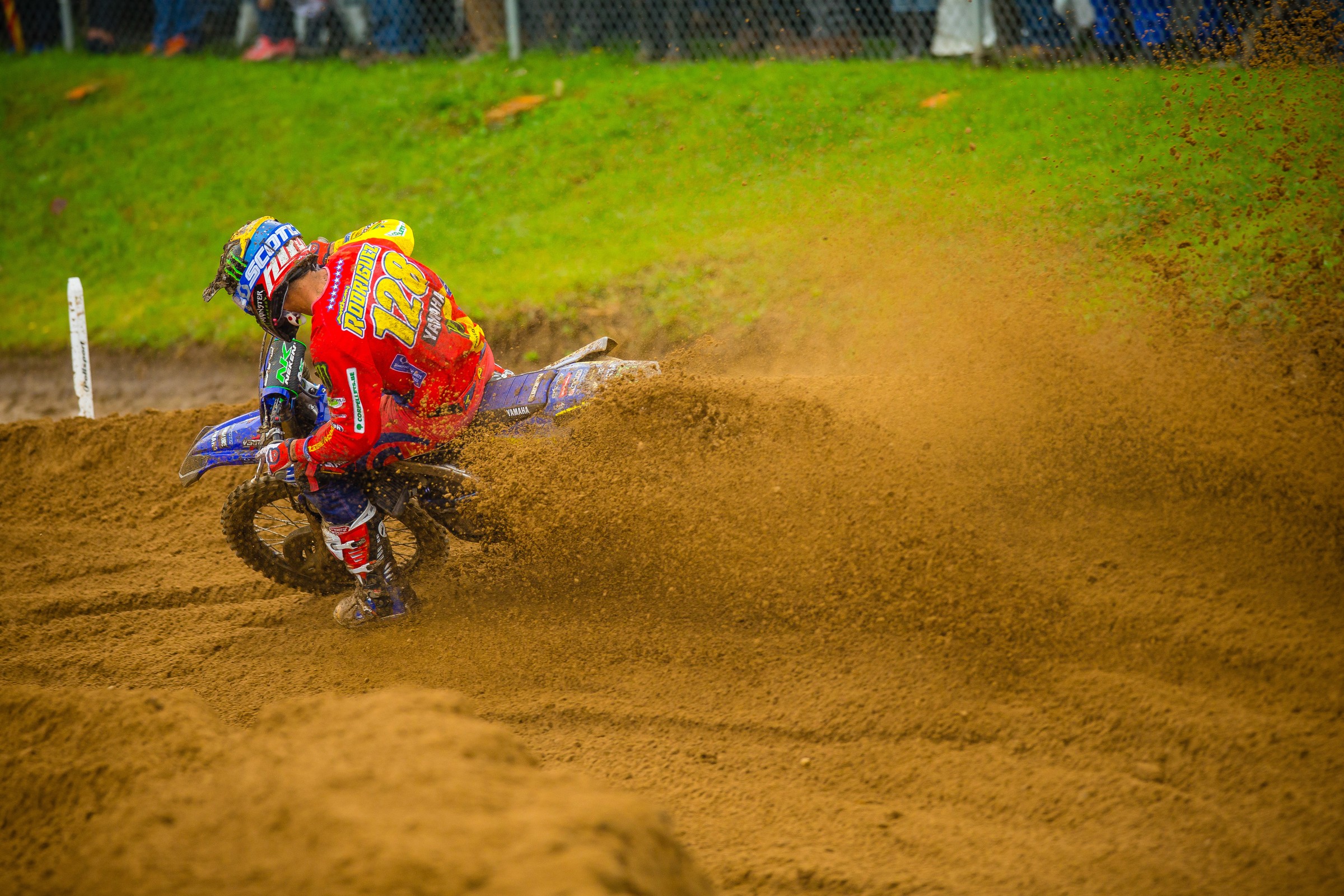 Anthony Rodriguez and Lorenzo Locurcio both race in the United States on a regular basis—competing in Lucas Oil Pro Motocross and Monster Energy Supercross—and both were selected to compete at the Monster Energy FIM Motocross of Nations this past weekend at RedBud for Team Venezuela.

In addition to being teammates at MXoN, these two are actually friends—having lived and trained together at Millsaps Training Facility (MTF) and known each other since they were kids. The two of them being close friends as well as competing regularly as privateer motocross racers makes the fact that they’re both members of the first Venezuelan team to qualify for the A Final at a Motocross of Nations (the team finished 15th overall) that much cooler. We checked in with A-Rod and Lorenzo to talk about the experience.

Racer X: Lorenzo, Anthony, what’s up, guys? MXoN is over, what are your thoughts on the events of last weekend?
Anthony Rodriguez: Not much just trying to make it through the hurricane [laughs].

The event was super cool. It was good to finally have the Venezuelan team make it to the A Final so that’s was awesome. Unfortunately, mud is not one of my strengths, if anything it is my weakness as a rider. With that being said, I gave it my best but I wasn’t satisfied with my personal results. I truly wanted to shine at this race but I didn’t.

Lorenzo Locurcio: Not much, man. Just getting back to speed cleaning everything from the weekend [laughs]!

[The] Event was great. It’s always an honor to represent my country every chance I get! Fans were amazing and the weather was insane. Definitely not used to riding in so much mud but I’m glad we got it done for our country

Was this the first time for both of you to compete at the Motocross of Nations?
Rodriguez: It was my third time. I did Lommel and Ernee.

How would you compare this year’s event, to the last time you competed? Different atmosphere, similar?
Rodriguez: Comparing the two atmospheres is a bit difficult since they all had crazy amount of fans at the events and even though European fans and American fans are different there is something about RedBud that just makes it even crazier than usual [laughs].

Locurcio: Euros are crazy and RedBud fans are crazy to, so it was a very very cool experience to combine both of them. [It’s] Hard to say because there weren’t many chainsaws at RedBud! But I liked both. There’s always something special about [Motocross] des Nations and the vibe it gives you.

Let’s talk about this year’s track. We heard Team USA say this wasn’t the RedBud they’re used to. You both race here regularly, was the track super different in your eyes?
Rodriguez: It definitely was very different, but it all had to do with the weather. If they [would have] prepped it like they usually do for the nationals, we probably wouldn’t of been able to do 30 minute motos in there without blowing up the engine. So, overall I think the track crew did a great job, but yes the track was very different.

Locurcio: Track was definitely different from the national to last weekend. I believe weather had to do a lot with it and I think track crew did an amazing job with how much rain we got. But [it] definitely wasn’t the same RedBud!

Was it fun at all or just a beating the entire time?
Rodriguez: It was really fun for me but, unfortunately, I had some adversity and I didn’t get the results that I should have gotten, but that doesn’t mean it wasn’t a fun race. What kind of person doesn’t enjoy to play with mud? Maybe I just never grew up [laughs].

Locurcio: It was very fun until I took my goggles off! Then it became survival [laughs]! But track was very demanding but yet still was fun. Maybe not as much as the Euros but I had fun in my own way.

Talk about the team a little bit. What was the dynamic like? Are you guy’s friends or is this the first time you’ve really spent time together?
Rodriguez: I’ve been really good friends with Carlos [Badiali, MXGP entry] since I was like 6 years old and good friends with Lorenzo since I was like 12, so it was extremely nice to share such a memorable moment with them and to be able to make history that will be written in the books for the rest of the times. It’s an unbelievable feeling but imagine how much better it is to do with two of your best friends. I mean we spent three years together at MTF seeing each other every day so you could only imagine how deep our bond is.

Locurcio: It’s funny because we all actually used to live at MTF so we are friends, we just kinda went our separate ways so it was cool event because it felt kind of a reunion with all three of us back together. Everything was smooth. We all had the same goal even though we all had problems. I think it went well!

That’s awesome. Friends, sharing a memorable experience for your country. This was Venezuela’s best result at MXON, correct?
Rodriguez: Yes, as matter of fact qualifying to the final had never been accomplished before by a Venezuelan team.

Locurcio: We’ve never qualified before this weekend so it was the best result period! Plus, we finished 15th overall which is really good considering we had three DNFs!

Can you describe how cool that feels?
Rodriguez: It was an amazing feeling because that was our main goal but of course I also had my own personal goals and unfortunately I didn’t accomplish them so there was a lot of mixed feelings.

Locurcio: It felt amazing to give such an accomplishment and joy to our country and to everyone who made it happen for us to be at RedBud.

Be honest, did team Venezuela celebrate with the RedBud fans?
Rodriguez: Is that some sort of trick question?

What’s the craziest thing you guys saw at RedBud this past weekend?
Rodriguez: Some guy walking around with an American-themed thong, that was almost as shocking as some of the things I saw when I visited Amsterdam. It was also odd to see the whoop monster make an appearance somewhere else other than Millville.

Locurcio: I’d say the same it was pretty funny to see that guy walking around owning it in a thong for the USA [laughs].

Back to the racing real quick, then we’ll wrap this up. It had to be a cool feeling lining up on the same gate as Kevin Windham and Travis Pastrana this weekend. What are your thoughts on that?
Rodriguez: Dude, it was awesome! I mean just like a friend of mine said, when I grew up I didn’t look at Batman or Superman as my heroes, I saw Travis and Kevin as my superheroes, so I could say that it was an unbelievable thing to do to line up in the same gate as the guys that I saw as my superheroes when I was a kid. I mean I totally even asked Travis for a selfie and I fully almost panicked [laughs].

Locurcio: It was amazing! The fans where cheering on them so hard I cool feel it every time I was passing by them! It’s insane they qualified with so little preparation, kudos to them and also it’s a great cause they’re doing! Travis lined up next to me for the first moto and I was pumped on it!

Lastly, who would you like to thank?
Rodriguez: There is so many people that were involved to make this possible that the list is to long so I would like to thank the brains behind the whole plan, They are: Nicolas Cardona, Jackel Gonzales, Juan Carlos Balleza, Angel Fernandez, and Camilo Gomez. Then I totally need to thank Hans Corvers from Kemea for making it possible and the guys over at Star Racing for letting me use one of their bikes. I’m truly thankful for the kindness that this people showed to make this possible. I could never thank them enough. And thank you guys for taking interest in this story and for covering it.

Locurcio: There’s so many people to thank but the main ones who made it happen for me were Nicolas Cardona, Angel Fernandez, Jacquel Gonzalez, Juan Carlos Balleza, Edgar Martinez my mechanic, my family, Honda JM of Miami, TiLube Honda race team , All South Sprinkle Company, Storm Lake Honda, Buddy Brooks and my personal sponsors, Shoei , EKS Brand, Leatt, Alpinestars, Pair of Thieves, and everyone who pitched in to make Team Venezuela show up at RedBud! And of course you guys for the interview!

PS: A-Rod was able to get a selfie with Travis. It came out blurry because he was nervous, but he got it.