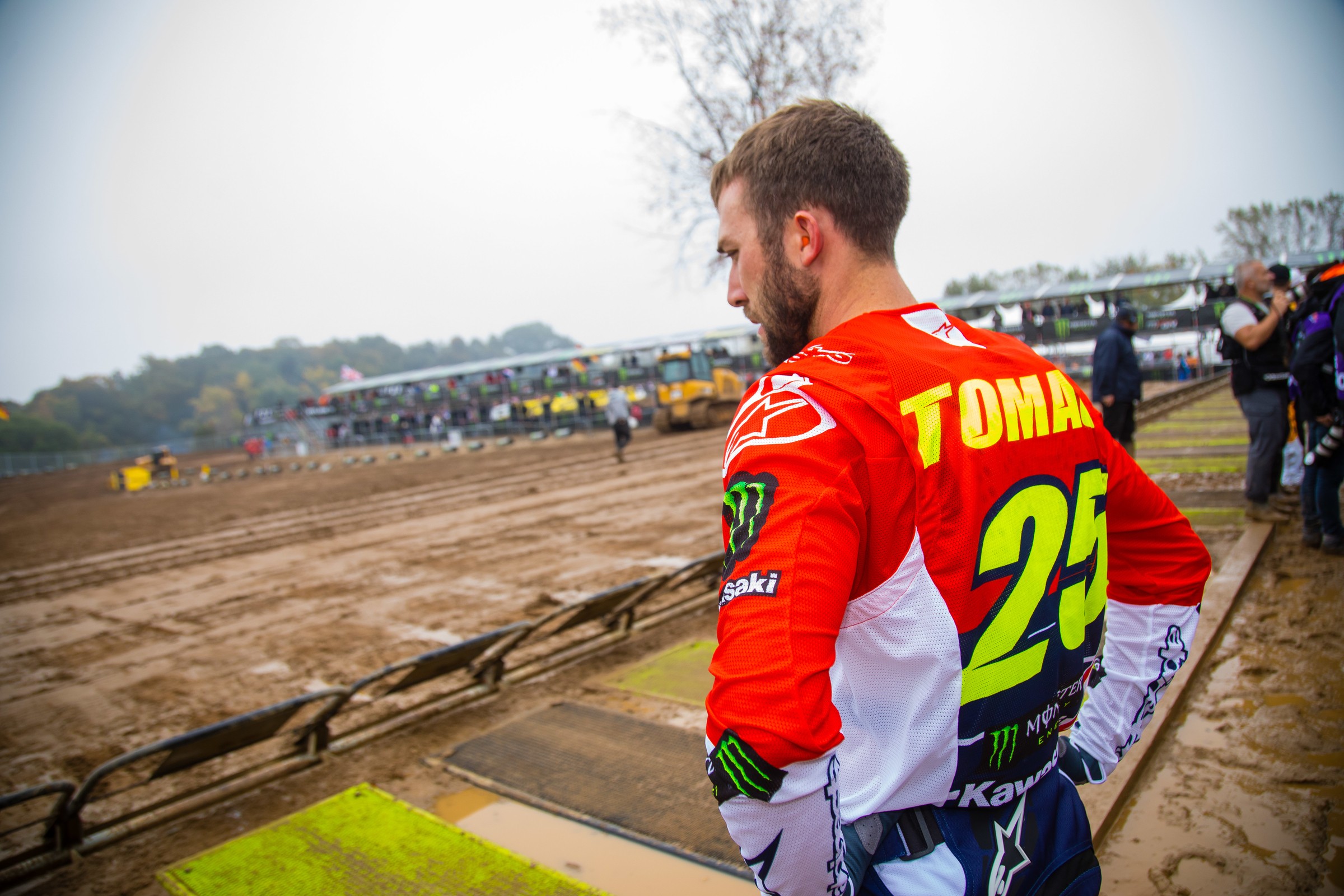 Tough weekend, right? I am still scratching my head as to how things went so wrong. I still feel this is the best Motocross of Nations team the USA has sent in several years and I also still feel that on a dry, typical RedBud track, Team USA would have looked much differently. Having said that, there were several factors and missteps that led to a sixth place finish. This race requires strategy, preparation for every variable, and the very best performance one has to give. I just don’t think we got it right on multiple levels. I doubt anyone feels worse about the result than the riders themselves, so I don’t think it’s fair to take shots at them. I know that’s inevitable for some of the fans that paid their hard-earned money to see us win. I just won’t be one of those doing it. I will, however, share the questions I have, observations I made, and mistakes I think we made.

The first issue was the starts. While it’s easy to say “we got bad starts,” that’s a very obtuse analysis of the overall problem. The poor starts began on Saturday when Team USA’s qualifying position suffered due to Eli Tomac’s mechanical problem and Aaron Plessinger’s big crash over the uphill double. Team USA could have gone into Sunday with top three starting spots all day long, putting them into the coveted inside gates in every moto. Instead, they qualified ninth, giving them average gate picks and ensuring the second rider would be to the far outside each moto (29th). The GP-style starts are designed to make gate picks more valuable, which increases the intensity of the Saturday qualifying races. In a regular race here in the U.S., picking ninth wouldn’t have been quite as bad—but either way you have to then play with the cards you’re dealt. That leads us to the next situation.

Once the ninth place qualifying fate was sealed, there were still opportunities that Team USA missed. In both race two and three, there were gates on the very inside left open. I don’t know if this was on purpose but I have a feeling it was simply overlooked in the fog of war as riders jockey for spots. The simple fact is that Team Netherlands saw this and because of it, had BOTH of their riders on the inside of the last moto. Herlings grabbed Holland’s good gate, but yet somehow an inside gate remained open by every other team until it was Coldenhoff’s turn to pick, and he slotted right in. That just CAN’T happen. Both riders started at the front and off they went, finishing 1-2. Team USA started outside of the top ten again, stacking the deck against a good moto score.

I saw another strange situation was with Tomac’s rear tire in the final moto. Most of the elite were trying to use clean, dry wheels for the grate start. Some changed wheels after the hot lap, while Barcia even skipped the parade lap entirely to preserve his tire and bike. After the site lap and wheel change, the mechanic would then lift the rear of the motorcycle and carry it over to the grates, keeping the rear wheel perfectly clean. This was done by several riders/mechanics in unison. Tomac, on the other hand, did neither. He had a muddy, wet wheel/tire coming off of the parade lap but didn’t switch his wheel. Then, as his wheel sat in the mud, his mechanic then picked up the rear and walked it over. Keep in mind, the wheel was already soaked. Eli then did a burnout on the barrier to clean the mud off but the damage was done. The tire was wet and prone to spinning. It was very puzzling and three days later, I still can’t figure it out. The only possible thought I can conclude is they decided the burnout would clean and dry the tire good enough to negate any moisture. I don’t know if that is true or logical but there isn’t really any other reason I can point to. In any case, it seemed like every other relevant team felt differently and just did an entire wheel change after the parade lap to ensure the cleanest and driest tire possible.

Another puzzling factor in Sunday’s sixth place finish was Aaron Plessinger. He just wasn’t able to muster any sort of positive result. His first moto looked like it had a chance but a crash and inefficient goggle change relegated him to an 18th place finish. His second moto was a tiny bit better with a 16th, but it wasn’t anywhere near what his competitors were able to log. The top MX2 riders in race two were all at the front, that’s the difficult part to swallow, and Plessinger, by the way, was given Team USA’s best gate pick. Hunter Lawrence finished second, Jorge Prado finished third, and Ben Watson finished fourth. That’s three MX2 riders that Plessinger needed to be battling with. Instead, he suffered a poor start and never really pushed ahead of 15th or so. It was a head-scratching day for Plessinger, forcing Team USA to use a 16th place finish in their score. The tough part of that is when compared to the MX2 score that other teams used. France used both of Dylan Ferrandis’ scores (seventh and eighth), Italy used Michele Cervellin’s first moto (tenth), Team GB used Ben Watson’s second moto (fourth), and Spain used both of Jorge Prado’s motos (third and third). That’s where it really hurts Team USA because most had high hopes for Plessinger to put in a low score in the mud. Being forced to use a 16th as his best moto just leaves no room for any sub-par result from anyone else. I fully expected more from Plessinger and seeing MX2 riders in second, third, and fourth in that moto proved that it was possible.

Another weird situation was in the final moto. For some reason I have not been clued into, Justin Barcia ran a tube instead of the typical mousse setup for the rear tire (the mousse is a flat-proof foam tube). I am not sure why this choice was made, my only reasoning would be simple preference by Barcia himself. Some riders prefer the “feel” of tubes and argue that traction is improved over the mousse. Most have made the switch to mousse in recent years, though, as technology has improved giving riders a more positive feel with the reliable mousse. Whatever the case, Barcia’s flat single handedly moved Team USA from fourth overall to sixth overall with the lost positions in the final laps.

Lastly, the overall conditions absolutely played a role. Most American riders don’t practice in conditions like that. Winter weather is full of supercross laps for Team USA. Winter weather is full of muddy, sandy motos for the MXGP contingent. The track that everyone raced on Sunday was very commonplace if you’re an MXGP regular. Riding during the winter and springtime for most involves bouncing around to tracks in Belgium and Holland. Those tracks are sand and mud. RedBud was sand and mud. That’s not an excuse as Team USA was probably our best mud/sand team regardless. I don’t think we would have picked the riders  any differently had we known what conditions were waiting. My point is that we simply aren’t as well versed in conditions like that. The MXGP riders spend months perfecting their skill set for a day just like Sunday. The American riders simply don’t. The American series focuses on supercross during that same time period and by the time motocross becomes a focus, that wintry mix is long gone in lieu of heat and humidity. It was a perfect track for the MXGP riders to display their prowess.

When all is said and done, Team USA simply got beat. Beaten strategically, beaten on the starts, and beaten on the track. Team USA deserved the sixth place finish we received in my opinion. Team USA isn’t the sixth best team but on that day, they were. That’s just how racing goes. Judgments will be made from one day of racing. I hoped that Team USA would show up and fulfill their potential but it wasn’t meant to be. It wasn’t really a heart-breaking day as much as it was a head-scratching day. Team USA was never really in contention at any point. Strange, but true.