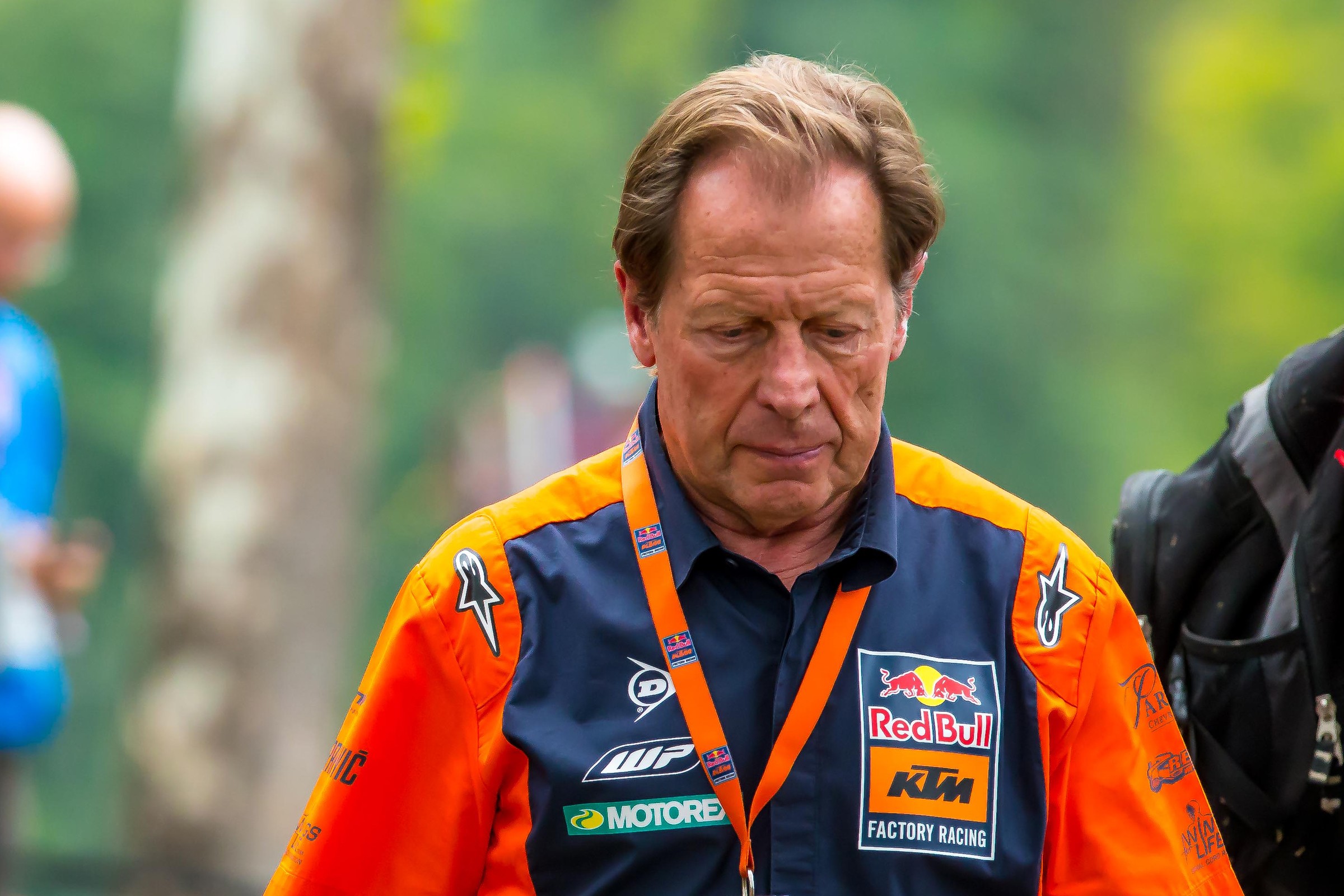 Tuesday morning, September 12, 2018. Glen Helen Raceway. San Bernardino, California. Roger DeCoster alighted from a glossy black Chevrolet pickup truck and walked over to a small group of industry people. It was sunny, dry, windy, and the Glen Helen track was in optimum condition. That was all done by design, as Eli Tomac, Justin Barcia, and Aaron Plessinger, as well as the race teams they compete for, had gathered to begin sorting things out for the fast-approaching Monster Energy FIM Motocross of Nations at RedBud.

As history has taught all who follow this sport, when it comes to the MXoN, DeCoster has been there, done that, and bought the t-shirt. Still, it was relatively easy to ascertain that this year’s edition of the race is of tantamount importance to the natural-born Belgian. In fact, all day on Tuesday it was readily apparent that the MXoN is of great importance to all of our riders and team members—and certainly the Yankee fans.

How is it all going? How did it all come together? Can we win? We asked The Man to grab a seat at a concrete Glen Helen picnic table and provide us with a flyover of where it’s all at. Even now, three weeks out, one could tell DeCoster was nervous, excited, worried, and hopeful about the race that just may be the biggest in U.S. motocross history.

Racer X: Roger, you spearheaded the American Honda effort of 1981 when our guys—Johnny O’Mara, Donnie Hansen, Danny LaPorte, and Chuck Sun—pretty much made the Earth stand still by winning both the Motocross and Trophee des Nations. Thirty-seven years later, what does this year’s Olympics of motocross mean to you?
Roger DeCoster: It means almost as much as then because people have short memories. You know, it’s been six years since we won, and that’s a long time. Also, it being at RedBud in the U.S. at a very nice facility, I’m sure there is going to be a good turnout of fans, and I think that’s going to help with the energy of the riders and everything else. I’m pretty confident that there is going to be a really good turnout there.

I thought for sure the 2018 race would be held in California. When it was announced that RedBud would hold the Motocross of Nations in October, I was a little concerned because at that time of year the weather can be real dicey—it snowed when I went there once as a kid—and so many people in that region are so into football. I was wrong. Long story short: RedBud is shaping up to be a spectacular event.
I think that track and that facility makes a lot of sense. RedBud is in the middle of the country for all of the fans. It’s also pretty convenient to get there from Europe. There are a lot of direct flights from Europe to Chicago. That’s also a good thing. And you know with the Ritchie family that the track is going to be prepared 100 percent and that they will do a good job with parking. I know that they have already rented some other lots nearby in case there is a huge crowd. I’m sure it will be an event that we will be able to be proud of. All we have to do now is go win.

I think it’s really cool that the old, long-gone Trans-AMA series, which matched the elite American racers against the best Grand Prix riders every autumn, ran at RedBud in the seventies. I mean, I was on the snow fence at those races watching you compete on the Suzuki.
Yeah, I got snowed on there a few times. And it was about the same time of year the Motocross of Nations will run next month. Bad weather can happen, but the weather has to be really, really bad for the track to become really bad. It can absorb a lot of water, and Tim Richie is really good with the track, even if it rains in the days leading up to the race; he’s really good of kind of protecting the track.

Has the Team USA team manager role changed in recent history? The sport is so professional and serious now. Is it different working with the different team riders?
There are so many more people involved now. The teams have more personnel now. There are specialists for everything. There is the ECU guy, there is the suspension guy, and there is the engine guy.

It’s a bit like car racing now, huh?
Yeah, it’s becoming almost like car racing. When we did it the first year back in ’81, it was all Honda, so in some ways that made it easy to be like a team because it was one brand and one team. Now we have different brands and all that.

As far as Team USA in 2018, you were heavily involved in the selection process. Are you happy with the three-man team we have?
Yeah, I’m happy with them. Eli has been fantastic in the outdoors and he has speed and he has condition—the guy can go as fast on the last lap as he can on the first. Barcia has been having a really good season and he has been really positive. He raced really well on the RedBud track at the national there. Aaron—you know Aaron, they were ready to go from early on. It’s nice to have him on the team. I’m sure everybody on the team is going to give it 100 percent.

Did the national at RedBud last July play a critical role in choosing the three members of the team?
I cannot say if it was 50 percent in the decision or if it was 20 percent, but it was definitely a factor. We wanted to see how they performed there, and all three guys were awesome that day.

Did a lot of thought go into class selection for the team?
We talked a little bit about Eli going in the Open class. It would have been mainly from a fitness point of view. We all know that he is super-fit, but Justin has been good at the end of the races also, so we thought that maybe we should just keep it standard. Otherwise, some people may think that he shied away from Jeffrey Herlings.

Being that you were on ten straight victorious Belgian Trophee des Nations teams from 1969 through 1978, as well as six Motocross des Nations team, I wanted to ask you this question: With all the pressure and wanting to win so badly at the des Nations, did a racer like yourself, or even a racer like Tomac or Barcia, thrive off all of that on race day?
Yeah, I think that when you’re top in your sport, you enjoy the challenge, you know? It’s much more enjoyable to have a fight against somebody that is really good and win than it would be to just go there and win without any pressure. It would not feel the same, you know?

There is certainly a lot to be said about being defined by your competition.
Yeah, exactly. Yeah, Ricky Carmichael against Stefan Everts in Belgium at Zolder. We had some good years. Ryan Villopoto at Budds Creek. He was unbelievable. I think that was probably the best race of his life. As far as being a spectator, that was unbelievable, the way he rode the 250 there.

To win the MXoN is a very big deal to any of the American racers. It’s a big deal to them, especially after they retire. I’ve had everyone from Johnny O’Mara, Jeff Ward, Ron Lechien, Rick Johnson, Broc Glover, Jeff Stanton, Damon Bradshaw, and Ryan Villopoto say that the Motocross des Nations victories meant as much, or even more, to them than the championships they won.
I think that’s the case. I can remember as a rider, and even before I raced, I was very interested in the Motocross des Nations. When I was a kid, the Swedes and the English were dominant. I remember in the early sixties, the Swedes all crossed the finish line together. I think at that time there were five riders on each team, and all five of them came across the line abreast. Unbelievable.

So who is going to win this thing? Is it a toss-up?
My feeling is that the Netherlands could be the biggest challenge. That’s my gut feeling. We all know how good Jeffrey is and how fast he has been. He’s going to go for the win. I know his character and all that. And [Glenn] Coldenhoff has been consistent. He is like a five, six guy. And [Calvin] Vlaanderen has come around really good at the end of the season. He is strong and got better and better as the season moved it. I think they are going to be tough and have nothing to lose. They have less pressure than we have.

Were you surprised with the drama inside the French camp? I mean, they have talked a lot about how camaraderie and teamwork was instrumental in their four-year run of the MXoN.
Yeah… We’ll see, you know? I don’t want to say they made the wrong decisions because we still have to wait. They’re a still good team. They have confidence because they have been winning. We will have to be real careful to think as a team. If we get to the last moto and we’re good in points and there is a big fight between Eli and Jeffrey, I think we need to play it safe. We need to think as a team. We can’t let individual pride get in the way.

You talked about that a lot in the past. All along Team USA’s run at the MXoN, you’ve talked about how you admire how the American racers can come together and win as a team. Thoughts?
It’s pretty amazing to me that the Americans can be so competitive and hate each other all year and then they just flip and become one. I think it’s because the guys really want to win, and they get it. They know they can’t win if they don’t work as a team.

You work for Red Bull KTM and have been involved with the American team for decades. There are no KTM riders on the team in ’18. There is also a competitive energy drink sponsor (Monster Energy) backing the U.S. team, yet you’re here. This race means a hell of a lot to you, doesn’t it?
Yes, this race is really important to me, and I think it should be important to everybody involved in our sport, from the fans to the manufacturers and the sponsors. We should be thankful to see how much money the companies like Monster and Red Bull and even Rockstar put into our sport. Without them, the sport would not be what it is right now. It would be a lot smaller. It’s not like we have sponsors lined up to take over their spots.

Last question—and I’m going to put you on the spot—how is Jeffrey Herlings going to do come race day?
I think he is going to be really tough to beat.

He’s a different character. Then again, the really good ones always are.
Yeah, he’s different. He is very, very focused on winning, winning, winning. I don’t know if part of it is because he is Dutch and he likes to make that bonus money! [Laughs] But you know what is really different with Jeffrey? He’s such a homebody. When the race is over, he wants to go home right away and go riding. That seems to be working really well for him.