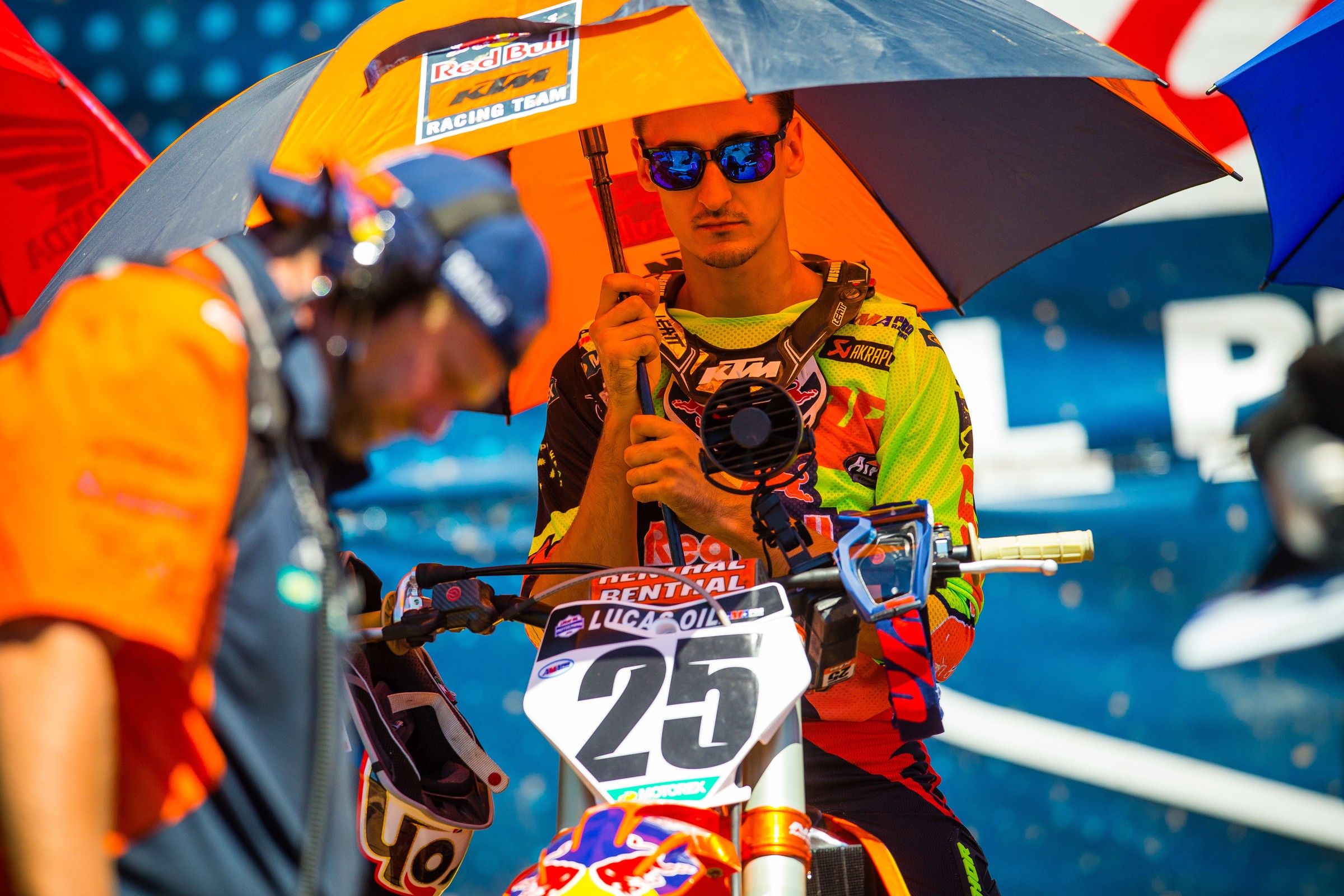 Insight The Man Who Won’t Be There

When Marvin Musquin received the news that he would not be part of Team France for the 2018 FIM Monster Energy Motocross of Nations at RedBud, the shock set in. Once he was past that, he had to go back to focusing on battling for the Lucas Oil Pro Motocross Championship and the upcoming Unadilla National. He won that race in the 450 Class, as did fellow Frenchman Dylan Ferrandis in the 250 Class. When Ferrandis won, Marvin was there at the finish to congratulate him. The two were planning on working together, Marvin expected to be named to Team France all along, especially after winning the RedBud National this summer.

“Yeah for sure, it was a shock. For a couple minutes, I could not believe it,” Musquin said last week on an episode of DMXS Radio. “There’s not much to say about, but that’s their choice. There is the team manager [Pascal Finot] but there is also the president of the French Federation [Jaques Bolle] that makes the decision. But we [Bolle] never communicated together, and I think that was the problem. I have a good relationship with Pascal, but unfortunately in the end, he is not the one who makes the decision. Yeah, it seemed pretty clear and sure for me that I would be on the team, but they made a different decision, and that’s the way it is. I can’t control that.”

Once he was not named to the team, plans changed. Since he knew he wouldn’t need to race, Marvin went on a one-month non-riding vacation. Romain Febvre suffered a concussion at the MXGP of Turkey soon after, but it wasn’t clear if he would recover in time for the Nations. When Febvre announced that he couldn’t compete, Marvin was a candidate again—but he had already told the team he would not return as a replacement.

“[When they first told me I would not be on the team] Obviously they asked me, could they call me if someone gets hurt?” he explained. “But I said, ‘Well you pick me now to be on the team or you don’t. I’m going to stop riding and training for a whole month. You can’t just call me a week and a half or two before the race—I won’t be ready.’ And that’s what happened [when Febvre got hurt], and that’s a bummer because it could have been awesome from the beginning.”

“It was a while [before they asked me] because they weren’t sure if Febvre would be able to race or not,” Musquin explained. “So it was too late, but anyway, I was already clear when they didn’t pick me that I changed my plans for that. They didn’t pick me, so I had different plans. Yeah, once again it was Pascal who called, he’s the only person that I talked to. A couple people tried to convince me, but I’m clear—that’s the way it is, they didn’t pick me the first time I said, ‘If you don’t pick me now, I’m going to take time off and I won’t be 100 percent.’”

Insiders from the French side have said the team wanted to keep the team chemistry that has led the squad to four straight victories at the event. Also, there were mentions of Marvin’s motivation for the event, since it would take place over a month after the U.S. National motocross finale. Gautier Paulin and Romain Febvre have been on the last three victorious teams together, and you could argue that all three of those victories were saved via Febvre’s heroics (Musquin, by the way, was on the 2015 team as the MX2 rider alongside Febvre and Paulin). So that could be the sole reason the team originally announced Paulin and Febvre as its 450 riders, or it could be because of something else. It’s impossible to claim the French Federation simply doesn’t pick American-based French riders because Ferrandis is on this year’s squad, and Musquin was on the team in ‘15. Musquin himself has no idea what happened—he’s not sure how the team selection works, exactly.

Marvin hasn’t ridden on a motocross track now since the conclusion of the Ironman National, and now that he’s back riding, he has gone back into supercross prep. The only items on his off-season list now are trying to take another Monster Million at next weekend’s Monster Energy Cup, then the Paris Supercross in November. That race will present his chance to get some honor in front of the French fans. Unfortunately, it’s his only opportunity this year to do something for his country. Had he had been picked to the Motocross of Nations team in the first place, though, he would have been ready.

Sign up for our newsletter and never miss updates from our new site.