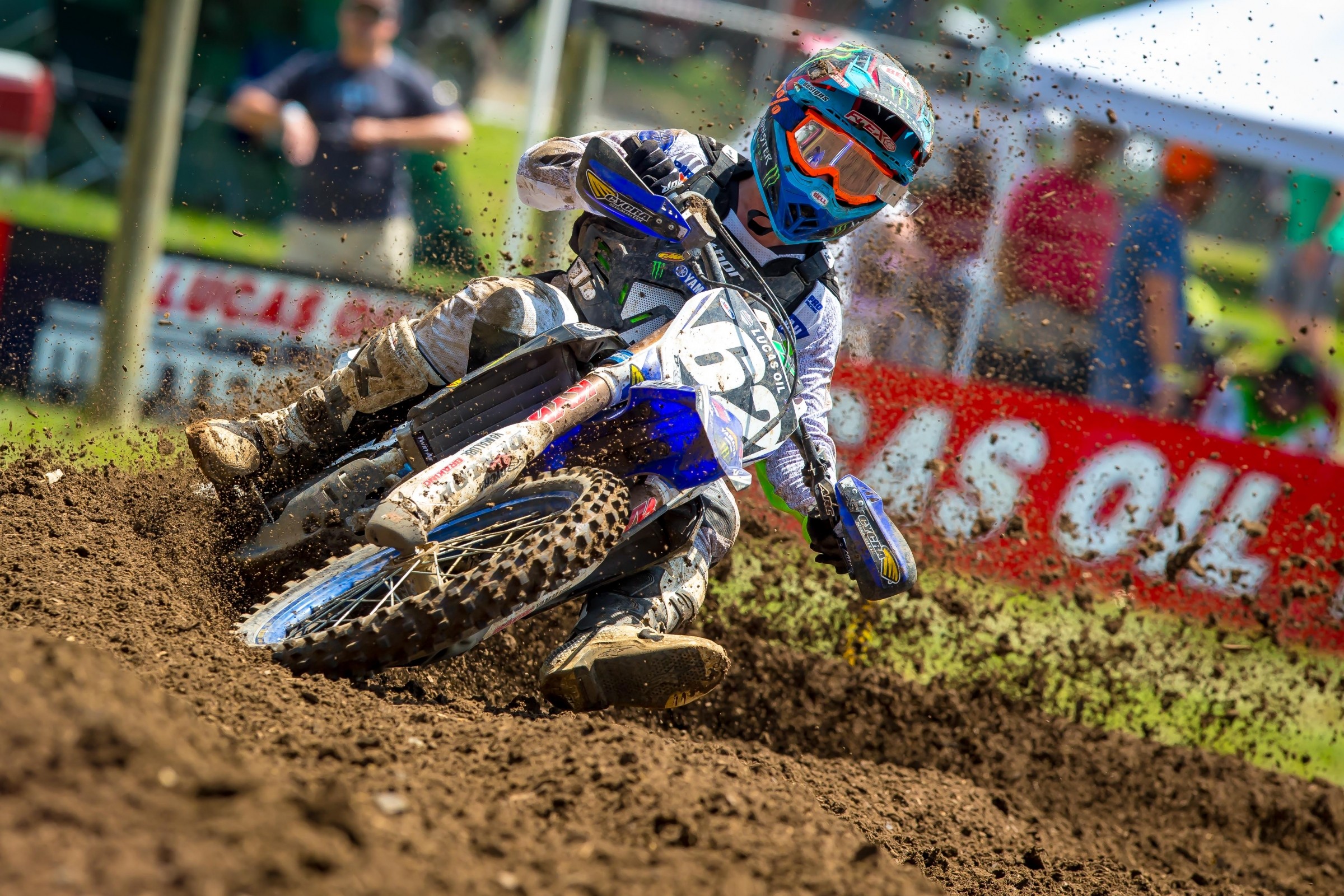 Monster Energy/Yamalube/Star Racing Yamaha’s Justin Cooper is straight out of Cold Sprigs Harbor, New York, a small, humble metropolis of 5,070 inhabitants situated point blank on the North Shore of Long Island. Really nothing much of a motocross community, for Cooper and his working class family, it was what they had to work with as far as his amateur career went and they made the absolute best of it.

A true rookie during this 2018 Lucas Oil Pro Motocross Championship, Cooper, who ran three AMA Pro Motocross events in 2017, has executed a masterful assault on the brutally competitive 250 Class this far this summer, an indelible highlight coming for the New Yorker when he powered across the Thunder Valley finish line +04.242 seconds clear of Jeremy Martin to win the first moto of his fledgling career.

Backed up with a second moto eighth in Denver, Cooper found himself up on the podium for the first time in his professional career.

“I just need to believe in myself,” he mentioned to me a few hours later. “I really do think I can keep winning in this class. I had to do it the hard way coming through the amateurs. I just have to keep the same mindset week-in and week-out and not let anything get in my head or defeat me here mentally.”

A fighting fourth in 250 Class, Cooper is now looking to Saturday’s Southwick National to further ratchet up the critical mass he has generated throughout the first 20 motos of the ’18 Trans-American moto tour.

Racer X: Justin, just what are you up to here in Southwick, Massachusetts, on this Friday afternoon before tomorrow’s round of the Lucas Oil Pro Motocross Championship?
Justin Cooper: Just doing some press day riding and out here getting a feel for it and seeing how the track is.

How does everything look? How does the weather look?
The weather is looking good; it’s looking to be a hot one. It’s definitely a good sign because I’m a good sand rider, so I’ll enjoy it tomorrow and have some fun.

Where did you learn to ride the sand? New York?
Yeah, there were a lot of sand tracks. There were sand pits around us and I would always go there after school. I mean they were close, so we’d just go there and do some 30-minute motos and get out of there.

Three hours away? I’m assuming you’ll have friends and family lining the fences here come tomorrow.
Yeah, I’ve got all the family coming out for this one. This one is probably even closer to Unadilla for us. Yeah, I’ll definitely have all the family here rooting my one. It’s a sand track and I’m really looking forward to this race.

Ten motos into it all and you’re fourth in the 250 Class of the Lucas Oil Pro Motocross Championship. You’ve also won a moto and have hit the overall podium three times. What do you think?
Yeah, I just caught my first piece of bad luck last weekend in that second moto at Muddy Creek. I have a good ten motos so far. I’ve been really consistent and we’re shooting for a podium every time out. I’m also getting closer and closer to that overall win.

Your starts have been fantastic. What do you attribute that to?
I knew the starts were going to be important this year. Everyone is going fast. I don’t know… The bike is super-fast this year and we worked on a lot of starts before the season, so I credit that to the whole team for putting in the time on that. I’m also one of the lighter kids out there I think, so that might give us a little bit of advantage. We’ll take it and we’ll keep getting these starts.

Like you alluded to, Muddy Creek was a bit of a mixed bag for you last Saturday, huh? You placed second in the opening moto, but slotted in at 28th in moto two.
It was awesome. I was first in both qualifying sessions, so I had the first gate pick and I was feeling good going into the motos. I had a strong ride the first one, I just kind of settled into second there behind Jeremy [Martin]. I was really good with everything in that second moto and was looking for the overall, but unfortunately we tangled up in the first lap and that was kind of the end of my day. There was nothing and no one to blame on that one. You just go back and do the work for the next weekend and hope things play out a little bit better.

You’ve run up front the entire season. Whether it was against Martin or Plessinger or Forkner, you’ve been rock solid up there. From what I can see, nobody has intimidated you at all. You ride up there like you belong there.
Yeah, I was getting a lot of confidence in my speed even before the season, so I didn’t really expect to be anywhere but up front. All those guys are doing the same thing that I’m doing, it’s just who wants it more. Just gaining experience is important for me.

You spoke to me quite a bit during the off-season about getting used to that 30-minutes-plus-two pace of the 250MX motos. How has that been for you?
The thing was is that I didn’t think it was going to be an all-out sprint like that. I just didn’t expect it to be a sprint. I expected the track would get a little bit rougher so everyone would get a little bit more tired, but everyone is so fit now and so fast and everyone is out there to win, so basically you have those 35 minutes and you have to be up front early to be up there to contend for the win at the end of the motos.

So you have to tell me how it was to win your first AMA 250 moto when you made that happen at Thunder Valley in Colorado.
It was unreal. The whole last lap I had a pretty decent gap, so I didn’t have to really enjoy it and do a little bit of a parade lap I guess you could say. That’s all that was going through my mind. It was kind of surreal that I was about to win my first moto. Yeah, the moto started off perfect. I got the holeshot and was there for twenty-five minutes. That was my goal the whole time. I didn’t want to give the lead away like I did at Hangtown. I stayed up front for what I thought would be the whole moto, but Joey Savatgy got around me real quick. I rode a good, solid moto and pulled away from all the other riders and I was really happy to get that moto win.

And you’ve been very consistent. Not many guys on the gate in the 250 classification can say that.
Yeah, the thing is that I’ve been getting better every weekend. It’s only getting better. Now, I expect to be a regular podium guy. In the beginning of the season I was still trying to figure out some stuff and figure out what worked and what didn’t. I also learned what really needed to happen in order to go out there and podium and win these things. Yeah, I think we’re getting better and better. Yeah, we’re just going to keep moving forward and get more and more experience and try to go for the win.

Do you get the sense that you’re starting to build a fan base across the United States by making your presence known at these races?
Yeah, in reading some of the social media stuff, I’m pretty popular and getting a lot of fans this year. It’s cool. I just want to keep my focus and keep doing exactly what I’m doing. It seems to be working.

Being a first year guy and with your eyes wide open, what do you make of the competition in the class?
They’re all good riders. Obviously, they’re the best in the country. I don’t think much of them. I just try to focus on myself and I know what I’m capable. I just want to keep going out there and proving I’m going to be up there and that I’m going to be a force to be reckoned with. I don’t really let any riders get to me out there. They don’t intimidate me at all because I know they don’t have much on me. I just want them getting into my head and I try and focus on my own thing and what I want to accomplish.

Dare I be so bold, there haven’t been too many standout rookie riders in recent years. That withstanding, you’re really the standout of the class thus far. And as we have talked about in the past year, you’ve had to do everything the hard way: earning it.
And that’s just it. I had to earn everything the hard way and that’s what’s made me so good coming into this first year. A lot of guys have their futures set and sound for them, but I think they just get a little bit lazy with their programs. This past year and a half, coming from amateur, I knew that I basically had to win everything in order to get a pro ride. I’m really self-motivated and I think that really helps me. Now I’m pretty confident that I belong up there. Maybe I have something that some others don’t. I just have to keep learning because I don’t have the experience of racing with all these guys yet. Every weekend is new to me and I’m going to try and keep better and better and keep getting more and more confident as we go. It’s been real important for me to get these results in the races and not just going fast at the local tracks when the stopwatches are out.

There is a very big difference between a real AMA Pro National and a Stopwatch National, isn’t there?
Yes. Very big (Laughter).

Right on, Justin. You sound very confident and tuned-in. In closing, how is the second half of the season looking to you at this halfway point in time?
I did the last three nationals last year, so I’ll be able to go right into those races. The others, like Washougal, I’ve never been to. It’s not a big deal to me. At Thunder Valley, I never rode there and I podiumed that race and I also won a moto. Then I went to high point. I never had ridden there before and I podiumed there also. I’m going to keep the ball rolling I guess you could say.