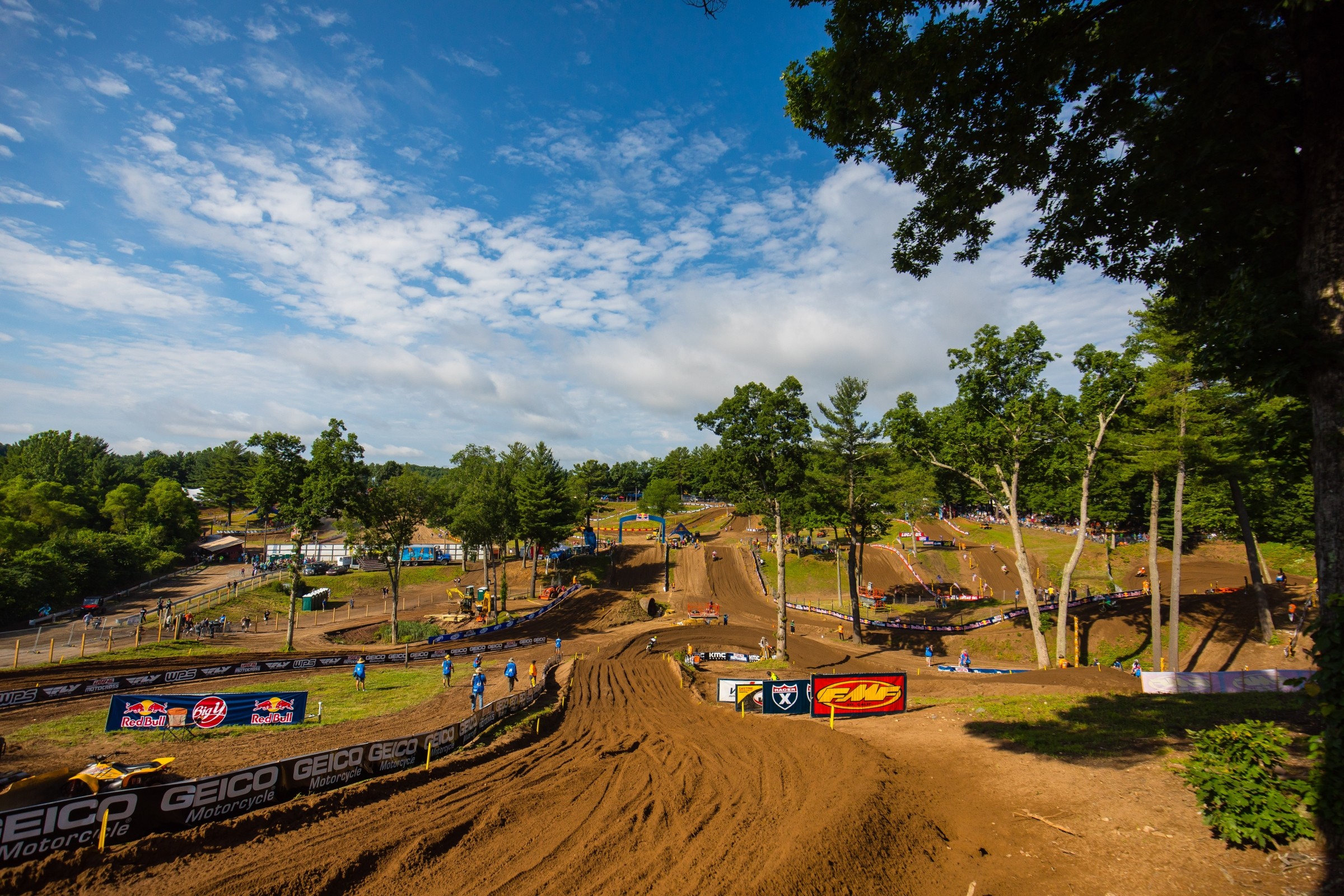 To the sand we go! Southwick, Massachusetts, is home to round six of Lucas Oil Pro Motocross. The only true “sand” track on the calendar, Southwick boasts some of the most loyal and vocal fans in the USA. With a strong NESC series pumping out talent for the last 30 or 40 years, Southwick, or “The Wick 338,” as it is now known, has its own unique feel. There is no other race that has had more local influence in the results column than this one.

With several races held here every year (I have seen up to 16 in a season before), the local riders have this track absolutely dialed. They show up in droves to battle America’s best, often putting their names into the top ten of timed qualifying. The qualifying schedule puts local riders out there in the best possible conditions, and we have seen it pay off time and time again. Even though the final results might fall back into the mean, this race is absolutely the best chance for the nationally unknown rider to jump onto the big stage.

The track itself is a tricky one. Although it is a sand track, the base is harder than most would assume. That hard base creates a slippery feel and hard, sharp bumps. There are still the big sand rollers that form throughout the motos, but the typical bump is more choppy than rolling. In recent years, new management has brought sand in to try to recreate the deep sand that Southwick boasted in the seventies, eighties, and nineties. That missing sand was carried out on the bikes and bodies of riders over the years, leaving the hard base in its wake. Tracks like Unadilla faced this same dynamic, losing the topsoil that made the track great. Kudos to guys like Keith Johnson and Mike Grondahl for taking steps to improve and rejuvenate the magic of Southwick’s former characteristics.

For the past couple of years, Eli Tomac has put on a clinic at this race. In Ken Roczen’s magical 2016 season, this was one of only two rounds where Eli was undoubtedly the best rider of the day. In 2017, it was more of the same for Tomac. He took it to the field, forcing Marvin Musquin into a huge crash—and some would say, a crash that cost Musquin the title. With Eli’s five straight wins this season, it’s hard to see him not running away with yet another one. History says this is a race he will dominate. For the others, this round marks the halfway point and time to make a move. Regardless of the struggles or successes thus far, it’s time to turn up the intensity.

For the 250 Class, it’s pure chaos. We have lost two red plate-holders to injury this season and we aren’t even to halfway yet. Aaron Plessinger had what most would consider a tough day in Tennessee with a 9-5 score, but he still increased his points lead. Alex Martin had a huge opportunity to close down the points gap, but two crashes ensured a sleepless night on Saturday, coupled with the scary injury to his little brother, Jeremy. Further back, Justin Cooper went down hard in the Jeremy Martin crash and lost a gaggle of points along the way. It’s becoming a war of attrition—more a process of elimination than a race to the championship.

Which Southwick local jumps off the qualifying results page?

Will Jason Weigandt catch the start of the moto? (See: 2011 Southwick)

Can Alex Martin find the final 1 percent he needs?

How will Justin Bogle and Cooper Webb do in their return?

Can Eli keep the streak going?

Dylan Ferrandis won the second moto at Muddy Creek and served notice that he will be a contender from here on out.

Mr. Eli Tomac has won every overall of the season. Winning every race deserves respect, hence the “mister.”

Every NESC racer and fan is coming in hot. These people lose their minds at the Wick.

I was in Vegas for a week leading up to Southwick. With temps at 111-plus degrees, I was very, very HOT.

Justin Barcia led laps at Southwick and was in position to win the overall for a long while. Justin is in contract talks for 2019 and beyond, and rides like that can only add value.

J-Mart had a huge crash in the second moto and left Muddy Creek needing surgery on his L1 vertebrae and is out until for the remainder of Lucas Oil Pro Motocross.

Joey Savatgy just can’t seem to find the rhythm he is looking for. He is fast enough to win races, and if things were smoother, could be right in this title fight. Whether it’s crashes, bad starts, or mechanical issues, Joey is just having a tough go.

Ohh man guys ☹️ Incredibly disappointing to have my season end like this. This title was mine and I was finally back to the old j mart. But this is apart of being a professional motocross racer. I have been getting the best care and support here in Bristol, My surgery went well and we are on the road to recovery. Thank you for all the love and messages and to all the fans that come out and support me at the races and support all of us riders. I will be back on a bike before to soon and blessed to have the best team in the pits @fchonda behind me.... ?

My blood pressure borders on medically impossible levels in the final moments before PulpMX Fantasy picks are finalized.

Jason Weigandt gives me bad fantasy intel that he thinks is super solid.

I find a way to waterproof my phone, unlocking a mountain lake/adult beverage/NBC Sports Gold app combo that will be unbeatable for all Saturday afternoon experiences.

Echoes of “Jimmy DEEEEEE” and “The Rippaaahhhhhh” chants are heard for miles in every direction.