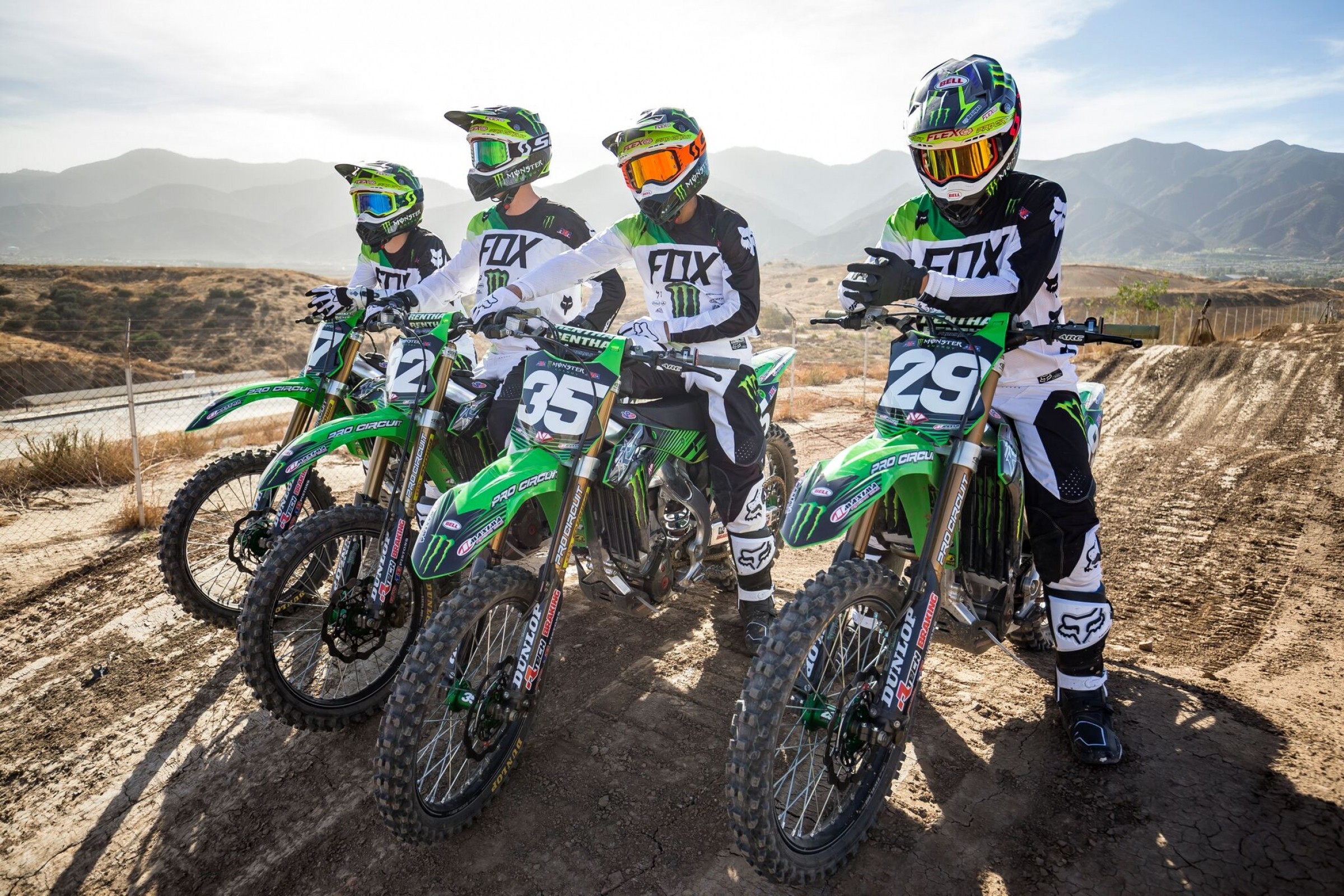 Comment: Savatgy has pointed out of the 250 class in Monster Energy Supercross, so this could be his last year on a 250 in Pro Motocross. He finished fifth in points with four moto wins in 2017.

Comment: Davalos will miss the entire Lucas Oil Pro Motocross Championship due to a torn MCL in his knee and a neck injury.

Comment: Forkner broke his left collarbone in Minneapolis , but has been back on the bike and will race Hangtown. He missed the last five rounds of the championship last year due to a concussion.

Comment: Due to a torn ACL sustained at Indianapolis Supercross in 2017, AC will miss the entire Pro Motocross season. He underwent surgery after the 2018 Monster Energy Supercross season finale in Las Vegas.

Comment: The Utah native will make his pro debut for the team at Hangtown. Marchbanks won eight titles at Loretta Lynn’s during his amateur career and in 2014 was named AMA Youth Motocross Racer of the Year.

Comment: The two-time 250 Class champion won three motos and finished a distant second in the championship to Osborne in 2017. He is entering his second year with GEICO Honda.

Comment: Craig will race the 450 Class for Honda HRC in the place of injured Cole Seely.

Comment: Hampshire will return to racing at Hangtown after fracturing his T3 and T4 vertebrae and some ribs, and sustaining some “small punctures/lacerations to the lungs” in Daytona.

Comment: After missing the first three rounds last year, Sexton came back to finish 12th overall and claim Rookie of the Year honors.

Comment: McAdoo will miss the first few rounds of the championship due to a shoulder injury sustained in a practice crash.

Comment: Martin missed a majority of Monster Energy Supercross after fracturing his wrist in San Diego, but will be back for Hangtown. He missed the last four rounds of the Lucas Oil Pro Motocross Championship in 2017 with a broken collarbone, but was running second in points before the injury.

Comment: Cantrell finished 14th overall in the 250 Class in his rookie year.

Comment: Smith missed nearly all of the 2017 Lucas Oil Pro Motocross Championship due to a back injury , then later a foot injury sustained at High Point.

Comment: Alix raced the 450 Class with the team last year and finished 14th overall. He will race a 250 this year.

Comment: A-Rod was signed to a supercross-only deal with the team and will not contest the Nationals. Instead, he will fill in for the injured Vsevolod Brylyakov on the Kemea Yamaha Official MX2 team in the FIM Motocross World Championship.

Comment: Osborne was expected to move to the 450 Class for Lucas Oil Pro Motocross, but that changed earlier this year and he will defend his #1 plate. He’s won three (two 250SX; one 250 Pro Motocross) championships in the last year and a half.

Comment: Mosiman missed all but four rounds of his rookie season last year due to a shoulder injury. He finished 22nd in the championship.

Comment: The Florida native will make his pro debut with the team at Hangtown. Bailey won seven titles at Loretta Lynn’s during his amateur career.

Comment: No exact timetable on Decotis’ return has been announced. He sustained fractured ribs and vertebrae in a crash at Daytona.

Comment: Nicoletti will race select rounds in the 450 Class with the team as a fill-in for the injured Justin Bogle.

Comment: Peters was supposed to fill in for the injured Jimmy Decotis, but sustained a torn ACL and MCL in Minneapolis and will miss the entire season.

Comment: The Brazilian will make his pro debut at Hangtown , filling in for the injured Decotis. Lopes, 18, originally from Lajeado, Brazil, has won 11 Brazilian National Championships and finished runner-up at Loretta Lynn’s twice during his amateur career .

Comment: The current 250SX West Region champion finished fourth overall in 2017, but had four motos where he scored zero points.

Comment: The native of France is entering his second year racing in the U.S. for the team. He recently signed a two-year extension to remain with Monster Energy/Yamalube/Star Racing Yamaha. His status for the opener is still yet to be decided at this time after he broke his arm and injured his jaw in Atlanta.

Comment: Nichols broke his humerus for a second time since December in March and missed the rest of supercross. No timetable has been announced on a return, but he’s expected to miss at least the first couple rounds.

Comment: Oldenburg tore his MCL and ACL in a practice crash in April. No timetable on a return has been announced.

Comment: The 2017 AMA Horizon Award winner raced the last three rounds of the championship with the team last year and scored second place in just his second career moto in the mudfest at Unadilla. He missed all but one round of supercross due to a concussion and rib and shoulder injuries.

Comment: Traders Racing was on a supercross-only program in 2018. They will not be racing Lucas Oil Pro Motocross.

Comment: 51Fifty is a supercross-only team, but they will help Chisholm for the first two rounds in the 450 Class. He will rest the remainder of the rounds on his own, but the team will provide bikes and parts for him throughout the championship.

Comment: Taft and the team parted ways after supercross.

Comment: Mellross comes over from the 51Fifty Yamaha team. The Australian doesn’t have much experience racing motocross in the States. He raced a couple rounds in the 450 Class in 2016 and the entire series in 2015 as a privateer.

Comment: Coming off a very successful 250SX East Region campaign, the New Jersey native will make his debut outdoors with the team at Hangtown.