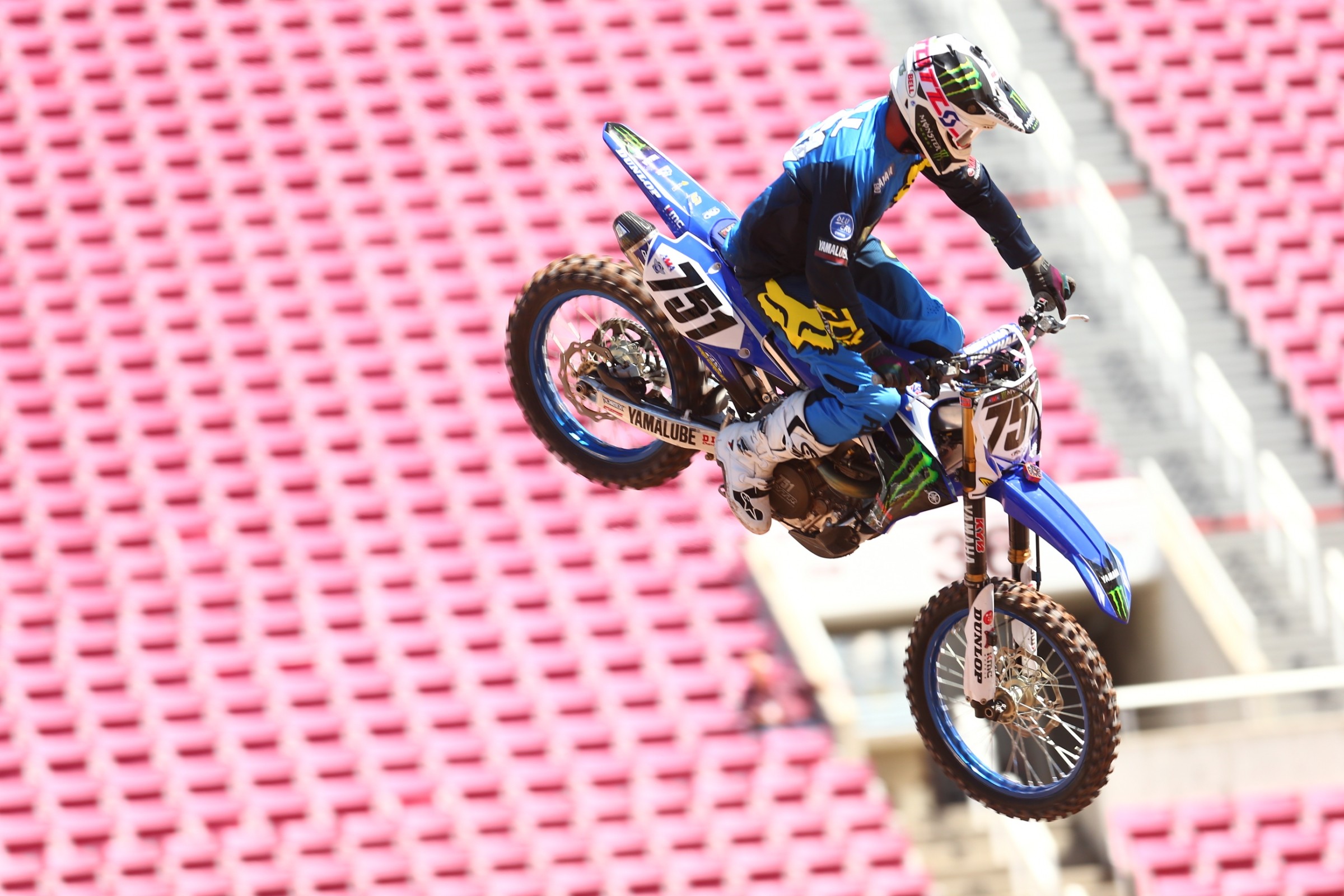 Between the Motos Josh Hill

Back in the first century a Roman philosopher named Seneca allegedly etched into marble the adage, “Luck is where the crossroads of opportunity and preparation meet.” A racer who has recently been subscribing to that theory is 28-year-old Josh Hill.

Having been called out of retirement to race Justin Barcia’s Monster Energy/Yamaha Factory YZ450F three weeks back at swampy CenturyLink Field in Seattle, Washington, Hill, while not racing since, has been riding and training all along. And because of the times that we’re in with riders getting inured at an alarming rate, once again Hill will suit up this afternoon to race at Rice-Eccles Stadium in Salt Lake City, Utah.

Can he get lucky and post up a top ten or even top five result? Well, he’s been working away in an effort to be standing at the crossroads come time to walk to the starting gate and hear the roar of the crowd for the 450SX heat races on Saturday.

Racer X: Josh, so you’ll be behind the starting gate this weekend…
Josh Hill: Yeah, with Cooper [Webb] getting here they needed to fill that spot, so they gave me a call. They had already given me a bike to get ready for the Vegas Supercross. I wasn’t sure where I was going to go with their program. I didn’t know if I was going to be just parked behind their semi or underneath the awning. I didn’t know what the whole program was. I was just kind of riding and just trying to get myself into better shape. When I got the call to go racing, I was already kind of preparing for it. It’s all pretty good. I got more time on the bike and got more comfortable.

So you’ve been riding the last two weeks?
Yes. They didn’t have a bike coming for me yet, so they ordered me a bike and then they dialed it in with good suspension and I was just riding that thing stock with a Pro Circuit pipe and good suspension. I was just burning laps and burning laps and then last week they brought the real race bike out again for me and I just kept burning laps. It’s been good. I’ve just been riding out at the Yamaha test track a bunch. If I’m not there then I’m riding out at Brian Deegan’s supercross track and his little compound over there.

How do you feel? Since you’ve been able to put a lot of time in on the bike, do you feel like you’re in pretty good riding shape and do you feel good with the motorcycle?
Well, I’ve been putting in a ton of work. I mean I’ve been riding bicycles and working out off the bike, while on the bike, I’ve been trying to put in as many structured motos and laps as I can. It’s been fun. I had been racing for so long that I wouldn’t say that I disliked doing it, but redoing it again now, man, I’m enjoying the process of trying to get back into shape a lot more than I used to.

Absence makes the heart grow fonder, huh?
Yeah, exactly. I mean it’s like you go out and you suffer a little bit, well, not a little bit, you suffer quite a bit. Towards the end of my career I wasn’t enjoying the suffering that much, but now I am, man. It’s been cool because I’m seeing results. The curve has been going pretty good for me. I feel good when I ride. Every day I’m riding I’m doing more laps and getting more consistent. When you’re seeing that type of gain, it’s hard not to have a good time.

Despite the hard rain falling and subsequent quagmire conditions at Seattle, you rode well and were actually pretty competitive. All things considered, how did you feel that night?
For Seattle, I really was not prepared. I could ride, but I hadn’t been riding a lot of laps on a supercross track. I think I only rode four or five times before the race and that’s all I’d ridden all year as far as supercross goes. I felt pretty good at Seattle. I mean that Yamaha 450 does a lot of the work for you. That thing is nice. It’s really fast and handles really well. It’s a good bike and it made it a lot easier on me. The mud race was a mud race. It was a quagmire! It was probably one of the stickiest mud races I’ve ever raced. Your bike had to weigh about 50 pounds more when you pulled off after the race. You’d be okay the first couple of laps and kind of feel like you could ride the bike okay, but then the bike would just get so heavy that it was hard to ride. I qualified really well in the heat race [Hill placed sixth] and I was running third in the main event up until the third lap and went down. That was a bummer but it was so fun just to be back up in the mix and racing with these guys. I’ve been coming to the races the last three years since I quit and being there and hanging out with everyone because I was working with Monster, but get back behind the gate and line up and do battle was a blast. I missed that feeling.

Yeah, not too many guys retire and then get to come back out a couple years later and race in front of 45,000 fans again. I’d assume that had to be a pretty big rush for you, huh?
Well, I was extremely excited to have that job and opportunity at Monster when I did quit back in 2015, but then I’m almost more appreciative for the opportunity to get back on the bike. I definitely owe a lot to the guys at Monster Energy for giving me these opportunities. It’s not cool for Yamaha that one of their riders got hurt, but it’s cool that they gave me the opportunity to race on a Monster-sponsored team. It’s awesome and I really lucked out to fall into an awesome situation. I’ll try to make the most of it and definitely enjoy it while it’s here. This is for fun, man. I get to go out there, and like you said, race in front of 45,000 people again and I get to battle with all these guys that I either grew up battling with or watched them grow up. I’m just here loving that rush of being on the gate and lining up and banging bars and just doing this again. It’s unreal to be on the factory equipment again and racing all these guys. I can’t believe I’m back here and I’m enjoying every second of it. For me right now, it’s whatever I make of it.

You’ve told me some cool and even funny stories about Justin Barcia back when you guys were racing as amateur kids.
I remember this one event… It was Mosier Valley, Texas. Justin had to be about 10 years old and he was number 51. He was riding around on a KTM 65. They used to have a big bicycle track out there and kids would be out there riding pit bikes all day. The one thing with Justin then was he would be out on his 65 all day long and riding around the pit bike track with everybody and just ripping around. He was doing that ALL day. I remember you’d just hear the 65 ripping around the pit bike track and it would be him out there just riding all day. I swear he’d go back, fill up with gas, ride to the line and race his moto and then he’d be back out on the pit bike track with a big old smile riding around getting in battles with older kids and even older men. It was pretty funny. He was always a character. I’d talk to him and then he’d ride over and wave every time he saw me. His gear would always be dirty because he’d be riding the pit bike track all day. He enjoyed riding, for sure.

What if Yamaha asked you to do some of the Lucas Oil Pro Motocross Championship races?
Oh, I’m not opposed to it. I’ll say it again: For me, I just love the challenge. It’s so fun to be back out here doing this. It’s not do-or-die for me. if I had the opportunity to race the outdoors for factory Yamaha, I would definitely do it. It’s pretty cool that this opportunity kind of rekindled the friendship with Yamaha and all that. I think I’m probably going to be staying on-board for a little while.

Okay my man, just what are you hoping to achieve at Salt Lake?
I want to get a good start and I want to run up front for as long as I can and I want to bang bars with the best of them. Basically, my whole goal is not to roll over and not to make a fool out of myself. I just want to show everybody I’ve still got what it takes and show that to myself too. Obviously, I don’t want to get 21st, but there are a lot of fast guys out there. If I can run up front and just see where that takes me, that’s all I want to do. I just want to get out there and get a good start and just run with them.