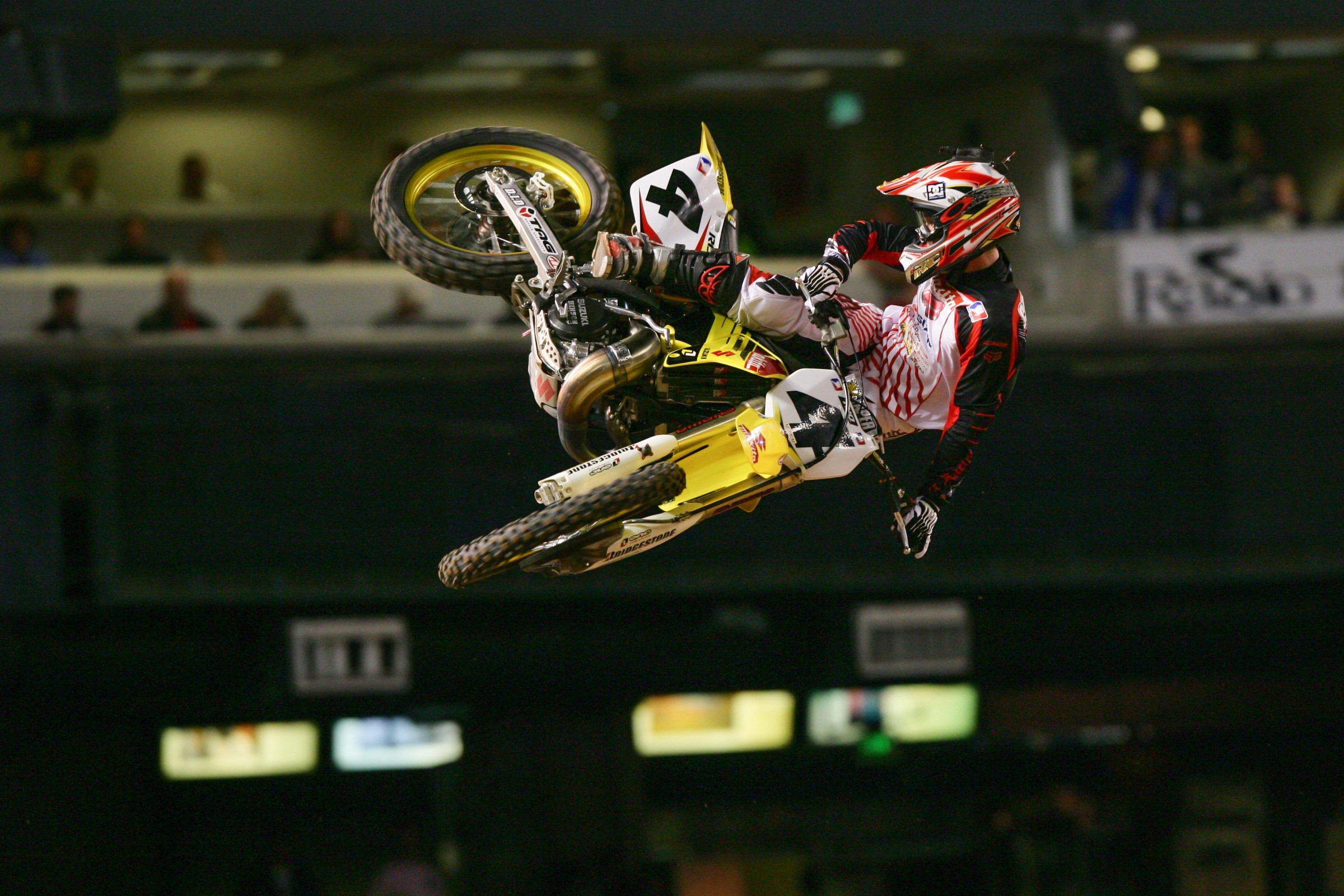 Exhaust: This is Where We’re At

Am I seriously writing about Ronnie Mac for the third time in a week? Is this just where we are now? What in the mother of hell happened over the last few weeks to where Ricky Carmichael, the greatest dirt bike racer of all-time, is now matched up with someone who doesn’t even have a resume and possibly never had any previous employment to list on it, and yet somehow no one even seems angry about it? This is the internet, the Kingdom of Anger. The Nation of Outrage. RC is as real as real ever was—a look at the scoreboard was his best version of trash talk—while Ronnie exists somewhere around midnight in the garden of good and evil.

RC says he’s bringing his 2005 AMA Supercross Championship RM250 to Australia, so we’ve got a works bike from the zenith of two-strokes against a Craigslist special. In fact, we can’t even be sure if Ronnie is actually bringing a bike. Isn’t it entirely possible he would just use Craigslist Australia (if that’s a thing) and put out feelers for a local 1998 CR250R? Two-strokes are easy to fix, right?

In the age of angry internet, you’d think ‘Ole Ronnie would have created a fire storm of love and hate, with detractors bringing pitch forks over his kids-can’t-watch-it-anymore values and also the general comedic value of a comic character competing in actual races (of some sort). Yet, there’s only a very small batch of such complaints. The buzz continues, and while Ronnie is built to absorb all by saying “love me or hate me I’m still in your mouth” there really hasn’t been very much hate.

That’s because he’s tapped into the single collective thought brewing in the back of everyone’s minds for the last five years—where did the fun go? Every fan asks the same questions only to see them run into the brick wall of hard answers. They want more personality, more crazy and fun, less technology, cost and seriousness. People don’t want to hear it’s about the business or the money or the schedule or the program. They don't want to hear riders robotically thanking sponsors. They want to hear about swashbuckling types that will show up anytime, anyplace, anywhere on anything and just put their balls on the line. That is the realm only retired riders and internet playground legends can live in. Everyone else has 10 more scheduled and scripted weeks until Anaheim, plus, they have to thank those sponsors to pay the bills.

Ronnie’s Craigslist special CR250R is thus the Back to the Future time machine everyone wants to see hit 88 MPH (but routinely topped out at 69 MPH in his “Mac to the Future” movie). A two-stroke from the 1990s? Good Lord, the ‘90s! When everyone had money, people were getting along, terrorists were barely a thing, and even professional motocrossers understood the weekend warrior desire to hit the hills. Ronnie has tapped all of that, to the point where even the irony of riding Honda’s first-generation aluminum-framed rattler has turned from junk to joke to Jesus. Not everything was great back then, but 20 years has a way of softening the rough edges of that massive twin-spar alloy frame. Any adult riding today can think of the ‘90s and tell some story of a killer riding area that isn’t open anymore, some bike they love that isn’t offered anymore, and some life situation they can no longer recreate. History always helps. Were podium interviews any better back then? Nope. A lot of stuff was really the same. But we know we got older and maybe even better, but we didn’t get any more fun. That’s really just life. But it’s so easy to complain, right?

What’s even worse? Solutions just bring up more serious problems. Electric bikes could hold promise because they can be ridden anywhere (and at sane, safe speeds by simply pressing a button), and because costs will surely drop as the technology improves. They’re a logical solution to get new people into the sport or bring old hands back in, especially as electric motors begin to blur the lines between mountain bikes and dirt bikes. Imagine the thrills of going riding but in a much more convenient package? Imagine non-stop takeouts with your buddies on a backyard motocross track? But there’s an elephant in the room. Even if electric bikes get good enough, should they be considered fair or legal to race against gas-powered bikes? Didn’t the last great shift to four-strokes go terribly wrong with unintended consequences?

Okay, maybe the solution is to just bring the two-strokes back, but that’s littered with serious potholes, too. We’re in a vicious cycle here, and I’m not talking about the 1998 CR250R. The industry will tell you it’s not selling bikes and bringing in new riders like it used to. That makes them less likely to make huge investments and take risks on blowing up an existing model. I know every arm chair motocross economist believes bringing two-strokes back will solve all  sales ills, and that it's downright criminal that companies can complain about bike sales while simultaneously trying to prevent a shift back to two-strokes. Two-strokes are the very answer to the problems, you say! Well, actual business people know that's just a guess and a risk. It will also flush millions of the development dollars spent on four-strokes—spent during a very difficult time for the industry, I might add—right down the drain. Further, the four-stroke motocross switch was made slightly easier because technology already existed on some other engineer’s bench. How did Yamaha create a 400cc motocross prototype? Basically, build a single-cylinder version of an existing four-stroke sport bike. To go back to two-strokes? That department is probably in moth balls. Just imagine Kawasaki in 1987 making two-stroke dirt bikes, ATVs, and Jet Skis, and the MotoGP bikes were two-strokes, too. Now the ATVs, Jet Skis and MotoGP are all four strokes. See what I mean?

Plus, you can’t hate on the OEMs too much. They are still doing their best to prop up the existing racing model, providing us with gates full of factory rides and athletes looking like heroes because they make a living as racers. Anaheim 1 is going to look fine. Hangtown is going to look fine. They still spend more money than anyone else to keep this deal going. So don’t kick at that stool too much. The legs aren’t as tight as they were 10 years ago and if we lose one, this whole thing comes toppling down.

I’ll put it this way. A generation ago, the AMA Superbike Championship went through an ownership change and made sweeping rule changes. They just happened to coincide with the recession and major sales slumps and budget cuts. A senior team staffer told me about this process. “I told them [the series] that my bosses were asking us to cut 30 percent from our total racing budget, and road racing just happened to take up 30 percent. I told them not to tempt me to just cut it right there, but they did.”

In other words, when the industry isn’t flush with cash but the teams are still willing to keep giving, it’s not the best time to kick them in the face.

Wow, depressing, eh? This is what I mean when I say “Solutions just bring up more serious problems.” These crazy two-stroke races and Ronnie Mac and Instagram distance us from those tough questions and answers. Of course, most problems go away when you don’t live in the real world, and the races are one-day, off-season events with zero championship implications.

Wait a minute? Is this stuff getting all this play just because it’s the off-season? Perhaps so. Let’s enjoy the fun for a minute and get back to the real deal come Anaheim. Because after that race, we’ll be debating who looked fast and who will win the championship. Not as much stuff has changed as you think.