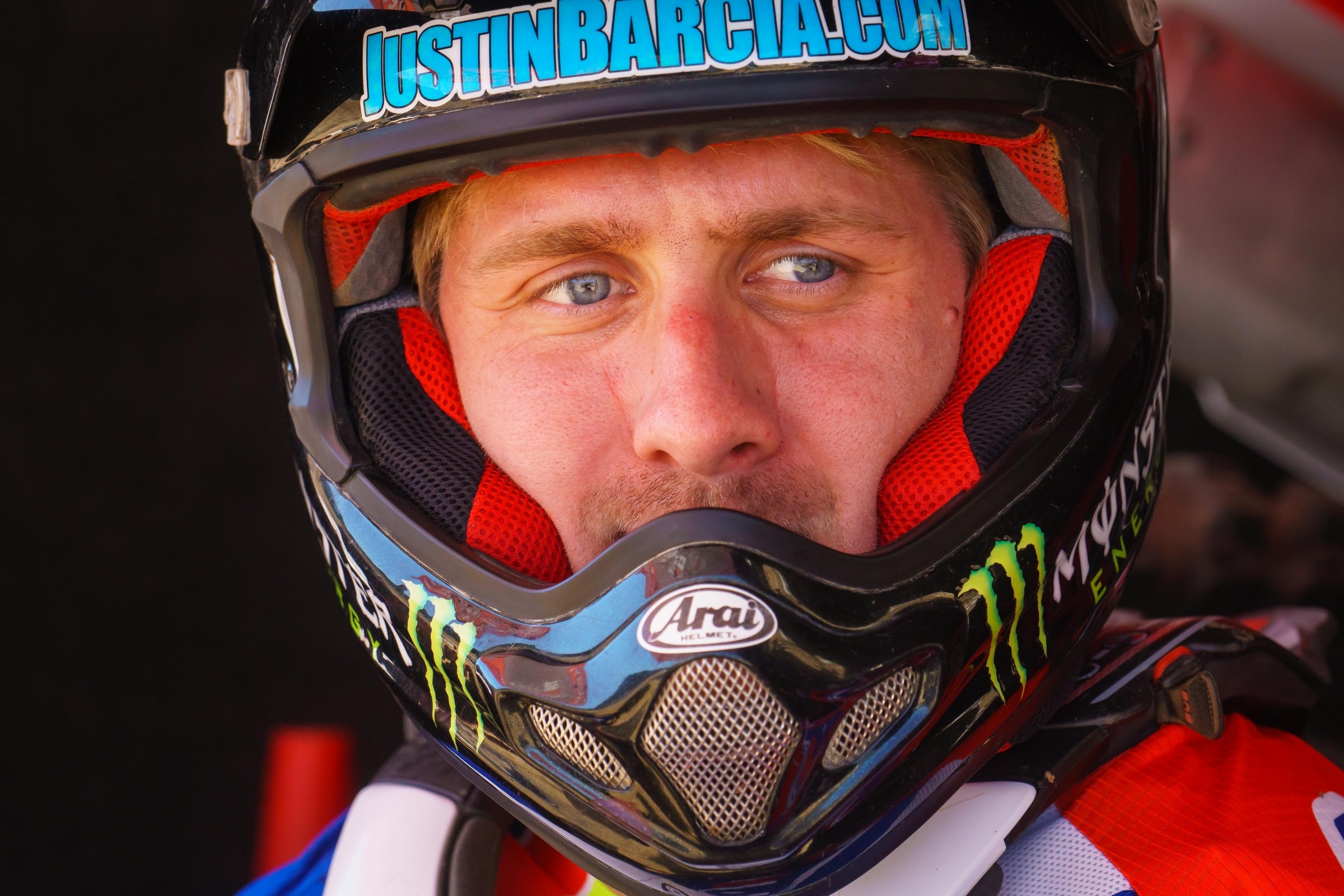 As Steve Matthes outlined earlier this week, when the U.S. Open returned in 2011 rebranded as the Monster Energy Cup, the hope was to entice European riders—Antonio Cairoli, Jeffrey Herlings, etc.—to compete by taming down the track, removing whoops, and making it a supercross/motocross-type event. It didn’t work because the Euros didn’t come—for the most part. The one European rider that has always expressed interest in competing is Tim Gajser. The two-time world champion was expected to race the last two years but didn’t make the trip due to injury. In recent years Gajser has expressed interest in racing full-time in the U.S. and his abilities to master supercross is surely a big sticking point. Yes, the Monster Cup isn’t a full blown supercross track like Anaheim 1, but it’s definitely supercross-ey enough to see how Gajser can adjust. We’ll see how he does in his debut on Saturday.

Barcia Back on Honda

Back in 2012, Justin Barcia, coming off two 250SX East Region titles, made his 450 indoor debut with factory Honda at the Monster Energy Cup. He posted 2-1-2 scores that night, topping the likes of Ryan Dungey, Ryan Villopoto, Chad Reed, and more, to win the event and claim a cool $100,000. A few months later, Barcia won his first career 450SX race in Phoenix. He’d win again in Seattle later that year en route to Rookie of the Year honors. Not much has gone right for BamBam indoors since, as he’s dealt with injuries, team, and brand changes and generally just hasn’t generated the results expected since that amazing debut. (He has collected two 450 Lucas Oil Pro Motocross wins since 2013, but none in supercross.) A la another former 250 AMA champion—Dean Wilson— Barcia has invested in himself, hoping to reclaim past glory. Barcia is back on Honda, putting together his own effort for the event. “I’ve had a tough couple years,” Barcia said in a recent Yoshimura video. “People just don’t know what’s going on. ‘Maybe he’s over it?’ No one knows, but clearly this shows me … going and putting all this together shows that I love racing dirt bikes and obviously I want to get back to where I think I belong.” This weekend could be big for Barcia heading into 2018 as he’s yet to announce a deal.

This is the seventh year of the MEC, so you should be familiar with the format, but if you’re not, here’s how it works. There are four qualifying sessions (two each for A and B), with the top 18 riders transferring directly to the three 10-lap main events. The remaining four will be determined through the LCQ (five laps). There will be three 10-lap main events. If any rider is able to sweep all three mains, they’ll win $1 million dollars. That’s only happened once—Ryan Villopoto did it at the first MEC back in 2011. If there isn’t a sweep, the overall winner gets $100,000 (not exactly chump change).

The Amateur All-Stars and Supermini Classes will have two practice sessions (no LCQ) and run two six-lap main events. The best combined score from each of their two main events gets the victory.

Since its inception the Joker Lane has essentially served two purposes: creating confusion amongst the riders (a la Ryan Dungey and Ryan Villopoto) and bringing race strategy into a sport that previously had very little. This year brings another twist: no longer will the Joker Lane serve to impede riders; no sir, this isn’t your grandfathers Joker Lane. This year, the Joker Lane is faster than the regular section of race track, so it will help riders gain an advantage. Jason Thomas laid out a few examples how this could change things, so I’ll refer to the former racer there. Still, this should be a cool twist added to the one-off race.

The MEC serves as a preview of sorts. We’ve seen Ryan Dungey make his KTM debut at this event, Justin Barcia and Eli Tomac jump up to the 450, and just last year Ken Roczen debuted with Honda. The sort of de facto start of the 2018 season is this weekend, which means we’ll see riders with new teams and brands. Justin Bogle is still with Suzuki, but will make his debut with AutoTrader.com/Yoshimura Suzuki. His former RCH teammate, Broc Tickle, is making his Red Bull KTM debut. Jordon Smith is jumping up to the big bike. And, as we mentioned above, Justin Barcia is back on Honda. Davi Millsaps, who was expected to make his debut with Monster Energy Factory Yamaha, is out due to injury. Which rider do you expected to have the most success with their new team/brand?

Since the Monster Energy Cup returned in 2011, no rider has won the event twice. Ryan Villopoto, Justin Barcia, James Stewart, Davi Millsaps, and Ken Roczen have all failed to repeat as winners. Defending champion Eli Tomac can make history if he scores the overall for a second-straight year. Bigger than that, he’d like to sweep all three main events and get the big bounty. “You know, that would be amazing and that is something I’m definitely gunning for,” Tomac told our Eric Johnson when asked about winning the Monster Million. “Shoot, every year I’ve gave it my all, but I feel like we have a good shot this year. If we get three good starts and give it our all—and with the way that our supercross season was going—I think we have a really good base setting for supercross now.” On paper, Tomac is certainly a favorite this weekend, but as we’ve seen in the past, it doesn’t always translate into a win at this event.

Coming off a 2017 Monster Energy Supercross season in which he earned two wins and eight additional podium finishes, Red Bull KTM’s Marvin Musquin is certainly in contention to earn his first Monster Energy Cup overall this weekend. Hampered by a knee injury for parts of Lucas Oil Pro Motocross, Musquin is expected back at 100 percent. Musquin had a disappointing finish to his SX season in Vegas in May (finishing a season-worst 22nd), but he’s had previous success inside Sam Boyd Stadium, winning the 250SX Shootout in 2015. Can Marv get it done this weekend?

Back in the Saddle

It was a rocky end to the 2017 season for Rockstar Energy Husqvarna’s Jason Anderson. He tweaked his back prior to Southwick; he sustained serious road rash on his hands when he crashed on his bicycle; and then he finally pulled the plug four rounds early to have a plate removed from his foot—from last year’s Motocross of Nations crash. Prior to the injuries, Anderson was enjoying one of his best seasons outdoors, winning two motos and really bringing the fight to Marvin Musquin, Blake Baggett, and Eli Tomac. Notoriously not the best starter on regular tracks, Anderson has done well with the MEC’s elevated start (like we’ll see this weekend) grabbing three consecutive holeshots in 2015 to claim a new Toyota truck. Anderson was also the race winner the last time supercross came to Vegas, back in May. Can he nail down his starts again and win in his return to racing?

The start will once again feature split starting gates (which haven’t always turned out as planned at this event) with 11 racers on each side. There will be 44 feet of separation between the two ends, with the starting gate elevated 12 feet above the ground. Once again the riders will launch from metal grates (instead of dirt), which is a track change rumored to be staying for the full 2018 season. We’ll see who makes the quick adjustment this weekend.

Another wrinkle in the one-off event is the inclusion of amateur riders. The event will again feature two amateur classes—Amateur All-Stars and Supermini—with some heavy hitters featured in each class. The entry list in the Amateur All-Stars class is stacked with up-and-coming talent, including Amsoil Honda’s Jo Shimoda; Team Green Kawasaki’s Lance Kobusch, Garrett Marchbanks, and Seth Hammaker; KTM’s Orange Brigade’s Derek Drake, Pierce Brown, and Mitchell Falk; and Husqvarna’s Jordan Bailey. Although Amsoil Honda’s Carson Mumford is out for the Supermini class, it’s still populated with plenty of talent including Jett Reynolds, Max Vohland, Talon Hawkins, Matt LeBlanc, Jordan Jarvis, and more. You may not know these names now, but keep an eye on these riders this weekend, they’ll be filling the starting gate at Anaheim 1 soon.