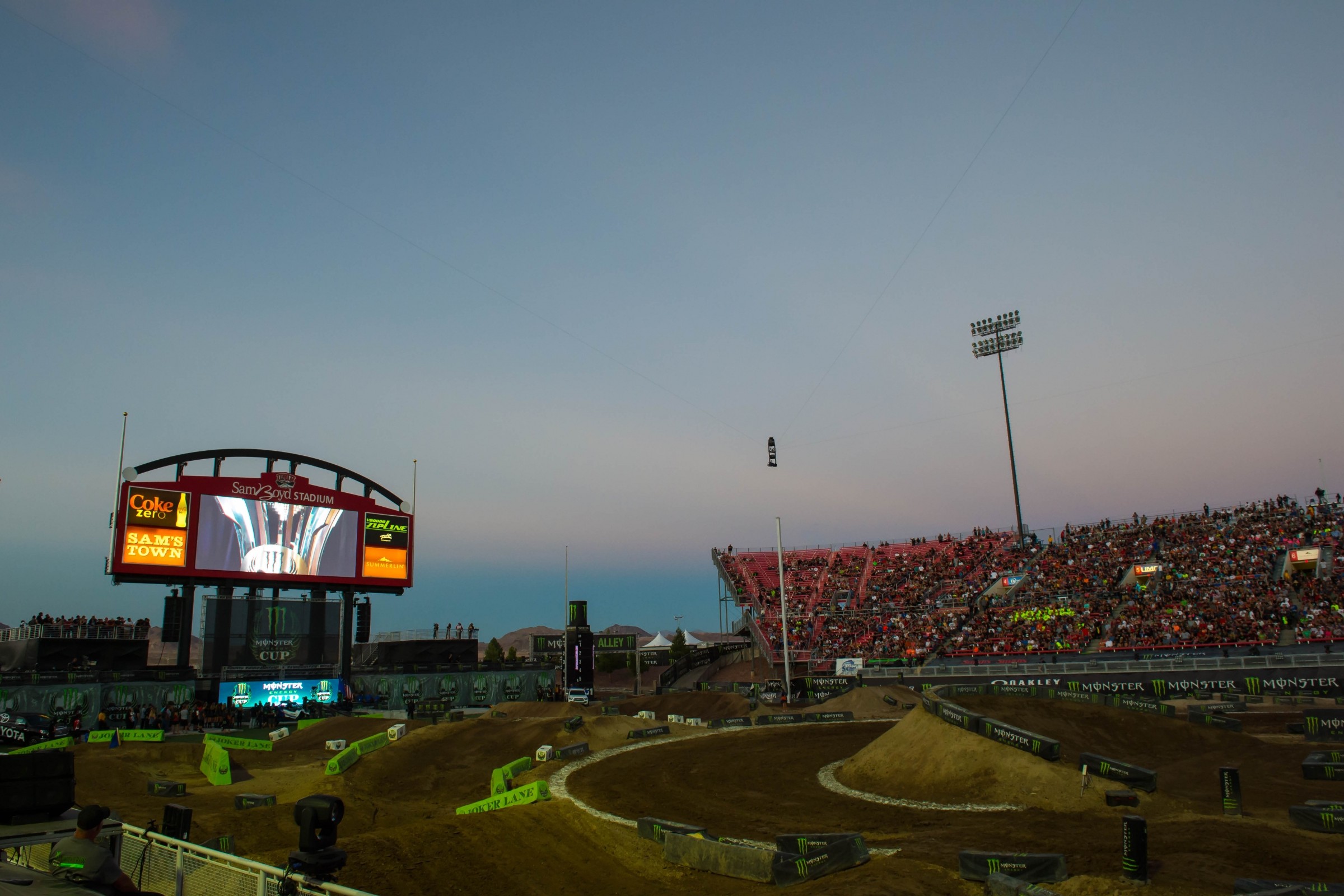 I’ve heard this “season is too long” refrain for several years now, although the season hasn’t really gotten any longer. The AMA Supercross and AMA Motocross schedule features the same number of races as always—and it was actually two races longer for a few years—and off-season races like the Motocross of Nations and the USGP date back to the earliest days.

So that must make the Monster Energy Cup and Red Bull Straight Rhythm the target of any “they keep adding races” rant (it’s worth noting that the Monster Energy Cup draws ancestry back to the U.S. Open, which was actually just a copy of the numerous international off-season races that had been held successfully for 15 years before that. So you can go back 35 years and find that locations have changed, but the general number of races has not).

Not one rider will line up for all four races from the USGP/MXoN/MEC/RBSR tilt. Only Tim Gajser, Dean Wilson, and Justin Starling will race both the MXoN and the MEC. I get it, the season is long. I’m not even going to Monster Energy Cup this weekend because I’ve been home for three of the last 17 weekends. We’ve got plenty of guys who want to go hang in Vegas, so Racer X has it covered.

Yeah, it’s yet another race, but credit to the energy drink companies for trying. Monster puts up what could be a million bucks for someone. Yes, I’m sure the million comes via an insurance policy, and when Ryan Villopoto won it he complained about the tax hit, and then Chad Reed and James Stewart woke from twitter slumbers to take some jabs. They’re competitors, but Villopoto, Stewart, and Reed found common ground when complaining about a lump sum of $500,000 after taxes. That’s $500,000 more than what was available on a weekend off, and also more than any rider ever made in any other race. Ever. In the history of the sport.

That’s where we are, though. Riders and teams stretched so thin that any event, no matter how fun, easy or lucrative, only gets a mixed response. That’s all understandable when dudes are making money on the bread and butter, which are the points paying races. This was a great formula back in the roaring Aughts. Back then, it wasn’t just win on Sunday sell on Monday. It was take out home equity loans on Thursday and buy trailers full of bikes on Friday to go riding on Saturday. Lots of bike sales and lots of money rolling through the industry. Not only did the Carmichael/Stewart/Reed guys make bank, the guys just below that raked it in, too, and even the guys below that. A dozen years ago, people actually complained that too many riders made too much money for not enough results. Wow! Today, even for top-10 level guys are having to scratch and claw. The champions still get paid big. Like the broader economy, the middle has felt the post-2007 pinch.

Enough on economics, though, because I don’t want this to delve into a discussion on politics. My point is that the money doesn’t flow through the industry like it once did. Teams would like to have outside sponsors to supplement that, but that’s not working. Have you seen what happened to RCH?

The energy drinks are the only ones really investing big. The Monster Cup offers a $250,000 purse, $100,000 to the winner and a million bucks if someone wins it all. Red Bull Straight Rhythm offers a $100,000 purse, and $20,000 to win. It also requires very little work (six few minutes of riding, total) and a convenient location in California. Moreover, both events offer exposure. Monster Cup airs via the regular SX channels and gets Fox Network time sandwiched around an NFL Sunday. That’s big. And Straight Rhythm, thanks to Red Bull’s media reach, might actually be the most-watched dirt bike race of the year. The 2015 show sits on YouTube with four million views right now, last year’s is up to about 800,000. The live webcast on RedBull.TV actually draws real outside fans (full disclosure, I’m the announcer for the race. I know it attracts outsiders because I get inundated on Twitter from newbs who tell me they just watch whatever Red Bull throws out there—be it air races, BMX, mountain bikes, moto, or whatever—and don’t see any other dirt bike races all year). Also, Straight Rhythm gets an air date on NBC that draws about half a million viewers. Easily a million people could end up watching each of these events.

Both brands are helping fund big races that pay riders good money and offer a lot of exposure, and riders from each brand are welcome to race each event (Red Bull has not been successful in getting Monster-branded riders to compete at Straight Rhythm, but the invite is always open).

We’ve seen this formula before. X Games hosted an honest-to-God supercross (style) race and everyone said the TV exposure was going to be massive and amazing. The industry was red-hot for X Games at first, but the love faded. In 2010 I actually worked behind the scenes for ESPN, giving them research and info on the riders so they’d be ready for the race. But the response from the athletes was bizarrely lackadaisical. James Stewart decided to pull the plug on racing it a few weeks before the event. ESPN was so confused. The JGR team went 1-2 that year with Josh Grant and Justin Brayton. I asked the team what its title sponsor, Muscle Milk, thought of getting so much exposure. Team manager Jeremy Albrecht told me “they thought it was cool.” It wasn’t a contracted event for the team, just a bonus race they felt like doing. It didn’t impact the sponsorship deal. Teams didn’t really care about X Games. Due to the lack of interest, the race went away.

One argument I hear is that the X Games audience won’t ever buy dirt bikes or gear, anyway. You could make the same argument over those four million YouTube views for 2015 Straight Rhythm. But can you really complain about a lack out outside sponsorship money when you’re not actively trying to get in front of as many eyeballs as possible?

And if you really want to capture the hardcore fans that buy bikes and gear, well, those folks are glued to Motocross of Nations coverage, and we discussed last week that teams and sponsors don’t seem to see much value in that, either. Most of these races have become a curse rather than a blessing, an obligation over an opportunity.

That’s because this sport is built on pride instead of profit. The brands and athletes want to beat each other for titles. That’s what they care about. Even though Monster Cup does draw most top riders, most go there to test for the next seasaon. Racing for points is always on the brain, and that’s awesome because it keeps the train on the tracks. If the factories started looking at racing from a profit and loss perspective, they might not even do this anymore.

That’s great, but when the model gets a little shaky, these other races are here to give the marketing departments some ammo, and the riders a nice chunk of change. Is that moving the needle for anyone?