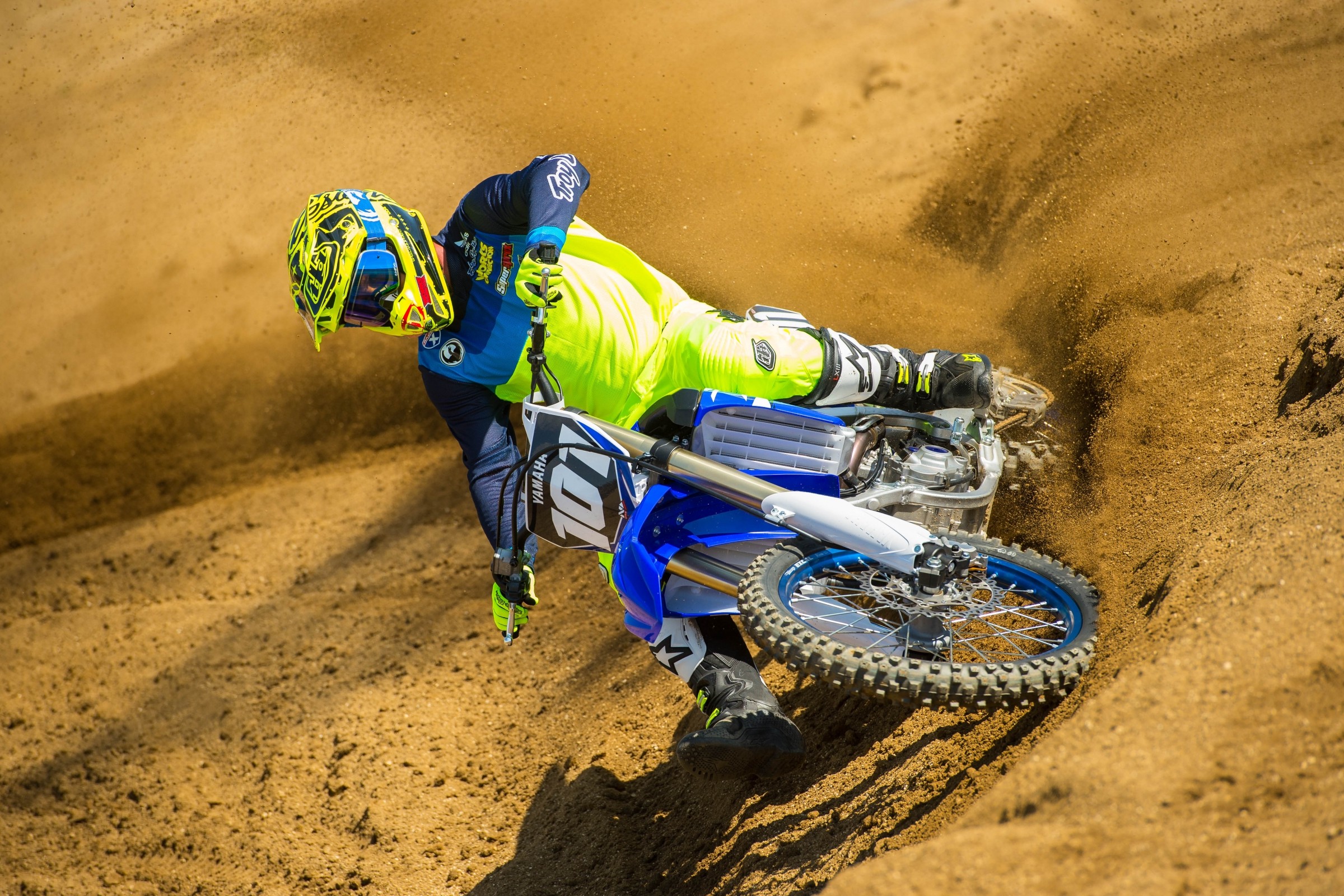 Forgive me if this horse has already been beaten but I want to get your take on the grassroots of the sport, excluding the fact that bike prices have gotten out of hand.  The moto scene here in North Carolina is really hurting and I've decided that if many more tracks fold up I'll probably have to sell my cherry new KTM350 SX-F to get a mountain bike...which are pretty expensive too.  Some pumpkin-heads (get it?) like to pick on those of us who don't care to waste an entire Sunday and $50 to ride 12 laps.  Throw in the fact that no one else signs up in your class and it leaves you with this feeling of, "why did I even do this?"  I wish there was some type of revolution that would reinvigorate local racing.

A couple of years ago after learning my wife and I were expecting I decided that perhaps I should give up motocross.  My bike sat idle that nine months and I gave BMX a try.  Although the adrenaline rush wasn't the same, the competition and the sanctioning body's organization made me realize that we're doing it all wrong in motocross.  Every BMX race pays points toward a higher purpose...think year-end ranking in your district and National Events count toward a National Ranking. The higher skill level classifications pay higher points toward that ranking, and this helps with sandbagging. A true state champion is crowned.  You always are classed with similar skill level riders to make a minimum class.  I know the format wouldn't work the exact same but I definitely feel we could take some of these ideas and apply them to our sport to jolt us into the right direction.

Eventually a baby was born and a dad dusted off his boots to get back on the motocross track.  I love the sport but I find my happy place is waking up and having breakfast with my family, sneaking off to the track for a few hours and coming home for the late afternoon wagon ride round the block.  $30 and 30 laps later I call it a good day.

Can’t believe your community hasn’t been shamed into changing its name to Indigenous Peoples Trail, NC. Political correctness overcorrection aside, I know exactly what you’re talking about here. Local racing for many of us was a way of life in the 1980s and 1990s; there wasn’t a better way to spend the day than at the races. However, kids these days have an attention span of an infant and anybody in their 30s and 40s with a family wants to get home and spend some time with their wife and kids. My wife and girls will come out and watch the occasional race here and there but they have their own things going on and spending all day at the race track just isn’t an option. So, I do exactly what you do … get up early, knock out a couple motos at the local track and then get back home for brunch with my girls.

I don’t know about BMX racing or changing the points/ranking system. I just don’t know if people care about that anymore. I would suggest making the races more fun. Encourage camping at the track, have some team races and try to get the whole family back out to the track again. Somehow the fun got sucked out of local racing and it became too serious/expensive/time consuming for most folks, including me. Hopefully you don’t have to sell that shiny new KTM.

How are professional racers’ contracts paid? Is it by race? One lump-sum payment? Other sports usually have a contract that pays them a game check (their yearly salary/games=per game check).We keep hearing how racers aren't paid for the offseason races (in addition to the scheduling issue). Do you think it is possible to negotiate an incentive in the contracts to make it worth it for the rider's and sponsors? I am sure that the sponsors would be open to paying something for the exposure, just probably not on the level of their normal SX/MX race payments. Possibly a "bonus" if you are selected to the des Nations team? Or an "appearance bonus" for Monster Cup/USGP/Red Bull Straight Rhythm/etc.?

Also, what requirement did Mookie meet to get a career number this year?

I used to negotiate my own contracts because I was too cheap to pay a good agent. As such, I demanded payment, up front, in Bitcoin or non-perishable foodstuffs. No way was I going to be affected by fluctuations in the economy. I also included a non-negotiable rider that ensured I had Riptide Rush Gatorade in the coolers at the races at all times. Nobody is going to take advantage of me. Other racers negotiate their contracts for things like “cash” and “bonus money” and payments are typically broken into equal monthly installments. Bonuses are paid per event and racers are paid quite via the purse money or appearance money for off-season races … with the exception of the Motocross of Nations. That event costs riders money. They could negotiate something into the contracts but it isn’t common. Honestly, the money isn’t the issue with that race, it’s the timing. The riders selected to go make plenty of money and I’m sure they would love to go represent America if it didn’t completely throw off their prep for the following season. The simple answer to the problem is to schedule it closer to the end of our motocross season. Problem solved.

Mookie won a 250 supercross title and they started awarding permanent numbers for those.

I will get to the question first then I will rant. What is the deal with the amount of fans that complain? Is it due to the inventions of myface, twatter, and spacebook that give everyone the ability to voice their opinion (albeit most of the time uninformed)? Or are the fans complaints increasing? Maybe I'm the problem, maybe I'm just too sensitive.

I mean trying to find a positive post on vital is like going to a Brantley Gilbert concert and finding a girl without an STD... It’s ridiculous the amount of things people complain about... "rider x didn't go to des nations", "track is too one lined/ too rutted" my favorite "rider x owes us fans an explanation of his racing/retirement plans" *high pitch prepubescent teenager voice* (pretty sure that isn't an offensive category... yet). Last I checked no rider owes any "fan" anything! The list of complaints goes on and on. Why not just enjoy the racing that's going on with the current group of riders?

Anyway just wanted your opinion on the state of negativity with our fans... Oh and $100 says some jazzbo with an unhealthy obsession with Eli Tomac* complains that the camera angles weren't good enough for MEC because they couldn't quite make out if their crush Tomac wore Hanes or Fruit of the Looms.

*Tomac can be changed to any superstar rider

If you haven’t yet lost all faith in humanity, spend a few minutes scrolling through the comments section on any website that has one. After a page or two you’ll be ready to sign up for Elon Musk’s Mars rocket to inhabit that planet. There are always two groups diametrically opposed to one another in terms of opinions and both full of snarky comments. And then you’ll typically find one guy ranting about something completely unrelated and another lunatic posting nude photos of girls. I would have never thought the comments section on a motocross website would be a microcosm of society in general but here we are.

You’re right, brother, we need to get over the whining and bitching and just enjoy the sport for what it is. We aren’t always going to agree on riders’ decisions or certain aspects of the sport, but that’s what we’ve always referred to as bench racing fodder. But somehow bench racing has turned into an online fight club where you don’t stop the nasty comments until the other guys face looks like Jared Leto’s in the actual movie Fight Club. I don’t think there’s a fix to the political and social divide in this country because of the moral and emotional disconnect from the varying parties. But motocross is supposed to be the one place we can all come together and agree that there is no better sport on the planet. I’m not suggesting we create a drum circle at the next riders meeting and talk about our feelings while drinking tea and holding hands, let’s just try not to be such assholes to one another. See you at the track.