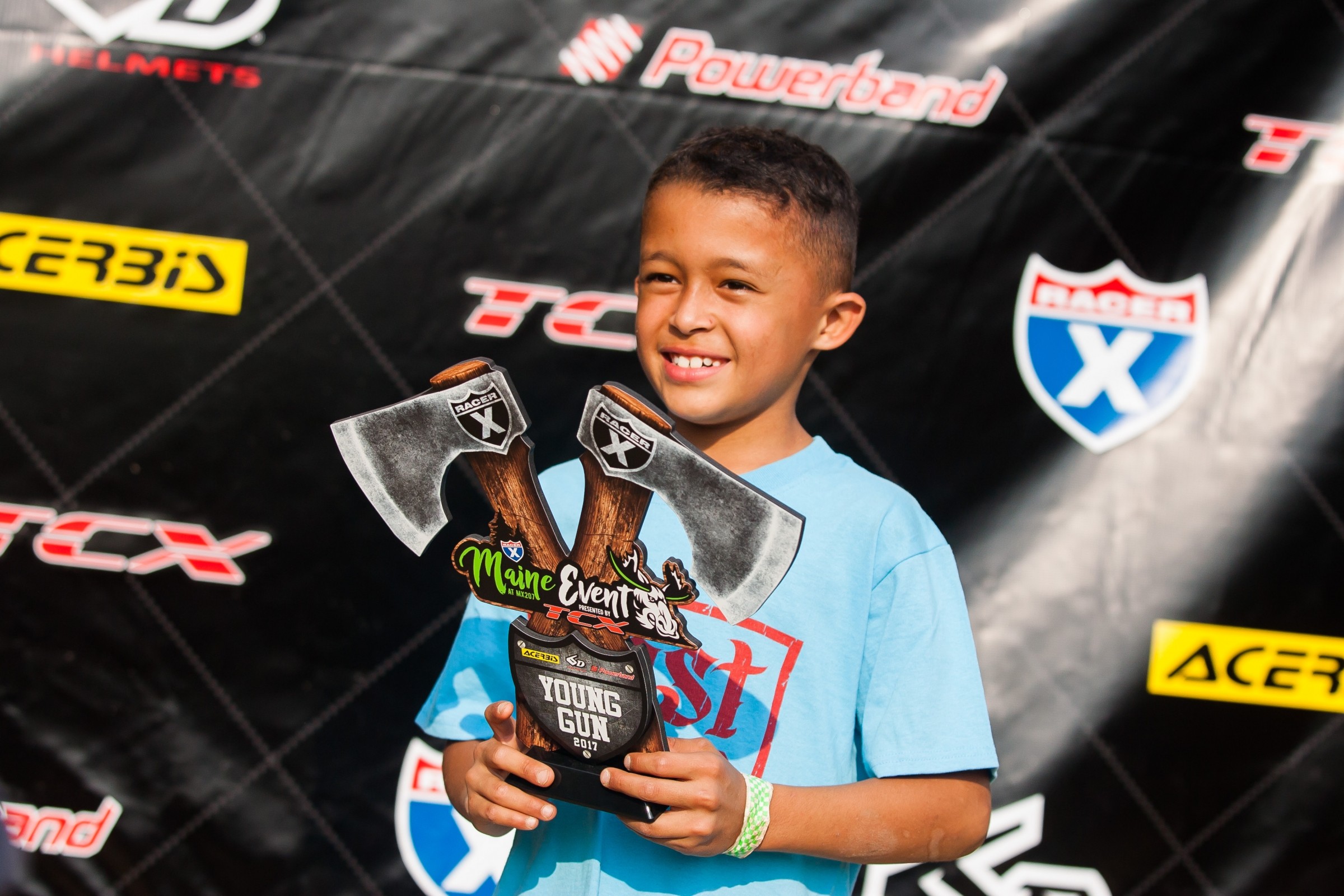 3 on 3 Specials from the Maine Event

We had a lot of fun at the Racer X Maine Event presented by TCX boots over the weekend, and that makes sense, because MX207 (the track) really did the heavy lifting for us. They ran the race, we just watched and took photos and videos.

But while we were watching, we were learning, and we handed out the following special awards, just to give the event an extra unique twist. Here are the winners:

This was a tough one with many dominant riders throughout the weekend—Owen Covell, Luke Neese and Justin Allen, among others, were all very strong. Ultimately the award went to Canyon Richards, who dominated both of his 50cc classes and snagged a moto win on his 65. That’s nine moto wins for the weekend and grabbing one during the transition to a 65—with a real clutch and gears—is never easy. Overall, he went 1-1-3 in his three classes and scored the most total points of anyone. Canyon is the King of the Classic.

Jake was a workhorse all weekend, borrowing two bikes (a 125 and a 450) and jumping on his own 250F to log 12 motos through two days. The A classes ran a lot of laps, and Jake was pretty whipped by the time Sunday evening came around! He acquitted himself well, though, absolutely dominating the 125 class with four spectacular rides, even handling RJ Hampshire without a threat. In 250A and 450A he battled class champs Rammy Alves and Chris Canning for moto wins the whole time. Jake’s a young NESC rider in the mold of the vets up there—he’ll grab any bike and race anywhere, anytime. That’s an Unsung Hero.

Also from the 50cc Classes, De Pinho was the younger guy in his 50cc class but grabbed a bunch of second-place finishes. He was solid—look for him up front next year.

Not getting good starts is not good. However, it worked well for one man, James Harrington, who consistently started just inside the top ten in all of his motos, and ripped to the front every time. If Harrington had you in sight on the last lap, you were in big trouble! For his efforts, we gave Harrington, who won the Open B class, the Comeback Kid Award. On the podium, he said “I need to work on my starts.”

The Seven Deuce Deuce told riders to hashtag their best Instagram shots with #MaineEventLitKit and we saw plenty of entries, including some riders who weren’t in Maine hashtagging their photos to try to get in on the award anyway! (We’re looking at you, Josh Greco, posting #MaineEventLitKit while you were standing in the rock garden at an EnduroCross). Ultimately, Enticknap went with this sweet combo look from Tyler Hayes.

Hayes bounded to the podium joking he should get an award for “slowest rider in the A class” but he was pumped to get the Lit Kit trophy! Hayes also runs shoulder-length curly red hair that would make Shawn White proud. Style for miles here.

“It helps when you run your own graphics company, you can match everything up a lot easier,” said Hayes, who runs a company called Melo graphics. First time Enticknap has ever been associated with anything melo.

Rammy came all the way up from Florida for the Maine Event, taking in Sunday amateur day at the MXGP of USA in Jacksonville, then another race in Georgia before heading up. He was able to avoid Hurricane Irma by doing so, but that’s still a lot of road time. We gave him the High Mileage Award so he would have something to look at on the dash board.