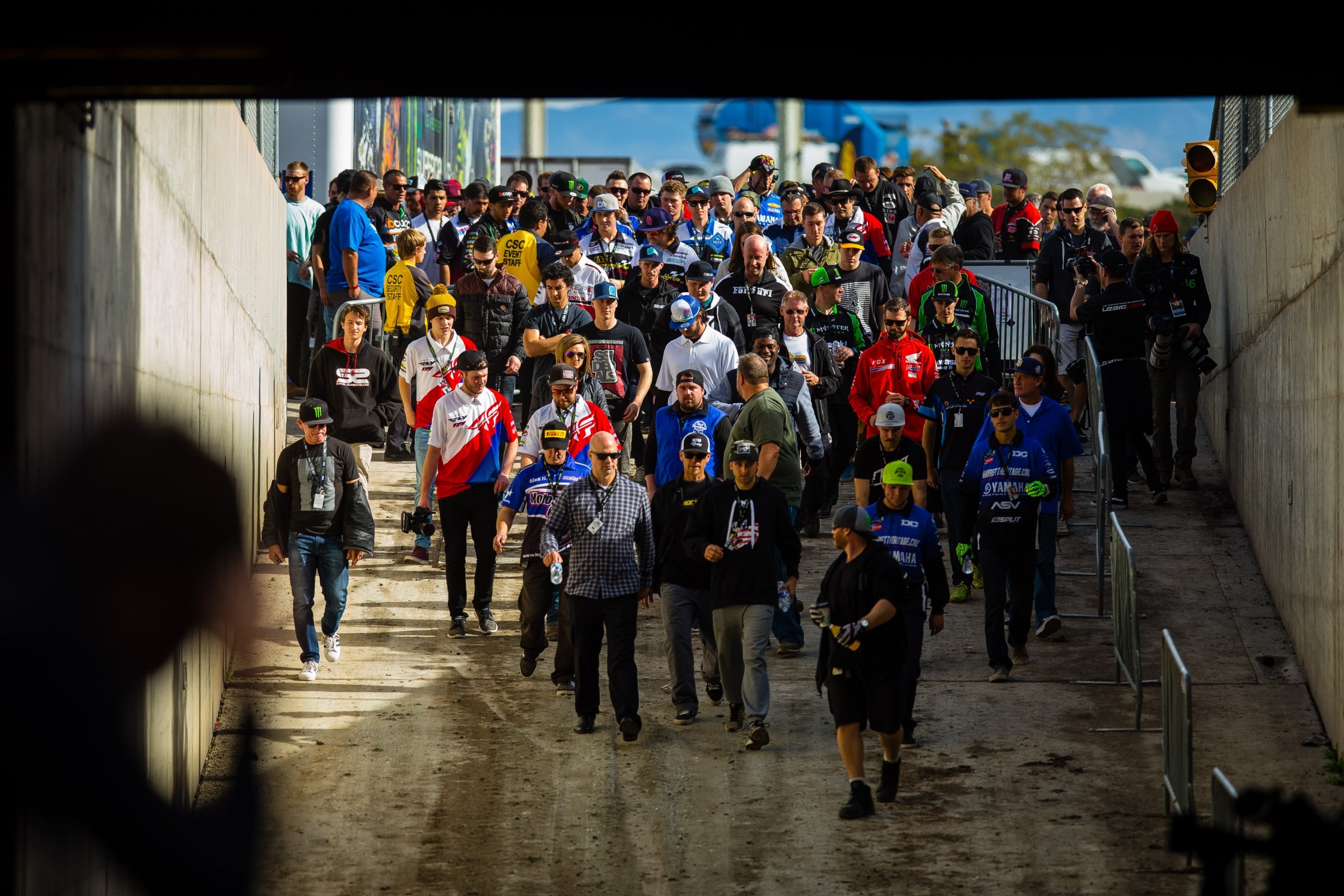 “I’m in town, let’s go to lunch,” said my old friend Denny Hartwig, formerly the PR manager for Monster Energy Supercross. Denny took a job at Chicagoland Speedway last year, and now I’m noticing some changes at supercross. For example, supercross press day, held on Thursday since the dawn of the sport, has moved to Friday. Unfortunately, I didn’t know that change was coming when I booked my plane tickets.

“Thanks for leaving supercross,” I said to Denny. “They changed the press day schedule so I have a flight at 6 a.m. Thursday for no reason.”

“You want to fly there at 3 p.m.?” interjected Coy Gibbs, who was along for the lunch with Hartwig, as well as JGR team manager Jeremy Albrecht.

Turns out Coy and his dad, coach Joe Gibbs, had some California business to attend to, and they were taking the NASCAR team’s private plane. I said yes to that flight, and then Denny’s boss picked up the lunch tab. Free private flight, free meal. This trip was turning epic.

Coy told me I would have to show up a whopping 15 minutes before the flight. But only because his dad requires it. Like, somehow when you’re flying private, 15 minutes is so early only an NFL coach would require such discipline. I did have some other questions, though, such as, where and when were we landing? The small airports for these planes don’t have rental car facilities. Luckily, I’m the most flexible traveler ever. I hopped on, already amazed this was happening, and just when I felt the plane flying high, high up above the clouds, it seemed the sun was shining with extra intensity through the windows. Then I realized the light was not actually from the sun—it was shining directly on the plate of free food one of the pilots was offering me.

When it comes to finding free meals, I’m a regular Liam Neeson in Taken. My skills make me a nightmare to someone like Coy Gibbs. Ironically, they were serving Jimmy John’s. So, Jimmy John’s is still supporting the sport in some way!

We landed in Van Nuys, California, at about 5 p.m. We saw Jay Leno walk right past our window, heading toward a plane of his own. Meanwhile, I didn’t have a rental car and didn’t know if I would be left right there on the tarmac with my bags. Jay has plenty of cars, perhaps I could rent one?

I texted one of my friends who lives in Los Angeles and told him to come get me. Moments later, Coy grabbed a big black SUV that was parked on the tarmac, and told me to get in. “We’re going to Nathan’s,” he said.

I texted my buddy who was on his way, telling him, “Change course! Now we’re leaving the airport. We’re going to some place named Nathan’s.”

A Google search revealed approximately 1,794 Nathan’s Famous Hot Dogs in the surrounding area. But Coy is a Wienerschnitzel guy. How could this be?

Turns out we were actually going to the house of a guy named Nathan. Coy gave me the address and said my buddy could come over, too.

I truly believe Coy Gibbs does all of this work just so he can surround himself with people to make fun of. He loves, loves, loves talking crap with the boys. So while he wouldn’t want anyone to know this, deep down he’s a great guy and will do anything for someone in his group.

We all went to dinner at a steak house, and I felt chest pains before even eating the red meat and mashed potatoes. Those prices! My buddy and I were freaking out, and considered settling for the house salad, but then Coy started ordering stuff for the whole table, a beer he didn’t like was shoved in front of me, and then he handled the bill. There was zero reason for any of this to happen.

But I was still stranded. I had a hotel way down in Lake Forest, California, near Simon Cudby’s house. By sticking with Coy, I at least got a ride to Anaheim, so from there I grabbed an Uber to my hotel and settled in. Friday was scheduled to be the greatest day ever. Cudby and I were going to go down to KTM HQ and test some new bikes!

Then it rained. Bye, bye bike test. Also, I still didn’t have a car.

While enjoying free breakfast at my hotel, (free meal #4!) I then realized Feld Motor Sports had some activities planned at Angel Stadium. I was stranded, but luckily our advertising man Pete Martini was heading to the stadium, so he picked me up. At this point, I took it as a personal challenge to avoid getting a rental car for as long as possible.

At the stadium, Feld held a really cool Digital Summit for the teams and OEMs, explaining some of the company’s new ideas to grow the sport. We’ll have more on that event later—but, in the back of the room, they had free lunch! (Free meal #5!)

Then the new Friday media day began. We grabbed Aaron Plessinger, Shane McElrath, Tyler Bowers, and the Enticknap brothers, and I shot some videos with our California editor, Kyle Scott. At one point I lost our microphone, only to realize I dropped it within the plates of free cookies. Shocker.

When the videos were done, I grabbed some more sandwiches, wrapped ‘em in some napkins (free meal #6!) and hopped in Kyle’s van. We headed for Kyle’s frat house place in Newport Beach. We parked, and I nearly hit a jogger in the face with the van door. The jogger was wearing a Suzuki jacket. Wait, WAIT!

(All of his runs are in the rain, by the way. The cloud follows him.)

Phil somehow rents a house that is literally around the corner from Kyle. Since Kyle had to edit the press day video and I wasn’t going to help, I went over to Phil’s to hang out. Now, I was putting my master plan into action.

See, Matthes had been promising to buy Phil dinner all week. Matthes busts on Phil so badly that he feels he owes him something. (He actually posted a poll on Pulpmx to prove it, asking if all of the extra press attention has actually helped Phil, or Matthes. Matthes won the poll, so now he owed Phil dinner. Heheh. I was going to be waiting in the weeds when the check came.)

At the house, Phil, his girlfriend (yes, she and Phil argued on nearly every point in life), and his trainer Coach Seiji were there. We ended up solving all of the world’s training and fitness problems in about 30 minutes. Then we jumped in Phil’s truck and headed to a Suzuki autograph signing at Bert’s Mega Mall in Covina, California. This place boasted the largest collection of UTVs I’ve ever seen, along with the largest price tags. One Can-Am side-by-side sported a price tag of … $32,000! Okay, people aren’t buying dirt bikes like they used to, but they’re still buying something. We’re saying $9,000 dirt bikes are outrageous?

Then we went out and met Matthes for dinner. We started ordering the hell out of the menu. For some dumb reason Matthes fell for my plan, he picked up the tab for the entire table even though he didn’t owe Seiji and I a damned thing. Whatever….

I headed back to Kyle’s place for some beers and stories started flowing. I don’t even know, it’s just what happens when you’re LurkinNewps. The town kind of reminds me of Vegas in how it’s engineered to make you stay up late. No worries, we had a rain delay schedule at Anaheim.

You probably know all about race day. It included a Wienerschnitzel lunch (free meal #9) and Buca di Beppo at GEICO Honda (free meal #10). Otherwise, you already read about it.

On Sunday, I called Cudby and he said he was going to a Shimano bike event for moto guys. Blah, blah, blah, all I knew was they would probably serve food. They did! (Free meal #11.) Also, there was quite the crew of moto stars on hand: Trey Canard, Cole Seely, Justin Brayton, Wil Hahn, Dean Wilson, Davi Millsaps, Jeff Ward, Ryan Hughes, Jimmy Button, and more. GREAT bench racing all around, especially after such a crazy night. Seely told us he was already getting texts asking: “So who is getting the Roczen replacement ride?” This was about 12 hours after the crash. Can we establish some #toosoon guidelines for this process?

By the time the bench racing was over, it was 2 p.m. and I would finally have to get a rental car. But, I wouldn’t have to pay for it. On Monday, I was going to announce the Geneva SX at the Lucas Oil/MAVTV studio. Then as soon as that ended, I was going to hammer it to Vegas to do Matthes’ Pulpmx Show. Hey, I needed a rental car to get to Matthes’ house, right? Surely he’d pay for the car! Kyle dropped me off at Orange County/John Wayne Airport, I grabbed a rental car and a hotel room (might bill that one to MAVTV, we’ll see) and buckled down to get Monday’s work done on Sunday.

I did have to eat at the hotel restaurant. I ran into a fan named Mike, who had flown all the way out from New England to watch a local fast kid race the KTM Jr SX Challenge. And the kid won it! Mike was pumped and I was thinking if I kept feeding him inside info he would eventually pay for my meal. But dammit, Matthes and Ping were calling and it was time for our Fly Racing Racer X Podcast show.

Monday morning (after hotel breakfast, free meal #12) I headed to the MAVTV shop and Grant Langston and I voiced the Geneva race. It airs on MAVTV and the racing is really good—you get Musquin and Brayton dueling for the win, and an epic Mookie/Barcia slam fest.  Worth watching!

We finished the show at 2:08 p.m. (also enjoying another free Jimmy John’s lunch, #13!) and I punched Steve’s address into my phone. My estimated arrival time? 6 p.m. exactly.

Between rain in California and the budding afternoon traffic, I started slow, but I floored it on the 15 through the desert. I rolled up to Steve’s house at 5:58, leaving me just enough time to run upstairs and get the headset on for the 6 p.m. show. Then, at the first commercial break, I ate some pizza Steve and Pookie had ordered (free meal #14!).

The moment the show ended at 10:15, I was out the door for an 11:50 p.m. red-eye home. I was in a hurry. Tuesday kicked off NASCAR media week back home in Charlotte, NC, and I had a credential waiting for me. I had to get there. Why? Because they serve free lunch. #15, baby.