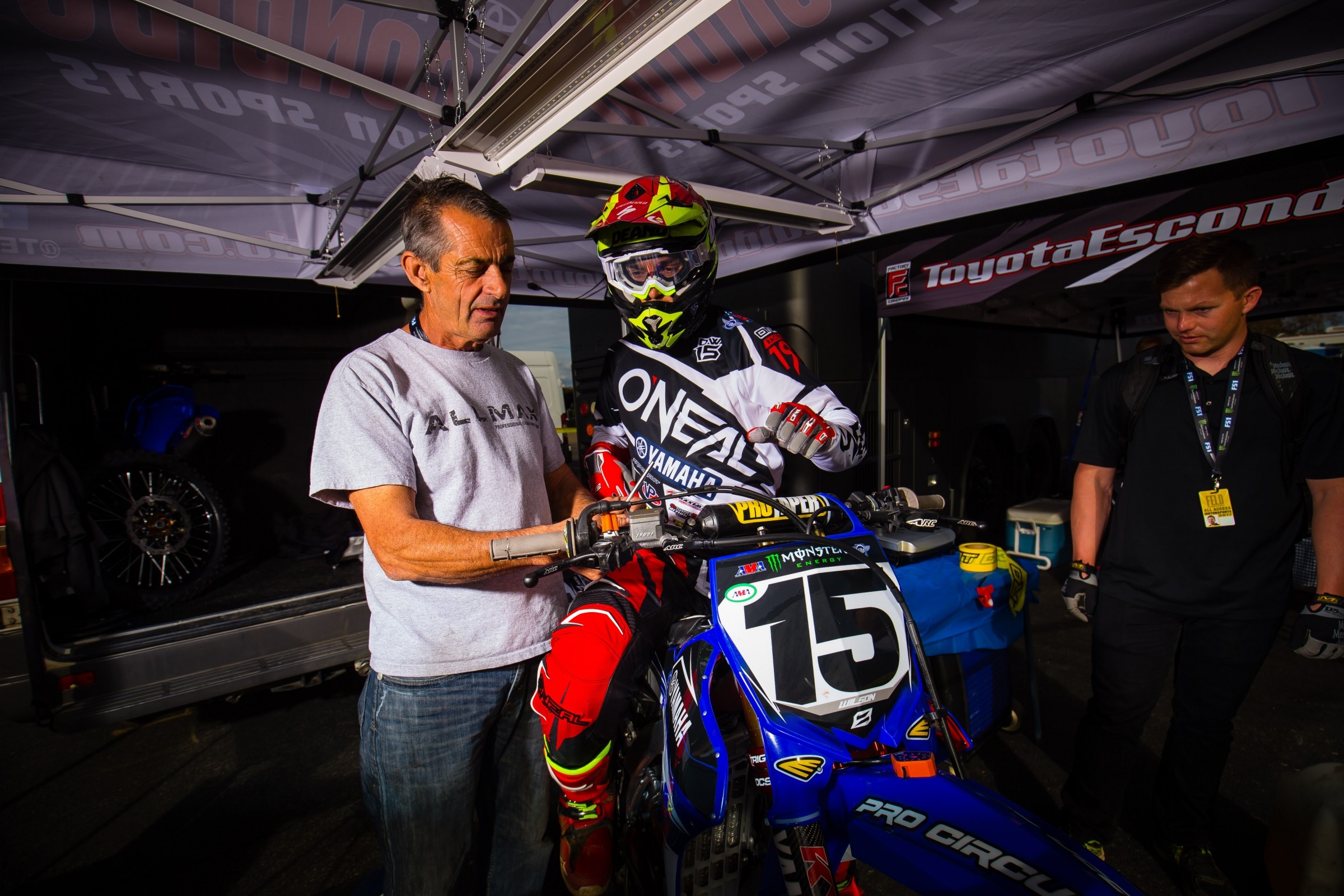 By now you’ve surely seen the footage of the altercation that took place in the tunnel between Jason Anderson and Vince Freise at A2. We could debate whether or not Friese’s pass was okay, or if Anderson’s reaction truly warranted a disqualification, but none of that really matters right now. The bottom line is Anderson missed out on a boatload of points last Saturday. He now sits ninth place in the championship standings and faces a 33-point deficit to Ryan Dungey. Let’s see how he bounces back in Phoenix. –Aaron Hansel­

After starting the season off with a pair of lackluster finishes, Cooper Webb looked much more like the rider we expected to see at A2, finishing fourth. Webb credited a better mindset for his improvement, stating he “just kind of relaxed and worried about myself,” during the week leading up to A2. He also said he tightened up in the main after a few laps and didn’t ride like himself. If he doesn’t tense up in Glendale it wouldn’t be a shocker to see him get on the box. –Hansel

It might not be time to panic just yet, but the alarm bells have got to be making a bit of noise over at Monster Energy Kawasaki. For the third race in a row Eli Tomac wasn’t able to finish strong and gave up ground late in the race. We’re not used to seeing this from Tomac, and he’s probably just as puzzled as we are. Whatever the issue is, he needs to fix it quickly if he wants to keep his title hopes alive. –Hansel

It’s still early in the season but it’s starting to look like the 250SX West Region title fight could come down to a brawl between Shane McElrath, Aaron Plessinger, and Justin Hill. Except for Martin Davalos’ third place at the opener, McElrath, Plessinger, and Hill have taken every single podium spot so far, and McElrath and Hill are responsible for all three wins. The result is a tight points situation—McElrath holds a slim six-point lead over Plessinger, who has just one point on Hill. We’ll see if that gets any tighter in Glendale. –Hansel

Talking about Jeremy Martin, who’s gone 6-7-10 in the first three races of the season. It’s not that he’s been riding badly, it’s that his starts have been inferior. He got a terrible start at round one, got stuck in the gate and crashed on the first lap of round two, and found himself on the ground in turn one at A2. Martin, who has been the fastest qualifier in two of three races this year, has the speed to run up front, but he’s not going to do it if he keeps coming out of the gate like this. -Hansel

Knee injuries have limited Dean Wilson to just five supercross races in the previous two years. The former 250 MX champion is using 2017 as a rebuilding year, after losing factory support for the first time in his career. His program has reverted back to a family effort, with his dad, Andy, helping. Through three rounds, Wilson has gone 13-12-11, but as he told the Pulpmx Show on Monday, it’s just about being at the races this year. “Obviously, I feel I’m better than what I’m showing, but at the same time, for me, being at the races is all I care about. I’ll take whatever place I get.” Wilson is still not 100 percent on how many races he’ll do this year under his own effort, so this weekend could be a big race for him. –Chase Stallo

Although Blake Baggett has switched from Suzuki to KTM, don’t expect to see any third gear starts, the technique perfected by Andrew Short during his time on the 450SX-F. “I definitely have tried the third gear [starts],” Baggett told the Pulpmx Show this week. “To simplify it: it’s difficult. It’s not just put the bike in third gear and hold it wide open. It’s definitely hard to master and Shorty definitely had an art to it.” This pre-season, there was plenty of buzz around Baggett’s speed at the test track, but crashes at the first two rounds deflated his start to the season. He bounced back with a 10th at A2. We’ll see if that performance helps start (in second gear, of course) a run for Baggett. –Stallo

This off-season, Weston Peick was one of many riders—along with Dean Wilson, Justin Bogle, Broc Tickle, Malcolm Stewart—who were unsure of their contract status for 2017. AutoTrader.com/Monster Energy/JGR Suzuki brought him back for another year, and the decision is paying off early this season. Peick, who rode a Suzuki for three years (2012-14), seems to be clicking now that he’s back on yellow, and is pushing for a return to the podium. “We keep making progress every weekend. This week’s starts were better. I started a little closer up front which definitely helps,” he told us after a fifth place finish at A2. Peick hasn’t been on the podium since a breakout 2015 season, in which he made two podiums in supercross, but there’s no reason to think one couldn’t be in his future this year. –Stallo

Dungey vs. The Field

We mentioned this last week, but it’s relevant to bring back up again. Dating back to Santa Clara last year (Round 12) Ryan Dungey and Ken Roczen are the only two riders to win a Monster Energy Supercross 450SX round. Further, since the start of the 2016 season, only three times has a round of supercross not been won by either Dungey or Roczen. (Anderson got two wins, Tomac got one during the span.) With Roczen sidelined due to injury, who will challenge Dungey for race wins? –Stallo

If Austin Forkner didn’t enter the season with exceedingly high expectations—from everyone to the media to the fans to himself—we’d look at his first three rounds—8-5-4 finishes—as a resounding success. Alas, he did enter with high expectations, but he told us after A2, he puts enough pressure on himself, and they didn’t really affect him. “I mean, it didn’t really affect me, but I heard it [the talk about being a title favorite]. Obviously I want to win the title and want to do what everyone expects of me. But I put so much pressure on myself, that doesn’t even matter.” Forkner has been good, and will eventually be even better. For now, we can all relax—he’s doing fine. -Stallo