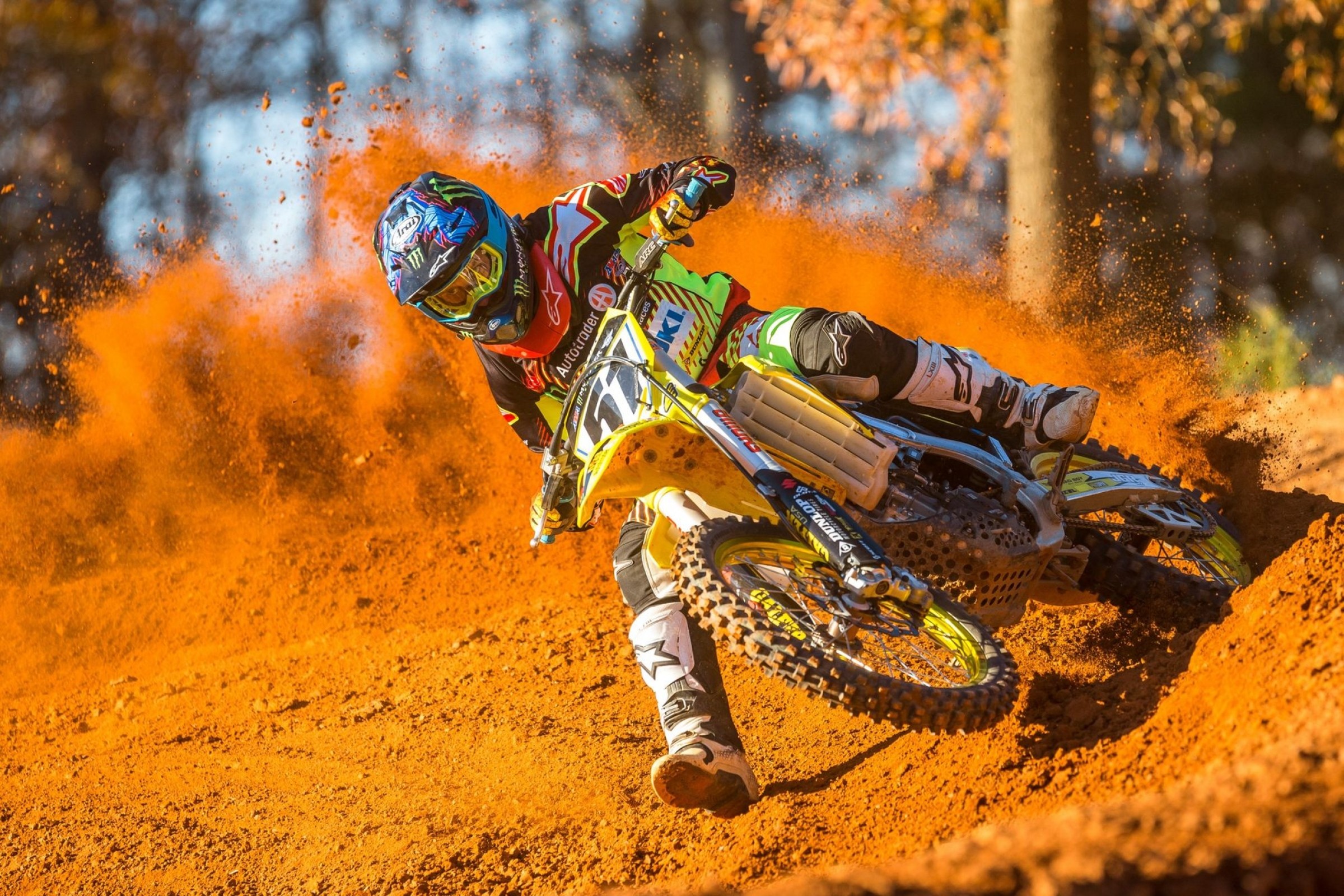 Justin Barcia is pissed. He’s pissed that he’s going to miss the Monster Energy Supercross season opener with a wrist injury, he’s also pissed that people are talking crap on him for being hurt early in the season again (he hurt his thumb right before Anaheim last year). Actually, he’s pissed about people talking crap on him in general, and believes he’ll soon be back up front and proving the haters wrong. He really loves his new Suzuki, too. We saw him over in the Autotrader.com/Monster JGR pit and asked him some questions. Barcia was animated with his response!

Racer X: Okay, last year you had a few good laps in the main event, you were leading, and then the injury kicked in. This year is somehow actually even worse than that. You aren’t even going to be able to make it to the starting line.
Justin Barcia: Well last year I was being stubborn and I wanted to race, and I shouldn’t have raced. I should have just gone and gotten my thumb fixed before the series.

Yeah first place to 11th. That was not good.
Yeah, it made me look super bad and made it look like I wasn’t fit, which was not the case. This year, it’s been quite a few weeks now, just had a freak accident at my practice track. Ended up breaking a bone in my wrist and pulling some ligaments a little bit. No surgery or anything like that, but it’s not realistic to go out there and race. It’s not life changing or world-ending, people will try to say bad things and stuff like that, but for me, life goes on and I’ll be back as soon as I can. To me, there are still a lot of good things. I’ve got a lot of confidence in my bike now and I still have a lot of confidence in me, too. I’m not freaking out or anything. But it has been a tough month for me physically and mentally, but I know how to overcome things, I’ve overcome things before that are worse than this. This is just a little speedbump that I can get over for sure.

Yeah but, man, when you got up from the crash and your wrist hurt, and the opener is coming up, you had to be like “Oh, no.”
Yeah, and this left wrist has been a challenge for me for a long time….

Is this the one you hurt in the second moto at the Charlotte GP?
Yeah. So I’ve had some issues. Not issues that can’t be fixed or anything, it just needs some time to heal. That’s the best thing for me. It might not be the best thing for everyone, but for me it’s the best thing to come to the races when I’m 100 percent and I have that confidence, because I know what I can do on a dirt bike. If I’m not 100 percent then I don’t have that confidence, and when you’re racing the best riders in the world it’s just not realistic.

So explain what you explained to me earlier: you’ve spent the last month just trying to figure this wrist out.
It’s unbelievable. It’s unbelievable how much I’ve tried. As much work as I put into my own training I’ve put into my wrist. My doctor down in Florida, Dr. Berg, he’s done everything he can do. The team has done everything they can do. It’s not possible to get this thing to heal in two weeks.

And it will get worse if you ride?
I don’t know if it will get worse, but it won’t heal. The pain is just not realistic to try to hold on for 20 laps. I just need to let it heal and come back when I’m 100 percent. If I don’t let it heal, it will be something I have to deal with all year.

If you try to race, it will suck all year?
Yeah it’s just not realistic. It will be something I will have to deal with, mentally and physically, all year.

And this layoff shouldn’t be as long as the thumb or the hip and the injuries you had the last two years?
I’m super confident I can get this thing going in a few weeks, and I’ll be back out there. My friend Jeff from All Sport Dynamics made me a brace so I don’t have to wear a cast, so I can take it off when I’m taking a shower. It doesn’t move so I can still do my training. All in all, I’ll still go to the races, I’ll be out here in California supporting the sponsors who have been with me the last few years. They’ve been with me through some tough times, we’ve had some good times, too, but we’ve had tougher times. We’ll be fine.

Let me guess. You were ripping right before you got hurt?
[Laughs] It was going really well! I mean, I was turning some hot laps, I was feeling great. I came back from Europe, I knew I had to work on those things, we worked on those things and got the speed up.

So you got better after Europe.
Yeah! People are like, “If Europe shows anything his season is going to be like that!” You and your buddies.

Yes, our preview videos. That’s what we said.
I don’t care. I’m in that position where people can talk about me in not good ways. Does it bother me? Yeah, of course, I’m a human being, I’m allowed to get bothered. Listen, at the same time, I know I still haven’t been able to show what I can do, like I did in my 250 days. So people can say, “Aw, this is it! This is it! Same thing again!” Okay, whatever. Hey, you guys say whatever you want. I know what I’ve got inside me and I know what I can do on a dirt bike that I’m comfortable on, and it’s unfortunate that this situation came about. But I’ll be back. Boom! One of these days I’ll show you I’ve still got that Bam-Bam in me.