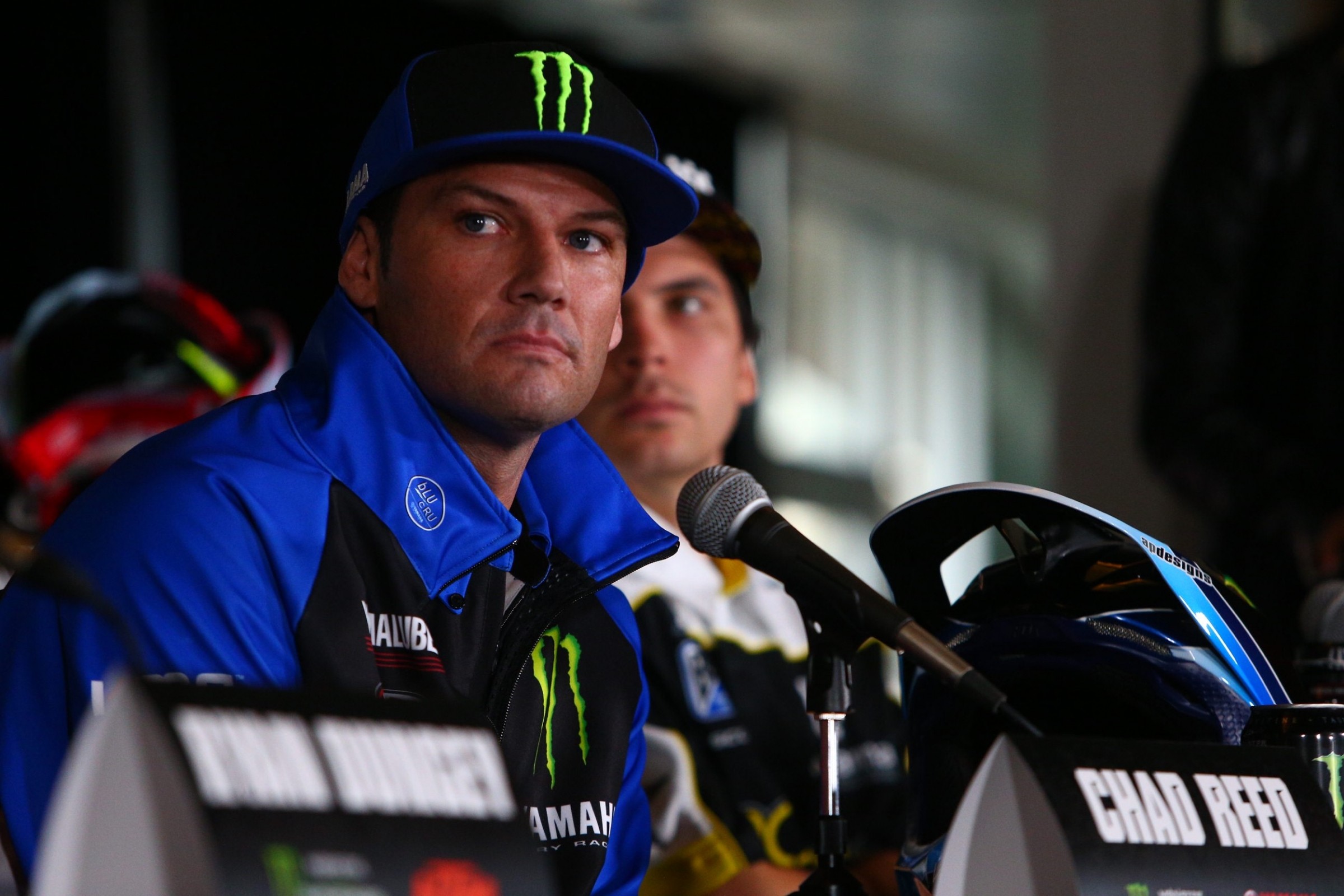 Another Anaheim, another pre-season press conference for Chad Reed. He’s been racing in this event since 2002, and incredibly Saturday night will be, by our math, his 40th Anaheim supercross.

But while the pre-season hype can seem pretty similar year after year, Reed believes there are real reasons why this year will be better than the last few, for him. And by the way, we didn’t even ask him about age or having a teammate in Cooper Webb. Those topics have been beaten to death. As you’ll see, there are many other big things on Chad’s mind, and as usual, he didn’t hold back in talking about them.

Racer X: How far ahead are you compared to last year?
Chad Reed: Hopefully five positions

Last year, this team thing came in late. Now you’ve been set for a while.
The reality is, I burned the candle at both ends for so many years, and everyone thought, “Oh, you no longer have your own team, you’re going to Yamaha and it will get easier,” but really, the last off-season was as bad, if not worse, than the previous six. I was on the phone every day, I was looking at emails every day, I was on the phone yelling at my agent every day. I was pissed off at the industry, every day. I didn’t know where we were at and we didn’t have a job, every day. So it really wasn’t any different [than running his own team, TwoTwo Motorsports]. I did the work and the motos, so I was ready from that perspective, and I think when I came into the races everything was new and fresh and I was able to ride off of that. But reality set in three or four races in. And I just didn’t have it. I was spent, I was worked, and I needed time off. I went to some GPs. It sucked because, I’ve heard comments, people say, “Well, it’s your job to go to Europe and race in that race [Reed’s planned races in the GPs last year]” but it’s like, I didn’t want to race at that race. I would rather go to that race and be a fan, be 100 percent committed to the fan, but instead I’m showing up and giving a half-assed racing effort instead of being there for the fans. I just needed time off. I think one of the reasons I’ve been able to do this for my 17th go around is because I get away from it. I think a lot of people never get away from it. For me, I need to have that step away, that get away, that live a normal life, get fat, until you finally hit that rock bottom, when I weigh 190 pounds, and it’s finally time. It’s time! Then you work hard and you’re excited to work hard. That’s where I excel and that’s my happy place.

This time, I knew this job was secure around April or May. So some of those races I had to do over the summer, that was all the plan, so I went to those and then I took some time off. I feel motivated again. I don’t know exactly what it is, but something feels right, something feels special about ’17 within me. I think everything at home, with the kids, with Ellie, it’s clicking.

So this vision you had when you shut down your team, that you would no longer have to be stressed being both a team owner and a rider, that vision only really came true this year?
Yeah, it wasn’t that. And there’s an adaption period. Think about it. For seven years, everything within the team I controlled. So how it got done, how it was run, if we needed R&D products made, be it triple clamps or a linkage, you found good people who could make it happen. The factories, they’re so limited. They either rely on Japan, or they rely on one individual here. And it’s always six weeks out, or eight weeks out. The best way I can say it is, it took me a long time to have to accept that. You’re trying to test the bike, you’re riding it and having these issues, you’re trying to give your input, but I’m used to giving my input and getting it done. For good or bad, you got it done. But last year, I didn’t get it done. I was getting, “No, we have to wait. That’s not how we do it. There’s a protocol on this.” And I had to relearn that system, and I don’t believe in that system to this day, but you have to respect it because it is what it is, and I’m no longer in this position to change it. There’s only so many things that I can control, other than that, the one thing I can do is try to be in the best shape that I am and try to show up in a good, stable mental position. I think I accepted that this year, and that puts me in an overall better feeling coming into the race weekend.

Last year, you said your bike worked better on the West Coast tracks. You generally prefer the East Coast tracks.
I feel like one of my strengths is ruts. We really, really struggled with the bike in the ruts last year. I feel like we’ve made improvements. I don’t know if we’ve completely fixed it, but we made improvements. So time will tell on how much better it is in those areas. For sure last year, our strengths were on hard pack. Normally I don’t really love hard pack, and those were our strengths. So yeah, it’s hard when your weakness is a bike’s strength and your strength is a bike’s weakness. You want to find a happy medium.

And you can’t get things changed as quickly as you’re used to.
Yeah, you can’t turn it around that quickly. It was something that took the off-season to fix.

You have it fixed now?
I really think we did. But it’s funny, to the outside world, if I told you the three things we changed, you would be like, “Come on, that can’t make that much of a difference.” But in the world we live in, it’s a big change and made a big improvement. So I’m excited about that.

Let’s talk about the new 20 minutes plus one lap format. First off, after 20 laps, are you gassed? Are you tired? Does this matter?
I think that, as we sit right here at Anaheim, the laps here are always around the 58 seconds to 1:02 range, so it’s not going to change anything at this race. But I think that, as we get to the football stadiums, the rectangles, those 45 to 46 second tracks, you’re going to see five or six laps more. Selfishly, I love it. It made starts so key. I also think it was a snowball effect. We wanted longer races, and we wanted longer lap times, so therefore we built wall jumps, sand sections, to try to slow the lap times down, and it led to tracks that were one-lined and really difficult to race on. I’m hopeful that we can back up, go a little more old-school, and build tracks that allow us to race, because you no longer have to worry about slowing us down.

You’ve heard this is something that will change with the tracks, or you’re just hoping?
No, just hoping. That’s my idea. I’m giving you my negative and positive thoughts. So I think that’s the positive side. On the negative side, I feel like I rarely look up after a 450 main event and see a full stadium. I think adding four or five more minutes to the races, I don’t know if that’s healthy for the sport. When you look at the big picture, there was talk of us going to a chase format, that got axed, and then we go to a longer race, so basically of all the things we were talking about trying to achieve, we ended up going in the exact opposite direction. So I come back to, and this is a point where I really stand sturdy, our sport is run by the teams and avid fans on Vital MX.

Couldn’t agree more.
I just think we don’t grow as a sport until we make bigger upset changes that may not make everybody happy, may not make me happy, but from a business standpoint, you need to make business decisions, and those people, they’re hardcore fans and no matter how much they bitch, no matter how much they complain, they’re still going to come to the races, they’re still going to buy their Yamaha motorcycle and their Fox gear, anyway. They’re not the people, sadly, at the end of the day, that we’re trying to reach out to. We’re trying to reach new fans.

You almost need to somehow survey people who aren’t really into it, and ask them what they would like.
Exactly. Making the races longer, it’s going to be tough sell.

When do the races ever come down to the last lap?
Almost never. I think in my 17 years I passed someone for the lead on the last lap one time.

San Diego ’05?
Right. They just rarely ever come down to the wire.

Does the fitness thing matter? Are you gassed at the end?
You are, but, it doesn’t make a huge difference, a little extra time. I like the 20 minutes for myself, selfishly, because it makes people think. It’s going to be a longer race, at some of the races, but more than anything it’s a head f*%k in some ways, because it’s 20 minutes not 20 laps. That’s the hardest part for people to get past. Before you could gauge and set yourself up. I don’t think the all-out, 20-minute sprint is going to happen. It’s going to change things a little bit, I think. I’ll be surprised if it’s an all-out sprint for 20 minutes. In Anaheim, yes, because the laps are always longer here and the races are usually 20 minutes. But for some of the races it’s going to affect the races somewhat, in a good way for someone in my position.