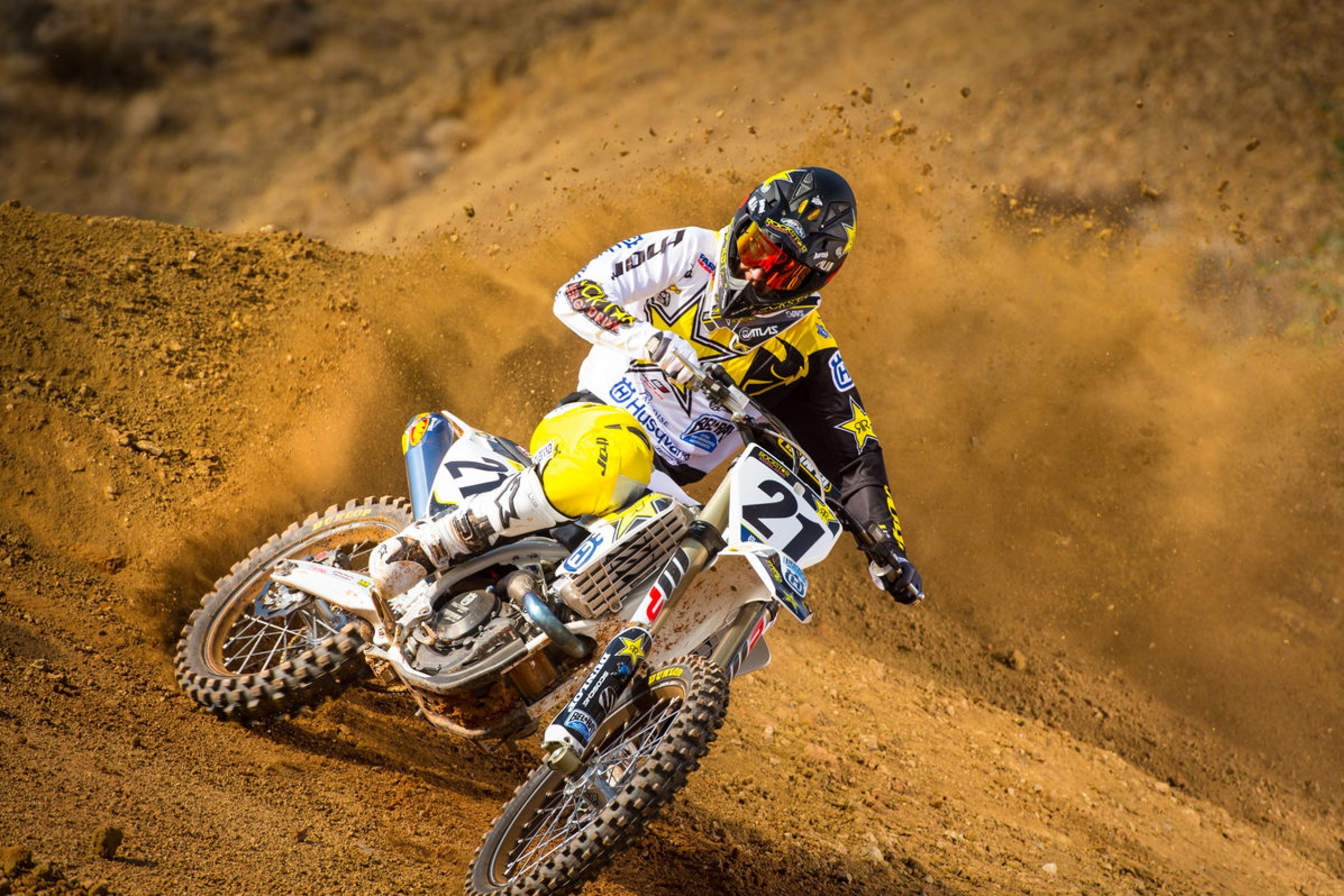 Rockstar Energy Husqvarna’s Jason Anderson won Anaheim 1 last year. There. So while there’s all this buzz and talk about so many other riders, Anderson, who hasn’t been heard from much in a while, is the one who can say he knows how to get it done at the opener.

And he’s ready. Despite a dramatic moment at the Motocross of Nations last year, Anderson’s off-season was actually pretty smooth, and he told us at the pre-season press conference on Thursday he wants to run up front even more in 2017.

Racer X: We haven’t talked to you in a while. First, I think people are thinking you are coming off of a big break due to the des Nations crash, but I don’t think you were actually out that long, right?
Jason Anderson: Yeah, I was only off for three weeks. So it wasn’t too much, I just missed Monster Cup.

And you also missed time this summer with the collarbone. So did you feel off or behind once you got back after it with supercross?
You know, after the collarbone, it took three to maybe four weeks to start riding again. I was back at Baker’s Factory and riding; yeah my shoulder was a little sore, it’s not like I was able to do the long motos again, but I was still riding and getting stronger. So overall, I only lost about six-total weeks with both injuries, which is really pretty killer. I’m very fortunate that the injuries weren’t as bad as they could have been. The off-season has actually been pretty normal for me.

Do you remember this whole des Nations deal?
Yeah, I remember everything. Obviously it started when I broke my foot the night before.

Yeah, how scared were you the night before the race, trying to nurse that foot?
Honestly, I was more worried about doing more damage to it that would hurt me down the road. I didn’t want to prolong the injury, but they taped my foot up to where I couldn’t move it, and it was numb, so after that I basically didn’t give a shit. I just was ready to ride! I could still use my back brake, that’s what mattered, if it was on my shifter side it maybe could have been worse. I could feel the bone moving the whole moto, but it didn’t hurt, it was just a weird feeling. But they did give me a shot, which probably made it hurt less.

During that moto, you guys didn’t even have good gate picks, you’re hurt, and all of a sudden you pull a holeshot! What was that feeling like?
Des Nations is such a different pressure. It’s almost like being a kid again, you’re not thinking about money or anything like that. You’re racing for pride. And the fans, it feels like a supercross, you can hear them and they’re so loud with the chainsaws and all that, even on the hot lap they’re loud! So once you’re riding, you just kind of zone out. I’m pretty pumped that even though I got laid out, I still remember everything that went down.

Yeah that would have been a shame to not remember winning that one. So you weren’t knocked out that badly?
No, just a few seconds. I remember going down the hill and falling down on the ground. My scapula was broken, but to be honest I didn’t even know it was broken.

But there was no chance of racing the final moto, right?
First of all, I think head injuries are something that should be taken seriously. But if it hadn’t been broadcast live on TV, and if everyone hadn’t saw it, and it had happened in the back of the track … I felt pretty good, actually. I wasn’t sore, and we’re dirt bikers, we’re dumbasses, so we probably would have tried to do it.

Yeah but at the time we all thought you were dead!
[Laughs] Yeah, exactly!

Did your phone work?
No! Nothing, nothing! It was crazy.

So you’re back at it, no injuries, do you feel even better than last year, when you won this race?
I feel like everybody feels pretty awesome when they’re coming into this race. We’ll see how I do. But I feel … nothing really surprises you in the first race. Especially after what I did here last year. But yeah, I definitely feel good.

You’ve done really well here—a first and a second in 450s, you won the 250 race the year before that. I feel like you ride looser than a lot of the other guys, and you don’t get as nervous on a night when a lot of guys are really nervous.
I mean, I don’t really get too nervous. But I don’t know, we’ll see how it goes. I don’t change too much, race to race. I feel the same every week. I’m just going to try my butt off the whole season. Last year, I was second and third a lot, I could get second if Kenny [Roczen] messed up or Ryan [Dungey] messed up, I got that win in Detroit, I was running second at the time. So I had a good season, but this year, I just want to be that guy that’s up there, all the time. Last year, I could be second through fourth at every race, but I want to be a threat to win every weekend.

Well a lot of that is, I don’t think your starts were there at the beginning of the year. But they did get better.
They did. Also a lot of it is, doing a whole moto in the lead is a lot different than a whole moto in second or third. I want to be like a leader.

Last thing: do you want to defend yourself from all the times people say, “Oh man, Anderson is aggressive. He smashes people.” But from what I see, it’s from when you’re trying to come through the pack—you’re just trying to make passes.
Yeah, I definitely feel like when you’re coming through the pack and you’re trying to pass someone, I definitely don’t want to put anyone on the ground on purpose, but I’m just trying to do good! I’m trying to earn a paycheck and freaking kill it that night. I want to be on the podium, and a lot of other guys want to be on the podium. So sometimes you have to do what you have to do. I don’t want people to think I’m disrespecting them. I’m just trying to do good.