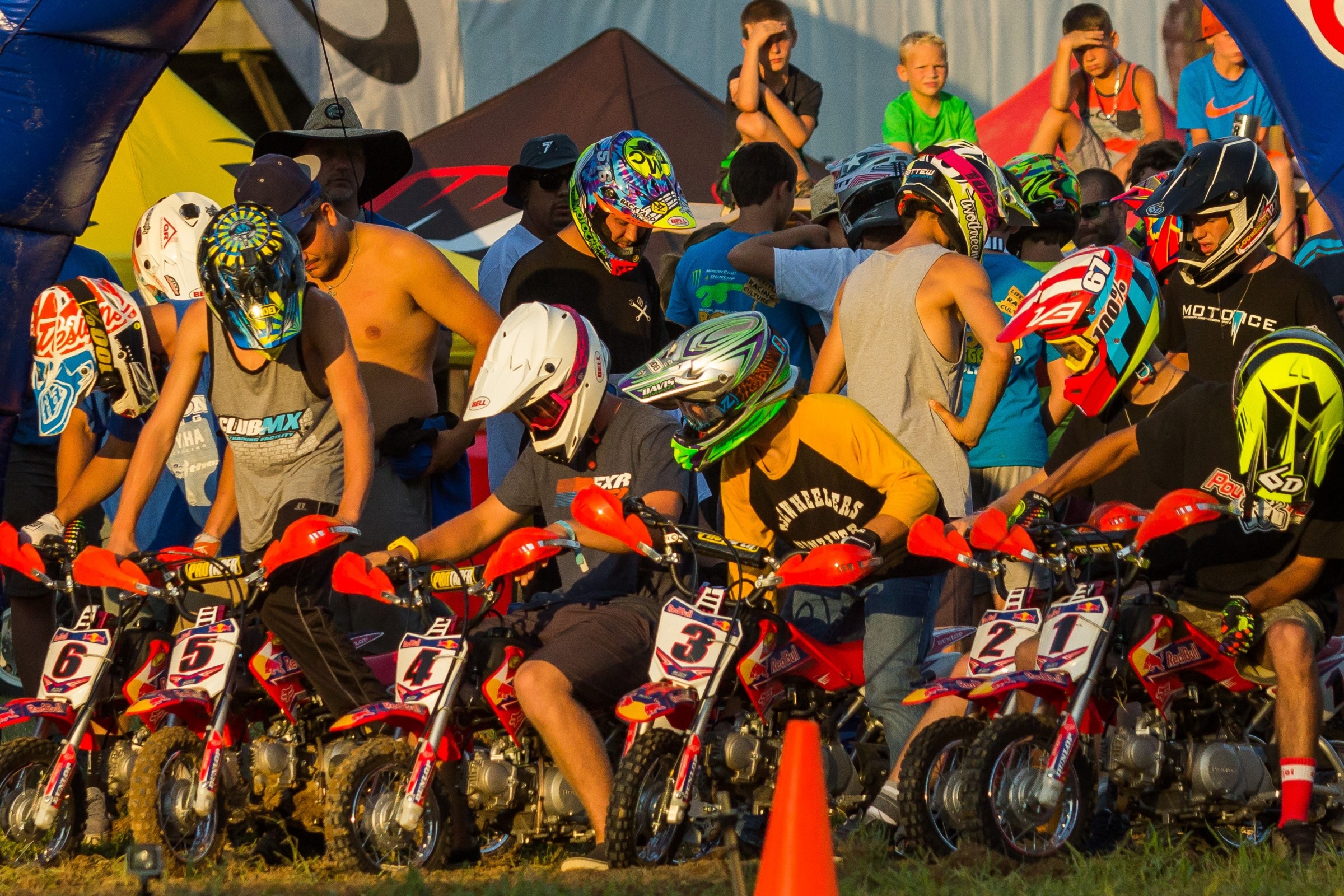 I watched a lot of races this year but one really stood out for me. It was barely even a race, per se, but it was awesome. It was called the Sidewinder, and it was developed by Harold Martin and his Moto Playground amateur magazine. Basically, Martin and company carved out a series of S-turns in some grass out back of the Area 3 camping ground at Loretta Lynn’s Ranch. Yamaha donated TT-R 90 and TT-R125 mini bikes. On a Thursday night, during the Rocky Mountain ATV/MC AMA Amateur National Championship, they let it rip. Anyone who wanted to try the Sidewinder was welcome. Sign up, grab a helmet, wait for the gate to drop, and race some corners against the clock. That’s it.

The Sidewinder featured no jumps and no passing. It also featured lots of crashes due to cross-rutting, tip overs, and washouts. No injuries, though, because everyone was going so darned slow. I also don’t know who won, or who even participated. It was just one random person with a helmet after another. I suspect, because many of the riders weren’t that good, we were watching brothers, sisters, moms, and dads of the actual Loretta’s competitors in action. But you know what? They could all throw a leg over, feel like they were riding on the edge, and have an amazing time on a dirt bike with very low risk. Where’s that been?

Motocross has been working the center pretty hard for a while now, and it’s making things a little fuzzy on the fringes. Back in the ‘70s dirt bikes were pretty much all about good times. Southern California was awash in kids on bikes, not unlike the TT-R90 and TT-R125, just riding all day in a low-pressure, low risk situation. The sport kept growing, refining, and polishing. Bikes are better, training is better, preparation is better. Better is better in most cases but it’s a little tough here, because the fun part gets compromised as the risks and sacrifices heighten.

You can now cue the “blame the four-strokes” stump speech, but a lot of this seriousness is just a product of competition—homeschooling and full-time training for kids, a prerequisite for winning was coming no matter what. You know what else is strange? Motocross is one of the few markets where bikes are not sold around tiered price points. Look at street bikes or mountain bikes and you’ll find a variety of price points with varied features. But if you want to buy a dirt bike, your choice is to buy the latest and greatest, or some entry-level bike that hasn’t been updated since the 1980s. Imagine if the mountain bike world only offered steel-framed rigid bikes and full-on carbon downhill bikes with nothing in between.

The serious thing was happening on the street bike side, too. By the 1990s, you were one of two things: mega Harley-Davidson Hell’s Angel stereotype guy, or “crotch rocket” sportbike star. The ante kept getting upped in those genres, until it all fell apart for road racing (in the U.S.) due mostly to the economy, but partly due to troubles with the AMA Superbike Series. Also, Harley-Davidson realized the Harley crowd wasn’t getting any younger.

But you can’t kill motorcycles, because they’re too damned fun. The street world is rebuilding itself around new niches. There are still Harleys and sportbikes, each one faster and Harley-er than the next, but the fringes are falling into focus. Honda’s Africa Twin and the KTM Adventure line are blurring lines between dirt and street. The Honda Grom and competitors like Kawasaki’s Z125 are going way old school, when bikes were very small, very slow, very cheap, but also very fun. Then you have the scrambler crowd, led by Ducati’s bike that is aptly called the Scrambler, and a variety of competitors which are scrambling to create their own scramblers. These bikes aren’t designed to dominate any particular thing—they’re not race bikes, not cruisers, not intimidators—they’re just bikes.

Then there’s the entry-level stuff. Honda has a CBR300R and Yamaha a YZF-R3 (300cc) as a gateway to the sportbike world. KTM has a successful line of 390s, which are in ways the opposite of what we know of KTM in this sport. On the dirt side, KTMs are premium products with the power to match the price tag. The 390s are small, light, simple ways to enter the road world. Because KTM lives by its Ready to Race tagline, they put a series on for them called the RC 390 Cup in MotoAmerica—not unlike the KTM Jr. SX challenge in supercross—and they want the point of entry to be so low that they asked amateur motocross prospect, Max Markolf, to try one. Literally, never rode a street bike, and go to a race on a track. KTM’s point was to show noobs that a motorcycle doesn’t have to be intimidating.

Motorcycles will always be fun, and always be cool. Very few things can be both at the same time. The street bike world is much different than motocross, because many road bikes are purchased without even considering the illusion of racing. On our side, we all want to feel like we’re Ryan Dungey or Ken Roczen. Still, we need to work the fringes to make sure more people understand it. I guarantee you one thing: everyone that tried the Sidewinder left wanting to do it again.