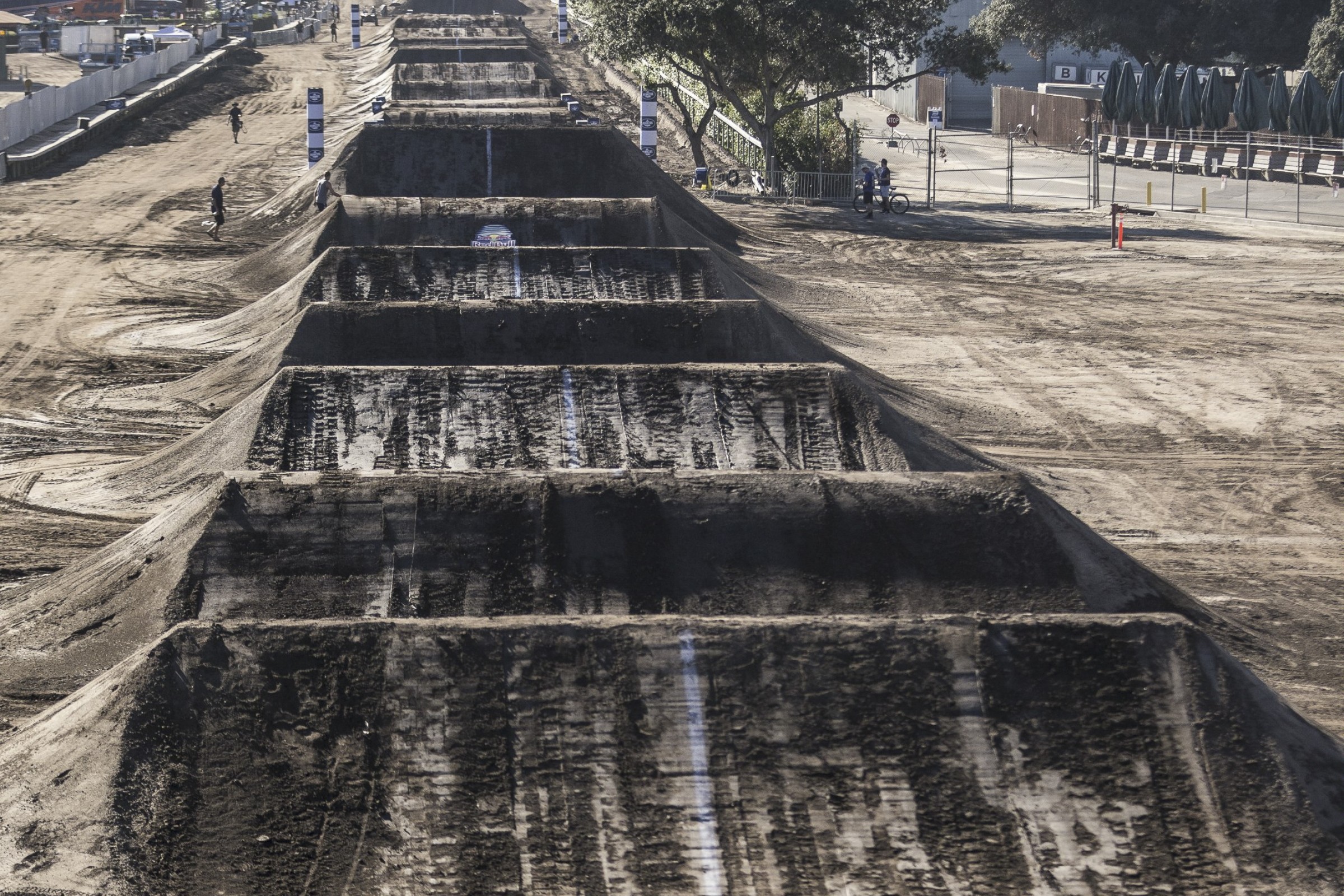 Red Bull Straight Rhythm has returned for the third year and it looks like there's going to be some close racing tonight. That's right, tonight as were racing under the lights for the first time. The two biggest things I'm looking forward to seeing are Josh Hill racing the Alta electric motorcycle in the Lites class and the Ronnie Mac vs. Trevor Piranha.

The first 450 qualifying session just ended and Marvin Musquin was the fastest. Josh Hansen is looking as smooth as ever and Trey Canard has made is Red Bull KTM debut.

The track is looking good and provides some good options for the riders in the rhythms. The "speed check" wall jumps are a little different than they have been in the past. Previously they were a tall single that resembled a spine jump you'd see at a skate park. This year, they're more like short tabletops with a really steep lip. If you didn't know already, the idea behind these speed checks is they essentially replace a corner and are designed to slow the riders down between rhythm sections.

The section riders seem to be struggling with the most is the whoops. Some are blitzing the tops of them whereas others are sending in and wheel tapping through. Darryn Durham went down in qualifying when he over jumped into the whops, missed his wheel tap, and then crashed into the face of the speed check. There are no updates on his condition as of now.

The full list of riders is here, but unfortunately Axell Hodges won't be attendance. Axell fractured his wrist in a crash during the FMX Quarterpipe Big Air competition in Las Vegas last weekend and was forced to sit it out.

The Lites class qualifying just finished and Jordan Smith was riding very aggressive aboard his new KTM, but Mitchell Oldenburg was just a bit smoother and edged him out for the fastest time. The Troy Lee Designs KTM team swept the top 3 qualifying positions.

Ronnie Mac vs. Trevor Piranha just finished up and it was goon riding we all hoped for. Ronnie Mac took the win and hit the finish with his front end and head high.

As expected in the first round, these races were pretty once sided. Austin Politelli and Deven Raper had the best battles and had to go to the third race to determine the winner.

Freise and Canard had a great battle. They were neck and neck the whole race and on the last jump Freise hucked it all the way past the flat and into the face of the finish (not like last years OJ) past the chalk line going for the win, but Canard just barely snagged it from him. Hansen and Chisholm also had some close racing. Chisholm took the lead from Hanny in the whoops, but Hanny re-gained some momentum in the step-on-step-off and took the lead over the sand sections. Chisholm is riding really well, but unfortunately his night is now over.

In the first race Josh messed up the rhythm in the first third of the race and it was over. In the second, Oldenburg had a good drive from the beginning and had a half bike length lead over Hill until the whoops where Hill has been making up time all night. After the whoops they were dead even until the sand where Oldenburg scrubbed a little harder on the speed check and pulled it back out for the win.

Smith and McElrath have taken the cake for the most exciting racing of the night. In the first they were were neck and neck and it went down to a photo finish. Similar to Freise’s move earlier jumping all the way to the chalk line, Smith took the win from McElrath by less than a wheel. In the second race Smith got a little squirly in the whoops and was hanging off the back reaching for a wheel tap and then scrubbed so hard off sand triple that he flung a trail of dirt in the air like a flat bottom jet boat in Lake Havasu, AZ (minus the leathery old lady to your left). I really hope someone got a photo of that.

Musquin has been smooth all day. He takes the easy win over Canard in race one.

Hansen with a good start. dungey did not have a good drive off the landing of the drop in start. It was Hansen for the first quarter of the race, but Dungey has been flawless in the whoops all night and tightened it up. Hansen turned it up after the speed second speed check and pulled Dungey back in. Another one down to the wire and Hansen took the win by a spoke nipple.

Musquin had a nice lead again, but after the step-on-step-off Canard turned it up and charged back to Musquin, but couldn't quite make it happen.

Hansen took the holeshot again, but Dungey wasn’t messing around this race and he rode with much more intensity than the first. After the first speed check Dungey had the drive and executed the whoops well, but it’s the second half of the track where Hanny is the strongest and almost stole the win again, but it wasn't enough.

In the third race,  Hanny did a quad off the dragon’s back near the start and took the early lead but by the first speed check Dungey had him by a bike length and then pulled a second through the whoops. Hanny came up on Dungey through the final rhythm just like in the first and second races. And just like those two races Hanny jumped so far into the finish he had to roll it. But going to the finshreaching for the chalk that he had to roll the finish, but this time he wasn’t letting off and just barely beat dungey for 3rd podium spot.

As I said earlier, Smith is looking good on his new KTM and took two second wins over Hill each race taking the final podium spot in the Lites Class.

It's good to see McElrath back to his normal form after his horrific crash at Southwick this summer. To be honest it was hard to tell the #28 TLD KTM of Oldenburg apart from the #38 TLD KTM of McElrath in the same neon orange gear, until the second race was over. They were neck and neck both races, but McElrath was able to sweep the finals and go 2-0. TLD KTM seeps the podium.

Musquin swept the day from qualifying all the way through the night show with an undefeated record. The first race came pretty easy for him over Dungey. The second race however was a battle. Although Dungey did make a come back, Musquin maintained the lead the whole race into the 100 yard dash you could tell by Dungey's body language and that he know he had been beat and just finished it up. In the live interview of Musquin right after he pulled his helmet off after the race he looked like he was ready to go to dinner, sweat free and hair gelled. Nice riding Marvin. Hansen's win over Canard prevented KTM from sweeping both the Lites and Open class podiums.