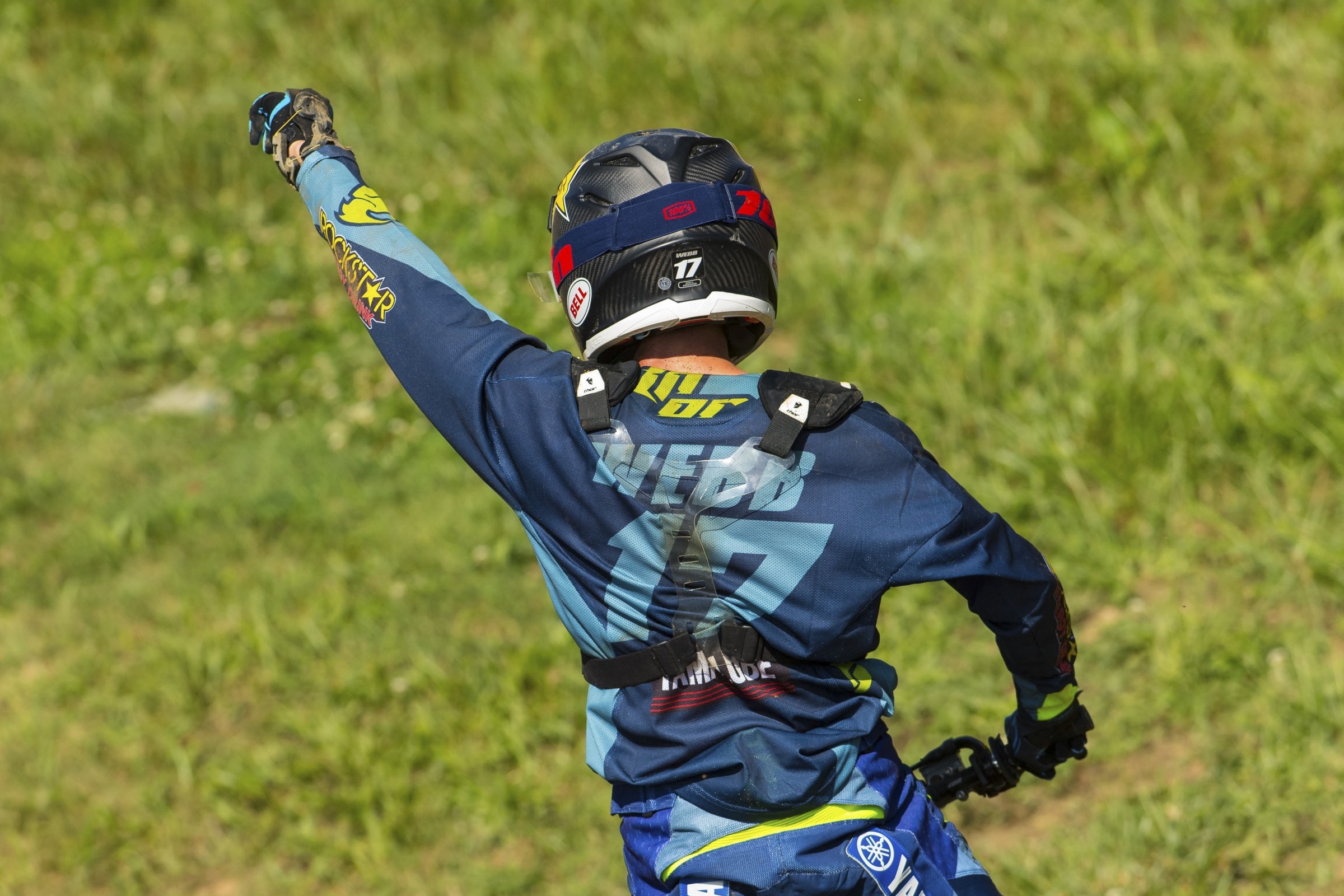 Sports are skill competitions, but the moments we care about come from the head and the heart. This happens during what’s called “winning time,” such as the fourth quarter of the game, when everything matters. In motocross it doesn’t always come down to the end, but somehow the stars, planets and moon aligned over the weekend at Muddy Creek, leading to close combat into winning time. It was too good to ignore. RedBud is coming and it should be great as well, but Muddy Creek’s action is worth digging into over and over.

“It just comes down to who is willing to suffer the most,” said Shane McElrath after leading most of the second 250 moto. “It was hot out here and it came down to who could bite the bullet the hardest.”

Cooper Webb bit down hard. Once he’d moved into third place in the moto he had the overall win. His 2-3 would edge McElrath’s 5-1. McElrath was only in contention because he won a torrid last-lap fight with Jeremy Martin in moto one. JMart passed him for fifth, only for McElrath to pass him back in the final turn of the race. That one pass nearly opened the door for Shane’s first-ever professional win.

This was not about overall wins for Cooper Webb. He just wanted to win the moto. Period. Just for points. And probably even more, just for pride.

While struggling with a wrist injury, Webb has been a wounded warrior for 10 weeks. Early in this season we were openly debating if he could sweep the 250SX West Region championship. But that was January! That’s the tough part when riders of this caliber are riding hurt. Cooper has done a masterful job riding with a broken navicular—often a death sentence in this sport—and salvaging enough points over four rounds to stay in the title hunt. But all that did was piss him off. He was on the podium at High Point and said he rode like shit. Podiums? Points? He wants to win some damned races again.

So he bit down hard. First he blasted past his teammate Alex Martin to grab second, then he chased McElrath. But McElrath was riding well! Shane has always had talent and a good, smooth style, which is what led TLD’s Tyler Keefe to snap him up during a big week at Loretta’s in the B class several years ago. Shane was basically an unknown on the national level, but after a week where he went toe-to-toe with, you guessed it, Cooper Webb, Tyler saw something in his style and technique. The ability is there but Shane has struggled at times to close the deal. You hear that he rides beautifully during the week, but it doesn’t always come out at the races. It did this time. He rode like he had led 100 motos before, making few mistakes. He didn’t lose this one—Webb just went out and won it.

It really came down to lap 16, when the two-lap card was coming out. McElrath ran a solid 1:59.9. Only three other riders in the moto were doing sub two minute laps at that point: Austin Forkner and Jordon Smith, who also had 1:59s, and Webb, who ran….wait for it, wait for it….a 1:56.1!

By the way, Webb got into second in the first moto and didn’t try to mount that kind of charge, settling for second. He said his trainer, Gareth Swanepoel, yelled at him for backing off, but it might have paid off. This was a humid race day and while the track wasn’t the all-time roughest, those tight, rutted conditions are energy sappers, both mentally and physically. Perhaps Cooper leaving something in the tank in moto one paid off in moto two.

A fan actually tweeted me with that same theory in the 450 class. Ken Roczen is absolutely brilliant on the first laps of these motos. His biggest advantage over Eli Tomac would seem to be his starts, but it’s not just about the actual start. Even when Kenny hasn’t gotten a good jump, he performs some sort of crazy magic to make instant passes. A few turns into the race, it looks like he had a good start! Second moto at Glen Helen, I didn’t even see him going into turn one, but by the end of that big Talladega turn, he nearly beat everyone to the holeshot stripe. He didn’t get a great start in the second moto at Hangtown, he just blew past dudes. He makes things happen in a hurry.

“In my eyes, there’s no way to train that,” Roczen said. “Like I’ve said, I’m a racer. I struggled really bad in practice but I don’t care about practice. As soon as the gate drops I’m on. It doesn’t seem normal for other riders to be like that but for me it seems normal. I don’t know why.”

Tomac was left trying to figure it out after moto one, where he started ahead of Kenny but saw his rival slip past him.

“That moto came down to the first four or five corners, because Roczen snuck by me there, somewhere around there,” said Tomac after the first moto to Georgia Lindsay. “I have to stay in front of him the next time and charge that first lap.”

Well, Tomac was indeed ahead again on the first lap of moto two, but Roczen slipped past him again! For most of the moto, it looked like Tomac would end up settling for second again—until lap 15. Roczen had been turning 1:53s for much of the moto but went into the 1:56 range on laps 15 and 16. Tomac ran a 1:53 and a 1:54. The white flag was out and Tomac was on him. The riders will never admit when they get tired, but there’s a chance Tomac going slower earlier made him faster later.

Winning time? Tomac knew he had one good opening on the last lap, running an inside rut in a right-hander. He absolutely murdered that corner to try to make the pass.

He might have done it, but the very end of the rut slowed him, and Roczen jutted back ahead. That was Tomac’s best and last chance. If you watch the next turn, another right-hander, it almost looks like he knew it. Roczen ran a flawless final half lap to prevent any other attacks.

So someone hit me up on Twitter after this exchange. Perhaps Kenny’s all-out sprint on the opening lap actually meant he was a little more spent by the end of the moto? Kenny had enough in the tank to ramp it up on the last lap and hold Tomac off, but Tomac’s late charge was impressive. Both riders knew it was winning time, both riders went all out on the final lap. It came down to guts, heart and pressure, which is what we want from all sporting events. We just like it most of all when it happens in this one.