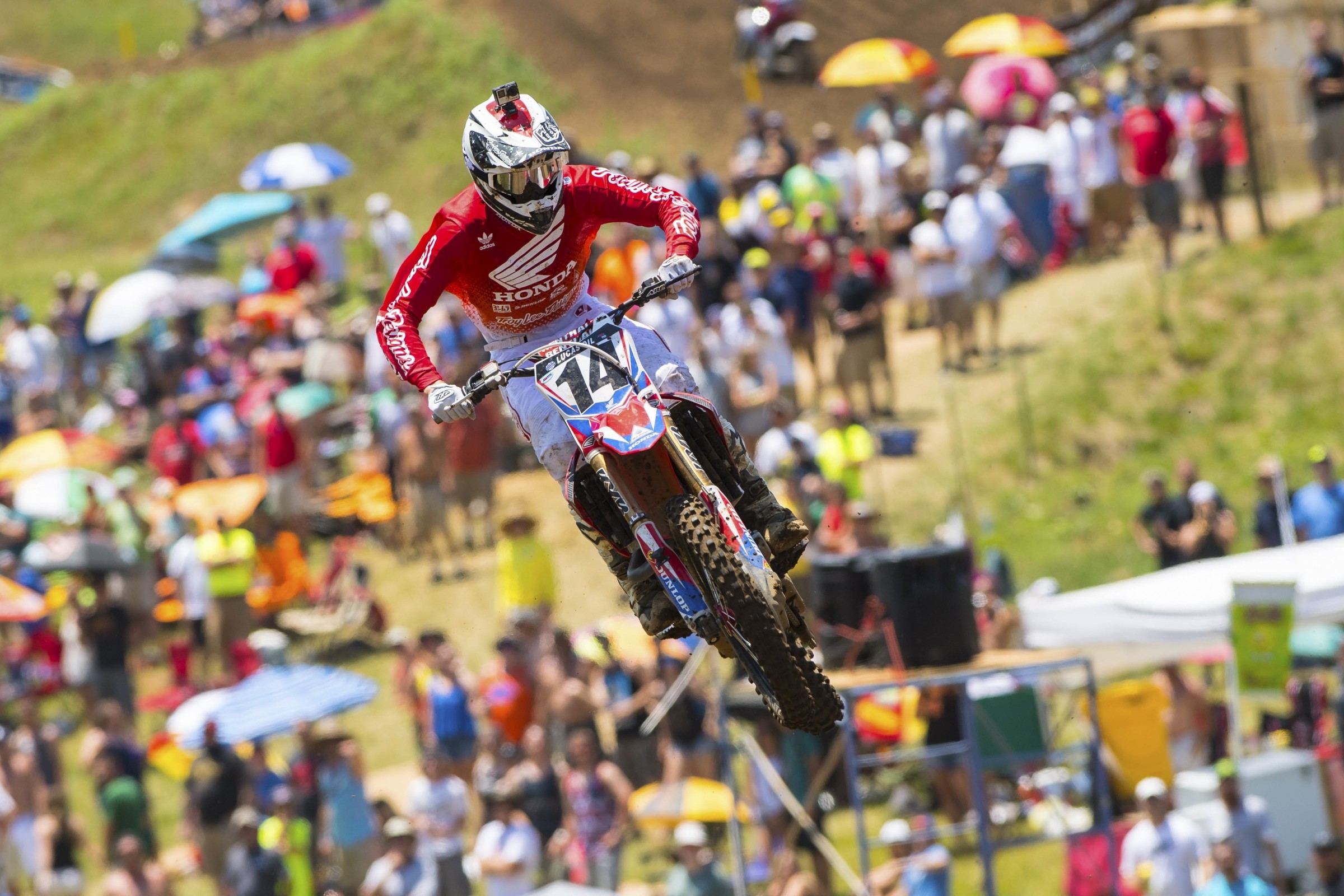 Although the 450 class was missing a ton of star power this weekend—Ryan Dungey, Jason Anderson, Trey Canard and Josh Grant, among others were all out with injury—Eli Tomac and Ken Roczen delivered a great race. Yes, Roczen went 1-1 for his fourth overall (of five) on the year, but this was the hardest he’s had to fight so far. “Obviously Eli crushed it today, but for me it doesn’t matter if I win by twenty seconds or half a second, but a win is a win for me,” he said after the race. “He’s been fighting hard but I was able to keep him behind me and that’s really all I care about and all that matters.”

If you’re Tomac, who has struggled to keep pace with Roczen, this has to be looked at as a step in the right direction. In the second moto, Tomac actually caught Roczen late in the moto and nearly took his first moto win of the season. “We were both giving it our all there,” said Tomac in the post-race press conference. “Obviously we both want it really bad. In the second moto I was closer in the end, nailing my lines a little better and getting around lappers a little better.”

For a more detailed look, check out their laps times in the second moto.

Honda HRC’s Cole Seely led for the second time this year—and what a lead he had! Seely holeshot the race, was shuffled back to fourth, then went back into the lead and started stretching it immediately. He held strong for nine laps before being passed by Roczen. In his second full-time year in the class, Seely has made an effort to improve outdoors, and it’s showed. Following his second moto podium of the year, Seely finished sixth in moto two and now sits third in points. “It’s great to be third in points, but I’m just taking it race by race,” he said in a team statement. “All that really matters is trying to get the best moto finishes I possibly can each weekend. At this point the title is out of sight, but I want to win motos and I want to win races. I’ve never been able to have that in my sights, so to be in contention for podiums and wins is obviously an improvement and I want to capitalize on it.”

Seely’s teammate Trey Canard missed his second consecutive race due to a bulging disc in his back. The team said Canard would continue to be evaluated on weekly basis. There is no timetable on his return.

With a neck injury from supercross finally starting to heal, Christophe Pourcel is beginning to round into shape. After setting the fastest time in qualifying, Pourcel finished fourth in the first moto and fought back to eighth in moto two for sixth overall. Pourcel, who started the year with zero top fives through three rounds, now has two moto top fives in the last four motos. “I’m still trying to improve on myself and the bike. Overall it was good, and ending up sixth overall is not too bad,” he said in a team statement. “The goal is to be in the top five so I’m close. I’ll try to get that next weekend.”

The musical chairs at Yoshimura Suzuki continued for another week. James Stewart was slated to return this weekend at Muddy Creek but ended up staying home in Florida as he and his wife await the arrival of their first child. With Stewart out for the fourth consecutive round, Matt Bisceglia filled in for his third straight race. The former MAD Racing/Dirt Candy Suzuki 250 rider was solid again, going 14-12 for twelfth overall. In the first moto he worked his way from 37th to 14th after crashing in the first corner. “It was definitely a hot day today. I gave it everything I had and that’s all I can ask for,” he said in a statement.

Blake Baggett returned after missing the last two rounds due to a broken collarbone sustained at the opener. He also tells us he’s injured his rotator cuff, although it doesn’t seem like that is hurting his riding. In the first moto Baggett worked from 15th to 8th. He followed it up with a 7th in moto two for eighth overall. “All in all, it was pretty good,” Baggett said in a team press release. “I was inside the top ten in both motos. It’s a step forward and not bad for a comeback.”

Justin Barcia ran into Phil Nicoletti in the first moto and they both went down. Nicoletti recovered for tenth but Barcia ended up with a DNF. That was bad. But overall there were good signs for the struggling AutoTrader.com/Monster Energy/ JGR Yamaha team, led by Weston Peick’s best result of the season, with 5-9 scores and seventh overall. It’s the first time Peick has put together two top tens in the same day this year, and he actually only had one moto top ten before this event. And while DNF-5 doesn’t sound great for Barcia, and a 10-DNF doesn’t sound great for Nicoletti, there was some speed there for both. Nicoletti briefly took the lead from Cole Seely in moto one and led for a half lap, and Barcia was trying to stick wheels in on Ken Roczen early in the moto. When Roczen passed Nicoletti, Barcia was quick to try to follow him through—too quick, it turned out, and he knocked his teammate down. Still, that’s more gusto than we’ve seen from Barcia all year, and his second moto comeback was solid. Maybe things are turning around for these guys?

Cole Martinez is off to a solid start with CycleTrader.com/Rock River Yamaha. Since beginning his fill-in role with the team, replacing the injured Tommy Hahn, Martinez has scored points in all four motos. He went 18-13 for fourteenth overall at Muddy Creek. He will remain with the team for the rest of the season.

We will have more on Noah McConahy later in the week, but credit to the privateer out of Spokane, Washington, who after 17-20 finishes on Saturday, has scored points in eight of ten motos, including six straight.

Heath Harrison was another privateer who shined at Muddy Creek. The Alabama native went 12-15 for thirteenth overall in the 450 class. With his fifteen points scored on Saturday, Harrison moved from 32nd to 24th in 450 standings.

So many things at play in this moto, which was a great one. Roczen got around and away from Tomac on lap one; Tomac then went faster and caught him as Roczen battled Seely. Then Roczen found another gear and got back away. Yet Kenny only had the third-best lap of the moto. Seely is showing serious speed lately!

Savatgy had control of this most of the way. No one would suspect he only had the third-best time. That's how motocross works, people!

Cooper Webb leads one lap, has the fourth-fastest time, and wins. We love these races!

Looking for an interesting stat? Cooper Webb has led just six laps this year. That’s 17 less than Jeremy Martin; 12 less than Alex Martin; 11 less than Shane McElrath and 5 less than Zach Osborne. Yet, he leads all of the aforementioned riders in points. More incredible, Webb led just 1 lap at Muddy Creek this weekend. That’s right, the 250 class winner led 1 lap!

Check out a breakdown of laps led in the 250 class.

Monster Energy/Pro Circuit Kawasaki’s Adam Cianciarulo also led 1 lap on the weekend, but due to multiple crashes in both motos finished sixteenth overall via 11-22 moto scores. Certainly not great finishes, but you could make the case AC looked much, much better up front on Saturday than he did the week prior at High Point.

“The speed, the confidence and all the other pieces are coming into place and it feels good. In the second moto I was taken out pretty bad by another rider and fought as hard as I could for the rest of the race. I ended up 11-22 on the day for 16th, which isn’t what we wanted, but I didn’t give up today and I’m proud of that.” We talked to Cianciarulo’s dad, Alan, after the race and he said this is the first week where Adam has done any work on speed—up until now he’s just been trying to rebuild his base fitness after so much time off the bike.

Cianciarulo’s rookie teammate Austin Forkner had another solid, under-the-radar finish on Saturday. The Missouri native went 10-4 for seventh overall and is currently sixth in points through five rounds. His fourth in the first moto was his fifth top-five moto finish of the year. “I didn’t feel as strong as I would have liked in the first moto due to a poor start, but my lap times were pretty good,” he said in a statement. "In the second moto I got off to a much better start and was able to ride my own race. I brought it home in the second moto for a fourth and I’m just going to keep building on these results.”

Coming off his first career moto win at High Point a week prior, Zach Osborne, who grew up 30 minutes away from Muddy Creek and was a regular at the track as an amateur, was confident he could capture the overall on Saturday. A third in the first moto put him in a good position, but he went down on the start of the second moto and could only work back to 10th after starting 24th. “A 10th in the second moto was a really good ride, but it doesn’t really show on paper,” he said in a statement. “It’s frustrating to have such a good first moto then kind of throw it away in the second moto—but it happens. I made up some ground on the people in front of me in points.”

The hard charger award has to go to Yamalube/Star Racing Yamaha’s Aaron Plessinger. APless went down early in moto one and went from 23rd to 14th. In the second moto he was down on the start with Martin Davalos and came from 37th to 13th. As for Davalos, he was unable to finish the race due to bike problems. “I made a mistake in the second moto and got cross rutted and crashed really bad. My bike got messed up and I wasn’t able to finish.”