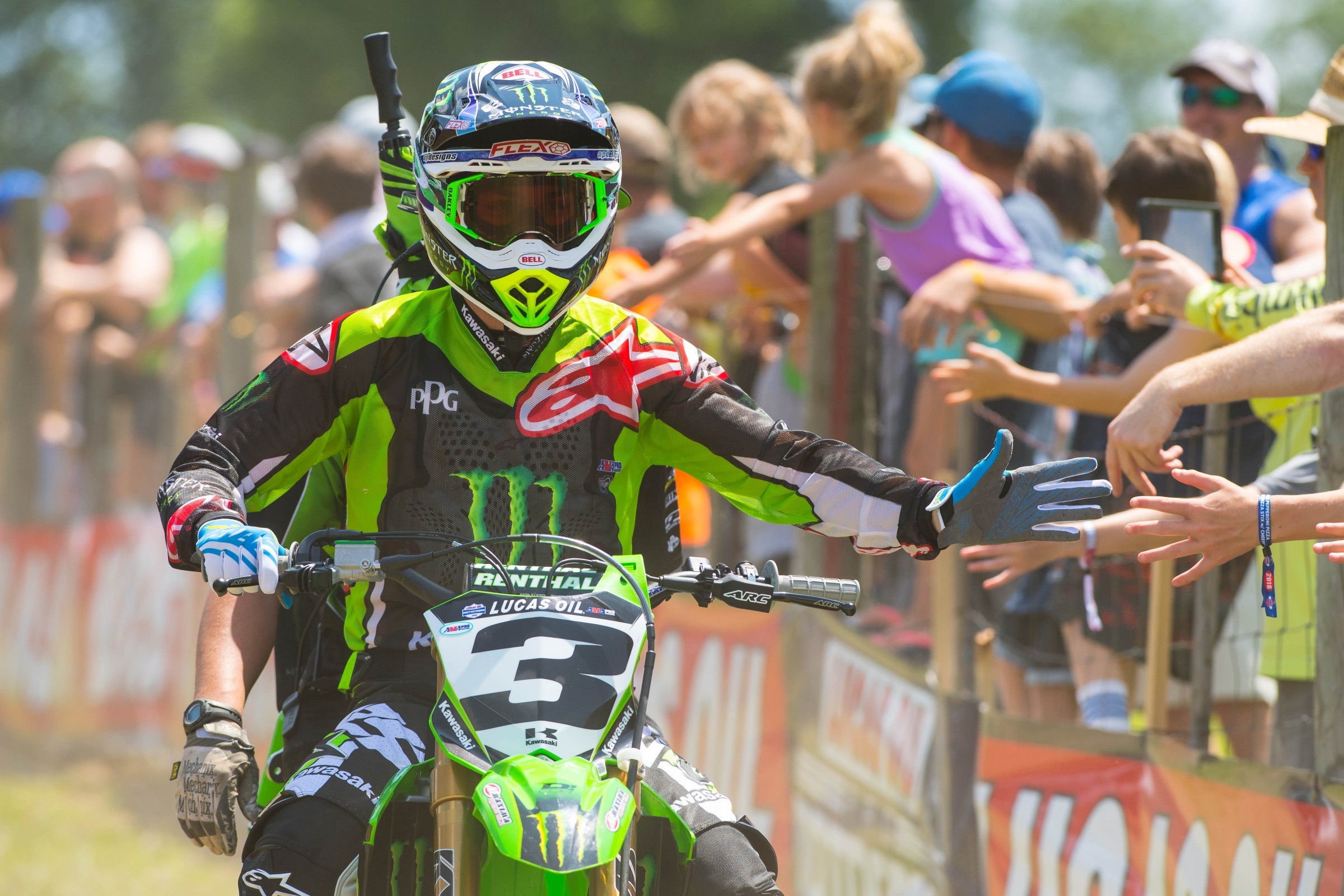 3 on 3 Questions After Muddy Creek

1. Is this boiling down to Cooper Webb versus Joey Savatgy for the title?

Aaron Hansel: When asked last week if the Martin brothers were in trouble after their mechanical DNFs at High Point, I was quick to point out what a silly question I thought it was. Now, one week later, I’m leaning toward saying yes, this is boiling down to a Webb vs. Savatgy matchup. That’s how fast things can change in this sport, especially in the 250 class. But potential for big change is also the reason I have to say no to the question, at least for now. There’s just too much racing left, too much time for weird and crazy things to go down. I mean, Savatgy crashed twice in a single moto at Muddy Creek, and two Star bikes blew up at High Point! What’s next? Will one of the contenders roll a rental car over or get arrested for disorderly conduct at RedBud?!

Secondly, while Jeremy Martin is down thirty-two points, more than a whole moto, you can’t write off the two-time defending champ just yet. He’s admitted he’s been dealing with an illness this season, and it does seem to be holding him back a bit, but if he can get past that I don’t think it’d be surprising to see him come storming back into the hunt. He’s going to have to do it soon though because Webb is only going to get stronger from here.

Jason Thomas: It seems that way but it also seems to change week-to-week. Alex Martin and J-Mart shouldn't be counted out yet because they are riding well enough to be right in the thick of this but mechanical issues and mistakes are costing them. Savatgy has also shown vulnerability to mistakes, proven by his strange second moto at Muddy Creek. As for Cooper, he was the biggest question mark of all entering this season but looks to have his wrist troubles behind him. Winning his home race is great but he has to show that he has that level at all of the other tracks before any and all concerns can be alleviated.

So, I don't know if it's necessarily just those two because wild point swings seem to be the norm instead of the "what-if." I think there will be many more twists and turns before the carb-laden lady sings her final song.

Chase Stallo: “As in out of the championship trouble? Ummm, no.” That’s a direct quote from me last week when asked if the Martins should be worried. I will now remove my foot from my mouth and pray the internet doesn’t keep track of these things. As Hansel mentioned, I think this mystery illness Jeremy Martin is dealing with is having a much bigger affect on him than he’s letting on. It’s hard for me to believe that a guy who won 19 total motos in 2014 and 2015 just can’t get it done this year. I’m sure we’ll find out more about his illness as the season rolls along, but right now there’s no way Martin is going to admit anything and give his opponents an advantage while he still feels he’s in the championship hunt.

I’m selfishly hoping the Martin brothers—or someone else—can jump back into this to make the series that much more intriguing. I’m slowly losing hope, though. Savatgy is showing few cracks in his armor and Cooper Webb seems to be hitting his stride. For now I’ll say no, but if the Martins don’t go 1-2 this weekend, it will be tough to stay true to that answer.

[Note: I’ve been informed that the internet does indeed keep track of these things.]

Is this boiling down to Cooper Webb versus Joey Savatgy for the title?

Hansel: Yes, no, and maybe. Hey, I like to keep my bases covered! I think without a doubt Shane McElrath benefitted from racing in front of his hometown fans. I can remember racing the 250 C class at Sacramento Raceway while I was in college and I always seemed to find another gear (second, to be exact) when even one or two of my idiot friends came to watch. Triple that if my friend’s girlfriend dragged a pack of her coed dorm mates along. Imagine how much that motivation would multiply with hundreds, even thousands, of fans screaming for you specifically! In his TV interview McElrath even looked out at the crowd and said, “I think I know everyone out there.” Oh, and before this, McElrath’s best career overall was a sixth. The local made the boy good over the weekend.

Everyone else falls into the “no” or “maybe” category. Cooper Webb wins no matter where he goes, so you can’t work the local angle with him, and Zach Osborne did better at High Point than Muddy Creek. Jordon Smith has been putting in great rides here and there all season, but this is the first time he put two together in one day, so, maybe. And Tickle? This isn’t the first time he’s been on the 450MX podium—he was there four times in 2012—it’s just been a while, so I’m going to attribute his great day to skill and holeshotting the second moto. Having serial killer Ken Roczen as a teammate probably doesn’t hurt either.

Thomas: I think that's a certainty. Some of these guys could make a case for it being business as usual but for a guy like McElrath, his previous best overall finish was a sixth place so this certainly has to be seen as an anomaly. He almost won the second moto! Jordon Smith definitely saw some southern hospitality as well but on the other hand, we did see a very high level from him at Hangtown to start the series, too.

The other guys are top five threats at any track. While I think they definitely felt the comforts of home, the gap between where they typically finish to where they finished on Saturday was close enough to seem like any other solid day.

Stallo: Yes and no. Cooper Webb was going to be in contention for the overall no matter if this was his home track or if his was racing in Siberia. But, I do think it propelled him late in the second moto when he was dead tired. He even admitted as much in the post-race press conference: “But honestly this weekend, it was the fans. Every lap I could hear them on the side of the fence cheering and that made me just keep going, just keep going.”

I certainly think it helped the others—to an extent—as well. It’s hard to replicate the feeling of riding in front of family and friends. Most riders say it “causes more stress” but that’s typically said after a good result. There’s something about being able to showcase your abilities to an entire group of people you care for that, in my opinion, helps people—riders in the case—up their game. Do I think everyone of these riders could replicate their results this weekend? Sure. But, I also think the home crowd made a difference—even if it was a small one.

Hansel: Encouraging, but probably more so for McElrath. Like I said above, before the weekend his best overall in Lucas Oil Pro Motocross was a sixth, so a third overall and nearly winning a moto is a big step up. Afterward he admitted he was frustrated when Webb got around him, but I bet you he’s still been on a high the last few days, especially since this result is quite a bit better than the first four rounds, where he was averaging 7.25 points per moto. It’s also got to feel good to go out and get a good result for the team, which has been decimated by injuries this season.

For Tomac, he still wants this championship so it probably was a little discouraging to give up six more points to Roczen (Roczen now leads by 47 points) when he was so close to at least stopping the bleeding. But he’s also been struggling to get back to form all year, indoors and out, so to be able to battle up front and legitimately challenge for the win has got to feel great. Getting second doesn’t feel great, at least not for a guy like Tomac, but the confirmation that you’re getting closer to the ultimate goal is encouraging. That said, I don’t think he’ll be happy if the same exact thing happens this weekend at RedBud. After nearly beating Roczen in Tennessee I think Tomac heads into RedBud with phasers set to incinerate.

Thomas: In both cases, it had to be encouraging but for very different reasons. For McElrath, he has never even come close to winning a moto so the adrenalin had to be pumping. Only a herculean end to the moto from Cooper Webb could derail a shocking moto win. For what has been a struggle so far in this outdoor season, that was a shining bright spot for both he and his team.

Eli Tomac's expectations for this summer are surely much more grandiose than McElrath but surely no less disappointing. He was seen by many as a title favorite but hasn't found that 2015 magic just yet. He has slowly been closing the gap to Roczen's white-hot pace and this was further evidence that he is making progress. It wasn't a win, no, but he can smell blood in the water.

Stallo: Encouraging. I think it fairly obvious as to why in the case of McElrath, so I’ll focus on Tomac. As Hansel said: yes, he still wants to win this championship, but he hasn’t shown the ability to do so until this weekend. He’s been visibly frustrated all year, so any result that makes Eli and his team feel like they’re making progress has to be a good thing. Look just at his Monster Energy Supercross campaign for further evidence. After an extremely difficult start to his first year with the team—not to mention coming off double shoulder surgery—Tomac finally got things going in Foxborough, looking the best he had in a stadium (Daytona is different) all year. He followed up with a second and third to close the season. So, I think it’s fair to assume that this result could propel him much better things down the road. That’s encouraging in my book.