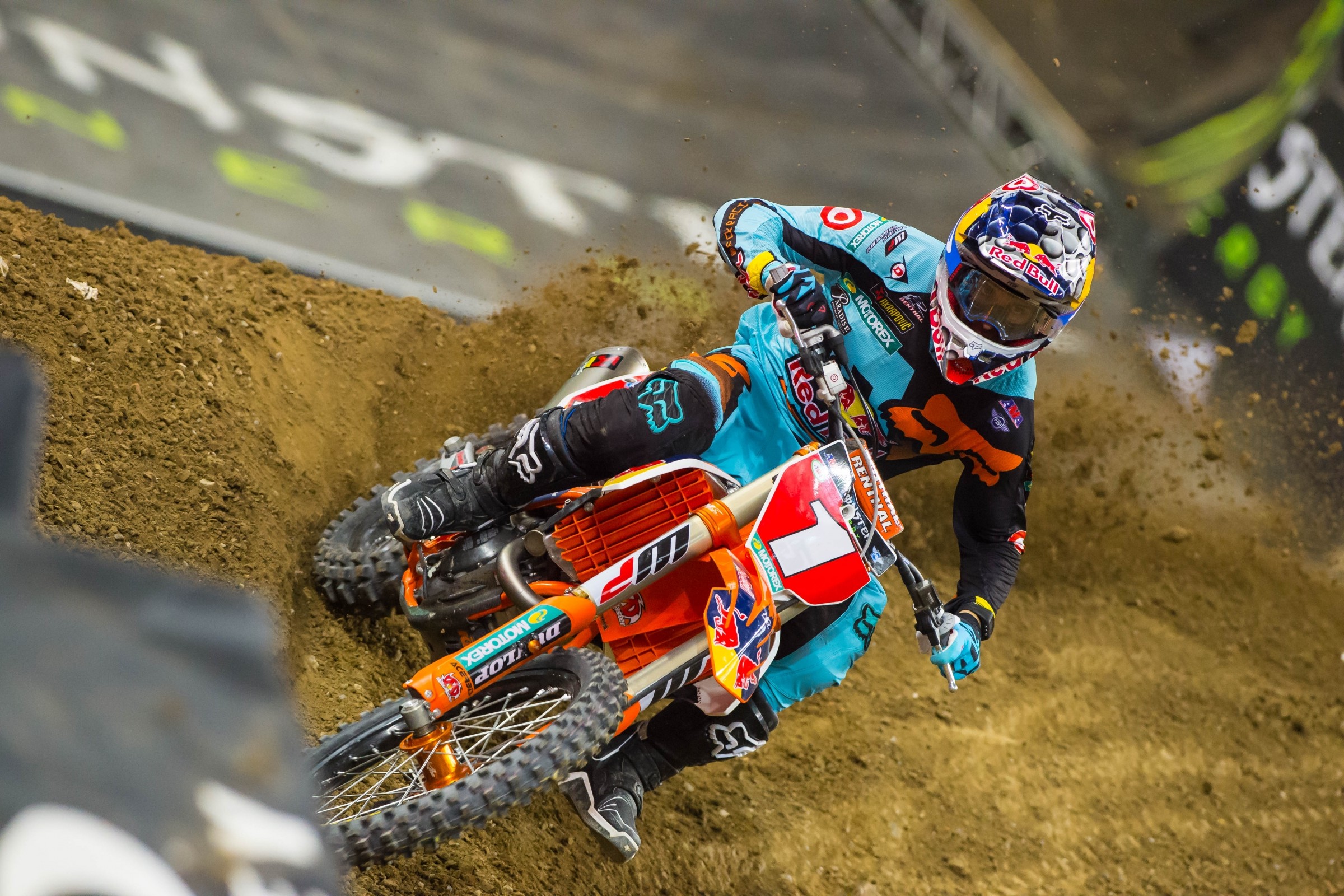 As soon as the first 250SX East Region heat race took off, you knew what Ryan Dungey would do in his 450SX heat race. Tyler Bowers entered turn one of the first 250 heat in about eighth place. He hugged the inside while his Monster Energy/Pro Circuit Kawasaki teammate Arnaud Tonus went in too deep and pushed the lead group wide. Bowers held his line and emerged with the lead—and went on to take the heat race win.

You knew what was coming from Dungey in 450SX heat two. I tweeted this moments before his heat began:

Attention 450SX riders: If Dungey gets a bad start tonight DO NOT LET HIM SNEAK INSIDE IN FIRST TURN. (Did that 3 times already this year)

A few weeks ago we chronicled Dungey using that inside technique in nearly every start this year. He basically lets everyone go wide, gets on the brakes, and emerges with the holeshot. Dungey’s starts have been strong this year, but all he really needs to do is get to turn one somewhere near the top five, and then he does the rest. It helps that Dungey is always fast in practice, so he always gets a good gate pick in the heat, which allows him to control the inside of the heat race start, get a good start, get the heat race win, then have a good gate pick in the main event, which allows him to control the start there as well.

He did this again in Detroit—let’s have a look.

Here’s Dungey in about seventh, but moments later everyone will go wide and he will have the lead.

There you go! The record books will record this as a holeshot.

Dungey has been doing this all year, but what’s interesting is that in Detroit he actually chose to use this technique from the get go. He’s pulled this move a few other times this year, but in those starts, he was in the middle of the pack and basically had to try something to escape. When you look at Detroit, though, he actually had a great start, and chose to get on the brakes early, gambling that it would pay off at the end of the corner.

You can see here that Dungey could have battled with Blake Baggett for the lead into turn one. He chose to brake early instead and let the field go past him and his gamble paid off.

In fact, after the heat race, Fox Sports’ Ralph Sheheen asked Dungey about hugging the inside and Dungey explained. “I think that inside will be the way to go—obviously you have the check the gate out. Eli [Tomac] was ahead of me there and kind of overshot it.”

You knew Detroit’s first turn offered up some opportunities when Trey Canard emerged with a good start (and a victory) in heat one. He used “the Dungey” to make that happen. Canard’s starts have just gone into the dumps over the last 15 months, which is bizarre because Trey has been a good starter throughout most of his career. He hasn’t switched brands or bikes, either—he basically just lost his starts.

In his Detroit heat race, Canard used the Dungey technique to square the field up and get up front in the heat. But in the main, he had no chance to do that, because his start was so terrible that he was basically last into turn one. Even the inside can’t help you pass twenty-two riders.

So with Dungey, it starts with getting a good start. The inside is just the insurance policy that makes good starts great.