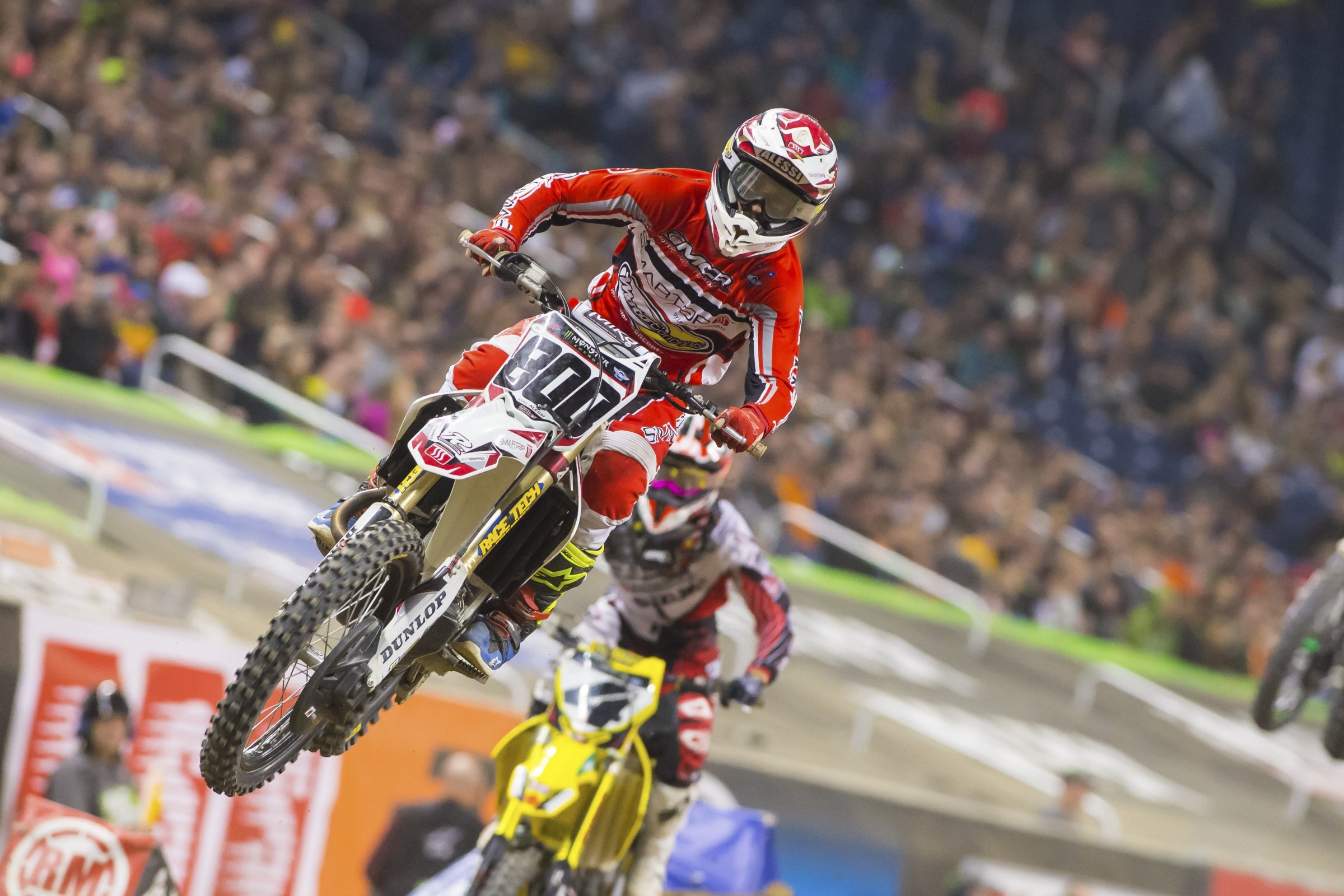 Soaring Eagle/Jimmy John’s/RCH Suzuki’s Jake Weimer will undergo tests this week to determine the extent of a shoulder injury sustained in the 450 main event on Saturday. Weimer bobbled and then was run into by Josh Grant (who had nowhere to go) and went down injuring his shoulder. He did not return to the race. This is the second straight year Weimer has been injured in Detroit, as this round last year was when Weimer and Trey Canard had their horrifying semi race crash that ended both the supercross season for both.

“Detroit -2 Me - 0. Little mistake and a little crash but fell right on my shoulder,” Weimer wrote on Instagram. “Little banged up but I'm going to get it checked today and do what I need to get ready for Santa Clara. Felt like I was in good position to get another top 10 but I'm glad the crash wasn't worse.”

As for Canard, he tangled with Blake Baggett while coming through the pack and crashed into the Tuff Blocks. Although he managed to come back and finish eighth, he wasn’t happy. “I’m extremely frustrated and mad with how tonight ended,” he said in a team statement.” I felt good all day long and was really happy with my bike. We made some adjustments to help keep the feeling consistent throughout the whole 20 laps, and I was really able to feel the traction where I was looking for it. I got a good start in the heat race, but couldn’t translate that over to the main, again. I had worked my way forward and was trying to pass [Blake] Baggett for seventh when he pushed me right into the Tuff Blocks and off the track. I feel like I was clearly going faster, but I let him have the inside line and instead of just taking it, he carried over right into me.”

Baggett had problems of his own shortly after that, as a flat tire ended his night. “I had a solid main event going,” Baggett said in a team statement. “I got a really good start and drove it down into the first turn and came out pretty good. I didn’t get through the whoops as well as I wanted to on that first lap, so I got shuffled back pretty bad right there. I was working my way forward from there got into sixth place and then we had the mishap (the flat) and I had to come in to do a pit stop. That set us back for sure, but it’s just one of those things that happen in racing every once in a while and we’ll bounce back.”

Cole Seely also had his problems early in the race, as he missed his rear brake going through the whoops and went flying over the Tuff Blocks. “I was too far back to really do too much with it, but I was able to get up to 11th,” he said. “Obviously, I’m pretty bummed on that but I felt really good on the bike and we made some positive changes throughout the day.”

This week marks the first since January that teams will have a weekend off for Easter holidays. No rest for the weary though, as most will begin testing for the upcoming Lucas Oil Pro Motocross Championship. Canard, Seely and Justin Bogle were scheduled to spend Monday and Tuesday at Canard’s private track in Edmond, Oklahoma.

“This will be our first outdoor test of the season, which is typical for this time of year,” explained team manager Dan Betley. “Trey has a couple different tracks that we’re going to do some testing on. Our focus for the week is chassis and suspension. We want to get a good base for the riders and get them comfortable. We’ll be starting with what we raced on last year and then building off of that. After this week, we’ll get back to supercross, but from here on out we’ll start to have some regular outdoor tests to get ready for the season.”

A week after grabbing his third win of the season, Ken Roczen struggled throughout the day—qualifying tenth—and never got going in the main event after another bad start. Roczen set just the thirteenth fastest time en route to sixth overall finish. “It seems like we struggled in the whoops,” he said in a team statement. “We had a pretty decent heat race. Going into the main, we definitely didn’t have the start we wanted. It just seemed like I got stuck behind (Weston) Peick. Normally the whoops are my strong point and we were definitely struggling in that part of the track.”

Peick, meanwhile, is finally starting to turn things around after a rough start to his season. The Autotrader/Monster Energy/JGR Yamaha rider began the year with that high-profile fight with Vince Friese, resulting in a two-race suspension, and then hurt his arm in a big crash late in the Oakland main event. He’s been racing through the arm injury and trying to get therapy on it—even working with the JGR NASCAR training staff to get some heavy-duty deep tissue massage and work the kinks out. Things finally started to turn last week with his first top ten, an eighth in Toronto, and then he topped it with a seventh in Detroit. With a weekend off, expect Peick to continue to feel better and get stronger heading into Santa Clara, where he scored his first career podium last year. By the way, Justin Barcia is expected back for that race as well.

Detroit's race wasn't the most exciting, and this lap chart bears it out—you rarely see a fast lap chart that follows the actual results of the race this closely. Well, obviously Anderson was credited with the win, but Dungey got to the checkers first. Also, Brayton and Baggett were way back in the results but that was because of flat tires. Remove the penalties and the flats and this chart is nearly a mirror of the actual results.

Except for one rider: Ken Roczen. When was the last time Kenny was 13th fastest in the main? We're going to say never. Not even looking it up. This is Ken Roczen, who won just last weekend!

We heard Kenny say post-race that it was a long weekend for him, flying up on Wednesday for Thursday press day. And with Detroit's weather in March, there wasn't much training going on. Maybe that sapped some of his enthusiasm by Saturday?

Another one with the top three reflecting how they crossed the finish line. One rider to note is Jeremy Martin. The former 250SX East points leader looked to have a horrible night with a 13th-place finish. JMart crashed in the first turn, struggled with a twisted bike, and then crashed again. Finally on lap five, he pulled into the mechanics' area so his wrench, Pedro, could get the bike straight. After that, JMart was on fire! He logged his two fastest laps of the race on laps six and seven, and largely matched the pace of leader Malcolm Stewart, all while working his way through traffic from last place, which is where he stood when he pulled back onto the track on lap five.

Here's a look at JMart versus Malcolm on lap times from laps six through 14. For certain, Malcolm was probably riding a controlled pace with a solid lead, but the data shows JMart was faster than the results indicate. His slow lap came on lap nine, when he got the blue flag and slowed down to let Malcolm by, and then on the last lap, when Malcolm was just ahead cruising, and JMart followed him home. If you watch closely over the finish line, Martin was only a few bike lengths behind Malcolm at the end of the race, basically matching him over the final six laps.

Get him and Mookie off the gate together and we could have a real battle—like they did in Daytona.

If you’re looking for a thorough breakdown of the crazy 250SX East Region, check out Jason Thomas’ Breakdown column from earlier today.

In their post race press release, Monster Energy/Pro Circuit Kawasaki said “further details to come,” in regards to Arnaud Tonus’ shoulder injury sustained in Detroit. Tonus was leading the 250SX main event briefly before being passed by Malcolm Stewart. Then he went down in the whoops. This is just the latest in a long list of setbacks since Tonus came over from the FIM World Motocross Championship last year. We’ll have more information once it becomes available.

Martin Davalos was back after missing Toronto due to visa issues. The former points leader got caught up in the first turn crash that claimed the current points leader Jeremy Martin, Tyler Bowers and others. Davalos came back to fifth. “I felt like I rode with a lot of heart,” he said in a statement, “but I was still a little disappointed. I didn’t get good starts. I couldn’t find traction and, unfortunately, it got me caught up in the back of the pack. I fought my way back through the pack and got up to around fourth, but then got caught up with a rider and crashed and was put back to almost last. I was able to fight back to fifth, though. This definitely isn’t over yet.” Davalos was down 20 points in the series coming into the race, and leaves Detroit down 19 despite the fifth-place finish.

GEICO Honda’s RJ Hampshire was also part of the crash and came back to seventh. “Had a really good jump [off the start] and was up front coming into the first turn, I had the inside and someone came into me which stood me up and shot me right, hit a couple more people and went down,” he said in a team statement. “Was back in like twenty first and just put my head down tried to pick off as many as I could. Got sketchy in the whoops numerous times. Seventh is not cutting it. I'll build during this break and come out for the last five races ready to play.”

Team MicroBilt/PRBC Suzuki’s Vicki Golden left practice and did not return due to an illness. Golden wrote on Instagram that she will be back after the break. “Had some medical issues that sidelined me from practice today. I tried but you can't win them all. We have a nice break from the series to get healthy and get back at it!”

Tyler Beremen had a scary crash in practice and was taken to the emergency room with a neck injury. He indicated on Instagram that he should make a full recovery. “Took a good one to my head and neck in qualifying Saturday.. I am thankful to have had a@shoeihelmetsusa brain bucket protecting my dome piece.. I got lucky to say the least to only be walking away bruised and batter with a sprained neck.”

According to the team’s Instagram account, Benny Bloss had “bike issues” while running in seventh. Bloss, who is filling-in for Luke Renzland, had a season-high seventh last week.

BLUE Buffalo/Slater Skins Yamaha’s Josh Cartwright separated his shoulder in practice and missed the remainder of the night.

TLD/Red Bull KTM rookie Alex Frye, after a fourth last week, had two crashes, the last which ended his night.