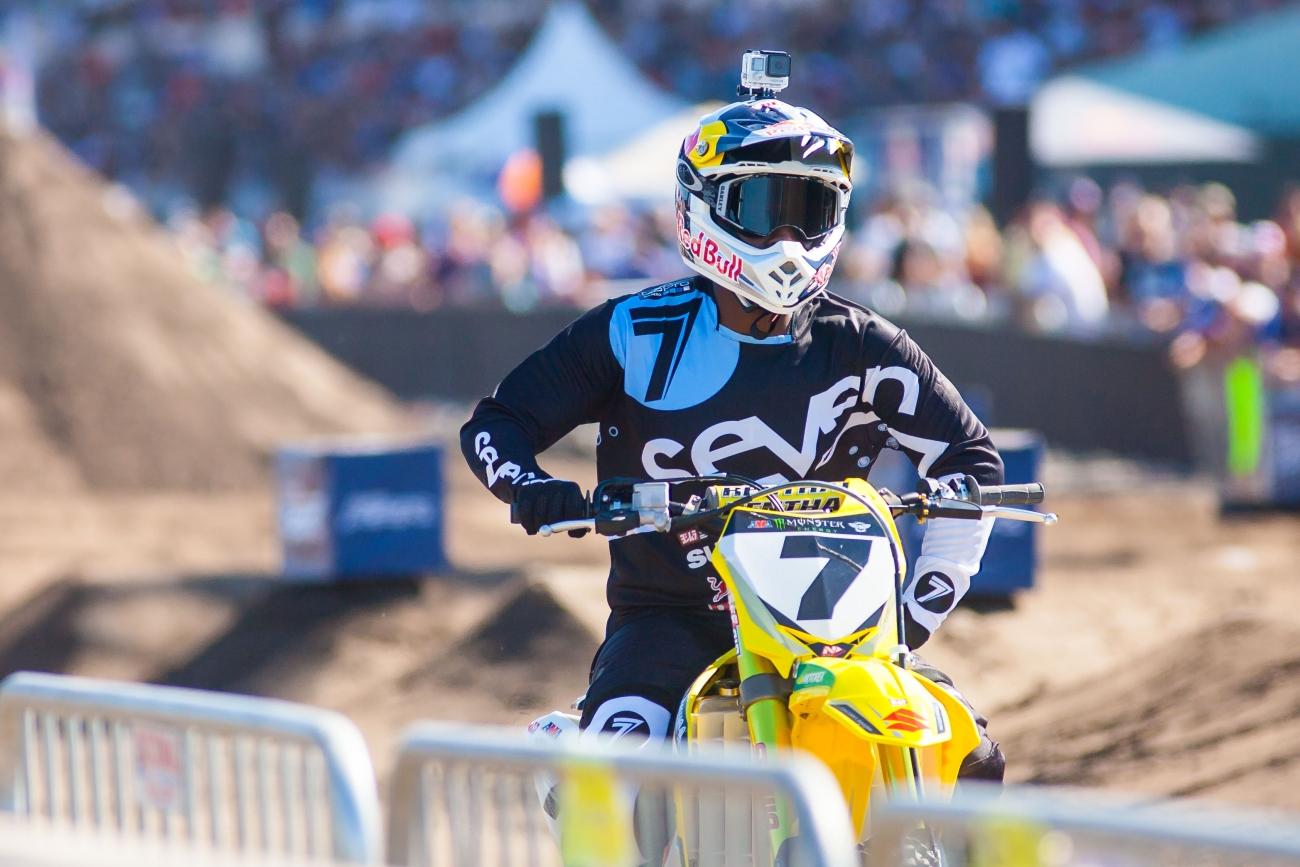 It's only a coincidence that the 2014 Red Bull Straight Rhythm was James Stewart's last race before being removed from racing due to a suspension, and the 2015 edition was his first race back from it. Conspiracy theories will abound since Stewart has long been a Red Bull athlete, but last year's October event date was set long before anyone knew the suspension was coming, and when that race ended, no one realized it would be his last for a year.

James and Yoshimura Suzuki left RBSR planning to race the Monster Energy Cup, and everyone assumed a 2015 penalty would be a fine or short suspension. An entire year seemed unlikely.

Straight Rhythm's pre-planned October date fit around the penalty period perfectly, and James got to race it both times. He also won them both. But the genesis of this event had nothing to do with James Stewart. In fact, I've heard the vision came from the 2013 Daytona Supercross, where Weston Peick and Bobby Kiniry drag raced to the finish in the last-chance qualifier, scrubbing the crap out of every jump in a furious fight for the final transfer spot. Look closely and you'll see the resemblance.

But a straight track with a premium on scrubs and whoops certainly seems tailor made for Stewart, and that only amped up the pressure this time. He had a year off, but he was still expected to win (he dominated the voting on this website last week, and when Red Bull asked fans to fill out fantasy brackets on Friday night, 71 percent of the people who predicted a Roczen/Stewart final picked Stewart to win).

"Coming in with the target on my back, but having not raced in a year, it's kind of weird," he said during the pre-race show.

James' expectations for himself weren’t quite so high. He could have built a Straight Rhythm track at his house and hammered it all summer, but he didn't, realizing that preparing exclusively for this event would have only made for a hollow victory. "I think the difference is that everybody thinks we've [James and his brother, Malcolm] both been preparing for this," he said after the race. "I knew how long the supercross season and motocross season is, and the last thing I want to do is come out here and try to prove that I'm better than everybody just by busting my behind for the months leading up to this."

You could tell it didn't hit him until it was over, when he finally realized that fans would still cheer for him, and he could still to ride to his ability.

James didn't look very prepared when I saw him on Friday. This wasn't the lean, ripped, trained-to-the-max-looking-to-kick-everyone's-ass James Stewart we theorized we'd see. Maybe that James shows up at Anaheim 1. At this event, well, he looked like a guy who had just had a year off.

I believe that pressure was real for him on Friday. You'd think he'd be relieved returning to competition after a year off, but he didn't look relieved at all. A camera crew was in his face all day, shadowing his every move, but I didn't see his trademark smile. He looked serious and uncomfortable. How were people going to react? How was he going to ride? So much was unknown, and you could tell he wasn't sure how to process it all. Finally, on Friday night, he came to grips with the fact that he might not win, and told himself to focus on the bigger picture of using the event to get ready for January.

This year's win came only on instinct, and it's the instinct that only James Stewart has, even after missing a year of racing. He simply went through the whoops wide open, with zero fear of the consequences. So fearless was James, as per usual, that he leaned forward in the whoops, trying to generate every last ounce of forward momentum. This is the same formula that has powered him to countless victories, incredible feats, and also hard crashes. Forward might be fast, but it means you're going over the bars hard if a wheel goes wrong—RJ Hampshire laid himself out badly in those whoops, and he wasn't even trying to do it like James was.

"I don't understand how he does that," said Lites Class rider Michael Leib, standing along the fence line, watching Stewart.

A few ex-pros who have raced against James felt the same way:

@DavidVuillemin lol!!! Think he ever wonders what might happen when he's wide open going in to them ?

@DavidVuillemin doesn't look he does.. Just send it wfo, whatever happens happens lol

@DavidVuillemin yea!!! That was the last time I took the approach of, "I'm just gonna hit them tapped and hope for the best".

In practice on Friday, James ripped the whoops a few times, but also swapped a few times more. The team made some bike adjustments and he ripped the whoops even harder on Saturday. Ryan Dungey and Ken Roczen are world-class riders, but even they didn't accelerate with the same fury leading up to the whoops on Saturday. James wanted to send it into the whoops so hard that he ended up jumping over the dragon’s back jump that led into them. He wasn’t going to let some pesky obstacle slow down his pinned blitz across the top.

Finally, after it had ended and he'd won, James smiled and was overcome with emotion. You could tell it didn't hit him until it was over, when he finally realized that fans would still cheer for him, and he could still to ride to his ability. This race wasn't as tailor made for James Stewart as it looked, and his win wasn't as assured as it seemed. But when it was over, it all looked like it was supposed to happen this way.