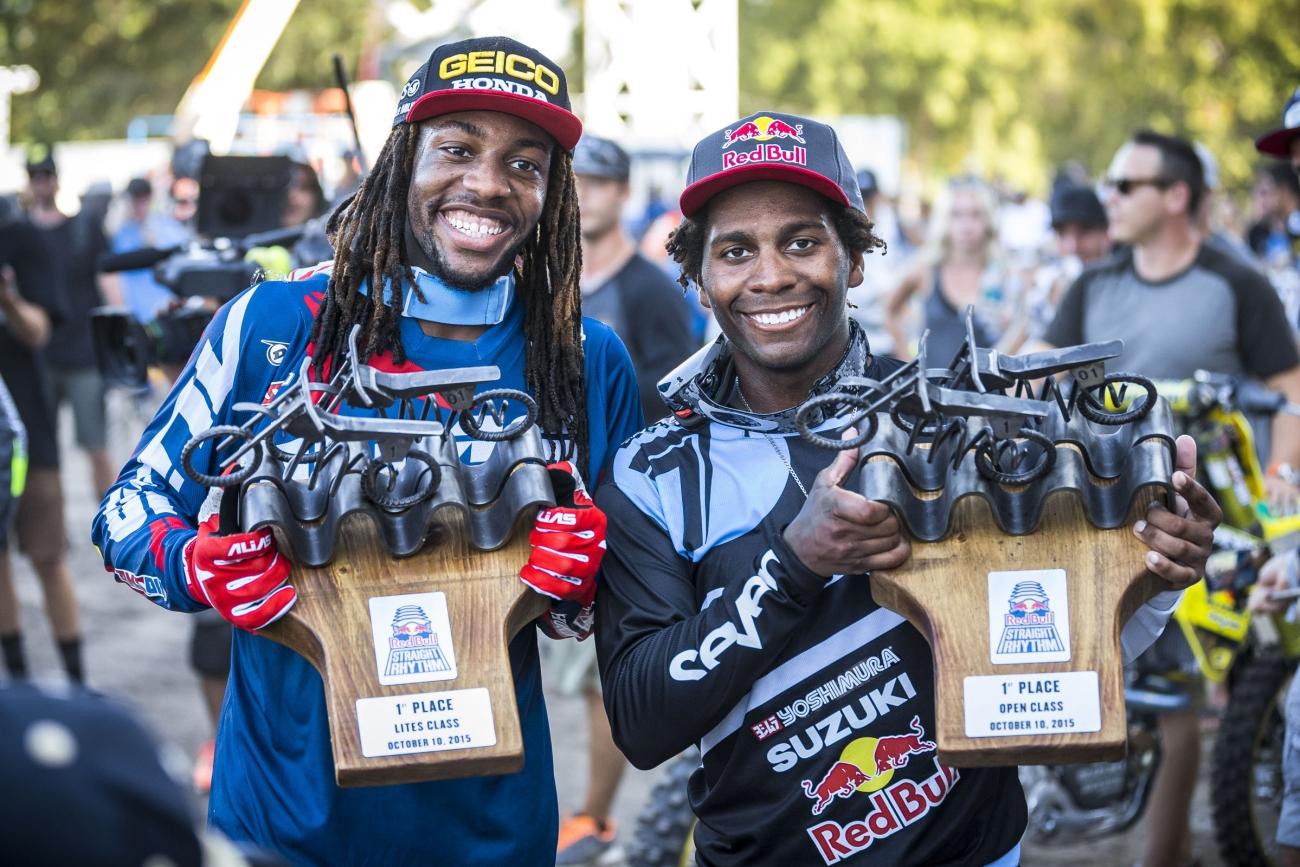 Yoshimura Suzuki's James Stewart had not raced in one year after winning last year's Red Bull Straight Rhythm (he was suspended from racing in 2015 for sixteen months after failing an FIM anti-doping test). GEICO Honda's Malcolm Stewart didn't race this summer's Lucas Oil Pro Motocross Championship and had not raced since the Las Vegas Supercross in May. In their returns, they swept the 2015 Red Bull Straight Rhythm, with James taking the Open Class and Malcolm topping the Lites.

We found both hanging out in the Suzuki truck and talked about the big day.

Racer X: Welcome back to racing. Forget about the result, James; what did it feel like to be a racer again?
James Stewart: It felt good. It really kind of hit me the first run. When I went over the tabletop—actually, when I went in the whoops, I could hear the crowd going. It was kind of like, "Hey, welcome back." That felt great. So to win that one was cool to me. It's the first time I've won something since last time I was here. I've been on the couch watching these guys win races—[Ryan] Dungey and Ken [Roczen] and all those guys. You start dreaming of this day, like, I don't care what we do; I just want to race against those guys and win something. It felt great. I felt like I had a great welcome back. I couldn't really do any better than that.

Last year I think you were the favorite, but how different was it this time? When you came here this morning, did you think, I can win this? Or did you almost surprise yourself a little bit? Did you have any idea where you would fit in against Dungey, Roczen, Brayton, all these guys, having not raced in a year?
James: It's a lot of things. People call me a speed demon—I jump things, I scrub things. But yesterday [in practice and qualifying], I felt like I didn't have it. I had it, but I didn't have it. So I told myself when I went home last night, I said, "James, it's a process. It's a process.” My main goal is to win a supercross title, so I need to use this as preparation to get here. When I came here I knew, no matter what, even if we’re just racing around two barrels, these guys want to win. Especially the last thing they want me to to do is have me come back [in my] first race, we race each other, and I'm close or win against them. So I felt like that yesterday. They [Roczen and Dungey] were riding really good, pretty quick, a lot quicker than me. So just go home and then come up and have that race craft, just get faster. Who I race against, I just up the pace and kept upping the pace and upping the pace, and then when I lost to Dungey to have that rebound to say, you know what, I'm going to go after it again. That part, you don't get that from practicing. You don't get that from being on the couch. And I've been doing both for the last year. So it's cool to see I still have it.

Take us through that race with Dungey. The first time, he got you in the tables and the rollers before the finish.
James: Yeah, I had it and I had got the rhythm section. My thing was to get through the rhythm section. I felt like I was pretty good in the whoops and dragon's back. So I got through that, and then it was a little slippery on that tabletop, and I spun a little bit and cased the on-off. And then I went to the moon [really high off the jump], and he scrubbed that thing and went underneath me. Once I started bouncing those rollers, he was manualing and whatnot, and he got me. So it was the first time I lost here, but it was cool. I went back and saw this guy [Malcolm] winning races, and thinking that he was going to get to the Lites final, I knew I needed to step up. He [Malcolm] came over and told me, "Stop messing around. You got to get this. You've got to win this thing." So we went out and did it. It's nice.

Malcolm, wire to wire this weekend. Fastest in qualifying, fastest day. How's it feel to get the win?
Malcolm Stewart: It feels great to finally get the win. I ain't going to lie: this morning I woke up and I was like, I don't know if I can do it. I didn't have that much confidence! After I finally got that first run over with, I think it was just all the butterflies in my stomach. I got through first round and got that over with. I was more nervous to race against Jordon Smith, because last year I watched him, and when it came to the semifinals, he pulled something out. So it was a close race with me and him. After I knocked him out it was me and Shane [McElrath]. So I felt good all the way through. As long as I couldn't see him in my peripheral I was fine. But I kept giving up a little bit right before the finish line those table-tables. All I know is just like what James said—just focus through the rhythm section. I knew I was faster than everybody through the whoops, and I knew if I got the whoops clean, they can't catch me after that. So that was the main thing I was focused on. I'm glad. Like I said, for James to come back off the couch to go and win. And me as well, I haven't raced outdoors, so it's been like six months for me. So it's a blessing in disguise. Definitely Mom and Dad can't be any more happy for us—we both won!

James, this morning I mentioned you both trying to win together, and you said you hadn’t actually thought about that.
James: For sure. I think the difference is that everybody thinks we've both been preparing for this. I knew how long the supercross season and motocross season is, and the last thing I want to do is come out here and try to prove that I'm better than everybody just by busting my behind for the months leading up to this. So I haven't. I've just been testing and riding a little bit here and there. Obviously it's nice to come out here and win and stuff like that, but that's why I was kind of like, if we were going to Anaheim, I would say, "Yeah, if we [Malcolm and I] both do our jobs, we'll win." But I haven't done the work [for this race] to come here and say I can win besides making sure my motorcycle's better and all that. Like I said, it's cool to do it. We've got next weekend to use that as a preparation, and we've got Bercy and Australia for some more, and then we get to Anaheim. I know we'll both be fired up by then. It might sound a little bit different coming out of our mouths when we're talking about going racing in January, when we're ready to go.

You're both racing Lille [Bercy] so you can win together again?
James: I don't know if we both could win. Malcolm, you're riding a 450, huh? Like Mom says, a Stewart's going to win.

No Mom and Dad here though, huh?
James: No, it's an anniversary. I hate to say it, but Pops said watching this thing is like watching paint dry. I think it was because he [Malcolm] didn't win last year. I think if he had won last year, it would be different. But it was their anniversary, and my mom…. It's an important one for them. They'll be there next weekend.

Malcolm: They're on punishment right now. We're not buying them plane tickets, hotels, nothing!

James: [Laughs] We're going to tell them that we both won when they weren't here, so maybe they need to stay home!

James, it seemed like you were a little emotional after it, talking about the support from your team and the fans and all that. That all kind of sunk in a little bit.
James: Yeah. I don't know if any rider's been through what I have in the sport in the last year. It was emotional. All year, it's, are we racing? We're not racing, we're racing again, we're not racing…. And to have my team and the fans really show the support they have for me, that was cool. I kind of got emotional, and then with him [Malcolm] winning, and like I said, not really expecting to win, to come out here and do this, it's an emotional thing. So after I won that first race I was kind of emotional inside of my helmet to say, all right, I'm back. I won. I did something. So when we finally finished it, it was an emotional deal. I know that I'm going to get a lot better, mentally and physically. I went through a lot in the last year. I got through it and I've come back, and first race we come out here we perform and that's nice. So we just got to keep going.

One section you seemed to really do well, the last dragon's back, and then the whoops. That seemed to be your edge over Dungey and maybe even over Kenny a little bit. Talk about that section.
James: I just felt like I could have went faster here and there. They were faster in sections, and I had to go faster somewhere else. Those tabletops, they were just so steep. If you made a mistake, you were done. So I knew, just don't make a mistake there and then you can catch [up somewhere else]. Because I think a couple races I raced with Dungey he was actually ahead of me, and then once we got past that point [the first set of tabletops], it was, all right, let's go. And then the whoops, it really came down to you still got it. You can go in as fast as you want. It was cool to see that I still had not lost that part. So it was just good. A lot of positives. The biggest positive is to know that I'm going to get a lot better.

Malcolm, how fun is this event? Is it cool?
Malcolm: Red Bull Straight Rhythm is awesome. It makes you nervous—I can tell you that! Especially being one on one, because there's really no excuse why you should lose. If you lose, it's like, I straight up lost.

You can’t say you got a bad start or something.
Malcolm: [Laughs] You can't say you got a bad start. It's gated. There's no excuse. This is basically one of those events where it's kind of who can throw it down the hardest and who's willing to take that chance. A good thing is me and James both took that chance today, and that's why we both went 1-1. So I can say that I'm excited to kind of get back racing. We finally kind of dusted off a little bit, got a win, and now we've got many more overseas races as well and then Anaheim 1. It feels a lot better racing and winning than not doing anything and sitting on the couch.