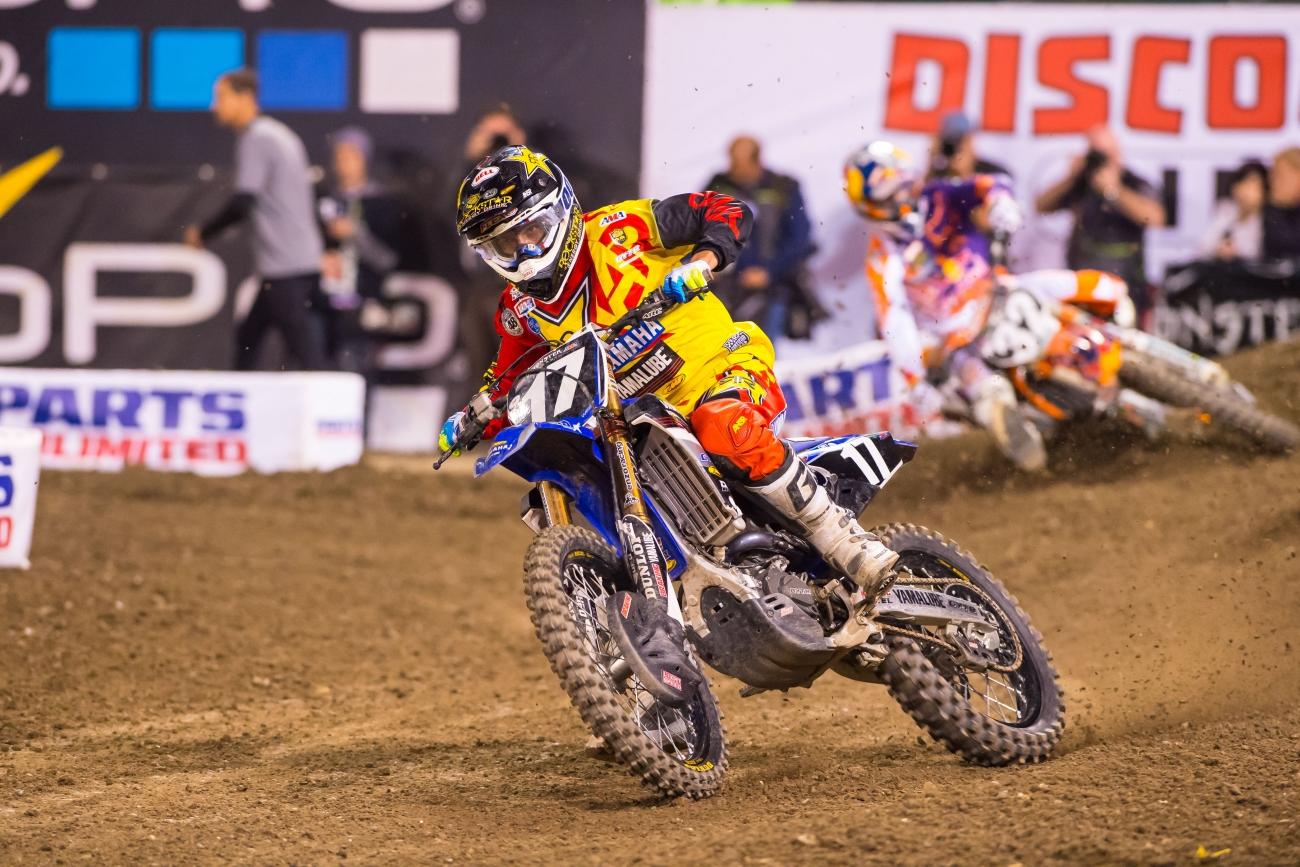 3 on 3 Rights and Wrongs

We’ve all gotten in trouble for a bold prediction gone wrong, but that doesn’t stop us from trying again. Why? Well, there are few things as satisfying as predicting something will happen and then actually seeing it happen. Called it!

Yesterday we ran through the year of Online Poll voting on the site to see what you readers thought would happen in 2015. Now we’re putting the screws to our own staffers, Steve Matthes, Jason Thomas, and Jason Weigandt.

1. Name a bold prediction you made before the season that actually worked out.

Jason Weigandt: I wasn't very smart this year with the predicting. That's just like any other year. I figured Marvin Musquin would dominate 250SX east, but plenty of people predicted that. I also study the rookie thing pretty closely. In 2014, I predicted the Ken Roczen/Eli Tomac rookie tandem would produce two wins, and they did (Roczen got both of them). I predicted the 2015 rookie class (Dean Wilson, Cole Seely, Blake Baggett, Jason Anderson) would produce one win, and they did thanks to Seely. Perhaps my best move was expecting big things from Alex Martin in 250MX; he delivered.

Jason Thomas: My biggest success story in the prediction department would have to be Ryan Dungey. There were so many opinions on "Who's next?" and I really thought that Dungey would fill that role fairly easily. He had clearly been the man waiting in the wings with Ryan Villopoto's departure. He had all of the pieces in place and had always been so rock solid on a championship level. I felt that teaming up with Aldon Baker would be a huge advantage this season, and it turned out to be exactly that. Also, KTM presented Ryan with a new bike that he seemed to really agree with. I didn't see the setup struggles that had plagued him over the past few years, at least not as commonly, anyway. Everything in his life seemed to be in unison, as Roger DeCoster alluded to many times this year. This was the best Ryan Dungey we have seen, and I see no reason to think that won't continue into 2016. I should also point out that I predicted a dominant East Coast run by Marvin Musquin, and that's precisely what we got. I actually thought he might sweep the series, and he wasn't far from doing it.

Steve Matthes: Let's face it—there are a ton of things I say on podcast shows and write that never come true. But every once in a while, like a broken clock, I get things right. That happened during the filming of our Racer X SX Preview videos, when I made mention that I didn't think Davi Millsaps would win any races this year and also said that I thought he would miss some races. And I was right on the wins, as I thought the time off was going to hurt him. Now I didn't think he’d miss races because Kawasaki would fire him, but technically, he still missed races, so I was right!

The second thing I got right was picking Cooper Webb for the 250SX title, which I predicted twice: once before the season and then after round one, where he finished seventh. I watched this kid rip through the pack to get that seventh and could tell he had "it." I think I just kept yelling, "You watch!" on our podcasts about Webb winning. Soon that’s what he did.

2. Name a bold prediction you made before the season that didn't work out at all.

Weigandt: Oh, man, I didn't make this one before the season, but it's close enough. After Ken Roczen won Anaheim 1 and Eli Tomac won Phoenix, I tried to make #KenEli a thing so badly that I wrote an entire column about it. At the first two races, we didn't see anything from Ryan Dungey to indicate he'd soon go into beast mode. Turns out Ryan was sick coming into Anaheim 1 and wasn't really 100 percent until round three, where he looked much faster and even cut into Kenny's lead a little bit. Soon he had the point lead, wins, titles…. #KenEli is not a thing yet. I also predicted Justin Hill would win 250SX West. Maybe next year?

Thomas: I thought that Chad Reed would come into the season more prepared than we saw in 2014. I was around to see his work in the off-season and witnessed just how much effort he put in to make a championship run. He looked to be much further ahead of the game than a year prior, and we saw him winning races early and right in the hunt before his brutal San Diego crash. Everything seemed to be in place for him to enter 2015 at full bore—but that didn't seem to happen.

Chad struggled early in the season with bad starts and an inability to move through the very talented top ten riders. He just seemed to lack the early fire he had in 2014. He did end up finding that pace, albeit a month or two later than he would have liked. His Atlanta win was impressive, holding Ryan Dungey at bay for all twenty laps and bringing the crowd to their feet. Had he not fallen the following weekend, he had a real chance at back-to-back wins in the ATL. Still, though, 2015 was not the year Reed was looking for and not what I expected either. He still won a race and that shouldn't be overlooked, but I thought he would be in the title fight and that didn't pan out this year.

Matthes: Kenny Roczen—that's what I got wrong. I thought that the #94 would win both titles this year, his first on RCH. Yeah, he looked great at the first supercrosses, but we know what happened next. I picked Ryan Dungey to win the 450MX title at the start of the outdoors, but by then we knew about Ken's ankle injury from supercross. I had no idea Roczen would ride as poorly as he did for 80 percent of the outdoor season, though. I still think this kid's the future champion, but this stuff with his team, bike, and now the injuries leaves me a little more uncertain that I once was.

Weigandt: I thought Blake Baggett would be really good outdoors, and he was, but I predicted he'd be up front and fighting for the win in a moto or two. That didn't happen. I never wavered from Jeremy Martin as my 2016 250MX title pick—Marvin made it waayyyyy close­—but that bike problem at the last round prevented us from seeing the showdown we wanted. I thought the Christophe Pourcel/Rockstar thing had a good chance of working, and it did. In general, I'm sure I was wrong about a lot more than I was right about.

Thomas: I thought Davi Millsaps would be better in 2015 than we saw. Coming off his Monster Energy Cup win, I expected a lot from Davi. With his ability and the team’s previous four supercross titles, it seemed like a good combination for podiums and even race wins. Alas, it was not to be. Davi caught a virus just after the Monster Cup, derailing his training efforts in the crucial months of November and December. To make matters worse, he had a small injury just before the season began that nagged him in the first few rounds. He didn't talk about it much, but I know the issues leading into the season really left him behind where he hoped to be. It was a far cry from the fit and fast Davi we last saw in 2013. We all know how his stint with Monster Energy Kawasaki turned out, but now he has the chance to turn the page. He will once again be on factory equipment in 2016, aboard the same bike as the defending champion. I was wrong about how 2015 would go for Millsaps, but maybe, just maybe, I was a year premature.

Matthes: I've been saying on my show for a long time now that James Stewart's going to win this upcoming Monster Energy Cup. You can stamp that. JS7 is coming off a long layoff with a lot to prove, he's almost won this race before, and he's James Stewart—he has a flair for these things. So there's one for you. You can tell your buddies this, and when it comes true, thank me.

Oh, wait, another one I missed out on was Tim Ferry dominating the Legends and Heroes race. That didn't quite work out like I thought. Since this is fun, I believe I correctly predicted Chad Reed would win a race this year, but I also predicted that Dean Wilson would be the top rookie in the 450SX Class. At least I think I did. I do so many shows and write so much stuff throughout the year that I can’t remember what I said half the time.