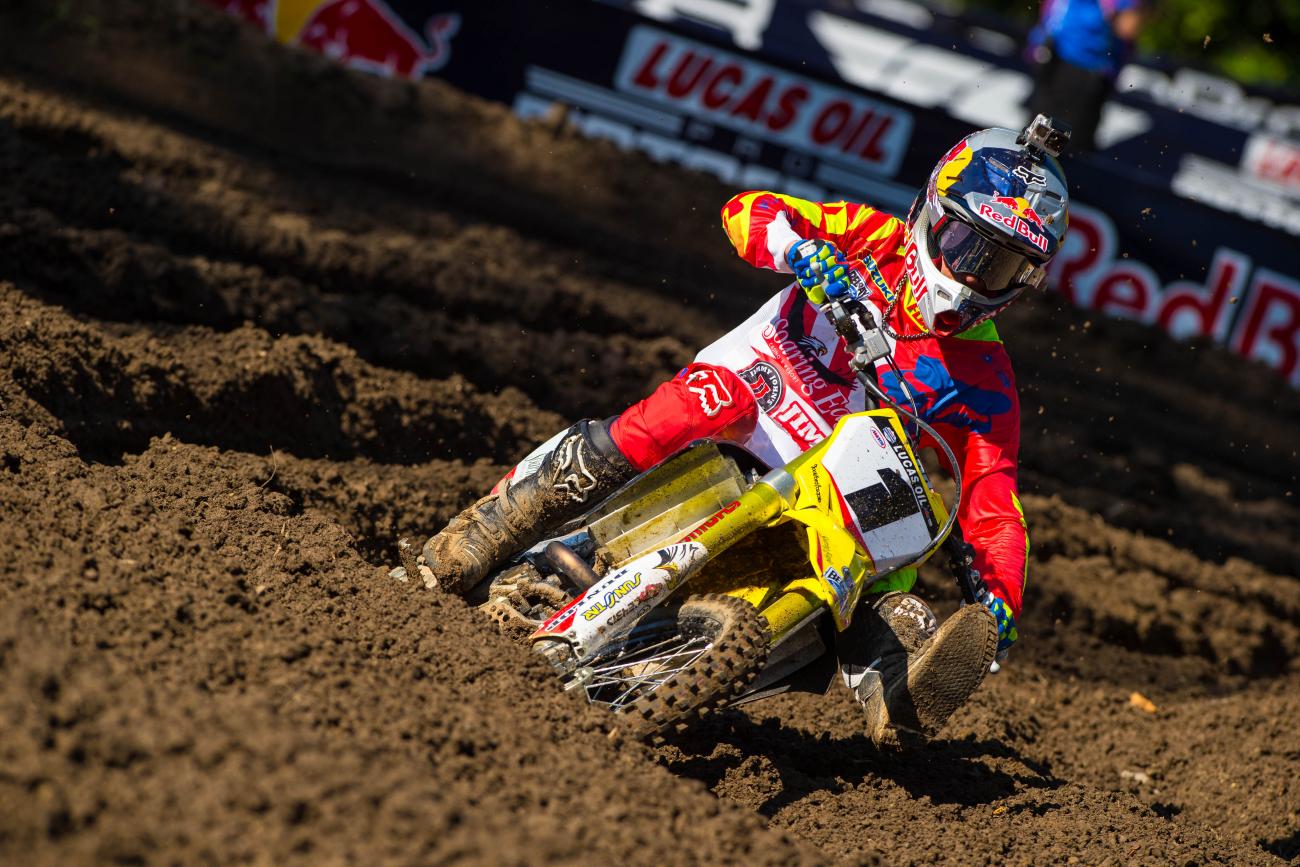 You were probably expecting all sorts of drama under the Soaring Eagle/Jimmy John’s RCH Suzuki tent this weekend. A few days prior, Ken Roczen’s dad lit the team up in an interview with the German motocross magazine Cross. Ken moved in front of the story, calling us to explain his dad doesn’t speak for him. But that was just to quiet fans. How would the team react when Ken got to the race? At Indiana, owners Carey Hart and Ricky Carmichael would both be on hand. How would everyone focus through the distraction?

Well, um, what distraction? Ken didn’t seem bothered by anything, nor did anyone else under the RCH tent. I saw Ken on Friday and we started talking about other things, as if the magazine interview with his dad had happened months ago. On the starting line, he told NBC pit reporter Georgia Lindsay, “I don’t let things like that bother me too much. It was a weird week, but we’re out here racing and I have my race face on. I’m ready to go.”

Kenny meant it. He won the second moto, his first moto victory since High Point in June, and just his third moto win all summer (wow, seems crazy to read that, right?)

It seems impossible the dad-versus-employer gossip, spilled into the public, with the backdrop of a disappointing season, didn’t create huge waves at RCH. Many expected to see scorched earth in the RCH pit and theorized that Ken would have to quit or be fired. Instead, things seemed better than ever.

There are some experienced hands over at RCH, and I’m sure this isn’t the first “someone is mad about the bike” rodeo for any of them. Further, while Ken’s dad certainly broke some ground by bringing behind-the-scenes stuff to the front, it wasn’t unexpected. I’ve heard Heiko had some run-ins with the KTM brass as well, and I’ve heard plenty this season about friction between him and the RCH team. Most of the stuff in the interview was probably stuff the team people had already heard directly from him before.

We outsiders don’t deal with this type of family/workplace drama very often, but it’s forever been a part of this sport, and it always will be. It was routine enough for everyone involved. Ken “put on his race face” and then rode his much-improved bike very well on a very rough track. The only way racers can race is by shutting off the negative noise around them. Ken and his crew did a superb job this weekend.

I was worried about this Legends’ Race. Obviously, watching Ricky Carmichael, Jeff Stanton, Jeff Emig, Kevin Windham, Tim Ferry, Guy Cooper, and others ride dirt bikes is great, but I was really afraid of how it might look. For one, what if the dudes were slow? We all believe in our heroes, and when you see “Six-Time” Stanton on Instagram working on bikes, tending to the farm, or running a triathlon, you want to believe he’s still got it. But the man is 47 and hasn’t raced professionally since 1994 (OMG, Stanton’s heyday was nearly twenty-five years ago?). What if he just doesn’t look good anymore? Worse, what if one of these heroes had grown into, gulp, a goon?

I grew up a New York Yankees fan and Dad would sit me down for Old Timers Day every year (on TV. We were never paying for tickets, people). These were 70-year-old men with not a hint of “this guy used to be a professional athlete” in them. The ovations were cool, but the only ones who could bring it when the game started were the guys just barely intro retirement.

I knew Windham, for example, would still look good. But I was worried about others. Plus, this race only came together three weeks ago. Contrary to rumors, these dudes don’t ride much anymore. Ferry might coach dudes like RJ Hampshire and Trey Canard, and his kid might be an up-and-comer at Loretta’s on a 65, but he barely rides. He told me he has the same tire, sprocket, and chain on his bike he’s had all year because he doesn’t ride enough to wear anything out.

Okay, so there was a risk of rust and some tarnish. But this could go the other way, too. What if the legends were too fast and too competitive, and rode too hard? What if someone got hurt?

So the event was bookended by two real threats—that the guys don’t take it seriously anymore and would look slow, or take it too seriously and crash. That all ended as soon as practice began, and Guy freaking “Airtime” Cooper launched 100-some feet to the top of the uphill triple. He made it look easy. Cooper’s time was up before this sport really started growing (his last full year was 1993, the same year Jeremy McGrath moved to the 250s, won a title, and kicked off explosive growth). Kids might have heard of Stanton, Emig, or Ferry, and they probably watched Windham and Carmichael. But Cooper? To understand him, you had to be there. He’s the 1990 125 National Champion, but his greatness is not connected to results. Cooper is famous for being crazy, for turning small bumps into huge jumps, and huge jumps into legends. At 53 years old, he did it again in Indiana.

Looking around during Saturday’s practice, they all had it. Emig and Ferry looked fast, and their styles hadn’t changed one bit. Stanton dropped the hammer on a practice start, banging gears wide-open on his Honda 450 and carrying a wheelie through the first turn. There were deep ruts halfway down the start straight, formed by the turn after the mechanics’ area. Stanton maintained a perfect wheelie, perfect traction, and a perfect drive, under power, even going over those ruts. In the distance, Emig, now 44, launched the big triple. If someone with no knowledge about the sport watched that practice, he’d not even blink watching it. He wouldn’t even realize these were retired ex-pros because they still looked fast. They still looked like current pros. There wouldn’t be any “Wait, what’s up with these guys?”

Then they raced and no one got hurt. I feared the worst, but even with zero prep time these guys still had it. They’re racers—always have been and always will be.

It’s a normal reaction from us normal people. Another championship was going down to the wire, and we had a week to overthink, over plan, and over bench-race. Team tactics were a big topic. Yamalube/Star Racing Yamaha had both Cooper Webb and Aaron Plessinger going fast lately, and Jeremy’s brother Alex, a Yamaha rider with team CycleTrader.com/Rock River, is no slouch. Cooper moved over for Jeremy at Utah and the earth shook a little. How would they work it at Indiana?

There really wasn’t much work at all. Webb took off in the first moto and never looked back. Musquin went out with a DNF, so a Martin moto win would have sealed the title. All that stood between him was Webb and an eleven-second deficit. Webb kept winning, and then Jeremy was actually caught by Plessinger, who later passed him. KTM’s Jessy Nelson got into the mix, too, but he didn’t try anything crazy with Jeremy; he just went around.

Had Marvin been in the mix, things might have gotten crazier, but once the situation gets complex, team tactics don’t work. Webb’s mission in Utah was easy, because he had just passed Musquin and saw Martin coming, so he could make a very easy mid-race calculation. Indiana’s scenario was much more complicated. It’s hard to communicate much to the riders when you only have a pit board. These days a lot of them don’t even read it, and messages would have to be incredibly short and accurate even if they did. We can’t even get Twitter right half the time, and we’ve got 140 characters to work it.

So while we can plan conspiracy theories on the sidelines, teams can’t actually relay such plans. They don’t like to do it, either. Riders aren’t robots, assembly line workers, or calculators. They’re racers and they usually just go out and race. That’s what they do.

The motorsports world was rocked this week when IndyCar driver Justin Wilson died due to injuries suffered in a crash at Pocono Raceway in Pennsylvania over the weekend. As is usually, sadly, the case in these scenarios, the victim was one of the nicest, most well-respected and loved personalities in his sport. The Indy paddock said the same thing when Dan Wheldon died in a 2011 crash in Las Vegas. When the IndyCar drivers formed a driver’s council, they put Wilson at the helm, because he was respected by all.

The losses of Wheldon and Wilson are huge blows for not just IndyCar, but for all motorsports, and the outpouring support from well outside the IndyCar world speaks volumes. But as sad as it is, as much as Wilson will be missed, some of his closest friends and competitors had to return to one message.

On Tuesday, veteran Helio Castronevas went on NBCSN to speak emotionally of his lost friend. But then he addressed the fear of driving a racecar: “You never think about the negative part; you just think about how good you can be and how to achieve your goals.”

Then came a tweet from veteran driver Tony Kanaan: “Why do we do this? Because we love it, don't want to be anywhere else but a race car. We will keep your legacy my friend. Racers race.”

The rest of us will never quite understand.