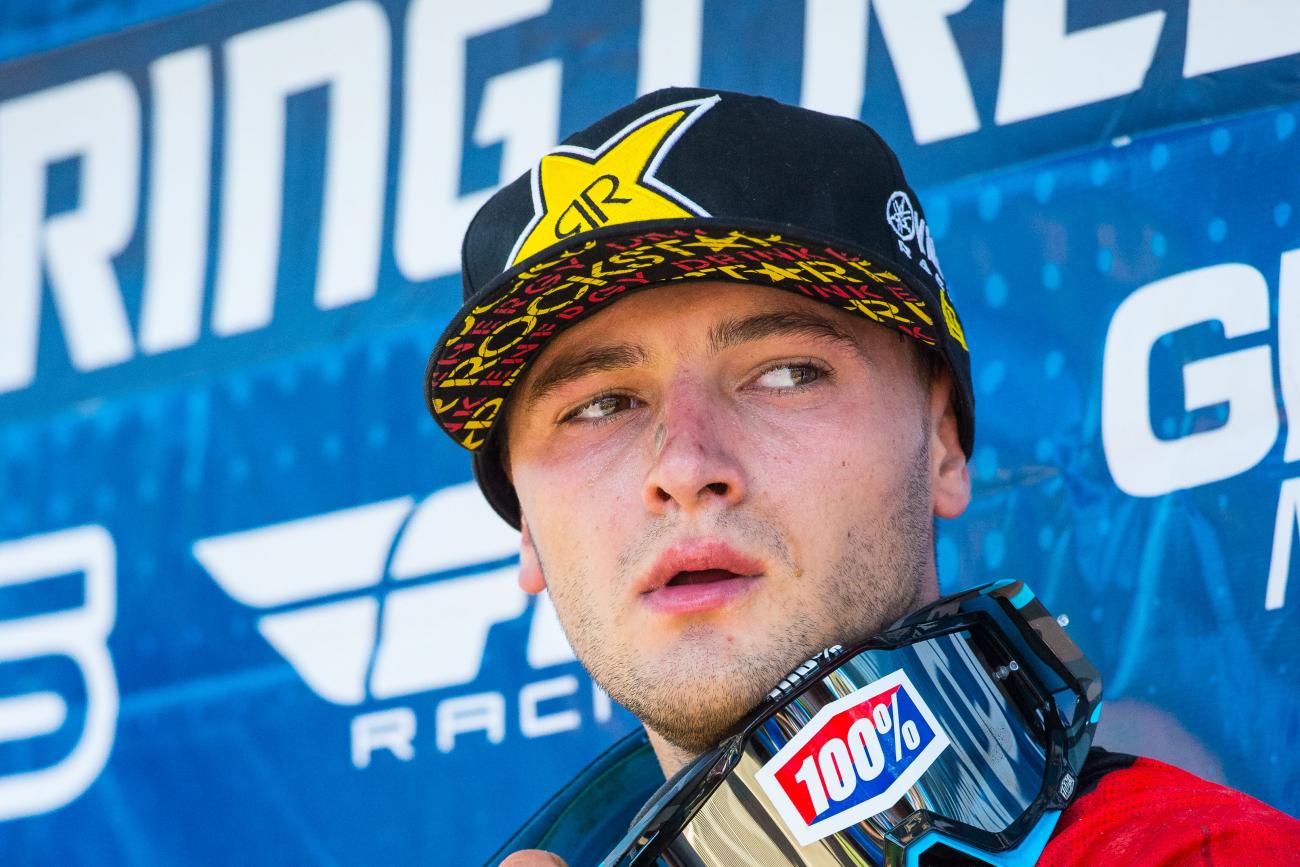 3 on 3 Questions after Ironman

1. If you ran Yamalube/Star Racing Yamaha, would you have tried to slow Cooper Webb and Aaron Plessinger to let Jeremy Martin clinch the title in moto one?

Steve Matthes: I think I would've. We know that Jessy Nelson coming up from the back and nipping Martin kind of ruined everything (including a sweet 1-2-3 Yamaha finish), but seeing Plessinger just passing and leaving Martin behind was weird. Everyone knew Marvin Musquin was out, but we also knew that Marvin is very capable of winning a moto, and with Martin's fourth in the first moto, the team still needed Martin to finish around fourteenth to clinch. And we saw Martin crash in the second moto—what if he had broken his throttle in the crash and DNF’d? And maybe Marvin wins. Yeah, lots of ifs and buts in there, but I would've done everything possible to secure the title in that first moto.

Jason Thomas: If—and this is a big if because it didn't go this way—Jessy Nelson hadn't come up and broken up the Yamaha sweep, I would have certainly made an effort to clinch the championship right there. Titles are too difficult to win and any opportunity to remove chance from the equation has to be considered. It may have been tough to communicate to Webb and Plessinger, but I would have given it a shot.

Jason Weigandt: No way. The Utah situation was one thing, as Cooper Webb was right in front of Jeremy, and Jeremy was going faster, anyway. Here, Webb had over an eleven-second lead once Martin got into second, which would have required much more blatant slowing down and moving over. Also, we take pit-board signals for granted, riders don't even read or understand them half the time. It would have been hard to orchestrate, and at what cost? Remember, brands go racing as a marketing exercise. You can only cheapen the experience so much before the blowback outweighs the actual gain of winning a title. Yamaha folks have to make sure they win on merit, because they go racing to prove they have the best riders and equipment, not the best team tactics.

About now is the time when someone will say, "But what about Yamaha pulling that "Let Brock Bye" pit board years ago?" Well, if the best reference of team tactics is something that happened one time forty years ago, I think that's proof that teams usually let their guys race it out.

2. What was the biggest "Holy crap, J-Mart just pulled that out against all odds" moment this season? There are so Many to choose from here.

Matthes: He wasn't always the fastest rider, but I really believe he was in the best shape. The guy was an animal out there, so to me, his Glen Helen ride was the best, where he joined the pack about ten seconds down from the last-place guy and then to made it all the way to fifth. And really, watching him pass and catch guys was remarkable; he was wearing dudes out. He was tenth with five laps to go and knocked off the five guys in the last five laps. He just kept pounding away, eating sand and dealing with a gnarly track. It was truly an impressive ride.

JT: I would say the biggest crisis aversion was at Glen Helen, as Matthes alluded to. He narrowly avoided a disaster there and somehow salvaged 16 points. It was about as close as you can get to a DNF, and probably had the always-calm J-Mart looking for his blood pressure medicine.

I do have to say, though, that the most impressive ride was his Millville moto sans clutch lever. I was watching him very closely, and his corner speed and fluidity through the corners were incredible. He had no way to build RPM other than momentum. It was simply an awesome display of technique and resiliency.

Weigandt: The Glen Helen comeback was nuts, and I was especially impressed that Jeremy kept his cool while his team worked on the bike. But I'll put his first-moto charge at Utah right up there. This was a pressure-packed situation, and Martin was just ridiculous coming from about thirty-seventh to fourth and then snagging a gift for third. Had he merely charged to, say, eighth, which would have been amazing, he still would have lost a lot of points and also faced the "He blew that start under pressure while Marvin delivered a holeshot and a moto win." Instead, he made it clear that he'd go through any obstacle to win the title, and that had to be a nice shot of confidence during a stressful week.

3. Now Plessinger has a win. What's Bobby Reagan putting in the water there at Star Racing?

Matthes: There were so many missteps along the way for Star Yamaha that they caused more than a few people to wonder what was going on. Riders, mechanics, and managers went through the team like Def Leppard through groupies when Hysteria came out. And I was one of those guys making jokes and writing that they didn't look like they knew what they were doing.

When I was at Yamaha for three years, I would often ask my bosses where "our" Davi Millsaps’, Broc Heplers, Mike Alessis, and Ryan Villopotos were. Outside of Josh Hill, Yamaha's amateur superstars were non-existent. Oh, and the bike was virtually unchanged for ten years. It still had an oil tank and a carburetor when no one else's bike did.

But then, like the phoenix rising from the ashes, Yamaha, with a big hand from Donnie Luce, started developing amateur riders and supporting that end of the sport. Then this new bike came out that was badass and had an engine design that was perfect for air induction and horsepower. Jeremy Martin came from Suzuki, Cooper Webb from Honda, Aaron Plessinger was developed from within, and Yamaha was back!

But the bike and the riders wouldn't be as great as they are without the team. Star Yamaha merged with Valli for a year, realized that was a disaster, and got out of that as fast as they could. They then got Martin and Webb, the new bike, hired Steve Lamson, and tried to build something. And although it's taken a while, they've done it. They still have a higher mechanic turnover than I would like to see, but they've proven that they can deliver championships. Nice job by Bobby's guys and Yamaha as well.

JT: Down in Mississippi, they use a little something called "fire water" to liven up the festivities. Although probably not what the question inferred, I never like to pass up a bit of regional diction amongst friends. Seriously, though, Yamalube/Star Racing has turned the ship around in a big way. I can remember hearing some of the jaw-dropping salary numbers guys like Jake Weimer were turning down six or seven years ago to join this team. It's not that these riders hated money; it was just that they didn't feel like the team was ready to win championships. Well, that day has come and gone. The current team and motorcycle are more than capable as proven by Jeremy Martin's back-to-back national championships, and Webb’s supercross title. The team has Yamaha's full support, and with the updated machine last year, things have really turned around. With both Jeremy Martin and Cooper Webb returning for their final 250 seasons in 2016, Aaron Plessinger's arrival, and podium contender Alex Martin's addition, Yamalube/Star Racing has the competition feeling the blues.

Weigandt: This has to start with the bike. Yamaha only plays up its unique reversed-engine design as a way to centralize weight and improve handling, but it also helps deliver power, and that's so key in the 250F class.

The previous bike was really outdated, but that gifted Yamaha with some extra patience. They knew they would have to wait for the 2014 bike to win, so a few years earlier they told Star owner Bobby Reagan to focus on the future. Instead of going for pro wins, he went after Martin and Webb hard as amateurs and now he has the best 1-2 punch in the class. Bobby has always put his efforts on recruiting young talent, but this was the first time he ever got the absolute front-line guys, and got to put them on a bike this good. That's made all the difference.