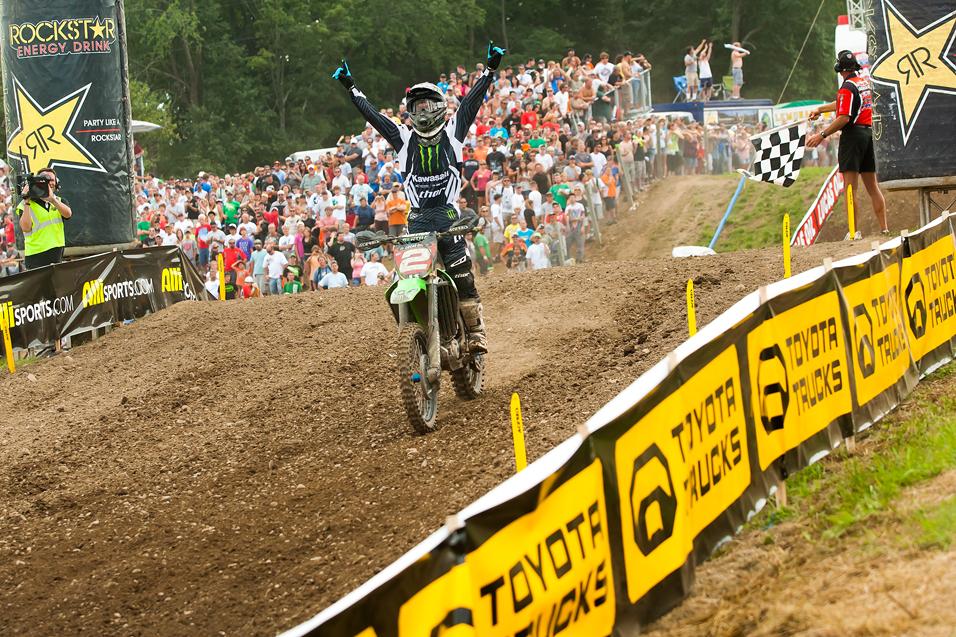 Where Ryan Dungey ended up—#10 yesterday—Ryan Villopoto was sure to be close, and he is: We have the four-time AMA Motocross Champion ranked #9 on our Monster Energy 40 Greatest AMA Motocrossers list. And like Dungey, the Monster Energy Kawasaki team captain is on the move forward as well. These two riders are now leading the way in American motocross, having claimed each of the last three 450 titles between them, and four straight 250 titles together ('06-'09) before that.

When Villopoto turned pro back in the summer of 2005, it was hard to gauge where he might end up. He was not a dominant minicyclist, often seeming to ride in the shadow of Mike Alessi. But as soon as RV turned pro, he began leapfrogging through the ranks against seasoned racers like Ivan Tedesco, Grant Langston, Josh Grant, the slightly older Alessi, and more. He reached the podium early in his career, with a runner-up finish in September '05 at the series finale—only his third professional race.

Villopoto, who hails from Washington, did not do so well in his first SX efforts on the Lites bike, but outdoors he was soon a dominant force in the 125 class. He won his first national at the third round of '06, then went on to take the title. He would repeat in 2007, holding off the spirited attacks of his new Monster Energy/Pro Circuit Kawasaki teammate Ben Townley. That season ended with the Motocross of Nations at Budds Creek, a race we don't often add into these assessments, but this time it's relevant for two reasons: It was a regular national track, and the ass-whipping he put on the rest of the world (while riding a 250F) was extraordinary.

In 2008 Villopoto would join a rare club of men who have won three straight AMA Motocross Championships in this class: Broc Glover, Mark Barnett, and Ricky Carmichael. He also signed a long-term deal with Kawasaki, which meant moving along another rider, 2008 AMA 450 Motocross #1 James Stewart, to make room for him in the premier class. It was a bold move for a team that had been grooming Stewart since 1994 as an amateur and then paying handsomely as a pro since 2002--plus, Stewart logged a perfect 24-0 season in his final days on green. But the brand bet on Villopoto for the future.

Villopoto's debut 450 tour did not go well, nor did his second in 2010, as injuries wrecked his chances after winning the first round and then dropping out after the second. But in 2011, after winning his first 450 SX title, Villopoto put in an exceptional summer to take the #1 plate away from Ryan Dungey, who by this point was right there with Villopoto on speed, but then had two mechanical issues. Dungey ran out of gas in Texas while leading, then missed the start of the second moto at Southwick when his electronics malfunctioned—both gifts for Villopoto.

The two Ryans teamed up for the summer-ending Motocross of Nations, famously riding across the finish line at the end of the last moto hand-in-hand.

RV won his second straight Monster Energy Supercross title in 2012 and then repeated just two weeks ago. But he hasn't ridden an outdoor national since Pala '11 due to his torn-up knee at the Seattle SX last April. As strong as his career has been, he has only logged one full season in the big class so far. He will now try to get his #1 outdoor plate back from Dungey, beginning with the Hangtown Classic next Saturday from Sacramento—the first of twelve rounds that could move one or both these guys way up on the Monster Energy 30 Greatest AMA Motocrossers list.

In the meantime, we have given the edge between Dungey and Villopoto to RV, based on his four titles to RD's three and Villopoto’s higher winning percentage—23 national wins in 52 career starts. Regardless, both are already among American motocross' all-time greats, and both have room to climb even higher. The most exciting part is thet they will most probably have to beat each other to keep climbing the ranks, and the battles are sure to be great.

You can check out all of Ryan Villopoto's results right here.

Villopoto won his first, and thus far only, 450 title in 2011.
Simon Cudby photo