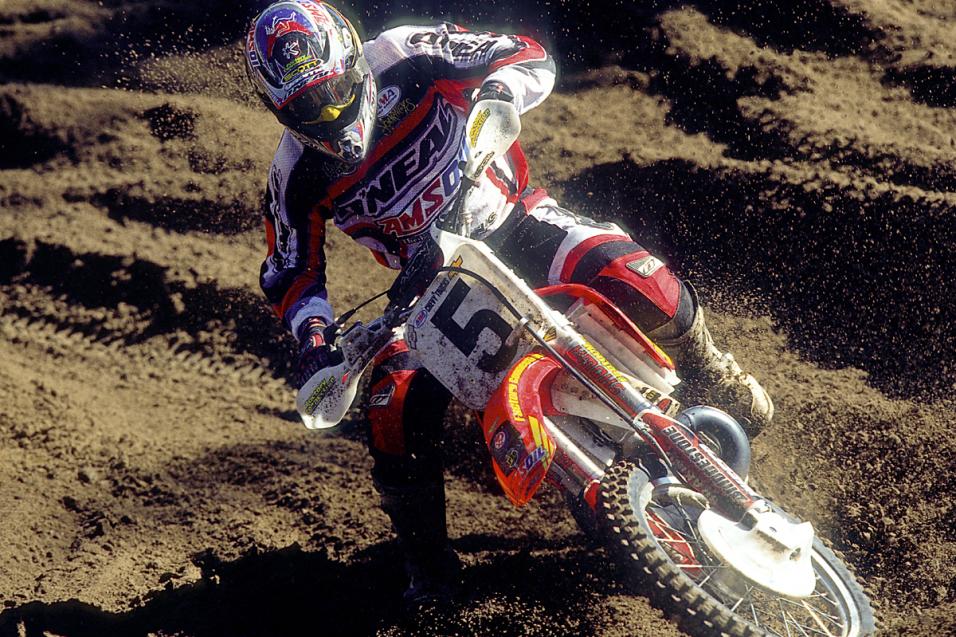 If there were a way to count the number of passes a rider made during his professional racing career, Mike LaRocco would no doubt be at the top of the list. A two-time AMA Motocross #1 (1994 250cc, '93 500cc) and the winner of twenty outdoor nationals spread over all three classes, The Rock lands at #17 on our Monster Energy list of the 30 Greatest AMA Motocross racers.

Mike LaRocco is one of American motocross' all-time working-class heroes. He came up out of the Midwest—Indiana, to be exact—and worked his way into a Yamaha support ride before he turned pro. Even as a teenager he was neither flashy nor a fast starter, but he was one of the strongest finishers the sport has ever seen. His first national was the 1987 Spring Creek National in Millville, Minnesota, where he finished twelfth.

Over the years LaRocco would work through the pro ranks, moving from Yamaha to a full factory ride at Suzuki and then Kawasaki. It was on the green bikes that he really hit his stride. First, he nearly won the 1992 125 National Championship, leading the points for most of the season until a bizarre run of bad luck—two separate bike problems in two motos on the same day cost him a ton of points and opened the door for Jeff Emig’s come-from-behind charge to the title. LaRocco would bounce back by winning two titles in consecutive years. As a matter of fact, LaRocco was America’s final 500cc Motocross Champion.

In 1995 LaRocco was hoping for a successful title defense in the 250 class, only to suffer a broken arm, which he had plated so he could return early … only to be derailed again by a knee injury at Millville, one race after a win at Unadilla. LaRocco switched back to Suzuki, where he had some flashes of brilliance but was never quite as fast as before his injuries. He also never really figured out his starting difficulties, which certainly cost him wins throughout his career, both outdoors and indoors.

After his deal with Suzuki ran out, LaRocco made a gutsy decision: He signed on with Factory Connection to be an independent rider, albeit with some help from American Honda. He then put his career into overtime (mind you, he’d already been at it for more than a decade) and stayed fast for several years before making the decision to race supercross only in hopes of extending his time as a professional racer.

By the time he retired in 2006, LaRocco had racked up the third-most podiums in history in the 450 class with fifty-three, plus sixteen previous ones from the 125cc class.

LaRocco is still very involved in the sport. In fact, he has two young riders under his watch on the GEICO Honda team who will be going for Monster Energy 250 Supercross Championships this weekend in Las Vegas in Wil Hahn and Eli Tomac. He's also the namesake of one of the most recognized obstacles in all of motocross, LaRocco's Leap at RedBud, his home track.

LaRocco's success over a large span of races and years, as well as his titles, wins and podiums, earn him the 17th spot on this list of Monster Energy's 30 Greatest AMA Motocrossers

Check out all of Mike LaRocco's results right here in the Racer X Vault:

From 1998, the early days of what we today know as team GEICO Honda.
Racer X Archives