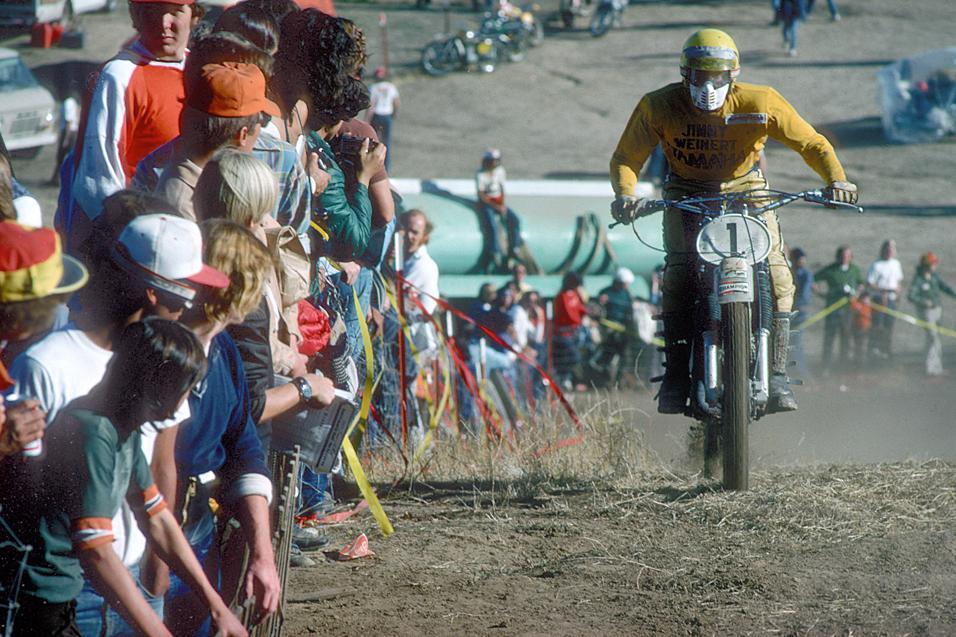 As we count down the Monster Energy 30 Greatest AMA Motocrossers of all time, we are getting down to the good stuff—or as the legendary Art Eckman might have said, “It's get-nervous time, David Bailey!” But that's not a clue to #23—we will be visiting Bailey a little while later. Instead, we're going a little further back to one of the original American motocross superstars, and not to mention an all-time character.

“Jammin'” Jimmy Weinert came racing out of Middletown, New York, just as American motocross was getting heated up. Like a lot of top guys back in the early seventies, he was incredibly versatile, racing everything from scrambles to flat track, depending on where the competition and the prize money took him. When the AMA National Motocross Championships were founded in 1972, he went nationwide with his racing, and he ended up second to Gary Jones in the final 250cc championship standings (he was also ranked seventh in the 500 class). The Jammer also took his first national win at Elkhorn, Wisconsin, home track of Racer X's own Scott Wallenberg.

In 1973 Weinert was picked up by the Kawasaki factory team, and while he did not win the AMA title, he did have a major breakthrough when he became the first American to win a Trans-AMA race against the Europeans, topping everyone in the mud of Rio Bravo, Texas.

In 1974 and '75 Weinert took the 500cc National Motocross Championship, topping his longtime friend and rival Tony DiStefano in '74 aboard a Kawasaki, then winning again the following year on a Yamaha. Weinert went back to Kawasaki in '76 and won his one and only AMA Supercross title, but outdoors, with his focus on the 250 class, he was beaten by his old rival DiStefano.

From 1977 on, the Jammer would deal with several issues in his career, from nagging knee and neck injuries to a lack of focus off the track—and ultimately younger, fastest competition in a new generation of fast guys led by Bob “Hurricane” Hannah, Broc Glover, Kent Howerton, Mark Barnett, and more. But the old man was still a vicious competitor, and he even finished fourth in the 1979 AMA 250cc National Motocross Championships. His last win would come in 1979 at the Daytona Supercross, even back then the closest thing to an outdoor track on the stadium tour.

Weinert's extensive career ended in 1980 on a Kolbe-sponsored Can-Am, of all things, and his last national finish was a tenth at the old Lakewood, Colorado, national track.

For his sixteen national wins, his two straight 250cc National Championships, his versatility, and his long and distinguished career on the circuit, Jimmy Weinert ranks #23 on our list of the 30 Greatest AMA Motocross racers of all time.

Here all of the Jammer's race results, both in SX and MX, going back in 1972.