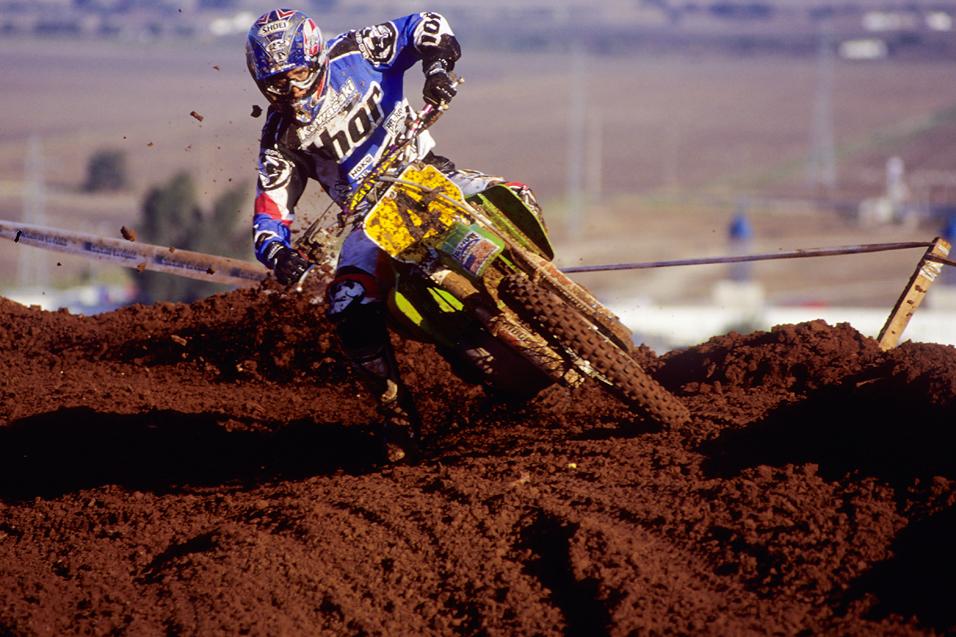 September 8, 2011 3:00pm
by: Jason Weigandt
While the 1986 Motocross des Nations effort of Ricky Johnson, David Bailey and Johnny O’Mara is often considered the greatest of all-time, the 1996 Team USA squad actually matched the ’86 performance. Steve Lamson, Jeremy McGrath and Jeff Emig won every moto in their class throughout the day en route to a dominant victory in Spain. Emig had a tough assignment, though, tabbed to ride the open class for 500cc two-strokes, even though he had never raced one before. He came through with the class victory. Here is his story.

Racer X: You and I were bench racing a few weeks ago about you riding a KX500 at the 1996 MXdN. And that’s always a strange part in history because for a few years, someone still had to ride a KX500 at the des Nations, but our AMA 500 National Championship stopped racing after the 1993 season. What was that like when you got the call to race the open class on that bike?
Jeff Emig: It wouldn’t have been that bad if the motorcycle had been a current bike! I believe the last update on that bike was in 1992 or 1993, and this was 1996. We didn’t race that class in the U.S. anymore after 1993, and I believe we tried to retrofit some new forks or a new shock to the bike, but, for the most part, it was the same bike with updated bold new graphics.

I’ve heard that they literally used the same exact KX500 every year for des Nations. They’d always have to have a Kawi guy race that class, and they would just tune up the same old KX500 and race it. Ryan Hughes, for example, raced it the year before.
I believe they had two bikes, one was a test and practice bike, and one was a race bike. But hey, when you only race it once a year, why not just keep on running it? We could probably just bust that thing out right now if we wanted to. 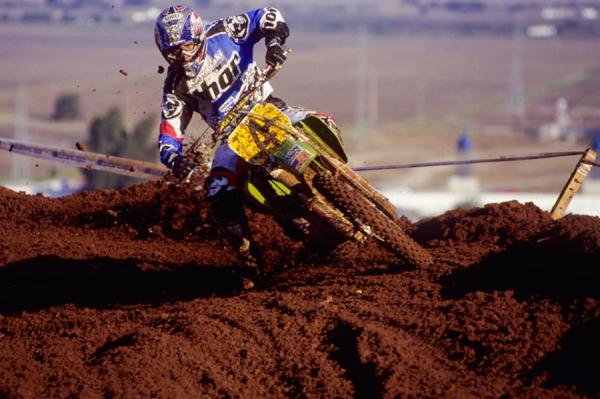 Yeah, I know that bike is still sitting there at the Kawi shop to this day! Did you have any experience racing that bike before this race?
No. None.

And you also weren’t even the first pick for the team?
That’s right, and I just realized that because I was reading an old article. Ryan Hughes had raced it in 1995, so they were going to have him just do it again, but as the story goes, he got hurt, and I was a logical replacement since I was also a Kawasaki rider. I had some pretty good races at the Motocross des Nations before, and I had a pretty good summer too, so I felt like I could handle it. [Note: A few weeks after the team was announced, Emig completed a comeback and won the 250 National Championship].

How much practice time did you get on the bike?
As little as I could! That thing vibrated so badly compared to our 250s, you wanted to ride it the least amount that you had to. And what’s interesting is, the horsepower, even though Kawasaki had done a great job smoothing out the power, it was still like a toggle switch. Just on or off. And if you overevved the thing, it would vibrate so badly that you could literally shake your hands right off the bars. That, and also how the weight balance felt on the chassis. The engine was very far forward, so it was very easy to spin the rear tire. When that toggle switch flipped up and the revs came up, that thing was all over the place! You really had to ride it a different way, just third and fourth gear the whole way. We had the big flywheel weight on it and everything to help that, but it was still a handful.

That race, in 1996, some of the Europeans called it Supercross des Nations because the track was very technical.
Yeah, well, they should have called it "Big Downhill Quad of Nations." There was this massive downhill quad jump that was really technical. I don’t remember the rest of the track being that technical, I remember it being pretty rough with lots of up and downhills. But that jump, it was big, and you couldn’t see the landing at all. And I remember that on that 500, with that toggle switch feel, I could accidentally overjump it very easily. Eventually, I was sort of coasting off the face of the jump, because you didn’t want that toggle switch power to kick in on the face of the takeoff. You couldn’t power off of it like a 250 or a 125. You’ve probably seen pictures of Lamson and McGrath on the 125 and 250 throwing tricks off of that jump, and then me just jumping absolutely straight. 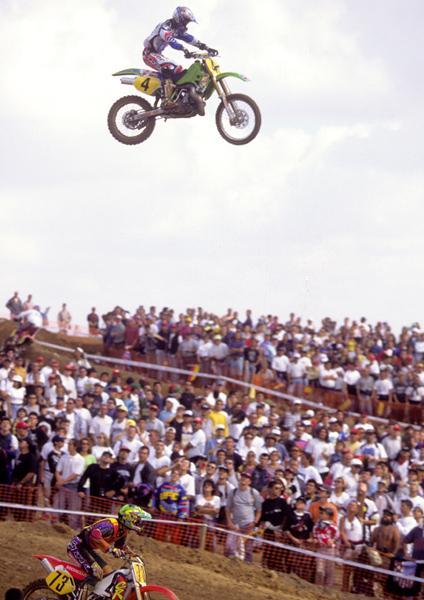 It was a clean sweep for Emig and the rest of the Americans at the '86 des Nations.
Photo: DC

That bike is like a museam piece, now, because the rules finally changed in 1997 and 250s became legal in both classes.
Yeah and like I said, I don’t think that bike I rode is much different than Jeff Ward’s last championship bike, which was in 1990!

Some will say the riders are back on open bikes now, because a 450 is so much faster than a 250 two stroke. And maybe on a dyno, peak power, a modern 450 and an old 500 two-stroke may match up. But is there any comparison to riding those old bikes and what is out today?
No, not even anywhere near that. It’s completely different. We’re talking close to 20 years of technology here. That bike took a different type of technique and style. Around that time, I was just turning pro, and most of the championship battles were between Honda and Kawasaki in that 500 class. Yamaha tried it a few times on their air cooled bikes, but they were at a disadvantage. So it was mostly between Honda and Kawasaki in that 500 class, and it always seemed like Kawasaki had a little advantage.

Well indeed they took four of the last five AMA 500 National Titles. By the way, you also once said at des Nations that Americans don’t get beat by four-strokes. Sorry man, technology caught up to you.
Oh man those four-strokes used to make me so mad! They had those Husabergs and stuff that had popped up in Europe. I was always pretty confident in my setup, but more often than not, when we got to the des Nations, the tracks were different, and my setup didn’t work there. The tracks were faster and we needed more top end, and in America our bikes were setup with all of that snap down low. So we always needed more top end on our 250s for that race. But I can tell you on that KX500 we had it all. Last gate pick? No problem. Lammy, you go ahead and take the good gate on the 125. You could grab the holeshot from any spot on that gate, that was not an issue. And at that race in Spain in 1996, I think that one was pretty easy for us. In the first moto, I had the lead, and Lamson and Sebastian Tortelli were behind me. I remember talking to Lamson before the race, and I told him he needed to beat Tortelli and show the world that he was the best 125 rider in the world. So I let them go by. I didn’t care what I did as long as I was the first 500. So I got a front row seat to this amazing battle between Lamson and Tortelli, and I was proud of Steve, he won it. We ended up dominating that race, 1996 rivaled that legendary 1986 team you always hear about as far as our results. I’d like to say that year was a massive struggle and we overcame all the odds and barely pulled it off with all of this drama, but that day, we pretty much dominated it and it wasn’t too much of a struggle. It helped that I had that trusty KX500, it was a handful to ride, but still, it was the best 500 out there.